Development of children is a complex process that continues over a significant period of time of human life and a multitude of factors affect this process. Temperament is one such factor identified in literature and considered to be one of the most significant intrapersonal factors influencing human functioning. 1,2 Temperament refers to traits displaying particular behavioural predispositions. These tendencies are relatively stable and biological in nature. One significant model of temperament defined it as individual differences in attentional, motor and emotional reactivity measured by recovery of response, intensity, latency and self-regulation processes like effortful control that modulate reactivity.1 Temperament's basic biological processes can be shared across cultures but outcomes may vary depending on the child's experiences and cultural values 3. Literature provides ample evidence that temperament co-determines typical and atypical functioning in humans. 1,3 This heightened the interest of clinicians and researchers to study the role of temperament in different developmental disabilities. Autism Spectrum disorder (ASD) is considered one of the most common developmental disabilities influencing the course of normal development in children and adolescents 4,5 with marked problems in social, communication and adaptive functioning. 6  According to a recent report of World Health Organisation (WHO), 7 ASD affects one child in every 160 children and the prevalence has increased globally in the past 15 years. 8  ASD is believed to have enormous social cost as it influences not only the life of sufferers, but also disrupt the functioning of a family and society in general. 9  Therefore, professionals become more interested in factors directly influencing the children with ASD. Many researchers have identified temperament as a variable significantly affecting the typical development along as well as course and prognosis of ASD. 10 Although researchers in western countries are studying temperament in varied populations, there is dearth of research in this particular area in Pakistan. Identifying the gap in knowledge related to temperament, the current study was planned as an attempt to provide some significant information regarding this pertinent area of functioning in the local context by assessing the pattern of temperament of ASD children to identify the temperament trait most prominent in this specific group and to explore gender differences in temperament profiles of the sample.

The cross-sectional study was conducted in Lahore, Pakistan, from February 2015 to June 2016, and comprised children of either gender aged 5-11 years diagnosed with ASD who were selected from different centres in the city. The sample size was calculated through g power analysis with medium effect size and significance level of 0.05. 11  Non-probability purposive sampling technique was employed to select the sample. The clinical diagnosis of ASD was given by a team comprising senior clinical psychologist and developmental paediatrician or child psychiatrist. It was based on syndrome-specific assessment and detailed developmental profiling conducted through standardised instruments by trained professionals and used in the presence of a reliable informant. Those outside the 5-11 years age range were excluded and so were those with no or incomplete assessment profiles, clinically significant emotional problems or comorbid developmental psychopathologies, and absence of informant. A self-generated detailed demographic questionnaire was completed for all participants to get complete personal information of the child and his/ her family. Urdu version of Children's Behaviour Questionnaire — Teacher Short Form (CBQ-T) assessing three broader Big Five Personality Model 12  domains and 17 temperamental dimensions was used for subjects aged 5-7 years. 13  CBQ-T Urdu revealed strong psychometric characteristics with reliability indices ranging from 0.45 to 0.93. The standardised Urdu version of Temperament in Middle Childhood Questionnaire (TMCQ) assessing 15 sub-temperamental dimensions grouped into three broader domains of Big Five Personality Model was used 14  to assess the temperament of children aged 8-11 years. The reliability indices of TMCQ Urdu ranged from 0.59 to 0.96 and validity indices ranged from 0.37 to 0.81. 15  Urdu versions of these two instruments were reviewed for content equivalence and approved by the original authors for excellent content adequacy and technical indices. The sample was approached in different developmental paediatric departments, child psychiatry departments and special education institutions of Lahore city, including Mayo Hospital, Services Hospital, Dimensions, Shadab Institute of Special Education, Amin Maktab and Rising Sun. After obtaining permission from the relevant authorities and consent from parents of the subjects, personal case files of the children seeking professional services for developmental psychopathologies were thoroughly reviewed to select the sample in the light of the inclusion criteria mentioned above. Relevant details of assessment like intelligence quotient (IQ), presence of significant behavioural problems, autism severity measured through scores on Childhood Autism Rating Scale (CARS), nature and duration of professional service utilisation etc., were noted on the demographic questionnaire. In-depth individual interviews were conducted with the caregivers to complete the temperament questionnaires. Also, caregivers were offered a free debriefing session on a voluntary basis. Data was analysed using SPSS 20 by employing descriptive statistics that were expressed as frequencies, percentages, measures of central tendency and measures of variability. Inferential statistics were used to assess the mean score differences across gender. Pearson product moment correlation was carried out to analyse the association of temperament with intelligence, behavioural problems, paternal education and marital status, family system etc. 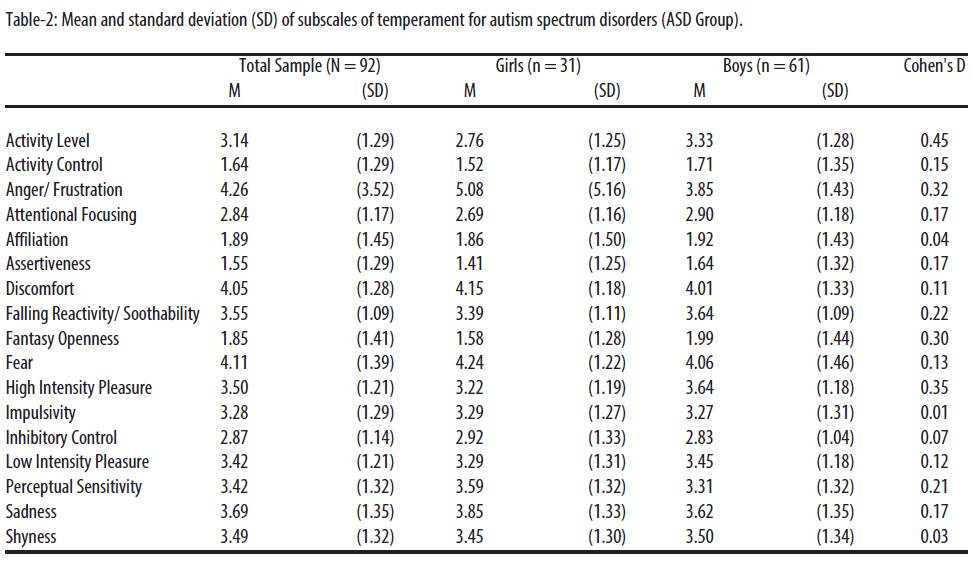 Temperament is considered a significant intrapersonal factor affecting human functioning which gets influenced by multitude of psychological variables. The present study was an attempt to explore the pattern of temperament and variables related to it among children with ASD. Majority of the sample comprised boys reflecting the general trend of ASD, indicating that the disorder is relatively more prevalent among boys compared to girls. 6  The temperamental scores revealed that surgency and effortful control domains of temperament had significant positive association with each other but showed inverse relationship with negative affectivity, this finding is in line with literature. 16  Temperament profiling revealed that participants scored highest on negative affectivity domain and lowest on effortful control. This finding is consistent with previous studies. 10  Studies have reported that negative affectivity domain generally remains high among children and individuals with clinically significant problems. 17 The reason might be that this particular temperament domain comprises dimensions like fear, sadness, frustration and aggression that are usually high among clinical populations, including ASD. On the other hand, individuals with ASD also have significant problems in maintaining attention and focus and they find developing inhibitory control difficult which are primary traits composing effortful control domain. The domain of surgency involved activities like social participation and high-intensity pleasure activities which are generally problematic for many ASD children. 18 18 The present study is unique in that it not only explored the temperament of children with ASD but also assessed the relationship of temperament with personal and familial factors. Studies have concluded that symptom trajectories of ASD tend to vary according to variability of scores in temperamental domains and fewer symptoms predicted high scores in effortful control. 18  Therefore, present research assessed the degree of relatedness between temperament domains and autism severity and history of significant behavioural problems. There was a positive relationship between the presence of clinically significant behavioural problems and autism symptoms severity. The findings also revealed that children with high autism severity score were more likely to score high on negative affectivity and scored lower on both surgency and effortful control domains which is comparable to earlier results. 19  This finding converges with conclusions of other researchers reporting significant positive relationship between these two variables and negative affectivity 18  and that behavioural problems and autism symptoms collectively accounted for significant variance in negative affectivity. 10  Gender in the current study failed to account for any significant mean differences in temperamental domains. This is consistent with findings of other studies reporting relative gender variances in temperament domains, but no significant gender differences in temperamental profiles among autistic population.19,21,22 The present study considered intellectual functioning as an important variable. IQ shared inverse association with behavioural problems, autism severity and negative affectivity domain of temperament. This finding is in line with literature.23,24 As children and individuals with below-average intellectual functioning were observed to have poor problem-solving and judgment, therefore,  poor coping skills and significant lag of functional skillsare consequently more likely to have high incidents of externalised and internalised behavioural problems. The findings are also supported by a study. 25  It is generally reported that early behavioural tendencies developed directly in relation to parental responsivity and parental behaviours, particularly stress. 26  In the current study children living in single parental units had high scores on negative affectivity and low scores on positive temperament domains like surgency, which is in line with an earlier study. 27  Probably it is due to the fact that singleparent units are considered more vulnerable to stress and children are more likely to have low parental guidance and attention which along with the developmental problems might have made children adopt more negative temperamental traits. A study 28  also reported, children living in single-parent units had more behavioural problems compared to those living in intact families. The current study has few limitations, including the sample which predominantly had male participants. Besides, the data was only collected from one city. Future studies should collect gender-compatible data from other provinces of the country as well to take into account cultural variations.

Disclaimer: The study is part of a broader PhD research.

Conflict of Interests: None.

control as modifier of the association between negative emotionality and adolescents' mental health problems. DevPsychopathol. 2007; 19:523-39.

Moderating effects of neurocognitive abilities on the relationship between temperament and global functioning. Child Neuropsychol. 2010;16:20-31.