The forearm is a complex anatomic structure serving an integral role in upper-extremity function.1 The forearm plays an important role in positioning of the hand in space by flexion and extension of the elbow and wrist aswell as pronation and supination through the proximal and distal radioulnar joints. 2 The relationship between the radius and ulna in the forearm is critical for function, especially pronation and supination. This relationship is so critical that the forearm has been called a "functional joint." 3 Thus, slight deviations in the spatial orientation of the radius and ulna will significantly decrease the forearm's rotational amplitude and thereby impair the positioning and function of the hand. 4 The average yearly incidence in adults has been reported to be 1.35 per 10,000 population, ranging from 0 to 4 per 10,000 population depending on age and gender. Above the age of 20, the yearly incidence of forearm shaft fractures remains below 2 per 10,000 people, predominating in males throughout all age groups.5,6 Motor vehicle accidents account for an important fraction of forearm shaft fractures. It is estimated that 4% of restrained front seat passengers involved in a motor vehicle collision suffer a fracture of the upper extremity. .6,7Low-energy trauma, like falling from standing height in osteoporotic patients, high-energy trauma, like direct blow or that sustaining in road traffic accident (RTA), are the main causes of diaphyseal fracture of radius and ulna.8 Fire arm injury (FAI) and sports injury are also frequent causes.Inadequate treatment of diaphyseal fracture of the forearm is associated with significant limitation of motion in forearm. Shaft fractures of both forearm bones (SFBFBs) displace in direction depending on the direction of the force applied externally. However, the level of fracture with respect to the muscular attachment on radius also dictates the radial fracture displacement. Restoring length of bones, rotational alignment, radial bow, and interosseous distance between the two bones are the main aim while treating SFBFB fracture to restore its function.9-11 Rapid healing and the ability to remodel with growth allow conservative management of forearm fractures in children. However, same is not the case in adult with forearm fracture. It is difficult to achieve and almost impossible to maintain the anatomic reduction by closed means. 12  For an optimal result, the basic rule is that a stable anatomic reduction with preservation of mobility must be achieved. 1  Currently, open reduction and internal fixation (ORIF) with Dynamic Compressing Plate (DCP) for the treatment of diaphyseal forearm fractures in adults is the most commonly used technique and is generally accepted as the gold standard treatment.13,14 Further, before Arbeitsgeme in schaftfur Osteosynthesefragen (AO) DCP, other fixation techniques of these fractures were described, such as intramedullary (IM) Kwire fixation,15 IM nailing,16-18 and external fixation. 19  They are still relevant today, but they have been demonstrated to be successful only in restricted cases, with a high rate of nonunions and additional need of plaster casting. 20 However, the disadvantages of plate fixation include a relatively larger skin incision, interruption of bloody supply due to wide periosteal stripping of the forearm bone, or re-fracture following plate removal. 2  Additionally, this method has some limitations in SFBFBs with extensive soft tissue damage, severe swelling, open fracture, segmental fracture, or a limited operation time due to associated injuries. In order to overcome these problems, IM nail fixation can be used as an alternative method for overcoming these limitations while treating SFBFBs.17,21 The current study was planned to compare the outcome of Rush IM pins with gold standard 22 DCP (plate osteosynthesis) in diaphyseal fracture of radius and ulna in adults.

The randomised control study was conducted at the Department of Orthopaedic Surgery and Traumatology, Unit-II, Mayo Hospital, Lahore, Pakistan, from December 2012 to December 2015 and comprised patients between 15-45 years of either gender with closed fracture of diaphysis (proximal/middle/distal third) of either radius or ulna or both which were not open, pathological fracture and were not associated with any primary complications. These subjects were divided randomly by computer random sequence generation into two groups. The sample size was calculated in the light of literature 14  (Annexure). 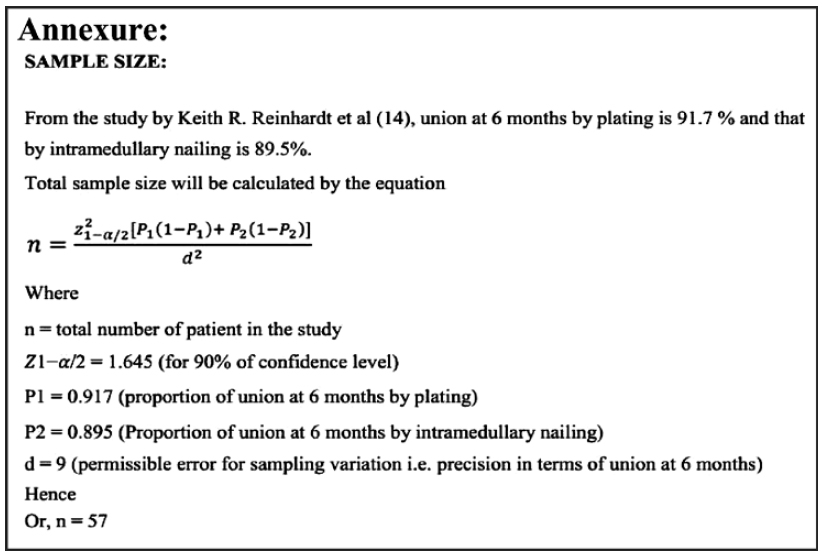 Baseline preoperative investigation was done to look for the general health status of the patient and anteroposterior (AP) and lateral views of the involved forearm with elbow and wrist joint was obtained. Written informed consent stating their participation in the study into a particular treatment group was taken from all the subjects, and approval was obtained from the institutional review board. Groups A and B were subjected to different treatment options (Figures-1,2). 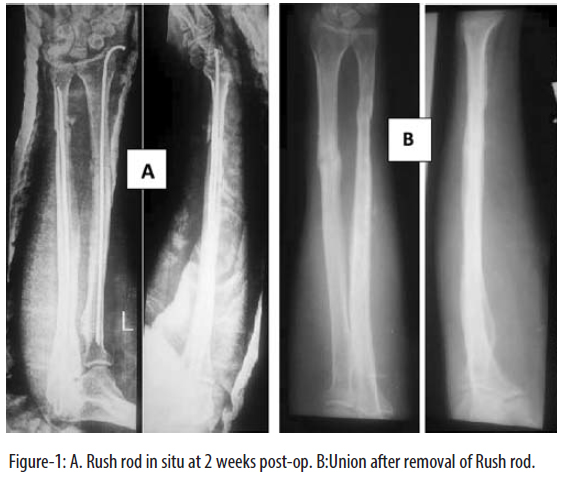 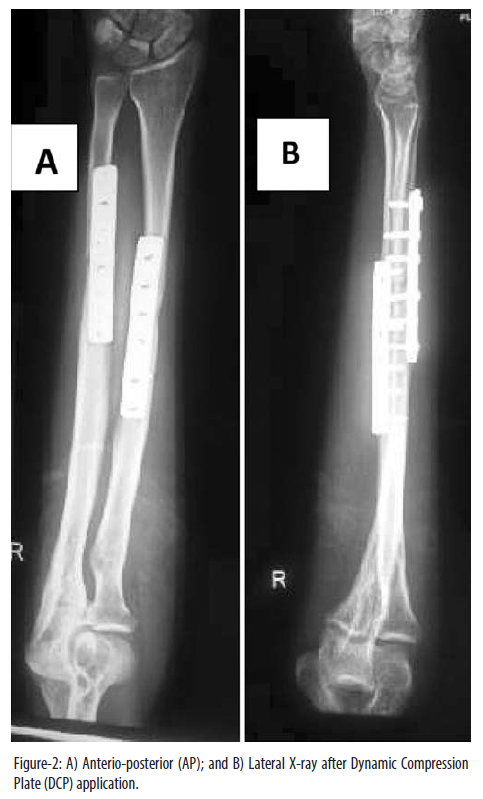 Patients were managed with open reduction and internal fixation (ORIF). Separate incisions were used for radius ulna where the radius was exposed through Henry's incision 23  while the ulna was exposed through its subcutaneous border. Patients in group B were managed with closed reduction and internal fixation (CRIF) using Rush pin under GA under fluoroscopy guidance and was immobilized postoperatively by above-elbow cast. The pinning of radius was done through the radial styloid process and through olecranon process in of ulna under C-arm guidance. A long arm back slab to provide rotational stability was applied postoperatively which was converted long arm cast on 14th day postoperatively. Both the procedures were done under GA in supine position on the operating table. For Rush pinning 24  the shoulder was abducted and the elbow flexed 900 for the nailing of the ulna, whereas for radius, the arm was extended while making entry into the bone. Traction was applied to reduce the fragments. A 1cm incision at olecranon tip was made deep to the bone. Entry was made with a curved awl. The position of the awl was checked under C-arm in the AP and lateral views. An ulnar nail of appropriate size (80% of medullary canal) was selected and passed into the ulnar canal while maintaining traction and reduction. Nail was hammered lightly in the end to jam it in the distal end of ulna. The end of the nail was buried just flushed to the olecranon. Radial entry point was made just ulnar to the styloid process using a curved awl under C-arm control. A radius nail of size 2cm smaller than ulna was selected and bent at the tip. Reduction is done by traction and manipulation and rush nail is guided into proximal fragment. The position of the nail was checked under C-arm in both planes during the procedure. The most stable fracture was fixed first. Patients were immobilised in an aboveelbow slab and asked to perform active finger movements. For DCP, 25  standard Henry's approach for radius and subcutaneous approach for ulna was used for DCP with engagement of 6 cortices on either side of fracture. No back slab was used postoperatively. Patients were evaluated in outdoor department with PA and lateral radiographs taken at 2nd and 6th week and then at 3rd, 6th, 9th and 12 monthly. The movement of elbow along with pronation and supination was started depending on the degree of fracture healing. The patients from these two groups were followed up till 12 months postoperatively. Their functional outcome was evaluated using Disability of the Arm, Shoulder and Hand(DASH) score 26  and Grace-Eversmann criteria 27  at the end of thefollow-up. Also, Orthopaedic Trauma Association (OTA) 28  fracture type distribution, amount of blood loss, surgery time, time to union and frequency of union were compared between the groups. All information was collected on a pre-designed proforma, and data was analysed using SPSS 20. Qualitative variables, like gender, postoperative complication, frequency of union, fracture type and Grace-Eversmann criteria, were presented as frequencies and percentages. Quantitative variables, like age, average operating time, time of union, range of motion and DASH score, were presented as mean and standard deviation (SD). Chi square test and odds ratio (OR) with 95% confidence interval (CI) was calculated to find out effectiveness of this two different modalities of treatment.

No patient (0%) had deep infection, synostosis, plate fracture, compartment syndrome, or iatrogenic neurological or vascular damage. No patient had persistent postoperative pain at the end of follow-up. Superficial infection occurred in 2(6.6%) patients in group A and 4(13.3%) patients in group B, and all of them recovered with local wound care and antibiotic treatment.

Internal fixation with plate is the commonly used method of treatment for forearm fractures. Different studies have shown good to excellent results with frequency of unionranging from 96% to 98% with 85% satisfactory results;29 97% union and 80% satisfactory function;13 and 98% frequency of union and 93% patient satisfaction.30 A retrospective study of acute fractures of diaphysis of ulna and radius in adults treated with IM nailing reported that union occurred in 66(94%) fractures. The average union time was 73 days. There were no delayed unions. Non-union was seen in 4(6%) cases. The average time in the cast was 7.9 weeks. No postoperative infection was noted. The overall success rate was 83%. No failure of fixation or material breakage was seen in the study.31Rush brothers had propagated the concept of three-point fixation in nailing long bone fractures. The flexible Rush pins maintain the radial curve, thus imparting stability by three-point fixation. However, the thin nail does not control rotation of the fracture. The concept of radial bow maintenance was subsequently put forth.32,33 A study31 reported 94% frequency of union with the pre-bent radial nail which maintains the radial bow. In a study34 in which management of diaphyseal fracture of radius and ulna was done in 20 adults with IM rods, 70% patients showed excellent result, 20% good results and 10% satisfactory result, according to Grace and Eversmann criteria. The study concluded that good functional outcome can be achieved with IM rods when used for the management of diaphyseal fracture of forearm bones.30 Many advocated advantages of closed nailing are low infection rate, smaller incision and scars, small amount of blood loss, and relatively shorter operating time. Also IM implants cause secondary periosteal callus formation because of their stress-sharing behaviour.29 We achieved union in 28 out of 30 patients (93.3%) compared to a study reporting 93% frequency of union with the use of IM nails in forearm fixation.35 Two cases in our series had non-union; which was managed with ORIF with DCP with bone graft, and union was achieved at 3- month follow-up. The cause of non-union was distraction at the fracture site. In a study, the mean surgery time was 65 minutes using plate and screw fixation while it took 61 minutes with IM nailing (p>0.05). The mean union time was 14 weeks in plate and screw group, while it was 10 weeks in that managed with nailing (p<0.05). According to Grace- Eversmann criteria, there were excellent or good results in 18(81.8%) patients and acceptable results in 4(18.2%) treated with plate screw fixation. There were 18(90%) patients with excellent and good result and 2(10%) patients had acceptable results in those treated with IM nailing. Mean DASH scores between the two groups were15 and 13 respectively. The two groups did not differ significantly with respect to Grace-Eversmann criteria and DASH scores (p>0.05).17 These results were comparable to those noted by the current study. The union time in IM technique is low because of the principle that unopened fracture haematoma favours early union. The current study's limitations included a short-term follow-up and a lack of blinding. Studies with long-term follow-up and blinding are recommended to validate the findings.

5. Alffram PA, Bauer GC. Epidemiology of fractures of the forearm. A biomechanical investigation of bone strength. J Bone Joint Surg Am. 1962;44-a:105-14.

6. Streubel PN. Diaphyseal Fractures of the Radius and Ulna. In:

10. Matthews LS, Kaufer H, Garver D, Sonstegard D. The effect on supination-pronation of angular malalignment of fractures of both bones of the forearm. J Bone Joint Surg Am .1982; 64:14-7.

17. Ozkaya U, Kilic A, Ozdogan U, Beng K, Kabukcuoglu Y. Comparison between locked intramedullary nailing and plate osteosynthesis in the management of adult forearm fractures.2009;43:14-20.

32. Schemitsch EH, Richards RR. The effect of malunion on functional outcome after plate fixation of fractures of both bones of the forearm in adults. J Bone Joint Surg Am. 1992; 74:1068-78.