Objective: To determine the association of matrix metalloproteinase-9 gene with the onset of atherosclerosis in Pakistani population of Punjabi origin.
Methods: The case-control study was conducted from September 2015 to December 2016 at the Government College University, Lahore, Pakistan, and comprised atherosclerosis cases from the Punjab Institute of Cardiology, Lahore, as well as healthy controls. Single nucleotide polymorphismsrs3918242 (Sph1), rs17577 (Sty1) and rs2274756 (Taq1) were selected from the matrix metalloproteinase-9 gene for allelic and genotypic analysis. Direct sequencing and polymerase chain reaction-restriction fragment length polymorphism were performed for genotypic analysis.
Results: Of the 201 subjects, 100(49.8%) were controls and 101(50.2%) were cases. There were 75(75%) males among the controls and 70(69.3%) among the cases. Overall mean age of the controls was 47.3}13.1 years, and that of the cases was 59.2}10.2 years. Positive family history was a significant factor risk for atherosclerosis (p<0.05). Allele T and genotype CT and TT of rs3918242 were more frequent in the cases (p<0.05). Change in nucleotide at Sph1 site led towards -1562C >T polymorphism. The frequency of 'A' allele and 'GA' genotype for rs17577 was significantly higher in the cases (Sty1) (p<0.05). No association was detected between rs2274756 (Taq1) and atherosclerosis (p> 0.05). The co-expression of rs17577 and rs2274756 was significantly related with the onset of atherosclerosis (p<0.05). Haplotypes CAG, TAG and TGG were significantly involved in causing atherosclerosis (p<0.05) whereas CGG was protective against atherosclerosis in this population (p<0.05).
Conclusion: Matrix metalloproteinase-9 gene was identified as a susceptible gene for the onset of atherosclerosis in Pakistani population of Punjabi origin.
Keywords: Atherosclerosis, Matrix metalloproteinase-9, Single nucleotide polymorphism, PCR-RFLP, Pakistani population. (JPMA 69: 1416; 2019). doi : 10.5455/JPMA.300814

Matrix metalloproteinases (MMP) are zinc-dependent endo-peptidases, which are responsible for tissue reconstruction and physiological processes.1 MMPs consist of 25 family members and on the basis of substrate specificities they can be divided into five different groups: stromelysins, collagenases, matrilysins, gelatinases, and membrane type. 2 Gelatinases group consists of gelatinase A (MMP2) and gelatinase B (MMP9). This group endures the denatured collagens and gelatins. 3 MMP9, initially known as 92-kDa type IV gelatinase B, is present on chromosome 20 in humans. MMP9 gets expressed between 16 to18 days of embryogenesis and exhibits in growing cardiac tissue in humans. 4 It is significant in immune cell functions and consists of enzymes which are required for the modulation of extracellular matrix (ECM) during embryonic progression, maturation, and tissue processing. 5 MMP9 gets up-regulated during growth and curing of injury, inflammation responses, cancer, diabetes and arthritis.6,7 The proteolytic characteristics of MMP9 increase the response of immune system to stimulate disease onset. 8 MMP9 increases abruptly during various cardiac diseases, like hypertension (HTN), atherosclerosis, and myocardial infarction (MI). At transcriptional level, MMP9 gene gets regulated by the response of promoter to various cytokines and growth factors. 9 Atherosclerosis is the main cause of stroke morbidity and mortality. Atherosclerosis involves the development of adipose tissue, cholesterol and other contents in and on artery walls that are commonly known as atherosclerotic plaques and restrains the flow of blood. Plaques may break, activating a blood clot. 10 Genetic polymorphism is a state of discontinuous variation that genetically divides the individuals of a population into two or more sharply distinct forms. 11 A large number of operational mutations are present in MMP9 gene promoter which cause disease onset. 12 In the coding regions, promoters and untranslated regions of MMP9, many single nucleotide polymorphisms (SNPs) are found. Of these polymorphisms, the commonly observed polymorphism in promoter region is — 1562C>T polymorphism, and in codon region it is R279Q polymorphism. 13 Allele-specific effect of — 1562C>T polymorphism is found on MMP9 transcription. This C/T variant shows an enlarged functionality of promoter in the T allele and promotes occurrence of atherosclerosis, myocardial ischaemia and aortic aneurysm at abdominal level. Codon R279Q polymorphism is present in the domain that is fibronectin type II, and may induce an amino acid replacement arginine [R] to glutamine [Q]) within catalytic domain that probably steps up substrate tying. The substitution of amino acid is connected to R279Q polymorphism, and influences the action of MMP9. 14 The current study was planned to identify the SNPs in MMP9 gene which can be correlated to the onset of atherosclerosis.

The case-control study was conducted from September2015 to December 2016at the Government College University (GCU), Lahore, Pakistan, and comprised atherosclerosis cases from the Punjab Institute of Cardiology, Lahore, as well as healthy controls who did not show any symptoms of cardiac abnormalities and were not suffering from any major illness. The cases had been diagnosed by specialist cardio-surgeons based on blood tests and electrocardiograms (ECGs). Those with incomplete diagnostics and self-reported cases were excluded. After approval was obtained from the institutional ethics committee, the subjects were investigated for environmental and demographic data, like age, body mass index (BMI) and disease management etc. For blood collection, 5cc syringes (BD, USA) and ethylenediaminetetra acetic acid (EDTA)-coated tubes (Atlas-Medo-O-Vac Francisco Vacuum tubes) were used. The genomic deoxyribonucleic acid (DNA) was extracted by organic extraction method as described in the laboratory manual. 15 The presence of DNA in the extracted blood samples was confirmed by the gel electrophoresis and then quantified on Nanodrop (NanoDrop 2000, Thermoscientific). Three SNPs of MMP9 were selected on the basis of their role in causing coronary ischaemic heart disease using information from the literature. The sequence of primers used was noted (Table-1)

and PCR was performed in 15μl volume containing 100ng of DNA template, 8μl of DreamTaq Green polymerase chain reaction (PCR) mastermix (Thermofisher, K1081), 1μl of10pM primers and variable amount of diethyl pyrocarbonate (DEPC) water. The reaction conditions were as follows: initial denaturation at 95°C for 1 minute followed by 30 cycles of denaturation at 95°C for 30 seconds, annealing at 63°C (rs3918242), 60°C (rs17577) and 63.5°C (rs2274756) for 30 seconds and extension at 72°C for 1 minute. The final extension was at 72°C for 10 minutes. MMP9 single nucleotide substitution at positions rs3918242 (Sph1), rs17577 (Sty1) and rs2274756 (Taq1) was checked by PCR-restriction fragment length polymorphism (RFLP). For PCR-RFLP of rs3918242, rs17577 and rs2274756, the enzymes Sph1, Sty1 and Taq1 were used respectively. The reaction was carried out at 37°C overnight and was visualised on 2% agarose gel for the detection of required fragments. For 30% of the samples, the DNA sequencing was done for the confirmation of RFLP results. The sequencing results were analysed for the presence of SNPs using the BLAST (https://blast.ncbi.nlm.nih.gov/Blast.cgi) and ClustalW2 (https://www.ebi.ac.uk/Tools/msa/clustalw2/) tools. Demographic data was presented using frequencies and percentages, and to evaluate the significance, t-test was applied. Allelic frequency was calculated using Chi square. 16  All Control data for polymorphism studies was passed from Genepop on the web for Hardy Weinberg Equilibrium (HWE) (p>0.05). SHEsis, 17  a web-based platform for analyses of linkage disequilibrium, haplotype construction, and genetic associations at polymorphism loci, was also used to carry out data analysis. BMI was calculated according to the criteria described for Asian countries by the World Health Organisation (WHO). 18

The genetic polymorphism association of atherosclerosis was noted (Table-3),

and so was done with allelic and genomic frequencies (Table-4). 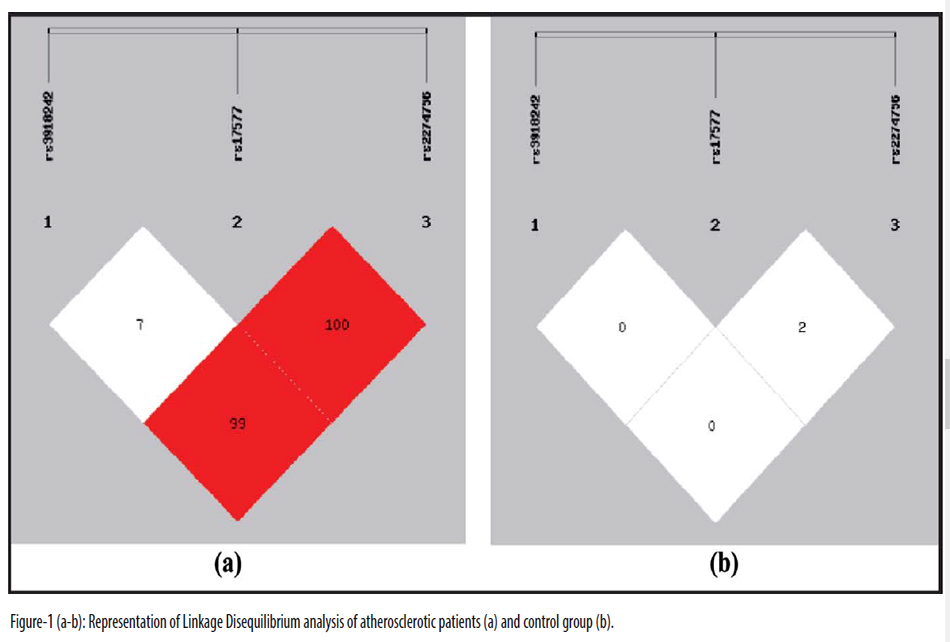 To the best of our knowledge, the current study is the first to learn the genetic association of MMP9 variants with atherosclerosis in Pakistani population. The study determined that the co-expression of rs17577 and rs2274756 was associated with coronary artery disease onset in Pakistani population. The rs3918242 (Sph1) was frequently different in both the patients and the controls regarding alleles as presence of 'T' allele was observed in atherosclerotic patients with allelic and genotypic effect, indicating -1562C>T polymorphism. 19  Similarly, 1562C>T polymorphism special allelic effect was reported by another study on MMP9 gene transcription, where CT/TT genotypes of - 1562 mutations were closely linked to developing atherosclerosis, and it demonstrated allele that 'T' bearers were more susceptible in the maturation of coronary aneurysm. 20  A study conducted on tissues of aorta reported that messenger ribonucleic acid (mRNA), protein and activity of MMP9 were higher in -1562C>T allele possessing individuals than in non-bearers. These reports proposed that the polymorphism -1562C>T were not only involved in in-vitro experiments of MMP9 promoter activity, but also had effect on in-vivo transcription of MMP9, and this reflection was transformed into differences at protein level of MMP9. 14  A study 21  also evaluated individuals with MMP9 gene -1562C>T polymorphism and reported that they had an elevated cardiovascular death rate than non-bearers. Lately, another study22  suggested that CT/TT -1562 genotypes contributed to coronary artery disease in diabetes and MI in Chinese population. There was an essentially high risk of the MMP9 polymorphism of -1562C>T in the acute MI sufferers than in healthy individuals (27.6% vs. 17.9%, p=0.04). These conclusions proposed that the polymorphism of -1562C>T in the promoter of MMP9 is greatly affiliated with acute MI. 19  The present study explained that rs2274756 (Taq1) and rs17577 (Sty1) were in significant association with atherosclerosis onset. In a study of Chinese Han population, the T-allele of rs3918242 was found to be associated with coronary artery disease (CAD). The serum MMP9 levels were observed significantly higher in subjects carrying T-allele. 23 MMP9 -1562C/T polymorphism was related to CAD and associated with high levels of serum MMP9. Moreover, the T allele probably altered MMP9 regulation. 24  Similarly, in Taiwanese population, 6 SNPs relevant to MMP9 were observed; and mutations, rs2274756-AA and rs3918242-TT, which were approximately in disequilibrium of linkage phenomenon, were correlated to increased values of MMP9 (p=0.008 and p= 0.007). The AA genotypes of rs2274756 and TT genotypes of rs3918242 genotypes, teenage, elevated plasma glucose during fasting, and fibrinogen quantities were associated with increased MMP9 serum quantities in population of Taiwan. 25   According to Haplotype analysis, CAG, TAG and TGG genotypes were significantly associated with onset of atherosclerosis as the frequency of these haplotypes in control subjects were less than the patients (p<0.05). The frequency of CGG genotype in controls was more than the patient's frequency and, hence, this genotype was protective factor against disease development. Pakistan is a multicultural country with certain traditions, one of which is consanguineous marriage or cousin marriages. Due to the narrowing of the gene pool with fewer genetic re-combinations, genetic disorders can frequently transform from one generation to the next.

Disclaimer: The manuscript was partially presented as an Oral Abstract at the Third International Conference on Bioscience held in Lahore, Pakistan, from April 9 to 11, 2018.

18. WHO EC. Appropriate body-mass index for Asian populations and its implications for policy and intervention strategies. Lancet (London, England) 2004;363:157.

24. Opstad TB, Arnesen H, Pettersen AA, Seljeflot I. The MMP-9-1562 C/T polymorphism in the presence of metabolic syndrome increases the risk of clinical events in patients with coronary arterydisease. PLoS One 2014;9:e106816.