A typical presentation of dengue fever in a G6PD deficient patient: A case report

Dengue is a mosquito-borne viral disease that has rapidly spread in the recent years, particularly in South Asia. While haematologic complications, such as cytopenia and bleeding, may occur in severe dengue infection, reports of haemolytic anaemia in dengue fever are scant. We report a patient who developed haemolytic anaemia following dengue fever. A 45 years old gentleman presented with five-day history of fever and was recently diagnosed with dengue fever. He developed jaundice and started vomiting on the third day of his clinical course. His laboratory investigations revealed deranged liver profile, Coombs negative haemolytic anaemia and G6PD deficiency. He was treated conservatively with fluids and blood transfusions. His liver functions and haemolytic anaemia gradually resolved. This case highlights the importance of recognising dengue fever-induced haemolytic anaemia in a G6PD deficient patient by physicians and pathologists, enabling better diagnosis and improved management of this life-threatening condition.

Dengue fever is a tropical mosquito-borne infection, which is caused by dengue virus and spread by Aedes aegypti or Aedes albopictus mosquitoes. Over the years, dengue patients have presented with both typical and atypical presentations in Pakistan. A large percentage present with mild symptoms such as fever. On the other hand, some patients experience more severe illness such  as dengue haemorrhagic fever and dengue shocksyndrome, which can be life threatening.1 Glucose-6- phosphate dehydrogenase (G6PD) deficiency, an X-linked disorder, is the most common enzymatic disorder of red blood cells in humans, affecting more than 400 million people worldwide. 2 The clinical expression of G6PD variants encompasses a spectrum of haemolytic syndromes. In this case report, we describe an atypical presentation of dengue fever manifesting as haemolytic anaemia in a G6PD deficient patient.

A 45 year old male was admitted with a five-day history of continuous high-grade fever with chills, vomiting and yellow discoloration of the skin. There were no significant past medical conditions and no history of any addiction, non-steroidal anti-inflammatory drug abuse or any alternative drug intake. The patient was diagnosed withdengue via a positive NS1 antigen and was being managed supportively with IV fluids. He had also received one dose of ciprofloxacin prior to his diagnosis of dengue. Over the next two days, the patient's haemoglobin started dropping and he developed jaundice. He was referred to Northwest General Hospital, Peshawar for further management. The patient was presented to us in September 2017 at our set up. The patient was febrile with a temperature of 100°F, deeply icteric and had subconjunctival haemorrhages bilaterally. Abdominal examination showed mild right upper quadrant tenderness. There was no evidence of lymphadenopathy, splenomegaly or hepatomegaly, or any mucosal site bleeding and rest of the systemic examination was normal. Automated cell counter showed white cell count of 20.78 with predominant neutrophils and normal platelets. Blood parameters showed haemoglobin level of 7.78g/dl with MCV of 98.12fl and MCH of 37.72pg and MCHC of 38.45g/dl. His peripheral smear showed severe anisopoikilocytosis, microspherocytosis, macroovalocytes, schistocytes and nucleated red blood cells. Retic count and LDH were both raised at 11% and 5949 respectively. His liver profile was also deranged (Table-1) (Figure & Table-2). 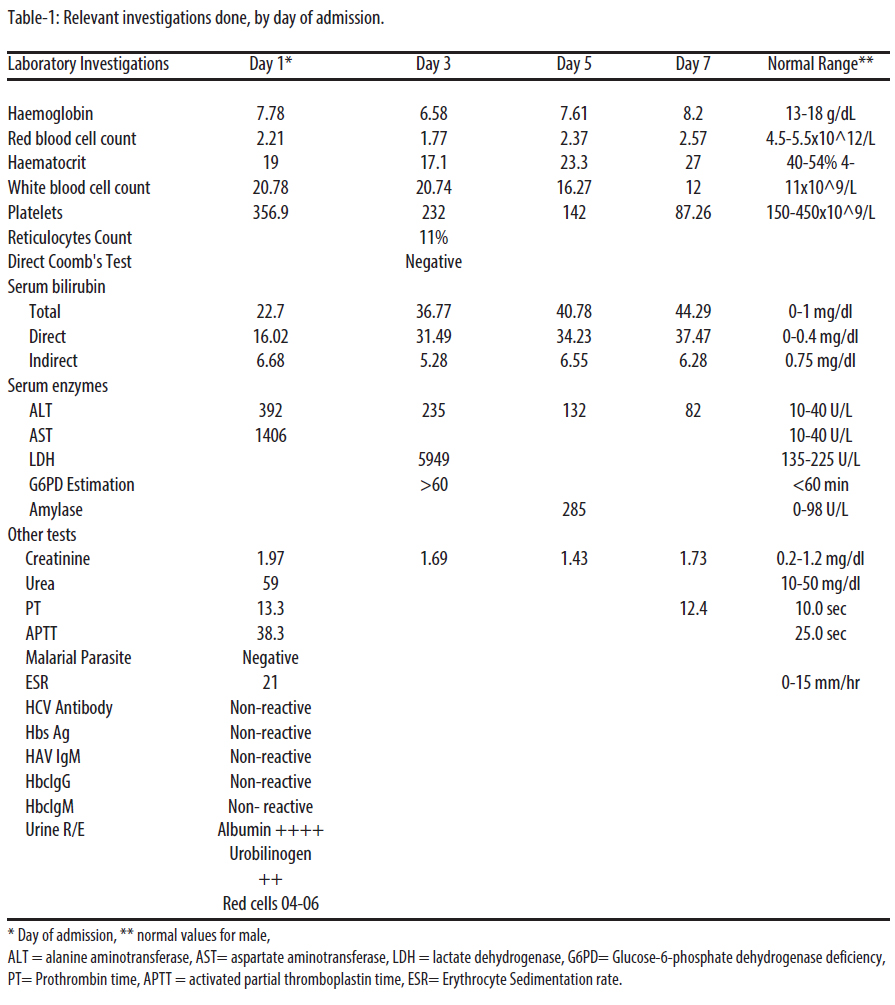 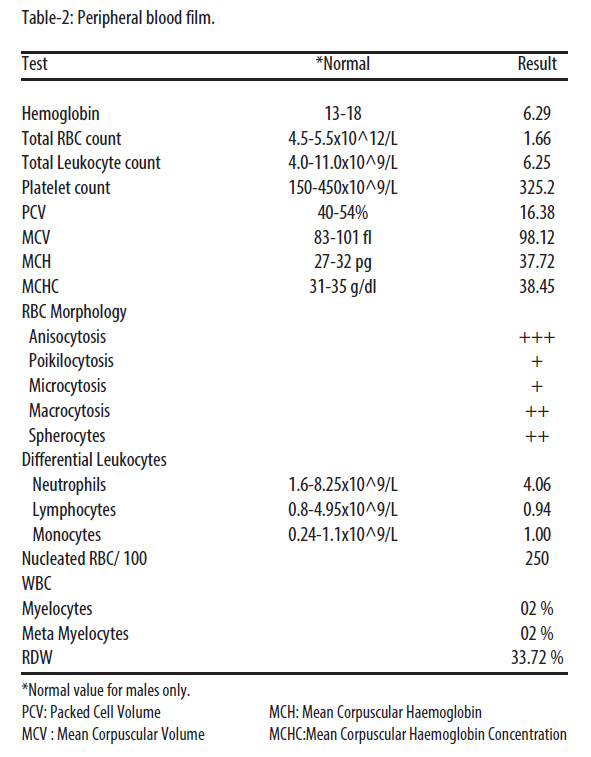 Abdominal ultrasound reported increased liver parenchymal echogenicity with evidence of diffuse infiltrative process. The patient was managed conservatively with rehydration, cold sponging and antibiotics. By day three, his fever had still not settled, he had developed abdominal pain and started vomiting and his haemoglobin had dropped further. In view of a predominant cholestatic picture, abdominal CT was performed. This showed mildly enlarged liver with normal intrahepatic biliary channels and minimal ascites. Haematology consult was obtained and after reviewing the history, examination and investigations, a haemolytic screen was advised. This showed G6PD deficiency and negative Coombs. The peripheral smear was reviewed and the findings were; macroovalocytes from liver toxicity, abundant microspherocytosis reflective of oxidative haemolysis from G6PD deficiency, few schistocytes and several nucleated RBC, reticulocytosis, left shifted granulopoiesis without further premature forms and platelet size adequate. A diagnosis of haemolytic anaemia secondary to dengue fever with underlying G6PD deficiency was made. His fever gradually resolved and his counts and liver functions tests started normalising. The patient was counseled regarding his G6PD status and he was discharged after seven days of hospital stay in a haemodynamically stable condition. Follow up in one month showed his investigations including blood picture and liver function test to be completely normalised.

Dengue fever can either be asymptomatic or symptomatic. Expanded dengue syndrome is characterised by unusual manifestations of patients with severe organ involvement such as liver.3 Haemolytic anaemia caused by infection and subsequent medication is a clinically important concern in patients with G6PD deficiency. It is found that monocytes from G6PDdeficient patients show an increased susceptibility to DENV infection with higher replication ability than those from normal controls. 4 Although there appears to be a connection between G6PD deficiency and enhanced DENV replication, 5 no studies have been carried out to elucidate the mechanism behind this observation. In addition, involvement of other organ systems has been reported in dengue fever. Hepatic dysfunction and neurological manifestations are common. In our patient there was hepatotoxicity. Both direct and indirect bilirubin were high suggesting haemolysis since admission. High LDH cannot be used as sole indicator of haemolysis since significant elevations of LDH and AST are usual findings in severe dengue cases due to ischaemic tissue injury. 6 Our case of severe dengue fever developed haemolysis, as manifested by sudden drop of haemoglobin, reticulocytosis, no blood loss and normal coagulation studies. Haemolytic anaemia alone in dengue fever is considered rare and has been described in case reports in Sri Lanka7 and in India as cold agglutinininduced haemolytic anaemia in a dengue patient.8 With the sudden anaemia, disseminated intravascular coagulopathy was considered, but ultimately thought unlikely as the peripheral blood film lacked microangiopathic features, and PT APTT were normal. Our patient was thought to have hepatitis because of ultrasound examination and higher ALT levels but his viral markers were negative. This patient had a self-limiting haemolytic anaemia following dengue fever. An extensive literature survey did not reveal previous reports of such an association. We have excluded, as far as possible, other likely causes of haemolysis. G6PD deficiency could induce oxidative haemolysis secondary to dengue fever. The mechanism of the haemolytic anaemia is not clear.

Our case implies that haemolytic anaemia might be a potential clinical feature of severe dengue. It alerts clinicians to consider haemolysis as a cause of anaemia other than blood loss due to gastrointestinal bleeding, in dengue. It also implies that dengue virus infection might be included in the list of the infective causes of haemolytic anaemia in addition to Mycoplasma pneumoniae and others. Other than that, in occult G6PD deficient patients the manifestation is even severe. In view of the rising incidence of dengue fever and a greater understanding of the disease, atypical manifestations of dengue fever are increasingly being diagnosed. An awareness of this observation is crucial for timely diagnosis and treatment, and therefore minimising the risk of permanent liver damage.

Disclaimer: None to declare.
Conflict of Interest: The authors declare no conflict of interest and permission was taken from the patient before starting on the report.