Dermatofibrosarcoma Protuberans (DFSP) has been described as the most common dermal sarcoma. It is a rare, slow growing, low-grade malignancy that is locally aggressive and has a high rate of recurrence and low metastatic potential. Most DFSPoccur on the torso, proximal extremities, head and neck regions. DFSP is characterised by local aggressiveness and if not completely removed, it recurs easily. We report a case which presented with a 1x0.5 cm mass arising from the left upperposterior part of humerus. We referred the patient to a reconstructive surgeon after we conducted a detailed history and physical examination. After excisional biopsy, the histopathological studies revealed the lesion to be DFSP. This rare lesion can be neglected or thought tobe nevus or lipoma,especially by primary care physicians who play a very important role in the prevention and early diagnosis of precancerous lesions.
Keywords: Family Medicine, Dermatofibrosarcoma Protuberans, Soft Tissue Sarcomas, Surgery. doi:10.5455/JPMA.302642267

Dermatofibrosarcoma protuberans (DFSP) is a rare, local, benign-aggressive tumour. It is most often diagnosed during clinical examination of a patient. It has a slow growth, local spread, low-grade malignancy potential as a tumour, high recurrence rate while a low metastatic potential.1 It often develops on the torso, the proximal extremities and the head-neck region. .2,3 Starting out as a small-sized, red-brown single nodule, it may locally progress to a multinodular hard, fixated mass with bleeding areas and ulcerations on it. .4  Surgical excision with wide margins is the main stay of treatment. .3  It can easily recur if not completely removed. .5  While it is aggressive as a local tumour, DFSP can rarely develop distant metastasis. Metastasis may usually occur after a long time period and approximately 85-90% of the cases are of low grade. The role of chemotherapy and radiotherapy is limited, with these being performed only during recurrence and distant metastasis. .4

In October 2017, a 42-year-old female patient consulted the family medicine polyclinic of Samsun Ayvacik Public Hospital, Turkey, for a nevus-shaped lesion in the posterior zone of the left shoulder girdle. The patient stated that the lesion has been present for ten years. She realised that for the past two months it has grown and changed its shape. Our patient stated that she had consulted several physicians who evaluated the lesion as a sebaceous gland. Examination of the lesion showed an exophytic, dark coloured, rigid, fixed mass the size of approximately 1x0.5 cm (Figure) 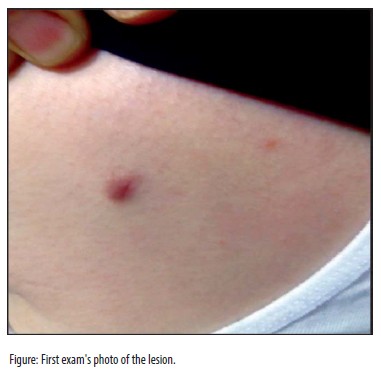 with an irregular surface in the posterior area of the left shoulder girdle. The patient was directed to the Department of Plastic and Reconstructive Surgery in Samsun Training and Research Hospital. The lesion was removed for excisional biopsy and was sent to pathology for further examination. The results from pathology identified it to be DFSP and with the lack of supporting metastasis in the PET/CT results, the patient was operated upon again. A surgical margin of 5 cm was determined and excision was performed over the muscle fascia with a local advancement blade. No adjuvant treatment was given because the surgical margins were negative. The patient had no complications during and after the operation, and returned to her daily life within a short time. In terms of recurrence and metastasis, her follow-up visits for screening continue at the Samsun Ondokuz Mayis University, Department of Family Medicine and Samsun Training and Research Hospital, Department of Plastic and Reconstructive Surgery.

Dermatologic patients constitute a significant portion of family medicine. Many lesions with malignant potential can be missed during physical examination. According to the decision taken by the Council of Specialty in Medicine, rotation of skin and venereal diseases was included within the rotations of family medicine specialty. .6  Dermatofibrosarcoma protuberans is a rare, locally aggressive, dermis-oriented soft tissue sarcoma. .4  It constitutes 0.1% of all malignancies, 1.8% of all soft tissue tumours and is diagnosed in patients between the ages of 20-50 years. It usually found on the torso (50-60%), upper extremity (25%), and more rarely, head and neck region (10-15%)..7  DFSP lesions usually begin as a plaque on asymptomatic skin colour and progress to nodule formation over a period of months and years. .2  Our case supported the clinical picture of DFSP with regard to age, location, quality and prognosis of the tumour. DFSP can be suspected in patients with a slowly-progressing, hard, nodular mass on the skin. The diagnosis is often made immunohistochemically after incisional biopsy. .2  In our case, malignancy was suspected and the patient was sent to the plastic surgery clinic. The lesion was removed by excisional biopsy and sent to pathology for further examination. The pathology results indicated the lesion as DFSP. A surgical margin of 5 cm was determined and excision was performed over the muscle fascia with the local advancement blade. Surgical margins play an important role in local recurrence and metastases and a safe surgical margin of 4-5 cm has been reported in various studies. Although locally aggressive in character, DFSP rarely metastasises. The rate of distant metastasis reported in the literature is 0-60%.4 The most common localisations of distant metastases are the lungs (1-5%) .2  Propagation is rarely by the way of blood, and in very few cases, by the lymph. Local recurrence is between 20-50%.4 Plain chest radiography and thorax CT can be used to evaluate lung metastases in long-term tumours or in local invasive cases. 2 In our case, PET/CT were performed to screen for metastasis, and none were found. Distant metastases usually occur several years after recurrence of the primary lesion. Taking place within three years at the most, local recurrence varies according to the grade of the tumour and situation of the surgical margin.4 Surgery is the mainstay treatment for DFSP cases. 3 Imatinib mesylate, a tyrosine kinase inhibitor used in the treatment of Chronic Myeloid Leukaemia, is also becoming a potential treatment option. As DFSP is radiosensitive, radiotherapy can also be used in large and recurrent cases. 2 In our case, adjuvant treatment was not given since surgical margins were negative, however controls were recommended every six months. Since DFSP is a localised skin tumour, systemic screening is recommended to check for symptoms as well as macroscopic examination of the incision site, rare occurrence of metastasis and many of the metastatic cases showing recurrence. 4 While there have been no recurrence or complications in our case which was monitored for three months and her followup examinations continue. In one of the most extensive studies on this topic, states mortality as a consequence of the illness is less than 2% over a five-year period and less than 3% over a 10-year period. 4

Our case was diagnosed with dermatofibrosarcoma protuberans in consideration of its clinical features and histopathological findings. With this case, we aim to communicate to the physicians of primary care, the general characteristics of DFSP. These rare lesions can be neglected clinically and are often mistaken as nevus or lipoma. The role of physicians working in primary health care institutions is of particular importance in the prevention and early diagnosis of precancerous lesions. Patients should be followed up with regards to the risk of benign lesions transforming to malignant onces and should be directed to advanced healthcare centers for diagnosis and treatment in the event of changes such as incrustation, bleeding, flaking, pain, increase in size, colour change and inflammation.

Informed Consent: Informed consent has been taken from the patient for the processing and publication of this case report.

6. Turkish Board of Medical Specialities, Record of Decision, Decision Number:82 [online] [cited 2018 May 5]; Available from: URL:http://www.tuk.saglik.gov.tr/TR,30660/uzmanlik-egitimirotasyonlari--karar-no-82-ve-bu-kararda-yapilmis-olandegisiklikler-.html

A typical presentation of dengue fever in a G6PD deficient patient: A case report