Objective: To look for trends in surgical management of acute cholecystitis and compare the outcomes of patients with severe condition.
Methods: The retrospective study was conducted at Aga Khan University Hospital, Karachi, from January to December 2016, and comprised data of adult patients who underwent cholecystectomy for acute cholecystitis from January 1, 2001, to December 31, 2014. Record of patients from 2001 to 2007 was designated in Group-1 while Group-II covered period between 2008 and 2014. Severe cases of acute cholecystitis were divided into similar period-based Group-A and Group-B. Data was analysed using SPSS 20.
Results: Of the 1153 patients, 521(45.2%) were males. The overall mean age was 49.3+14 years. There were 309(36.2%) patents in Group-I and 844(73.2%) in Group-II. Early laparoscopic-cholecystectomy was performed in 907(78%) patients. Postoperative morbidity was observed in 73(6.3%) patients. In Group-II, there was significant increase in early cholecystectomy, decrease in conversion rates and use of percutaneous cholecystostomy tube placement (p<0.05 each). In patients with severe acute cholecystitis, higher rate of early cholecystectomy was found in Group-A but it was not significant, and the same was the case in terms of conversion rate, postoperative morbidity and hospital stay (p>0.05 each).
Conclusion: Over the years, the institutional experience of managing acute cholecystitis has changed dramatically which has helped improve the level of care for the patients.
Keywords: Laparoscopic cholecystectomy, Acute cholecystitis, Tokyo guidelines. (JPMA 69: 1505; 2019).doi:10.5455/JPMA.1022

Gold standard for the management of patients with acute cholecystitis (AC) is early cholecystectomy, though for the high-risk patients an initial management with or without percutaneous cholecystostomy (PC) tube placement, followed by interval cholecystectomy (IC) is recommended.1 The timing of surgery is still subject to debate in patients with severe AC, since early laparoscopic cholecystectomy (LC) may be more challenging than interval LC in AC. 2  However, with increasing experience, risk of iatrogenic bile duct injuries has significantly reduced 3  and early LC for grade I and grade II AC is considered safe. 4  In literature, grade III or severe AC was reported in 6% to 40% patients admitted in hospital with AC diagnosis.5,6 High conversion rates (up to 75%) and morbidity rates (up to 40%) were reported when severe AC was approached via laparoscopy. This is why conservative management, followed by LC has been the routine practice for many years. 7,8 However, a number of recent studies have favoured early LC in severe AC as it has been shown to have no impact on iatrogenic bile duct injury and postoperative complication rates. 3,9-13 Due to these encouraging updates, the recent Tokyo guidelines 2018 suggest that early LC should be performed not only for grade I and II AC, but also in grade III AC under certain conditions. 1  The current study was planned to look and compare the trends in surgical management for AC in an urban hospital setting, and to compare the outcomes of patients with severe AC.

The retrospective study was conducted at Aga Khan University Hospital (AKUH), Karachi, from January to December 2016, and comprised data of adult patients who underwent cholecystectomy for AC from January 1, 2001, to December 31, 2014. Data of patients with histopathology reports showing a concurrent pathology or chronic cholecystitis were excluded. After taking exemption from the institutional ethics committee, a proforma was used to record information on patients' demographics, clinical features, co-morbid conditions, haematological and radiological findings, type of surgery, timing and duration of surgery, bile duct injury, length of hospital stay and 30-day postoperative morbidity. Sonographic findings related to thick wall gall bladder and pericholecystic fluid were used to diagnose patients with AC and histopathology report was used for confirmation of diagnosis. Patients were classified into grade I, II and III in line with the Tokyo guidelines on the basis of severity of disease.1 Record of patients from 2001 to 2007 was designated in Group-1 while Group-II covered period between 2008 and 2014. Severe AC cases were divided into similar periodbased Group-A and Group-B. Early cholecystectomy was defined as cholecystectomy within 72 hours of onset of symptoms. IC was defined as initial conservative management followed by cholecystectomy after an interval of 4-6 weeks. Data was analyzed using SPSS 20. Descriptive statistics were computed for characteristics of patients, laboratory findings, intraoperative features and postoperative morbidity. Categorical variables were compared with chi square or Fisher's exact test. 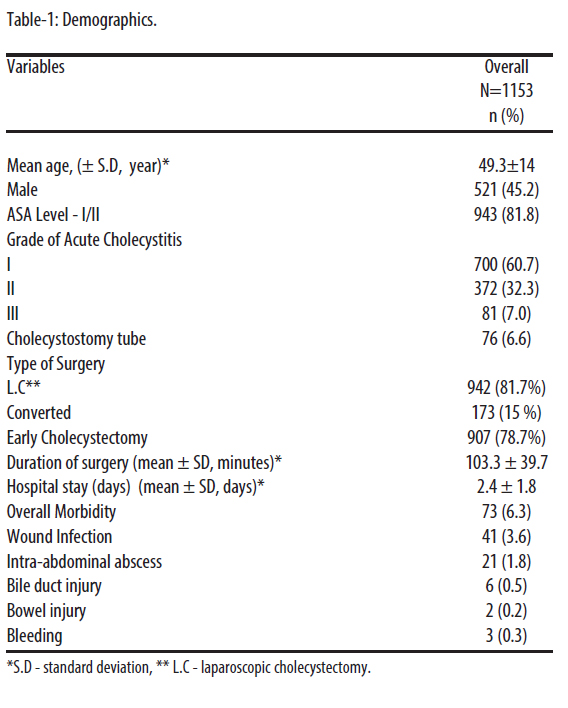 Patients in Group II were younger than Group I (p=0.038)but no significant difference was noticed related to gender, American Society of Anaesthesiologists (ASA) levels or AC grade (p>0.05 each). Early cholecystectomy  was performed significantly more frequently in Group II(p=0.00), with lesser conversion rates (p=0.000), and significantly reduced duration of surgery (p=0.00). A significant drop was noticed in the use of PC tube placement (p=0.00) over the years. However, there was no difference in overall morbidity and local postoperative complications between the groups (Table-2). 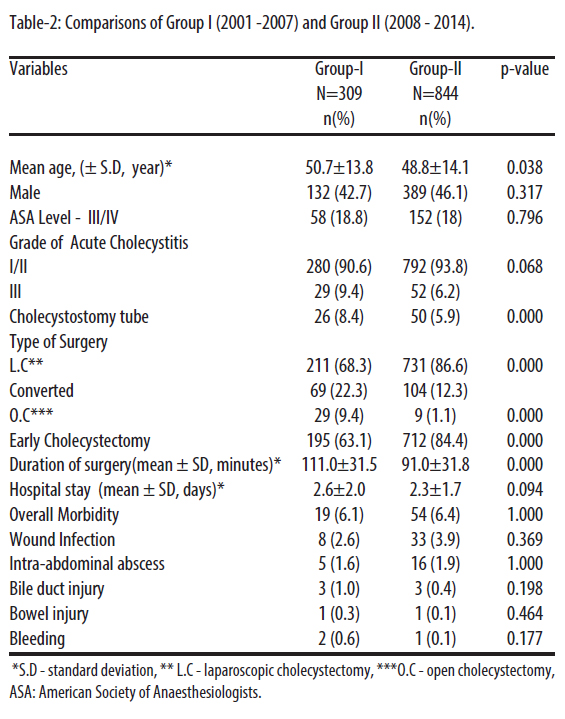 Group-A and Group-B were not significantly different in ASA levels, type of surgery, time of surgery, postoperative morbidity or hospital stay (p>0.05 each) (Table-3). 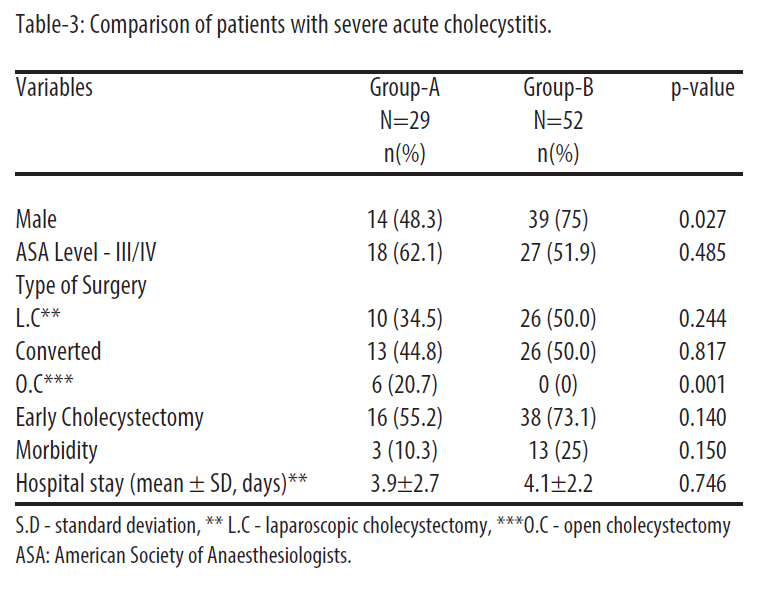 Dense adhesions 98(56.6%) were the most common reason for conversion followed by unclear anatomy of Callot's triangle 37 (21.4%), as mentioned in Table-4. 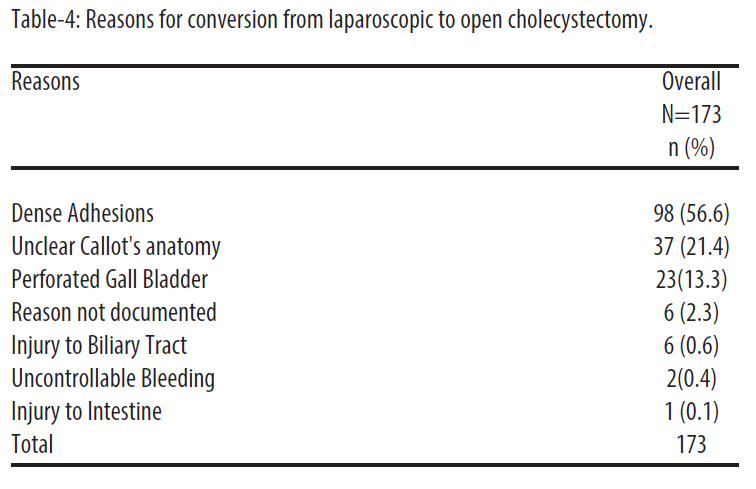 This is the largest known series of AC patients from Pakistan managed at a single tertiary care hospital over a period of 14 years. With the development of safer techniques and substantial increase in experience of surgeons in minimally invasive procedures, LC is now the gold standard for AC patients.14 LC was introduced as a treatment for AC at AKUH in 2000, and this study accounted for procedures performed by surgeons with similar experience in laparoscopic procedures. Overall, the study found that the rate of performing LC for AC has increase tremendously; from just 9% in 2001 to 23% in 2014. In the present study, 81.7% patients underwent LC. Recent evidence favours early LC in AC, as failure of initial conservative treatment has been reported to be as high as 32%. Also, early intervention has proved to be safe, with no effect on morbidity rates and reduced length of hospital stay. 15 In our experience, 75% patients underwent early cholecystectomy. In Group II, early cholecystectomy rate increased up to nearly 84.4%. Simultaneously, a significant drop in the use of cholecystostomy tube and IC was observed. This change demonstrates a significant improvement in laparoscopic skills for AC acquired over the years at AKUH. In literature, the conversion rate from LC to open cholecystectomy ranges from 6% to 35%. 16 Our overall conversion rate was 15%. As expected, with growing expertise, the conversion rate fell significantly. The most common reason for conversion in our experience was inflammatory adhesion in 98(56.6%) patients, which resonates well with other studies. 17,18 In severe AC, early LC as the treatment without any increased risk of injury has been suggested in recenttrials. 2,3 At AKUH, although the difference was not significant, early cholecystectomy for severe AC was performed more frequently in recent years. No significant difference was observed between conversion rates, postoperative morbidity and hospital stay between Group-A and Group-B. While it is early to reach a definitive conclusion, it is prudent to say that LC can be performed safely in severe AC in a comprehensive health facility. In literature, bile duct injury rate for LC is estimated to be 0.4% to 0.6%. 19,20 Bile duct injury rate of 7.7% has been reported with LC in a recent study from Pakistan. 18 In this series, bile duct injuries were reported in 6(0.5%) cases. Three patients had distal duct injury, which were primarily repaired and a T-tube was placed. One patient had proximal duct injury, for which roux-en-y hepaticojejunostomy was performed. The other two patients had right sectoral duct injuries which were successfully managed by intraoperative clipping and drain placement. Conversion to open technique may influence the frequency of local complications, including bile duct injury.19,20 A higher conversion rate without an increase in local complications for AC may therefore be explained by a lower threshold for conversion. This may explain why we had an overall low incidence of bile duct injuries (0.5%) and higher conversion rates (15%). Wound infection was the most common postoperative complication. Patients who underwent open cholecystectomy or conversion to open cholecystectomy had significantly higher wound infections compared to patients who were treated. Similar trend was seen in patients with intra-abdominal abscess. The change in perioperative management in Group-II resulted in alleviation in postoperative pain, and encouraged early ambulation and discharge from the hospital. More than 65% patients from Group-II were discharged within 48 hours of surgery compared to 58% patients in Group-I.

Contrary to the traditional approach of managing severe acute cholecystitis conservatively with percutaneous cholecystostomy and antibiotics followed by interval cholecystectomy, there is enough evidence to opt for early intervention with laparoscopic cholecystectomy which was found to be a better and safe option.

6. Brodsky A, Matter I, Sabo E, Cohen A, Abrahamson J, Eldar S. Laparoscopic cholecystectomy for acute cholecystitis: can the need for conversion and the probability of complications be predicted? A prospective study. Surg Endosc.2000; 14:755-60.

What are the appropriate indicators of surgical difficulty during laparoscopic cholecystectomy? Results from a Japan-Korea-Taiwan multinational survey. J Hepatobiliary Pancreat Sci. 2016; 23:533-47.