Paediatric brainstem gliomas (BSGs) can be classified broadly into two distinct categories: focal brainstem gliomas (FBSGs) and diffuse intrinsic pontine gliomas (DIPG). The former account for 20% of paediatric BSGs and are mostly indolent lesions with good prognosis. DIPGs constitute the remaining 80%, and are highly aggressive, malignant tumours having a dismal prognosis; being the foremost cause of death in children with brain tumours. Their poor response to treatment regimens is further complicated by their localization in eloquent brainstem areas, thereby making it difficult to establish a standardized framework of therapeutic intervention. In this review, the authors catalogue and appraise current treatment modalities utilized in the management of paediatric BSGs including steroid use, chemotherapy, radiotherapy, and surgery.
Keywords: Diffuse intrinsic pontine glioma (DIPG), Paediatric brains temgliom as, Radio therapy.

Paediatric brainstem gliomas (BSG) account for 10-20% of CNS neoplasms in children.1 While usuallycategorized on the basis of their imaging characteristics as either focal brainstem gliomas (FBSGs) or diffuse intrinsic pontine gliomas (DIPG), paediatric BSGs can also be stratified according to their amenability to surgical resection. In select cases, certain FBSGs such as those arising at the cervicomedullary junction, floor of the fourth ventricle, and tectum, as well as their exophytic components, may be surgically treated. 1,2 DIPGs owing to their poorly demarcated extension are generally considered inoperable, with the role of surgery usually limited to biopsy, either open or stereotactic, to establish histopathological diagnosis. 1,2 Other treatment modalities employed are radiotherapy and chemotherapy.This paper  aims to review the existing literature on currentinterventions employed in the treatment of DIPG and other BSGs.

In 2011, Cohen et al., explored the role of temozolomide (TMZ) in the treatment of newly diagnosed DIPG, in an attempt to determine a protocol that would yield a 1-year event-free survival (EFS) rate higher than 21.9% observed in a prior clinical trial by the same group. Sixty three children with DIPG were included, all of whom were treated with TMZ within 42 days of diagnosis to a dose of 59.4 Gy (daily dose of 90 mg/m2 /day for 42 days). TMZ was again given four weeks after radiotherapy, for 5 days every 28 days, at a dosage of 200 mg/ m2/day for a total of 10 cycles. The authors found no evidence of an increased 1 year EFS with the aforementioned regimen. Although the mean 1- year OS was greater than that of the prior trial, the median time to death was 9.6 months and thus did not serve to mitigate disease progression. 3 In 2016, Hennika et al. 4 advocated in their paper on DIPG, that focal radiation therapy to the tumour, and to 1-to 2- cm of the surrounding tissue should be the current standard of care, with doses of 180- to 200-cGy fractions administered 5 days a week for 6 weeks, for a total dose of 54 to 60 Gy. Objective tumour response and clinically significant improvement were 40-60% and up to 70% respectively, with a mean increase in survival by 3 months. Increase in dosage yielded greater toxicity with no tangible improvement in outcomes. No improvement was associated with hyper-fractionated radiotherapy, although the authors reported hypo-fractionated therapy over a course of 3-4 weeks to be effective in decreasing toxicity without compromising overall survival. Despite the different regimens however, clinical or radiological evidence of disease progression will manifest within three to eight months. With regards to chemotherapy, the authors state that there is no conventional chemotherapeutic intervention so far for post-radiation, progressing DIPG. In 2017, Upadhyaya et al. 5, presented an evaluation of 25 children with non-tectal BSG and discussed the benefits of a conservative approach when there are minimal signs and symptoms. Of the nine patients treated with radiotherapy, two patients manifested neuroendocrine deficits while another four patients developed varying  degrees of neurocognitive or psychiatric dysfunction, thereby influencing informed decision making when choosing appropriate therapy for FBSGs. 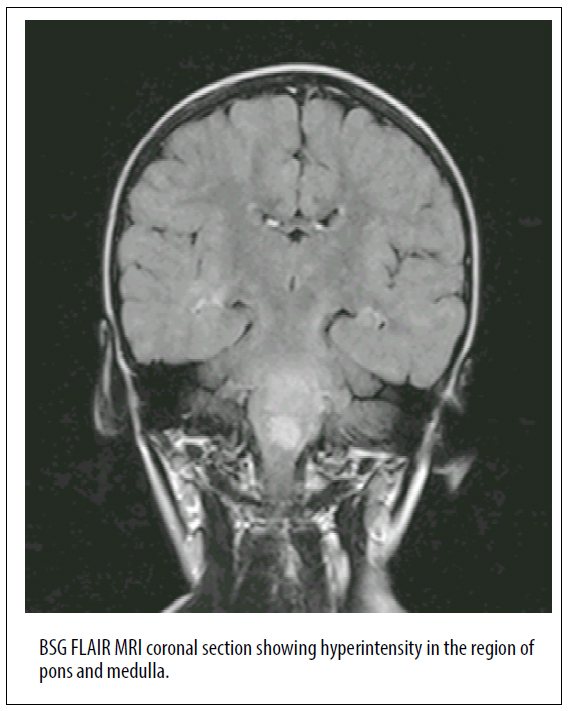 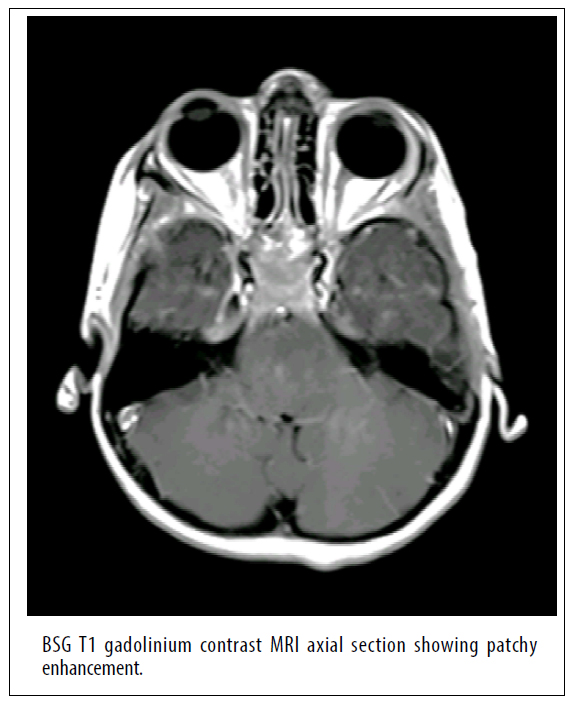 Five patients who received salvage chemotherapy were reported to be alive and progression-free at a median of 8 years' followup after initial progression. Although this is a small series, the results are quite encouraging and merit sharing. Puget et al. 6 in 2015 presented a prospective analysis of 130 children with radiologically typical DIPG who underwent stereotactic biopsy at their institution. The trans-cerebellar approach was utilized, with the authors reporting no mortality or permanent deficits, though a transient decrease in pre-existing neurological deficits was observed in five patients (3.9%), namely ataxia, and palsies of cranial nerves VI and VII. The authors however still recommend that biopsy should not be done to confirm diagnosis, due to the fact that the risk of procedure, despite being low, is not absent, stating that in the case of typical DIPGs, biopsies are only acceptable as part of an ethically validated study. In 2015 Sabbagh et al. 7 reported their results of surgical resections of highly selective BSGs, using cutting edge technology, including intraoperative MRI an d intraoperative neurophysiological monitoring that minimizes brainstem injury by continuous monitoring of afferent and efferent long tracts, as well as cranial nerve nuclei.Carai et al8 in 2017 explored the use of robotassisted stereotactic biopsy in DIPG patients, using the precoronarytransfrontal needle approach, which has a greater diagnostic yield, as well as decreased capacity for venous hypertension and damage to cranial nerve nuclei, due predominantly to the supine position associated with this method. Xue et al9 in 2018, published their experience with the use of intraoperative fluorescein imaging for the resection of focal and exophytic lesions. Twelve patients were surgically treated for BSGs, with all of them receiving 2.5 mg/kg of sodium fluorescein. Of these, nine cases were completely resected, with the other three having a mean resection of 93.7% owing to the ease of discrimination between the fluorescent lesion and nonflorescent parenchyma, resulting in a significant difference in Karnofsky performance score at 6 month follow-up. We must mention here that despite good results reported by aforementioned authors, brainstem lesions with typical features of DIPGs are no longer biopsied, and treatment is started on radiological diagnosis. Biopsy in such cases are reserved only for cases with doubts in the diagnosis, certain exophytic lesions or for research purposes, obviously with the due ethical procedures involved. In any case, such procedures should only be performed by highly experienced surgeons, in highly specialized centres, and that too based only on an MDT decision. In an interesting study published in 2016, van Zanten et al, 10 questioned the prevailing standard of steroid use in DIPG, with the global circulation of a questionnaire exploring physician prac tices, experiences and perceptions. One hundred and fifty physicians from all over the world responded and the investigators found, among other things, great variation in the dosage prescribed, from as low as 1.5 mg/m2 /day to as high as 52.5 mg/m2 /day. Numerous side effects were described by more than 85% of respondents with 77% stating that steroid alternatives are urgently needed.

Radiotherapy remains the current standard of care for DIPGs and a surgical biopsy is not considered a requirement prior to radiation. Thus so far, no chemotherapeutic regimen or agent has been shown to be useful in the treatment of paediatric BSGs, particularly DIPG. Despite advances in neurosurgical equipment and technique, attempts at biopsy or resection for certain FBSGs should be based on MDT decision and should be approached with great caution and planning. Symptomatic treatments include steroid administration, as well as surgical diversion of CSFin case of hydrocephalus.

Temozolomide in the treatment of children with newly diagnosed diffuse intrinsic pontine gliomas: a report from the Children's Oncology GroupNeuro Oncol. 2011; 1: 410-416.