Poor aesthetics due to gingival recession can be a common concern among patients, specifically in individuals with gummy or high smile line. Various factors including patient related, site specific and technical factors need to be considered while treating gingival recession, as they all have a significant bearing on treatment success. Patients having aesthetic problems due to exposed root surfaces should have surgical root coverage procedures. Pathologic migration of anterior teeth is another aesthetic and functional problem that may be associated with advanced or chronic periodontal disease. Literature suggests the destruction of periodontal supporting structures to be the most commonly associated factor responsible for pathologic tooth migration. This case report is about the management of dental aesthetics of a middle-aged lady who was concerned about recession and pathologic tooth migration secondary to chronic periodontal disease. Employing multidisciplinary approach that included surgery, periodontics, endodontic and prosthodontics, the lady was provided with an aesthetically pleasing dentition.

Dental aesthetics may have a social and psychological impact on the patient's quality of life and can have significant effect on their self-esteem and confidence.1 As clinicians, we are well aware of the basic principles of aesthetically pleasing dentition, but the specifications of the "perfect smile" may vary from patient to patient. Providing a beautiful smile with desirable aesthetics with acceptable functional efficiency and meeting patient's expectations is the most rewarding thing for a clinician. 2  In this modern era, with the improvement in materials and techniques, dental aesthetics can be improved by various options including orthodontics treatment, laminate veneers, and/or crowns and bridges. Porcela infused-to-metal (PFM) extra-coronal restorations are the most frequently used type of restoration in dentistry. Poor aesthetics due to gingival recession can be a common patient concern, specifically in individuals with gummy or high smile line. 3  Various factors including patient related, site specific and technical factors need to be considered while treating gingival recession, as they all have a significant bearing on treatment's success. Patients with aesthetic problems due to exposed root surfaces should be treated via surgical root coverage procedures. 4  In general, three approaches have been identified for the treatment of gingival recession: Pedicle soft tissue grafts (laterally positioned flap, double papilla flap coronally positioned flap, semilunar flap), Free soft tissue grafts (epithelialized and the subepithelial connective tissue graft), Additive treatments (enamel matrix derivative [EMD], guided tissue regeneration, and the use of acellular dermal matrices). 5  Pathologic migration of anterior teeth is another aesthetic and functional problem that may be associated with advanced or chronic periodontal disease. Multiple etiologic factors have been identified for pathologic tooth migration including periodontal attachment loss, occlusal factors, bruxism, tongue thrusting, playing wind instrument, and loss of teeth without replacement. 6  However, the literature suggests the destruction of periodontal supporting structures to be the most commonly associated factor responsible for pathologic tooth migration. 6  This case report is about the management of middle-aged lady who is concerned about aesthetics due to recession and pathologic tooth migration secondary to chronic periodontal disease employing multidisciplinary approach which include surgery, periodontics, endodontics and prosthodontics.

A 30-year old lady presented with the complaint of "Broken down carious, mal-aligned teeth since several months." On enquiring further, she was generally unhappy with appearance of her front teeth and smile because of her receding gums. Intermittent episodes of pain and sensitivity would occur in her left upper jaw which was relieved temporarily by taking analgesics. She also complained about bleeding gums associated with bad breath. She was under treatment for chronic liver disease and had previously been to a dentist for multiple extractions and fillings. Extra oral examination revealed absence of TMJ tenderness, crepitus or deviation. No lymph nodes were palpable. However lips were incompetent with acutely proclined left maxillary lateral incisor. Intraoral examination revealed a poor oral hygiene and uneven anterior occlusal plane. Or thopantomogram revealed generalized horizontal bone loss with mal-aligned posterior teeth. On the basis of clinical and radiographic examination (Figure 1 & 2), 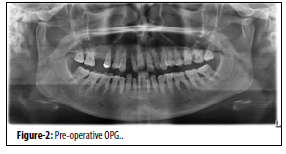 Diagnostic cast was made which was utilised for showing mock up to the patient of the expected outcome of different treatment options and then in making of laboratory based vacuum form stent before initiating treatment. In the control phase, deep full mouth scaling and polishing, reinforcement of oral hygiene instructions and extractions of all the periodontally compromised teeth with poor long term prognosis were performed non-surgically under local anaesthesia (lidocaine 2% with epinephrine 1:100000). Primary closure was achieved using 3/0 vicryl suture and patient was asked to follow up after 2 and 4 weeks. Bio-Mend collagen membrane with coronally positioned flap was utilised to treat gingival recession of #23. After the periodontal disease was stabilised and patient was maintaining meticulous oral hygiene, we proceeded for the definitive plan. All the pros and cons of both the definitive or prosthodontic treatment options were discussed in detail with the patient. As patient had time constraints and was more inclined toward fixed bridge, we decided to continue with it. However, patient did not want to replace #16 and 26 for now, therefore a PFM crown was planned for# 27. Root canal treatment of #13, 22, 23, 33 and 43 was then performed using ProTaper Universal (Dentsply) utilizing single visit approach followed by composite resin (3MESPE) build-up. On subsequent visit, tooth preparation for metallo-ceramic crown and bridge work was carried out in a way to eliminate or compensate for the excessive labial flaring of remaining maxillary anterior teeth. Provisional bridge was then fabricated using direct technique with integrity (Dentsply) and cemented by eugenol free zinc-oxide (Freegenol GC America). Patient was kept on interim prosthesis for four weeks to make her familiar with the anterior occlusal scheme and for the evaluation of aesthetics, so that adjustments if required could later be incorporated in final bridge work. Patient was satisfied and happy with the probable outcome. Therefore impressions were made with polyvinyl siloxane (Aquasil Dentsply) material using monophase technique. Metal casting framework trial was done to check for any discrepancies and then followed by final prosthesis, which was adjusted prior to placement. After verifying shade and adjusting occlusion, final prosthesis was cemented with glass-ionomer luting cement (GC Fuji) (Figure 3). 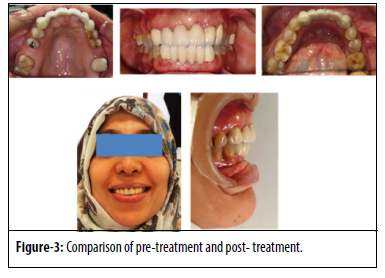 The patient was extremely satisfied with the outcome of the treatment as all her concerns were well addressed. The smile line was significantly improved because of the alignment of upper anterior teeth and correction of uneven anterior occlusal plane (Figure 4). 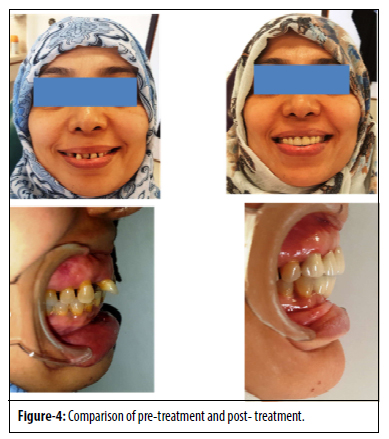 The whole treatment took around 2 months for completion.

It is important for a clinician to build an encouraging relationship with the patients suffering from social withdrawal due to aesthetic issues and to raise selfconfidence. This patient was suffering from social withdrawal and low confidence secondary to her prevailing oral health condition. Initially she was very depressed and had lost all hope, and therefore was least interested in the dental treatment. However, we gave her the confidence and counselled her about the improvements we could bring into her aesthetics by showing her a mock up. Due to progressively deteriorating oral health of the patient, the need for employing multidisciplinary approach in managing these cases is emphasised. This case high lights a successful interdisciplinary strategy (oral surgery, periodontics, restorative dentistry and prosthodontics) for aesthetic and functional rehabilitation of severely compromised teeth. Management of gingival recession should only be considered in patients who maintain healthy state of gingiva and a good level of oral hygiene. Root coverage procedures in Miller class I and II recessions results in favourable outcomes. Whereas Miller class III has a doubtful prognosis, allowing only partial coverage of the gingival recession. 7  According to current literature, sub-epithelial connective tissue graft is considered as gold standard for root coverage. 8  However, limited availability of palatal donor tissue and patient morbidity are major side-effects. Alternatively, collagen matrix can be used and maintained for long term root coverage with similar clinical results as obtained by utilising autogenous connective tissue grafts. 9  We have also used collagen membrane along with coronally advanced flap for root coverage of #23 with favourable outcome. Cardaropoli et al. 10  reported mean root coverage of 94.32% using a collagen matrix with coronally advanced flap compared to 96.97% with a coronally advanced flap and connective tissue graft. Ideally orthodontic correction of mal-aligned teeth in the treatment of pathological teeth migration could have been considered. However, she had time constraints and was not motivated and willing for such treatment. Therefore, we had to agree and plan accordingly to give best possible outcome. Conventional PFM crowns and bridges can play a vital role in improving aesthetics if planned, designed and maintained well and are more likely to provide long term clinical service and most importantly cost effective. 11  Nowadays, due to high aesthetic demands, there isincreased trend towards use of all ceramic materials or zirconia-based materials in relation to prosthodontics rehabilitation. However, the challenge still lies with the use of ceramic-based materials in restoring multiple missing units. 12 A systematic review comparing PFM bridge with zirconia FDPs reported significantly higher frequency of chipping in zirconia FDPs. 13  On the other hand, survival rates of PFM fixed partial dentures are about 97% over seven years or more. 14 Stabilisation of chronic periodontal disease and motivation of patients are important for the success of fixed prosthodontic treatment in cases of periodontally compromised teeth and pathological teeth migration. Regular follow ups and periodic non-surgical periodontal therapy are required to continually monitor and control the disease. The patient was very pleased with the overall outcome of the treatment.

Establishing aesthetics in dentistry and meeting patient's expectations is a challenge. Constant attention to details of macro and micro-aesthetics during treatment is necessary to achieve optimal outcome. Patients presenting with multiple problems including advanced periodontal disease, pathological tooth movement, gingival recession, over-erupted teeth, such as in this case, need a robust action requiring a multi-disciplinary approach.

Disclosure: None of the authors had any financial interest that would constitute the conflict of interest.
Conflict of Interest: Since the present manuscript is a case report that does not require an IRB certificate, but a letter of approval from the head of the department was obtained stating that ethical practices were followed in the management and reporting of the case. As one of the co-authors happens to be the head of the department also, which may constitute a potential conflict of interest.

Funding source: None to declare.