We report the presentation, management and outcomes of patients operated for hyperparathyroidism at our hospital. Patient sunder going surgery for hyper parathyroidism from 20 05 to 2 015 were retrospectively reviewed. Preoperative biochemistry, diagnostic scans and surgical procedures were studied. Follow up for cure rates, complications and histology were recorded. Out of 72 patients reviewed 54 (75%) were females and the rest males. The mean age was 48.04±15.5 years. Musculoskeletal complains were the most common (76.4%) among the cases reviewed. Asymptomatic hypercalcemia was seen in 13 (18.1%). The mean preoperative PTH level was 658.95 pg/ml and the mean preoperative calcium was 11.9 mg/dl. Bilateral neck exploration was done in 42 (58.3%) while focused unilateral approach was done in 27 (37.5%) cases. Solitary adenoma was the most frequent pathology in 58 (80.5%) patients. Asymptomatic hyperparathyroidism was less frequently detected in our population owing to lack of screening programme. Our patients are younger with a greater severity of the disease both symptomatically and biochemically compared to the West. In almost two decades, preoperative symptoms, calcium and PTH levels have changed marginally. Bilateral explorations are now giving way to focused less invasive procedures.

The clinical presentation of hyperparathyroidism has evolved over the last decade from classic renal, gastrointestinal and skeletal symptoms to asymptomatic biochemical abnormalities mainly hypercalcaemia detected during routine screening.1 Amongst the asymptomatic biochemical presentations, the trend has been shifting towards patients presenting with smaller adenomas and lower serum calcium and parathyroid hormone levels. 2-4 We see rapid increase in the prevalence of primary hyperparathyroidism where the current estimated prevalence of PHPT is as high as 1 in every 400 women and 1 in 1000 men. 5 This trend and epidemiology is mostly reported from the developed countries and data from developing countries is scarce where routine calcium screening is yet to be applied to the general population. Parathyroidectomy is the only definitive cure for primary hyperparathyroidism and results in immediate and sustained improvement in symptoms. 6 There is continuing controversy as to whether traditional gold standard bilateral cervical exploration is superior to minimally invasive removal of a preoperatively localised abnormal gland.7,8 Minimally invasive procedures have shorter operating times, smaller incisions and length of hospital stay.9,10 Confidence in this targeted approach grew with the introduction of intra-operative parathyroid hormone monitoring, with a specified quantitative drop in hormone levels as per Miami criterion.11,12 Our hospital, the Aga Khan University Hospital had previously reported a 12-year result of our initial experience with parathyroid surgery on 37 patients performed between January 86 to December 1997. 13 The highlight of this paper was high PTH levels and higher levels of urinary calcium in patients with bone disease wh en compared to th ose with stone d ise ase. The aim of this study was to investigate the presentation, surgical management and the treatment outcomes, of patients who underwent parathyroidectomy at our tertiary care institution in a developing country during the period 2005-2015. Previously published data from our center was also studied and any change in trend in patients' characteristics, presenting complaints and biochemistry were analysed.

The study was conducted in January 2017. After approval from the institutional ethics review committee, patients of all ages who underwent parathyroidectomy at our institution from January 2005 to December 2015 were included in the study. Clinical symptoms, preoperative parameters, details of surgical procedures and data at follow-up for at least 1 year postoperatively were retrospectively reviewed. Preoperative serum calcium concentrations were analysed from blood samples with Siemens ADVIA 1800, while plasma parathyroid hormone (PTH) was analysed by an assay for intact PTH using Siemens Immulite 2000. We looked at the localisation technique i.e. the use of ultrasound and radionuclide scanning. Surgical interventions whether bilateral neck explorations or focused unilateral explorations were reviewed. Drop in parathyroid hormone levels were checke d postoperatively. A drop of 50% from the baseline was considered as a successful exploration and those with a drop less than 50% were considered unsuccessful according to the Miami criterion. 12 Postoperative calcium levels that had been done at 3 months and 6 months were recorded. Histology of the excised specimens was recorded. Statistical analysis was done using SPSS v22.0 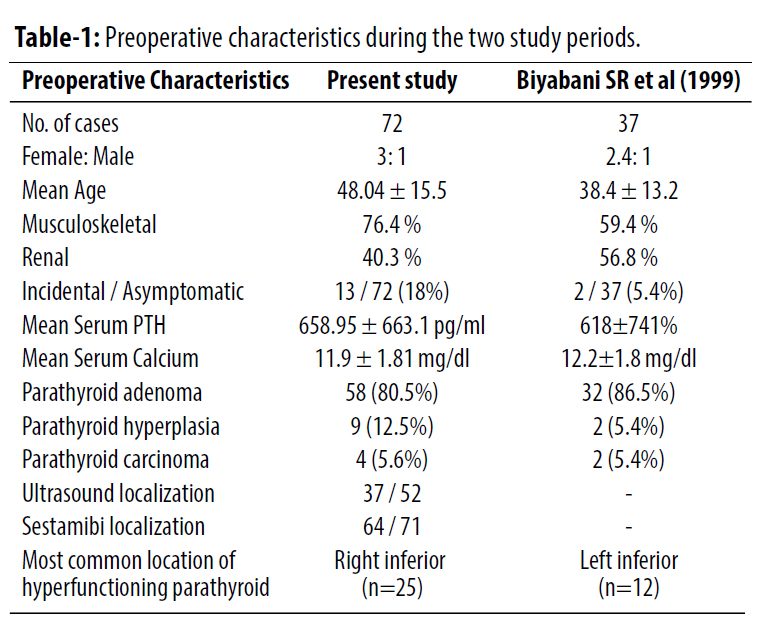 Mean age of our cohort was 48.04±15.5 years with the youngest being 1-year-old boy and the eldest was an 85-year-old male. Most patients presented with multiple symptoms. Musculoskeletal complaints like bone pain or fractures were the most common seen in 55 (76.4%) patients followed by gastrointestinal in 39 (54.2%) and renal in 29 (40.3%) patients. Incidental or asymptomatic hypercalcemia was seen in 13 patients (18.1%). The preoperative parathyroid hormone levels (normal 16-85 pg/ml) ranged from minimal of 104 pg/ml to 2500 pg/ml. The mean preoperative PTH level was 658.95±663.1 pg/ml. The preoperative serum calcium levels (normal levels 8.6-10.5 mg/dl) ranged from minimum of 8.10 mg/dl to 20.50 mg/dl with a mean of 11.9±1.81 mg/dl. Preoperative neck ultrasound had been done in 52 cases, detecting an enlarged parathyroid in 37 out of the 52 (71.1%) patients. Amongst the 37 detected, 31 were found to be adenomas, 4 were found to be parathyroid hyperplasia and 2 cases were found to be parathyroid carcinoma on final histopathology. The smallest lesion detected was of at least 1 cm in the maximum dimension. Color Doppler was rarely used during the detection of parathyroid lesions. Sestamibi scan was done in 71 out of the 72 cases which was able to detect hyper functioning tissue in 64 out of the 71 (90.1%) cases. Most common single lesion was found in the right inferior parathyroid location in 25 (34.7%) patients followed by left inferior location in 18 (25.0%) patients. Seven scans failed to detect any functioning parathyroid tissue. In 2 patients parathyroid tissue was found in the mediastinum and 3 other cases showed more than one hyper functioning lesions either ipsilateral or contralateral in the neck. Bilateral neck exploration was the most common surgical approach done in 42 (58.3%) patients while focused unilateral approach was done in 27 (37.5%) cases. One case was initially planned for unilateral approach but was converted to bilateral exploration. Two patients underwent a lobectomy and 1 patient required a sternotomy to remove it from the mediastinum. We compared unilateral versus bilateral explorations for their success and complications (Table 2). 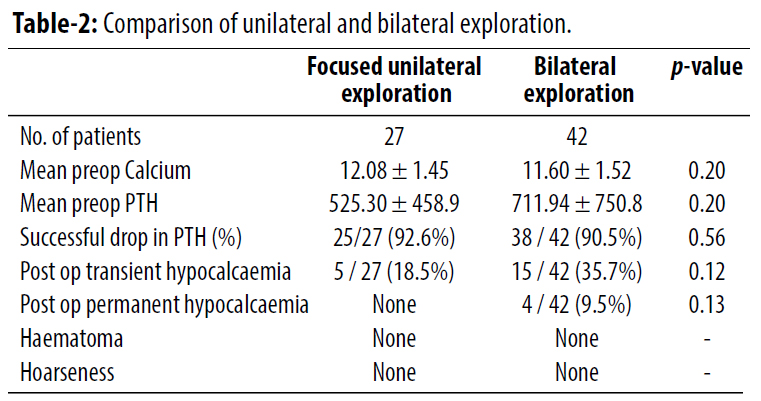 Hyperparathyroidism is evolving in the developed countries with obvious clinical symptoms giving way to subtle biochemical derangements and smaller lesions on preoperative imaging. 4 Our results indicated that this change in the patients' characteristics is not seen in our patient population where most of our patients had symptoms of musculoskeletal pain with or without gastrointestinal and renal complains. Data from studies have shown a female preponderance for the disease 3,14,15 with a ratio of 3:1 compared to males. This was also seen in our cohort where most of the patients were females (75%). However, when considering the mean age of patients at presentation, we had a younger population with mean age of 48.04 years as compared to 60 years and above in the other studies.3,14,16,17 Although musculoskeletal complaints were the most commonly encountered symptoms, in many studies the proportion of patients with incidental hypercalcaemia was much lower in our cohort (18.1%) compared to 45-60% in other series.3,15-17Another finding of our study was that the preoperative serum calcium levels were found to be higher with a mean of 11.90 mg/dl when compared to other studies reporting from 10.90 - 11.50 mg/dl. This was also true for our preoperative PTH levels which were remarkably higher with a mean of 658.95 pg/ml.3,4,14-18 We compared the preoperative calcium and PTH levels of patients having parathyroid carcinoma to those who did not. Parathyroid carcinoma patients had a higher PTH (953.25 ±120.25 pg/ml) and lower mean calcium (11.55±1.3 mg/dl). Patients with adenoma or hyperplasia had mean preop PTH of 647.83±98.9 pg/ml and calcium of 11.93±0.9 mg/dl. Ohe et al in their series reported mean serum calcium and PTH levels preoperatively to be significantly higher in the patients who were symptomatic compared to the asymptomatic ones.17 This was not seen in our cohort, the 13 patients with asymptomatic hypercalcemia had mean preoperative calcium of 11.8±1.29 mg/dl compared to 11.90±1.9 mg/dl (p = 0.90). In asymptomatic patients, preoperative PTH level was 533.92±508.4 pg/ml compared to 686±693.3 in those with symptoms. In other published data the preoperative PTH levels were reported slightly higher within the range of 100 - 200 pg/ml which contrasted with our PTH levels remarkably.3,14-16 The reason for such higher parathyroid hormone levels could be due to lack of routine screening of our population with serum calcium measurements which resulted in delayed presentation of more than 80% of our patients. Another reason for early symptoms could be the prevalence of severe vitamin D deficiency which was seen in all our hyperparathyroidism patients. Many studies have reported the increase in severity of symptomatic disease when the vitamin D levels are low.19-21 Most of these studies reported vitamin D levels below 25 ng/ml but the mean levels were around 20-21 ng/dl. Our values reported are of further severity and added onto the existing data with mean value of 16.27±12.04 ng/ml resulted in higher preoperative calcium and parathyroid hormone levels compared to other studies. On histology our frequencies of parathyroid adenoma being the most common diagnosis followed by hyperplasia were in line with many previous studies.3,14,15,17 However, we found a greater percentage of carcinomas (5.6%) in our patients which was usually reported as low as 1%.14,15,22  Both the unilateral and bilateral explorations had similarsuccess rates according to the Miami criterion. PTH values recorded from recovery room showed a drop of more than 50% in both the approaches. This is in line with previous reports by Westerdahl, Slepavicius and Aarum et al.9,23,24 Postoperative hypocalcaemia requiring continued calcium supplementation beyond 6 months was only needed in 4 patients, all of which had bilateral explorationsdone. This higher post operative hypocalcaemia was also seen by Slepavicus in their series. 23 Persistent disease was encountered in 10% of both the groups and it was interesting to note that five out of these 6 failed interventions had parathyroid adenoma removed confirmed on final histopathology. In one case the exploration turned out negative. This again highlights the possibility of multiple adenomas in patients with hyperparathyroidism. A significant limitation of our study was none of these patients returned for a second look procedure. Both the European Society of Endocrine Surgeons and the Fourth International Workshop on the Management of Asymptomatic Primary hyperparathyroidism in 2013 25,26 have favoured unilateral focused exploration for preoperatively localised adenomas and overall our study also supports the current consensus. In 1999, Biyabani et al from our institution reported the pattern of bone and renal stone disease in patients with hyperparathyroidism. 13 In their study 37 cases were performed over 12 years. We report double the number of cases during ten years. The mean age in their cohort was 37 years while our mean age 48 years. At that time mean preoperative calcium was 12.2 mg/dl, mean preoperative PTH was 618 pg/ml and only 5% of patients were detected as asymptomatic hypercalcaemia. Over the course of time we had 18% (13 patients) detected on screening but it still is far below the international data. Mean preoperative calcium and parathyroid hormone levels at presentation have minimally changed. Routine screening for hyperparathyroidism may detect further cases especially in young females as supported by our data.

We report differences in the pattern of disease between our series and the contemporary series reported from the west. Primary hyperparathyroidism is less frequently detected in our population owing to lack of screening programme and we have a younger population affected with hyperparathyroidism and greater severity of the disease both symptomatically and biochemically. This presentation in our region has not changed considerably over the years. For a preoperatively localised adenoma unilateral focused surgical approach is both effective and reasonable. This research did not receive any specific grant from funding agencies in the public, commercial or not-forprofit sectors.

13. Biyabani SR, Talati JJ. Bone and renal stone disease in patients operated for primary hyperparathyroidism in Pakistan: is the pattern of disease different from the west? J Pak Med Assoc 1999; 49: 194-8.

14. Thier M, Nordenström E, Bergenfelz A, Almquist M. Presentation and Outcomes After Surgery for Primary Hyperparathyroidism During an 18-Year Period. World J Surg 2016; 40: 356-64.