Objective: In this pilot study we aimed to evaluate the safety of a single intramuscular methylprednisolone (IM) injection at the time of discharge as a replacement for oral steroid therapy for patients in our population with asthma or chronic obstructive pulmonary disease (COPD).

Methods: This proof-of-concept, open label clinical trial without randomisation was conducted at the Pulmonary Department of Ziauddin Hospital and University, Karachi from January 2018 to March 2018. Patients discharged after in-hospital treatment for exacerbations of either asthma or COPD were recruited for this study. Intramuscular injection of methylprednisolone was administered to these patients who were then followed-up after one week and one month. During that period, information was collected of the patients' self-report of any unscheduled emergency room visit, blood sugar and blood pressure control, symptoms suggestive of thrush, increase gastric acidity and weight gain. For the data analysis, frequency and percentages were calculated with SPSS version 21.

Results: A total of 30 patients aged 52.83 ± 14.27 years were recruited for this pilot study. At one month follow-up, no unscheduled emergency room visits were observed in all of the study patients. Symptoms suggestive of oral thrush were recorded in only 2 (6.7%) patients and weight gain was reported by only 5 (16.7%). Controlled blood sugar and blood pressure was reported by all the patients. No incidence of nocturnal symptoms, awakening and dyspepsia were reported.

Conclusion: A single dose of methylprednisolone injection without any obvious side effects over one month among patients with asthma and COPD demonstrated a safe strategy for them.
Keywords: Intramuscular, Methylprednisolone, Asthma, COPD, Steroids. (JPMA 69: 991; 2019)

Chronic respiratory diseases contribute a significant share to the increasing global burden of n on communicable diseases. With common manifestations such as asthma, which is reversible, and chronic obstructive pulmonary disease (COPD) which is irreversible, mortality from the latter was found to be eight times more common than asthma.1,2 COPD ranked the third leading cause of global mortalities in 2010, and by 2030 it is projected to be the fourth leading cause of global deaths.3,4 According to World Health Organisation (WHO) fact sheet, COPD accounted for around 5% (3.17 million) of the total global fatalities5 in 2015. In 2012, the World Health Assembly embarked upon a 25 by 25 goal to reduce premature mortalities caused by non-communicable diseases including COPD by 25% by the year 2025. 6 Despite all the efforts made by the global community, a systematic review of COPD's global prevalence reported growing trends worldwide, as well as at regional levels. 7 Chronic obstructive pulmonary disease (COPD) is a noncurable but treatable and preventable disease, characterised by symptoms such as airflow limitation and persistent respiratory symptoms due to abnormalities in airway and/or alveolar. 8 In developed counties COPD is associated with smoking and occupational exposures, while the leading cause of COPD in low and middle income countries is the domestic use of biomass fuel for cooking and heating. 9-11Both progressive and chronic patients of COPD, often experience short episodes of aggravated respiratory symptoms. At least one episode of exacerbation per year is reported in 3.8% to 29.5% of these patients. 12,13Patients with exacerbation of Chronic Obstructive Lung Disease or asthma receive systemic steroids during hospitalization and also at the time of discharge. The benefit of steroid therapy is well established, 14,15however, the rate of relapse remains high, 10% to 12% in such patients. 16-18General guidelines exist for the dosage and duration of steroids. 19,20 In hospital, the dosages are generally at par with the recommendations, but the discharge dose depends upon the primary physician and it varies not only in the level of dosage but the duration of the dosage as well, which has led to a significant issue for the safety of patients. At the same time, based on our experience, it has been observed that patients who were using steroids on their own unsupervised, either under or overuse medication which leads to their frequent re-admissions in hospitals with exacerbations, and occasionally presenting life threatening status. Past studies advocate the administration of intramuscular injections as safe, and as effective as oral steroid therapy, suggesting it as an effective alternative for patients with asthma or COPD who are at high risk for non-adherence or unwilling to take oral therapy.16,21-25 We postulate a single dose of methylprednisolone in our population is a safe strategy at the time of discharge after acute exacerbation of asthma and COPD. Therefore, in this pilot study we aimed to evaluate the safety of a single intramuscular methylprednisolone (IM) in our population at the time of discharge as a replacement of oral steroid therapy for the patients with asthma or COPD.

Approval for this pilot study was obtained from the institution ethical review board ERC # 06/2018. It was a proof-of-concept, open label clinical trial without randomisation, with the primary end to evaluate the safety of admin istering a si ngle intramusc ular methylprednisolone (IM) at the time of discharge in patients with asthma or COPD in our population. Study was conducted at the Pulmonary Depar tment of Ziauddin Hospital and University, Karachi from January 2018 to March 2018. Patients between the ages of 18- 75 who were ready to be discharged after in-hospital treatment for exacerbations of either asthma or COPD were recruited for this study. Prior to inclusion, the risks, benefits and safety protocol were explained to all the patients and their guardians or legal care takers and an inform consent was taken for participation in this study. Permission of their primary physician was also obtained. Those patients with any contraindication to intramuscular injections, as per their primary physician, were excluded from this study. Pertinent information regarding patients' medical condition including diabetes control, body weight, blood pressure were collected as well as contact numbers of the patients, their guardians or legal care taker were also obtained. At the time of discharge, all enrolled patients were given an intramuscular injection of methylprednisolone. Injection site was documented and all the patients were followed-up through telephonic calls one week and one month after their discharge. Information on the resc ue -u se of shor t- ac ting bronchodilator inhalers as well as nebuliser and any visit to the emergency room or doctor's clinic other than booked appointment were obtained. Patients' selfreported information about their blood sugar, blood pressure control, symptoms suggestive of oral thrush, acid reflux symptoms such as increased gastric acidity, and information on weight gain were also recorded. The collected information was analysed using SPSS version 21. Frequency and percentages were calculated for categorical variables and mean±standard deviation (SD) was calculated for continuous variables. 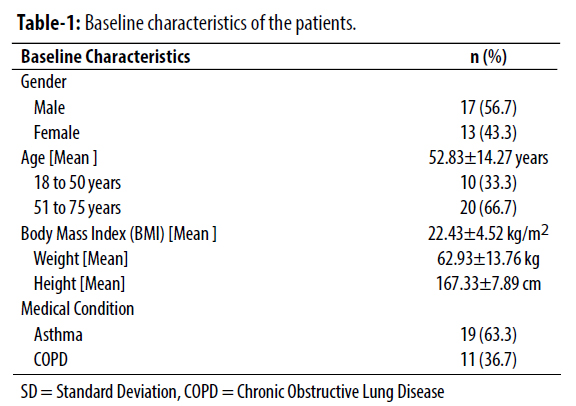 Outcome after one month of follow-up is presented in Table 2. 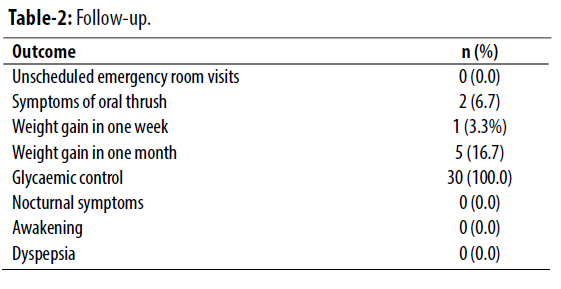 One month after discharge, no unscheduled emergency room visits was observed in all the study patients. Symptoms suggestive of oral thrush was  observed in only 2 (6.7%) patients and weight gain after one week and one month was reported by 1 (3.3%) and 5 (16.7%) of the patients respectively. Controlled blood sugar and blood pressure was reported by all the patients. Also during the follow-up period of one month no incidence of nocturnal symptoms, awakening and dyspepsia were reported. Rescue-use of short-acting bronchodilator inhalers as well as nebuliser is presented in Figure 1. 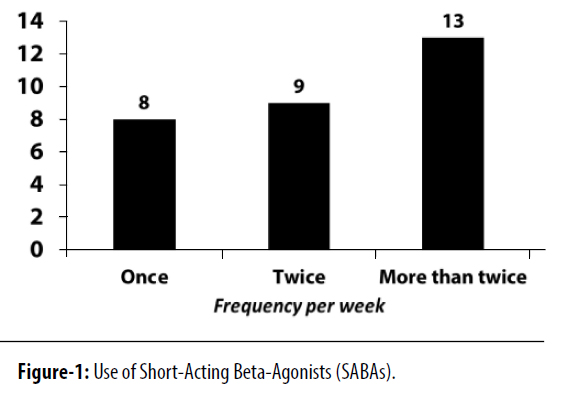 Aim of this pilot study was to evaluate the safety of administering a single intramuscular methylprednisolone (IM) in patients with asthma or COPD at the time of discharge. Steroids are one of the most important drugs, especially for the management of asthma exacerbations and to a large extent for COPD as well. Almost all patients are discharged on oral tapering dose of steroids.4,8,16 In the absence of strong guideline recommendations, 8 many physicians choose their own strategy which may vary from one patient to the other; also sometimes the different medical departments, mainly internal medicine and pulmonary administer their own discharge protocols. In our study, patients who received a single shot of intramuscular methylprednisolone (IM) at the time of hospital discharge reported no visits to the emergency room or doctor's clinic, no incidence of nocturnal awakenings and dyspepsia during the follow-up period of one month. Only 2 (6.7%) patients reported symptoms suggestive of oral thrush, and 5 (16.7%) reported weight gain, while all the patients reported controlled sugar and blood level. Findings from our study suggest that at the time of discharge, the administration of a single intramuscular methylprednisolone (IM) in patients with either asthma or COPD is safe. Our findings are the same as the studies conducted in other populations.16,21-25 Patients usually get discharged from hospitals prescribed with several different forms of drugs such as inhalers or nebulisation or oral medication for other comorbid conditions. Oral medication with confusing instructions on tapering is not only difficult for the well informed patients, but it is most difficult for patients who are either not educated or are guided by a family member. This may either lead to non-adherence of medication or under or overuse of drugs, which can result in repeated hospital visits for these patients.

Limitations and Recommendations for future
researches:

This pilot study was conducted on a small sample of patients and clinical efficacy of intramuscular methylprednisolone was not studied in our population. Further research among patients with asthma and COPD is needed to assess the clinical efficacy of a single intramuscular methylprednisolone (IM) injection as a replacement for oral steroid therapy.