May-Thurner syndrome (MTS) is a rare disease common in middle aged females, characterised by left-sided lower limb Deep vein thrombosis (DVT) due to compression of the left iliac vein by the overriding right iliac artery. Pregnanc y and puerperal phases are one of the hypercoagulable states further predisposing towards th rombu s format io n. Treatme nt in c lu de s both conservative and interventional (venous thrombectomy with or without stenting). Here we report a case of a 34- year-old female in her early postpartum period who visited the Agha Khan University Hospital in July 2016, with the onset of acute pain and swelling in the left leg. Her workup revealed left-sided Acute DVT, secondary to MTS. Her case was su cces sfull y mana ged with conservative treatment. This case is an important addition to medical literature in the sense that DVT occurring on the onset of postpartum period should not always be attributed to the hypercoagulability, secondary to pregnancy. With early diagnosis and aggressive management, MT Scan be easily managed .
Keywords: May-Thurner syndrome, Hypercoagulability, Un-fractionated heparin.

May-Thurner syndrome (MTS) is a rare disease which occurs due to the compression of the left iliac vein by the overriding right iliac artery, subsequently resulting in obstructed venous return, and ultimately predisposing the patient to deep venous thrombosis.1 Its incidence is variable and ranges between 5% to 18% in patients with DVT involving lower limb. It usually manifests in middle aged females, especially those in their partum period. Here we present a case of a young female with MTS reported at the Agha Khan University Hospital in July 2016. The patient was successfully managed with conservative treatment. Written and verbal consent, as well as a declaration was obtained from the subject.

Our patient was a 34-years-old female who had a Caesarean section 10 days prior to the event. It was during her eighth month of gestation when she delivered a dead foetus. Ten days after the operation she presented in the emergency room with complaint of a sudden severe pain in the left leg involving the entire lower extremity. Pain was associated with the development of a swelling from the foot to the thigh. The pain and swelling would increase while walking and relieved when resting with limb elevation. Patient reported limited mobility in her post-operative period due to incisional pain. She did not have any family history for DVT. Besides this, she did not have any comorbid or addictions. On examination her vitals were stable without any evidence of dyspnea or cough. Local examination revealed tenderness in the left thigh and swelling of the lower left extremity up to mid-thigh. There were no visible enlarged veins and perfusion of the leg was adequate. Ultrasound Doppler showed distended and noncompressible left common femoral vein, superficial femoral and popliteal veins with no color-flow on color Doppler examination. Thrombus was seen extending into left external iliac vein, however IVC appeared unremarkable as seen in Figures-1 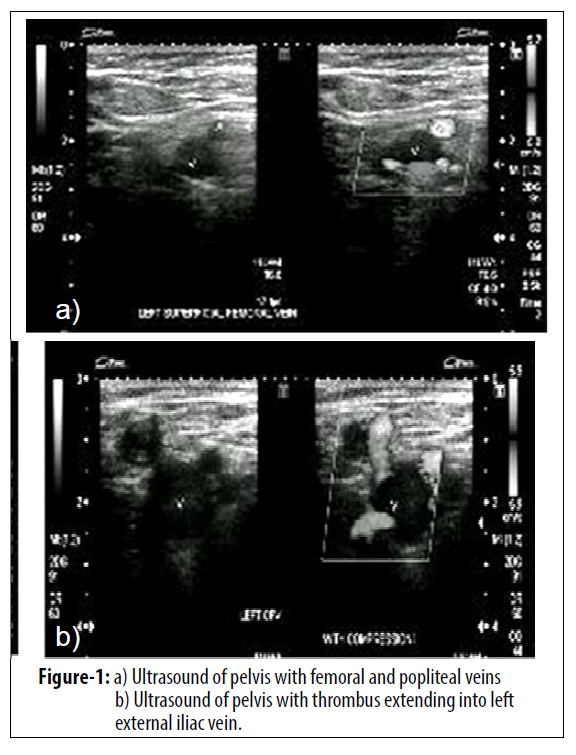 ACT scan was also performed which showed dilatation in the left external and common iliac veins, with evidence of a filling defect indicating presence of thrombus. The left common iliac vein was significantly attenuated in the segment behind the right iliac artery, and its communication with the IVC was not clearly visualised, suggesting MTS as seen in Figure-2. 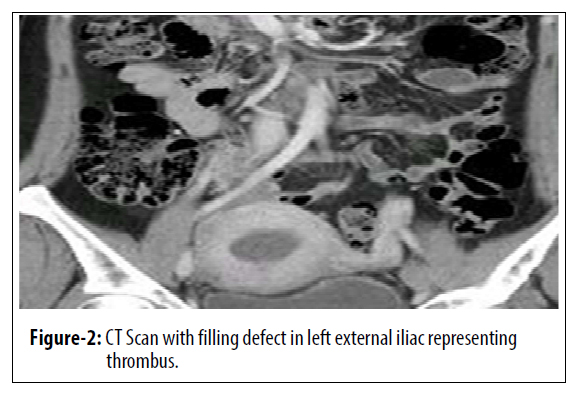 She was managed conservatively within the hospital and was started on intravenous heparin and titrated with target activated thromboplastin time (APTT) of 60-90 seconds. On achieving the target APTT range, warfarin was administered. Once the international normalised heparin infusion  was discontinued, and she was subsequently discharged home. On her follow up at the clinic, she remained symptom free and to date no evidence of post thrombotic syndrome has been found.

MTS or Iliocaval compression syndrome was first described in 1957 by May and Thurner. It results from extrinsic compression of left iliac vein by an anomalous overlying right iliac artery which predisposes to deep venous thrombosis. MTS is thought to represent between 2% to 5% of the lower-extremity venous thrombosis. It is three times more common in women than in men. It typically presents in the second to fourth decades of life. 3 Age of our patient corresponds with the age of other patients reported in literature. Pathophysiologically, a chronic stimulus is transmitted to the endothelial cells of left common iliac vein from the pulsating right common iliac vein. Bumps (Spurs) in the collagen are formed due to this stimulus leading to elastin accumulation, thus causing hyperplasia of endometrial blood vessels. This accompanied by Virchow's triad would lead to deep venous thrombosis. Hypercoaguable states, chronic trauma, obesity and immobilisation are common in such patients. 4 Our patient was a thin lean female with limited post-operative mobility having a recent history of C-section which supports the above mentioned findings. During pregnancy the risk of venous thromboembolism (VTE) increases 4 to 5 fold as compared to a non-pregnant state. 5,6In the postpartum period the risk of DVT is between 20 to 80 times higher than during pregnanc. 7 The risk is 100-fold higher in the first week of postpartum. 8 Hypercoagulability generated by pregnancy, along with obstruction of the left common iliac vein by an enlarged uterus is the cause for an increased risk of DVT during the third trimester and shortly after delivery. Swelling, pain or tenderness or enlarged veins or feeling of increased warmth in the leg or redness or discoloration of the skin, are the most common presenting complaints. Our patient had a history of a sudden severe pain in her left leg which was associated with swelling. Usually ultrasound is the first modality that is used for diagnosis. However, the gold standard for diagnosis is a contrast venogram which would show narrowing of iliac vein at the pelvic brim. Helical abdominal computed tomography (CT), magnetic resonance venography (MRV) and intravenous ultrasound (IVUS) are some the other diagnostic modalities. With recent advances in CT scanning techniques, results of CT venogram are now comparable to that of conventional venogram. CT venogram offers the advantage of being noninvasive, rapidly performable providing comparable results in contrast to digital subtraction venogram. A recent study by Kuo YS et al9 also suggests similar findings based on which we performed a CT venogram of our patient rather than the conventional venogram. Treatment modalities include use of anticoagulant, catheter directed thrombolysis, stent placement, placement of filters, surgical approaches including vein patch angioplasty with excision of intraluminal bands, division of the right common iliac artery and relocation behind the left common iliac vein or inferior vena cava and saphenous vein graft bypass to the inferior vena cava or ipsilateral common femoral vein. 2 Reestablishment of vessel patency by removing the thrombus, relieving the acute symptoms in order to prevent recurrent thrombosis and pulmonary embolism and to reserve venous valve function, thus preventing post-thrombotic syndrome is the main purpose of treatment for postpartum DVT. A recent Cochrane review indicated that thrombolysis caused considerably less post thrombotic syndrome. 10 Inability to identify or optimally treat DVT can result in both, short and long term complications. Proximal DVT is responsible for pulmonary embolism and 5% to 10% of the patients with DVT suffer from post thrombotic syndrome. 10 To date, there has been no consensus regarding the optimal treatment of MTS. Several questions remain unanswered such as, wheth er the solitar y use unfractionated heparin/anti coagulation is adequate or not, or if some endovascular intervention can be instituted; should it be only balloon venoplasty or stent placement  in the iliac vein? Nakajima et al in a case report suggested that the use of unfractionated heparin is adequate in patients with MTS and interventional options should be reserved for patients with persistent symptoms after the use of anticoagulation. 3 We managed our patient with only conservative treatment which showed immediate symptom relief and no evidence of post thrombotic syndrome to date. However, there are no guidelines for  management of future pregnancies in women with May- Thurner and iliofemoral DV T. 2 However, use of anticoagulation throughout pregnanc y has been advocated for prevention and management of thromboembolic complications during pregnancy and postpartum period.

This report highlights the importance of early diagnosis when there is a high index of suspicion for MTS as a cause for DV T. This repor t also suppor ts the use of anticoagulation as a solitary treatment modality for MTS.

Disclaimer: None
Conflict of Interest: None
Sources of Funding: None

Evans Syndrome and pregnancy: A case report with literature review

Conservative management of placenta increta in a primigravida: A case report