Outcome of interventional treatment modalities for retinoblastoma: Experience at a tertiary care centre in Pakistan

Retinoblastoma is the most common intra-ocular malignancy found in children in their infancy. Originating from the retinal cells, the disease has a significant association with mortality and morbidity. A case series study was conducted at the Lahore General Hospital eye department, from November 2016 to January 2018. Nineteen children having retinoblastoma in 19 eyes were included in the study. The retinoblastoma-affected eyes were classified according to the International Classification of Retinoblastoma (ICRB). Treatments assigned were based on the severity of the disease, monetary allowance and intervention availability. The treatment modalities employed were chemo-reduction, Ophthalmic artery chemosurgery (OAC), Intravitreal Melphalan, Cryotherapy and laser photocoagulation. To measure the outcome, the follow up period was between 6 to 12 months. The primary outcome measures among the majority of the patients were regres sion or obliteration of the tumour. Failure of treatments were also recorded which included progression of the malignancy requiring enucleation. This study concludes that the newer modalities such as OAC and Intravitreal Melphalan have shown promising results for tumour regression, leading to vision salvation, even at higher grades of ICRB.
Keywords: Retinoblastoma, Intravenous Chemotherapy, photocoagulation, cryotherapy, Intravitreal Melphalan, ophthalmic artery chemosurgery, regression, globe salvage, enucleation.

Retinoblastoma (RB) is the most common intra-ocular malignancy found among children in their infancy. Originating from retinal cells, and the disease has a significant association with mortality and morbidity. The incidence of retinoblastoma is considered constant worldwide, affecting one case in 16,000 to 18,000 live births, which corresponds to about 9,000 new cases annually.1 According to recent estimates, every year about 250 to 300 new cases of retinoblastoma are diagnosed in the United States of America and worldwide approximately 5,000 new cases are estimated. In developed countries, over 95% of the intraocular retinoblastoma cases survive, whereas in underdeveloped nations, infant mortality resulting from malignancy of this disease is as high as 50%. The reason for the high mortality and morbidity in underdeveloped countries is late presentations of patients for medical intervention, as the detection gets delayed to the extent that there is orbital invasion and the metastatic disease develops. 2  In Pakistan, a 24-year multi-centre retrospective studyconducted in Larkana, reported the prevalence of retinoblastoma to be 2.52%.3 A recent analysis on the incidence of ocular malignancies over a 20-year period that included about 1,454 cases, retinoblastoma was found to be the most common malignant tumour in 43.69% of the paediatric age group. 4 In 2003, "Shields CL et al introduced a new classification system for the disease called the International Classification of Intraocular Retinoblastoma (ICRB) 5This classification provided a correlation between the natural history of intraocular tumour and the likelihood of success with chemoreduction. It divided intraocular RB into five groups, A to E respectively with very low, low, moderate, high, and very high risk of treatment failure with chemoreduction. 5 Intravitreal Melphalan and Ophthalmic Artery Chemosurgery (OAC) are relatively newer modalities which are now well established as the mainstay retinoblastoma treatment therapies. These modalities led to ocular salvage in ICRB group D and above, and attractive options in those cases where vitreous seedlings were present or where there was a possibility recurrence. 6 This study was an analysis of treatments and the ocular survival of eyes in the five ICRB groups, for which a host of different interventional modalities were used in children presenting with retinoblastoma at a tertiary care centre.

After taking approval from the ethical review board, this case series study was conducted in Lahore between November 2016 to January 2018 at the eye department  of Lahore General Hospital. During the study period, 19 children were included between the ages of 5 months to 5 years, of either gender, presenting complaints of leukocoria/proptosis/decreased vision/buphthalmos and later diagnosed with retinoblastoma. Children with vitreous haemorrhage, secondary glaucoma and extra ocular extension of tumour were excluded from the study. Patients underwent serial examination under anaesthesia with indirect ophthalmoscope. All eyes were graded according to the ICRB system and underwent the standard systemic intravenous chemotherapy and photocoagulation. Chemo-reduction regimens included Carboplatin, Vincristine and Etoposide with median of 6 plus cycles that were administered according to standard therapeutic doses. Laser Photocoagulation was meted out with a 523 um argon laser for obliteration of the tumour's vascular supply, along with adjuvant cr yotherapy in selected cases. The protocol and technique for Ophthalmic Artery Chemosurgery (OAC) has been described in detail previously. 7 Intravitreal Melphalan was administered according to established guidelines. Complement B-scans were used to evaluate and document the change in the size of the tumour over the course of the treatment. Primary outcome measure was eye salvage whereas failure of treatment resulted in a progression of the malignancy requiring enucleation. A statistical analysis was conducted using SPSS software version 23. Analysis was stratified according to International Classification of Retinoblastoma (ICRB) and for treatment outcomes. The Kaplan-Meier estimator was used to gauge survival of patients over time, which included the probability of event occurrence i.e. regression over a 6 to12 month period after receiving the advanced treatments. A total of 19 patients were enrolled for the study over the course of nearly 14 months. The median age of patients at the time of diagnosis was 12 months, with inter-quartile range between 12 to 24 months. Out of the 19 patients, 12 (63.2%) were male and 7 (36.8%) were female. Of these 19 patients, 14 (73.3%) had bilateral retinoblastoma while 5 (26.3%) of the children were presented with a unilateral disease. The primary complain at the time of presentation was recorded as leukocoria in 13 eyes (68.4%), proptosis in 4 eyes (21.1%), decreased vision in 1 eye (5.3%) and buphthalmos in 1 eye (5.3%). For disease classification we used the International Classification of Retinoblastoma (ICRB)5 with a break down as follows: Group A (n=2, 10.5%), group B (n=3, 15.8%), group C (n=9, 47.4%), group D (n=2, 10.5%) and group E (n=3, 15.8%). Furthermore, vitreous seeding was observed in 14 eyes while sub-retinal seeding was observed in only 6. Further eye level characteristics are outlined in Table 1. 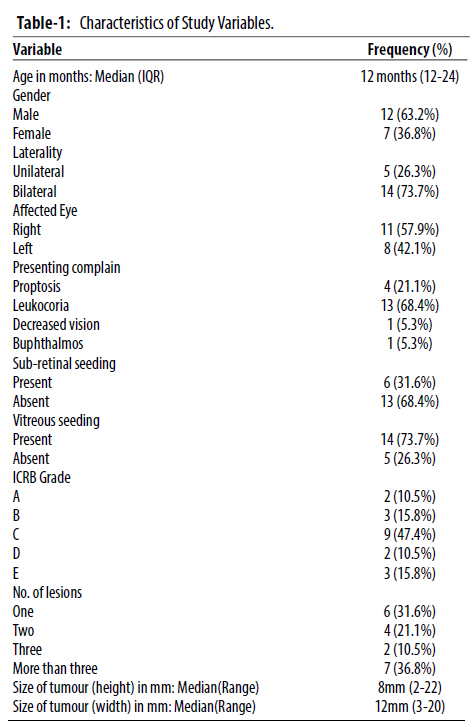 All eyes classified according to ICRB grades A to E underwent standard systemic intravenous chemotherapy with Carboplatin, Etoposide and Vincristine (median=6,  range:1-8 cycles). Photocoagulation was done among 15 eyes with median=2 sessions (range:1-7 sessions). In two eyes of grade A, disease regression was achieved in both patients. Only 3 (15.8%) eyes, one of grade B and two of grade C received cryotherapy. Ten (52.6%) eyes received intravitreal melphalan injections and 3 (15.8%) eyes received intra-arterial melphalan injections. Out of 3 grade B eyes, 2 eyes achieved regression and 1 eye is still under treatment. Out of 9 grade C eyes, 4 eyes achieved salvage, 1 patient was lost during follow up, 1 eye opted for voluntary enucleation after initial treatment failure and 3 are still under treatment. Two patients with grade D eyes ended up with treatment failure. Out of 3 grade E eyes enrolled in our study, 2 eyes were enucleated as the patients had unilateral disease at the time of presentation and the remaining 1 eye was also enucleated after the ocular salvage trial was unsuccessful (Table 2). 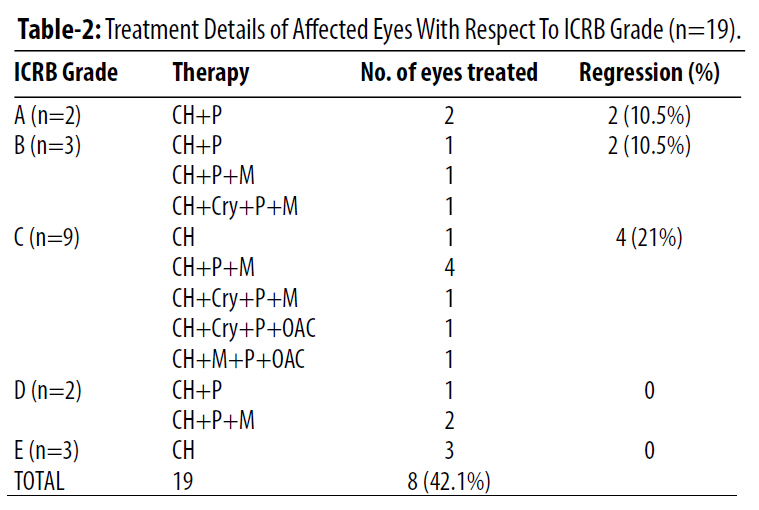 Among 19 eyes, 1 was lost during follow up and salvage was achieved in 8 eyes. The median salvage time estimated using Kaplan Meier is 5 months (95% CI: 3.66- 6.33 months). The probability of salvage after giving advance treatments such as Intra-Vitreal Melphalan or Ophthalmic Artery Chemosurgery (OAC) with Melphalan or with a combination is estimated to be 92% at two months, 55% at 4 months and 33% at 6 through 12 months as shown in Figure 1. 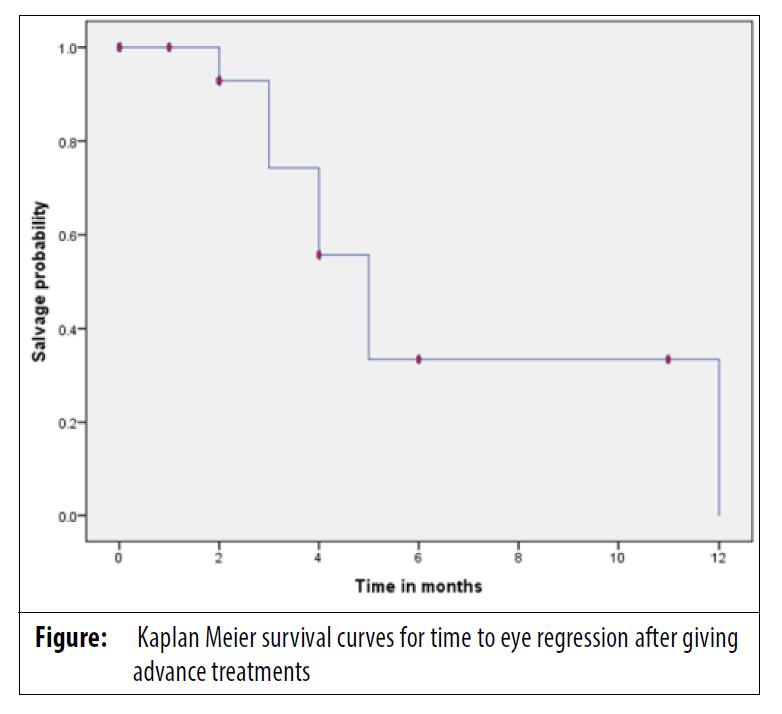 Retinoblastoma is a disease with a high mortality and morbidity among children. Current estimates gauge that retinoblastoma affects about 8,102 to 72,092 patients all over the world. This intraocular disease has high rates of mor ta lity, with projec ted fatality estimates at approximately 42% out of all the cases worldwide. 8 We have seen the treatment of retinoblastoma progress steadily over the past 100 years or so, and the management of the disease has become more advanced to increase the chances of salvage not only of a patient's life, but also of a functional vision. 9 Currently ocular salvage therapies for this malignancy involve systemic intravenous chemotherapy, external beam radiotherapy, cryotherapy, transpupillary thermotherapy and indirect laser photocoagulation. 10 The use of Ophthalmic artery chemosurgery (OAC) is rapidly gaining popularity as the mainstay disease intervention and has completely transformed the treatment and prognosis of retinoblastoma since its introduction. 11 In the span of the last decade, the treatment algorithms of retinoblastoma management, and even its classification has seen a complete overhaul due to the dramatic results produced by OAC and intravitreal chemotherapy. Now with OAC, 90% of the eyes that would be enucleated are getting salvaged. 12 Previously the Reese Ellsworth classification was used for retinoblastoma, but now the newer International  Classification of Retinoblastoma (ICRB) is being adopted as it can assist in the prediction of chemotherapy success. 5 For our analysis, we evaluated the overall globe salvage using a multitude of established treatment modalities at our disposal, including, newer modalities such as OAC and intravitreal chemotherapy, and the overall outcomes based on ICRB. We report, that globe salvage was achieved in 8 out of the 19 eyes and 1 patient was lost during follow-up. The treatment success is of approximately 44% of the total 19 eyes that were treated. The eyes that did not respond to the retinoblastoma management therapies and required enucleation, were usually presented to us with advanced grade E disease with extensive vitreal and subretinal seeding. Adjuvant treatment with systemic chemoreduction and laser photocoagulation did not bring about a reduction is the size of the tumour. Delayed diagnosis is one of the primary causes of a high prevalence of retinoblastoma in developing countries and is the most likely cause for a higher disease burden. 13 Using ICRB to stratify the eyes in groups, we found that globe salvage was 100% for group A eyes, and 66% for group B. Out of the 9 in group C, eye salvage was approximately 50%, while in group D and E no eyes were salvaged. This is in part because group D and E grades eyes are difficult to treat, because of vitreous and retinal seeding, large tumour size and were refractory to chemoreducation. 14 Other factors also come into play specifically to Pakistan as a developing nation. A single injection of Melphalan costs about $70, while the cost of OAC aggregates up to $800 for a single session. With no available health care or insurance policy, the burden of picking up the treatment cost falls on the family, who mostly come from the low-income group. Since chemoreduction and laser photocoagulation are subsidised modalities, most families opt for them. However, for advanced cancers, even for those that classify in group C, inferior interventions available compared to OAC, even external beam radiation. 13 The key factors for low survival and high morbidity in children with retinoblastoma from developing countries are pertaining more to socio-economic and cultural barriers, rather than the unavailability of state-of-the-art treatment, as observed with other paediatric malignancies. 15 Of the eyes which underwent OAC treatment alone, or were administered in combination with Intravitreal Melphalan, the probability of salvage rose to an estimated 92% at two months. Abramson et al also reported similar figures, heralding OAC as a safe alternative to enucleation, even in advanced grad es of retinoblastoma. 15Developing nations face a plethora of problems in their journey to fight retinoblastoma. The survival rate of children with retinoblastoma in low-income countries is found to be particularly poor. 17 Sitorius et al reported several problems that lead to hindrance in the treatment of retinoblastoma, and these include, but are not limited to, lack of effective screening programmes, trained ophthalmologists, lack of infrastructure, lack of health insurance and the high financial strain of treatment. 18 These are a few of the factors that need to be looked into if we want a more effective mandate to tackle Retinoblastoma and produce treatment results that are at par with developed nations.

New modalities such as OAC and Intravitreal Melphalan cause tumour regression leading to globe salvation, even at higher grades of ICRB.

Disclaimer: None
Conflict of Interest: None
Funding Sources: None

Variability of presentation and surgical approach in Congenital Cystic Lesions of Lung: A retrospective study in children presenting in Mayo Hospital