Educational environment for residents in Obstetrics and Gynaecology working in teaching hospitals of Lahore, Pakistan: A cross-sectional study

Regarding post-graduate training in Pakistan, the most commonly opted degree is the fellowship of College of Physicians and Surgeons of Pakistan (CPSP). At the same time, there are many other universities which are issuing their own degrees. But in terms of their assessment during the training, no proper system exists in Pakistan and generally it is considered as the responsibility of the hospital to maintain a good learning environment for the post-graduate residents (PGR's).1,2 For learning and training of residents, an appropriate educational environment is one of the important factors. As PGR's are future consultants, a good educational environment is necessary for their training and learning. 3 As in our country, differences in the environment of the hospitals definitely leads to the superiority and preference of a certain hospital over the other by the PGR's. This variation of the educational environment among different hospitals and departments depends upon many factors like the instructor or the supervisor, PGR's themselves, curriculum, social support by the institution and infrastructure available. 4  For the assessment of education environment, the most validated and commonly used tool is the Post-graduate Hospital Educational Environment Measure (PHEEM). Since its inception in 2005, PHEEM has enjoyed extensive popularity and has become a commonly used inventory. 5  It is a 40-items inventory in which and each item is answered on a 5-point Likert scale by the PGR's and assesses educational environment of their department in 3 subscales included Autonomy, Teaching and Social support. PHEEM has been validated in many studies and it has gained higher Crohnbach's alpha values in many studies which indicates its higher internal consistency. 6  It assesses the strengths and weaknesses of educational environment of the hospital and department. 7  As in our country, the educational environment has been assessed by researchers on a minimal level and most of the studies from our country are limited to a single institute, 8,9 so we planned this study with a particular reference to gynaecology and obstetrics (OBG) and we involved all the institutions of the 2nd largest city of the country, so that exact picture may be depicted and we may come to know the strengths and weaknesses of our educational environment. The objective of this study was to determine the educational environment of PGR's in the specialty of OBG working in the hospitals of Lahore, Pakistan.

This cross-sectional study was started at Department of OBG, King Edward Medical University. The duration of study was 2 months, from June, 2017 to July, 2017. Formal permission for this study was obtained from Institutional Review Board. All the PGR's of OBG working in all the departments of OBG in the city of Lahore, Pakistan from 11 institutes were included in this study. PGR's were contacted personally in their departments by the investigator. All the residents present in the department were requested to fill the proforma and if someone was absent or not present at that time, he/she was not contacted again. They were asked to fill an anonymous questionnaire and no written consent was obtained from participants. This was to maintain the anonymity and they were told that filling the questionnaire means that they are giving consent to be included into this study. The questionnaire consisted of two parts: Part one enquired about demographic details; and part two consisted of the PHEEM questionnaire. PHEEM has 40 items which are answered on a Liker t scale by participants (from 0 to 4). We obtained permission from author for using this scale in our study. As PHEEM has already been validated in a previous study conducted in Pakistan there was no need to validate it again. 10  PHEEM assesses educational environment in three subscales as teaching, autonomy and social support. The total score of all items may be maximum by 160 and it is divided into 4 global scales: 0-40 being poor; 41-80 being plenty of problems; 81-120 as more positive than negative but room for improvement; and 121-60 as excellent educational environment. 6 A sample size of 369 participants was calculated taking expected mean ±SD for PHEEM score as 93.96±20.79,10 level of significance as 5%, power of study as 90% as expected mean PHEEM score as 90.79. All the data for this study was analyzed using SPSS version 20. The mean score for total PHEEM score and its subscales was assessed for gender, year of residency, marital status and type of institute (public sector or private) using independent sample t-test taking p value >0.05 as significant. 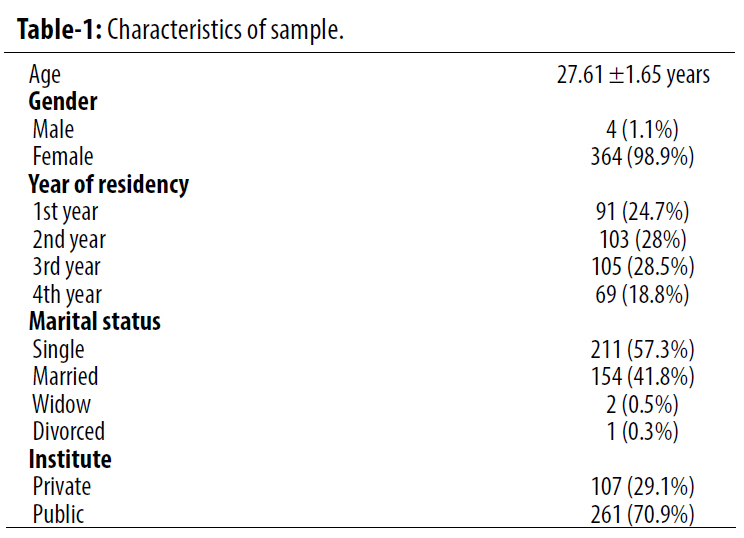 When PHEEM score was categorized, it was found that most of the participants labelled the environment as plenty of problems (Figure). 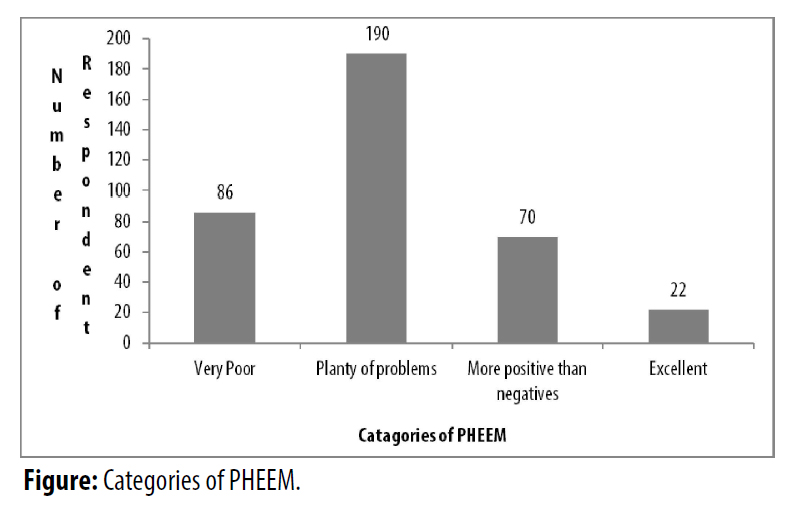 Also PHEEM score and its subscales were stratified for gender, year of residency and type of the institute. Total mean PHEEM score was found significantly higher for those working in public hospitals compared to private sector hospitals. All data is given in Table-3.

Conclusion: We conclude that educational environment for PGR's working in OBG departments is  not adequate and upto the mark and it needs special consideration to improve this environment.