Poisoning is a nationwide hazard. This was a cross-sectional observational study carried out from 2016 to 2017 focused on indoor patients of poisoning at the District Headquarters Hospital, Rawalpindi. We studied the gender-based differences in patients of poisoning to decipher information related to poisoning in which we noted eight variables. For the study 180 patients were included of which 54.4% were males and the rest females. Married patients outnumbered unmarried patients - 70.7% females and 50.2% males. The mean age was 30±12.9 and 27±12.6 respectively. Patients were predominantly of urban residence (56.1% & 52.4% respectively). Deliberate self-poisoning (DSP) was the most common intent among both genders, 81.7% in females and 72.4% among the males in contrast to accidental poisoning which was 23.5% in males and  18. 3 % in females. Aluminum-phosphide, organophosphates, snakebite and corrosive intake were the most common form of poisonings. Unknown causes of poisoning were found significantly more in males (P=0.001), while corrosive intake was more common among the females (P=0.002). Mean duration of hospitalisation for all was 4.22±3.5 days. Out of the 180 patients of poisoning, 18% expired as a result. Conclusively, among married women poisoning is more significant, homicidal poisoning is exclusive to males and corrosive poisoning is predominant in females.

Over the past several years, poisoning has proven and continues to be a major health problem worldwide.1 With morbidity and mortality rates rising sharply, it remains a daunting challenge for the medical community. In the developing world the outlook is especially grave with 84% of the fatalities occurring in low and middle-income countries. 2 This accounts for the loss of 10.7 million disease-associated life years lost. In Pakistan, according to a National Health Survey, poisoning is the second most common cause of unintentional injuries in persons aged 5 and above. 3 Various dynamics of the poisoning phenomena have been studied however gender-based evaluation of poisoned patients is scarce. Availability of such data will help in taking better preventive measures and improving patient management. DHQ Teaching-Hospital, Rawalpindi has remained a hub for the management of poisoned patients in the area. This study aims to determine the gender-based differences in patients presenting with poisoning and how they were managed at the stated hospital.

This cross-sectional observational study was conducted in the Department of Medicine, DHQ-Hospital Rawalpindi from 1st July to 30th September 2017 after acquiring approval from the Institutional Research Forum. All patients of poisoning aged above 16 and those who were managed in-house during June 2016 to June 2017 were included. Informed consent from patients or surrogate was acquired. Information on each patient managed for the poisoning, its complications and additional illnesses was compiled. Data regarding age, gender, marital status, residence, motive (intentional, accidental, homicidal), type of poisoning, duration of hospitalisation and outcome were noted on a specifically designed performa. Statistical Package for Social Sciences (SPSS) Version 23 was used for evaluation of the data, and frequency and percentages were calculated for categorical variables. Mean ± SD were calculated for continuous variables. Gender-based comparison was done via Chi2 test for categorical variables and T test for continuous variables. P value <0.05 was considered significant. Our primary objective was to study the gender-based disparity in cases of poisoning and our secondary objective was to study the pattern and types of poisonous agents used and associated mortality.  One hundred-and-eighty patients were included in this study of which 54.4% (n=98) were male and 45.5% (n=82) were female. Mean patient age of the group was 29.11±12.8 years and 109 (60.6%) patients were married. The highest number of patients were in the age group of 16-30 years 117 (65.2%). Urban residential address was noted in 98 (54.4%) patients. Intentional poisoning was most common factor in 76.6% patients. Thirteen types of poisoning were noted based on the kind of poison used. Of these poisonings the most frequent were from wheat-pill or Aluminum Phosphide (37.8%), organophosphates (16.1%), unknown poisoning (16.1%) and snakebite (12.8%). Mean duration of hospitalization was 3.51 ± 3.33 days. From the group 140 (74.1%) of the poisoned patients recovered, 34 (18%) expired and 15 (7.9 %) left against medical advice. The mean age of male and female patients was 30±12.9 27±12.6 years respectively. Among the women, the agegroup with the highest number of poisoned patients was 16-30 years 58 (70.7%) and among the men it was 16-25 years 45 (46%). Among poisoned patients 52% of the men and 70.7% of the women were married and 56.1% males and 52.4% females had urban residence. In both genders, intentional self-poisoning was the most factor while homicidal poisoning was exclusive to males. Nine types poisoning based on the kind of poison used were noted in males and 11 in females. Wheat-pill poisoning was most common form noted in both genders. Mean duration of hospitalisation was 3.51±3.9 days and 3.52±2.47 days in males and females respectively. In the study group 20% males and 14% females expired from poisoning. Of both genders 8% patients left against medical advice. 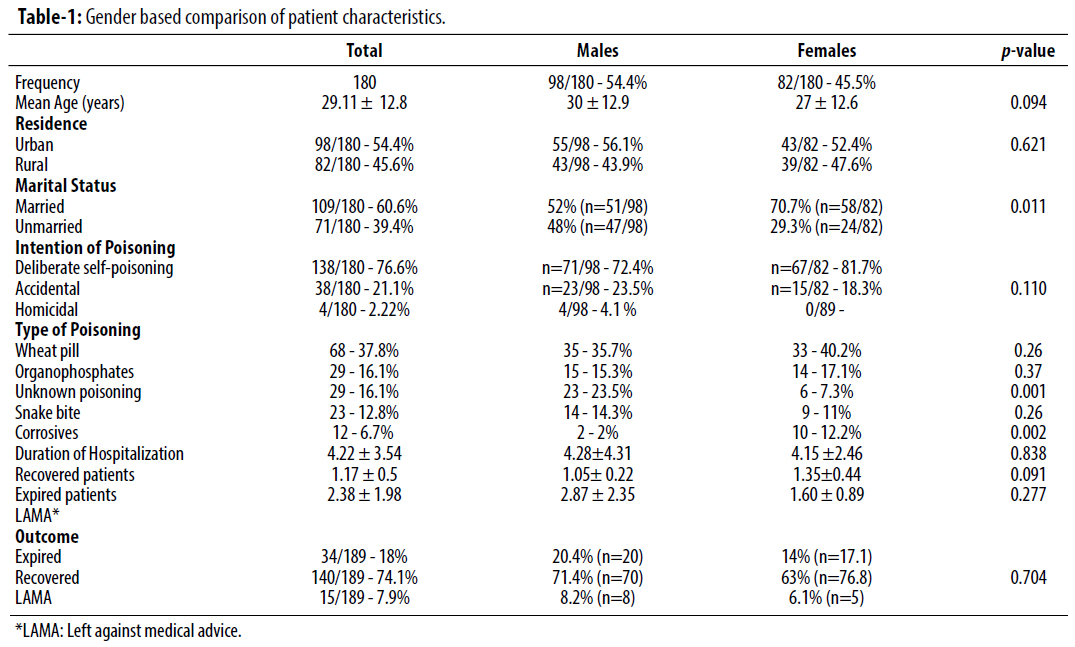 The relevant details are given in Table-1 while the gender and outcomebased comparison on the types of poisons is detailed in Table-2.

We focused on gender-based characteristics of the poisoned patients. Most interesting findings of this study were: 1) poisoning was more frequently noted in married persons and this was significantly more in married women, 2) homicidal poisoning was uniquely present in males 3) corrosive poisoning was significantly common in females and 4) unknown poisoning was significantly more in males. Rest of the characteristics did not bear significant difference. We noted 1.62:1 ratio of married to unmarried persons. Females outnumbered males in the married group by ratio of 1.2:1. This is an observation that has been previously documented which listed marital conflicts, economic problems and petty issues as some of the contributing factors.4 Medicolegal aspects are an important part of poisoning. It may be difficult to diagnose as clinical features of homicidal poisoning may mimic other clinical conditions. Substance used and motives of homicidal poisoning are variable. Geographical area, availability of poison, motive and educational status are also relevant important contributors. Homicidal intention in various studies is 1.8% to 5% in cases of poisoning. 5 In our study 1.4% of the poisoning cases were homicidal and this was exclusively noted in males. This finding corresponds with Pakistan's patriarchal social set up where in general males play an active role as compared to females who are frequently targets of enmity. Corrosive poisoning is an important cause of morbidity and mortality in developing countries. Up to 20% of patients of corrosive poisoning may expire. 6 In developed countries it is more common in children because of accidental intake.6 Whereas in developing countries young-age group uses corrosives for DSP. We noted corrosive poisoning used significantly more among the females. This can again be explained because of our patriarchal set-up and socio-economic dynamics. Restricted mobility and consequently less access to other types of poison make females at home prone to use corrosive poisons. It implies the need for urgent regulatory and guideline policies for corrosives since they are found in numerous household products. Unknown poisoning is a diagnostic challenge. Suspicion is based on clinical scenario, information gathered from persons accompanying the patient and behaviour of family members. We included in this group: 1) who were brought in unconscious by the police and sustained financial loss 2) clinical scenario suggesting a definite type of poisoning was missing, and 3) patients were being managed for suspected poisoning based on clinical acumen when other diagnosis could not be made. Frequency of unknown poisoning in related studies have been similar to our findings. 6 A somewhat more involvement of males was found in poisoning as compared to females (1.05:1). Similar results have been noted in India. 7 Strains of daily-life, financial, domestic, psychiatric-issues, easy availability of poison contribute to the more active involvement of men. 4 In a study that relied on data from Pakistan National Emergency Department Surveillance, maximum number of patients belonged to age group of 25 to 44 years. 7 Involvement of younger patients has been documented in studies in Pakistan. 8 Internationally patients with acute poisoning are generally in the age group similar to the one noted by us. Our results need to be interpreted in view that paediatric patients are not managed at our hospital. Urban-rural area residence ratio in our patients was 1.20:1. No significant gender related difference was noted. Higher mortality was noted in patients with rural residence which could be due to, delay in reaching a hospital, lack of proper first-aid facilities and inappropriate management in aprimary set-up. Deliberate Self Poisoning (DSP) is an important health care issue in developing countries like Pakistan. Out of every 100,000 Pakistanis, about 8 persons commit DSP per year.9 DSP was the most common intention in both genders. Our results mirror other studies where young females were more frequently involved in it.9 A predominantly young age-group is involved in accidental poisoning and percentage-wise a higher involvement of males was noted. In Western world mortality of hospitalised poisoned patients is 0.6%.10 In developing countries 2.5% to 30% mortality has been noted.8 Our expiry rate was 18% which is comparatively high. In our study more males perished compared to females. Pesticides are documented to be the leading cause of poisoning in the developing world which is also reflected in our findings.11,12 Patients who expired as a result of poisoning had a shorter duration of hospitalisation. Poisoning from the infamous wheat-pill is fatal and the cause of majority of deaths. Gender-based difference with reference to duration of hospitalisation of recovered orexpired patients bore no significance. Can these results be generalised? The answer is yes provided the following are kept in mind: 1) the study was conducted at a public-sector hospital located at center of the inner city which caters to mostly underprivileged people, therefore the study population may not be representative of the whole city. 2) we included indoor patients whereas only a proportion was managed in the emergency department. 3) Paediatric patients were not included as mentioned and 4) for those patients who were affected by unknown poisoning, a definite poisoning type diagnosis could not be made as toxicological screening was not done. Overall, young, male, married status, deliberate self-poisoning and pesticide-use were the main characteristics of poisoned patients in this study. Gender-wise, significantly more females were married, homicidal poisoning was unique to males, corrosive poisoning was significant among females and unknown poisoning was significantly more frequent among males.

Disclaimer: None
Conflict of Interest: None
Sources of Funding: None

Educational environment for residents in Obstetrics and Gynaecology working in teaching hospitals of Lahore, Pakistan: A cross-sectional study