The prevalence of hypertension and obesity and effective factors: A cross-sectional bazaar study

Objective: To determine the prevalence of hypertension/obesity and the effecting factors. Method: This cross-sectional study was done on segments of population that were shopping in 4 bazaars of Bornova, a district of Izmir province in western part of Turkey. In this research sample selection was not used. Between 12 April and 1 June, 2016 individuals who voluntarily had their blood pressure checked were included in the scope of the research (n=1023). Blood pressure was classified according to JNC-8 and during evaluation, borderline values of SBP <140 and SBP >140 were obtained. Also during evaluation borderline values of body mass index (BMI kg/m2) were determined as BMI <30 and BMI 30. SPSS 21 was used for statistical data analysis and p<0.05 was found to be statistically significant. Results: The proportion of those with SBP 140 was 244 (23.9%) and the proportion of those with BMI 30 was 312 (30.5%). The average SBP of individuals with hypertension was 0.22 times (%95 CI: 1.16-0.31) higher than the individuals without hypertension diagnosis, and the obesity rate was 0.49 times (%95 CI: 0.36-0.66) higher.
Conclusion: HT and obesity rates were found high in the people investigated and obesity was determined as an important risk factor for HT. In order to prevent HT and obesity, diagnosis at an early stage is necessary to bring HT under control. Awareness about HT and the health risks it causes should be raised among people and they should be encouraged to make the necessary lifestyle behavior changes.
Keywords: Hypertension, Obesity, Prevalence, Awareness on HT. (JPMA 69: 1018; 2019)

In all communities, hypertension (HT ) and obesity are increasingly seen as health problems that are progressively turning into global epidemics. The relationship between hypertension and obesity has been known since 1900s. The studies carried out demonstrate obesity causes, along an increase in heart rate, vasoconstriction and increase blood volume in the development of HT.1 The relationship between body weight and blood pressure varies with age, gender and race. An increase in weight elevates the risk for HT. 2  According to World Health Organisation's (WHO) data, overweight and obesity are responsible for type 2 diabetes mellitus (DM), development of ischaemic heart diseases and HT in European adults3 Therefore prevention of obesity rather than its therapy holds a very important place in preventing the diseases it causes. Although the possibilities of early diagnosis and therapy in HT have increased in our country, the awareness, routine tension measurements and compliance with therapy are not at the desired level. 4  Nurses occupy an important role in curbing the global health problems of hypertension and obesity by identifying them in individuals at risk and in decreasing possible complications. In international and national studies, it was determined that nurses play a significant role in reducing blood pressure in patients who are at risk of developing chronic diseases; in making alimentary changes; in recommending physical activities; following up on adherence to medications and in making diet alterations. 5  This study was conducted to identify the prevalence of hypertension and obesity and its effective resolutions.

The scope of this cross-sectional research comprises    individuals who were visiting 4 bazaars of Bornova country/Izmir for shopping. In this research, sample selection was not used. Between 12 April and 1 June 2016, individuals who volunteered to have their blood pressure checked were included in the scope of research (n=1023). Research data was collected using a survey form developed after reviewing literature. 4,6  The survey form consisted of 12 questions with 3 open-ended and 9 closed-ended questions. Researchers checked the participants' BP on right or left arms after they had rested for at least 10 minutes. Blood pressure was classified according to JNC-8. Borderline values of SBP <140 and SBP >140 were obtained during evaluation of blood pressure (SBP). A scale was used to record a weight in kilogram (kg) and a rigid tape measure was used to measure the height in centimeters (cm). On a weighing scale sensitive up to 0.5 kg, body weights were taken with light clothes on but without shoes. The height was measured with feet placed side by side and head on Frankfort plane (eye triangle and the top of earlap at the same line). During evaluation of body mass index (BMI kg/m2), borderline values BMI <30 and BMI  30 were obtained. 7,8  Data was evaluated on SPSS program version 20 and statistical analysis of the numbers, averages, percentage distribution and standard deviation were calculated. Congruence of data to normal dispersion was evaluated using Kolmogorov-Smirnov Z test. Since they did not show congruence to dispersion (p< 0.0 5) from nonparametric tests, the chi-square analysis was performed and the relationship between variables was scrutinised with Spearman's rho test and logistic regression analysis. The analysis of all the data showed p<0.05 to be statistically significant. 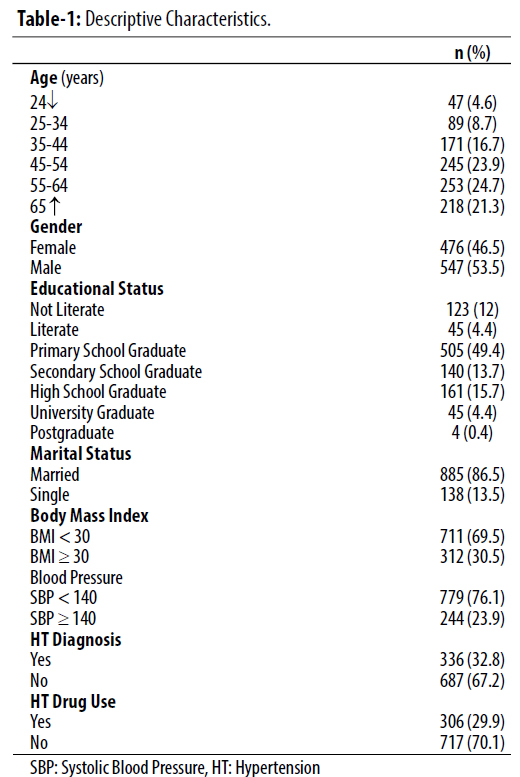 In the study group, the mean SBP was higher in males 132 (54.1%) than in women and it increased with age. The mean SBP was also higher in individuals diagnosed with hypertension compared to those without HP. Variables such as gender, age and diagnosis of HT, constitute important risk factors for those with HT (p<0.05) Table 2. 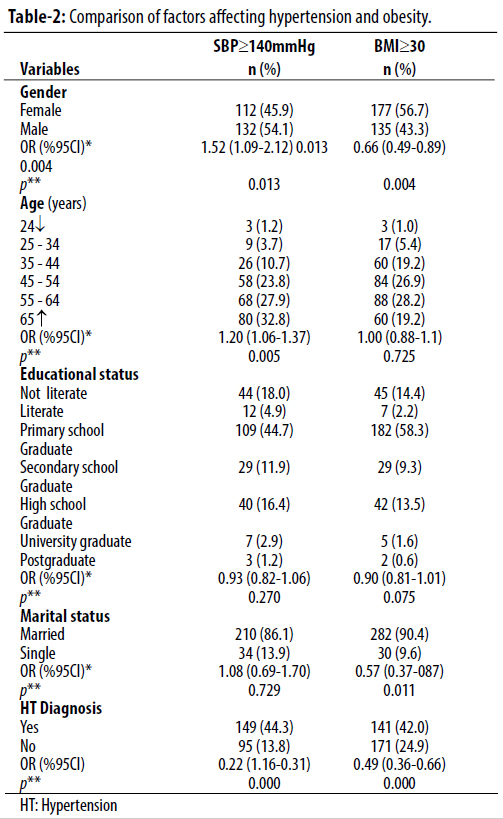 Obesity is more prevalent in women 177 (56.7%) than in men and the incidence of obesity is higher in married individuals. Gender, marital status and being diagnosed with HT are important risk factors in development of obesity (p<0.05) Table 2. When the association between SBP and obesity was evaluated, a statistically significant relationship was observed between HT and obesity (r=0.68 p=0.03).

Presently the number of studies carried out related to HT and obesity, have demonstrated that their prevalence is rapidly increasing worldwide. Despite of preventive measures taken, there is a worrisome increase observed in both, the prevalence of hypertension and obesity in developed as well as under-developed countries. 9-11  According to studies carried out in our country, the prevalence of HT varies between 24.2% to 44.0%.4,6,12 Global HT prevalence, genetics, demographic and sociocultural differences are found at extreme ends (5.2%- 70.7%) due to the various methods used for the studies.9,13,14 In this study, the HT prevalence was 23.9%. Even though HT prevalence found in the population varies the rate of HT incidence is generally high. When literature was reviewed, it was observed that HT prevalence was between 14.1% to 39.8% in men and between 29.5 to 32.3% in women. 4,6,11,15 While several study findings suggested that HT prevalence was higher in women, there are studies stating that it is more prevalent in men. One study, 16  found hypertension prevalence to be vary between 30.2% to 45.8% in men and between 23.8% to 40.3% in women. Another study, 17  found HT rate to be 58.5% in men and 41.5% in women. 17  When SBP averages according to gender were examined, the present study found the incidence of HT in men to be higher but any statistically significantly difference could not be found (Table 2). It is reported that the risk for hypertension increases progressively with age. 6,14,18 In one study, 19  the HT prevalence was as high as 70% in 60-69-year age group, 76% in 70-79-year age group and 79.7% in 80-years old and above. Our present study is consistent with the literature on hypertension prevalence that increases with age, in both men and women. The incidence of hypertension increases 3.63 fold in women and 2.83 fold in men of 65 years old or above. Therefore, it can be said that age is also an important risk factor for hypertension. In our present study, obesity prevalence was 30.5%. According to data of Nourishment and Health Research,1 the obesity prevalence in Turkey is 30.3%. According to Turkish Statistical Institute20  data, it is 19.9%. Recently a number of studies related to obesity were carried out in various regions of Turkey and according to these studies, obesity prevalence was found between 23.4% to 31.7%.6,21 In six 12-year studies carried out in Asia, Africa and Europe by WHO, an increase in obesity prevalence between 10to 30% was reported over 10 years. Results of the studies indicate over-weight individuals were mostly in countries such as Albania, Bosnia-Herzegovina and England (Scotland), while those with overweight tendency was less and lived in Turkmenistan and Uzbekistan. 1  There are differences in obesity prevalence in other studies which may be to due them being carried out in different regions where people's dietary habits vary. However, the results of those studies unanimously indicate overall obesity prevalence to be considerably high. When the distribution of obesity according to gender is examined in literature, it was observed that the prevalence of obesity was between 24.5% to 41% in women and 12.9% to 20.7% in men.1,6,20,21 According to a number of studies carried out on adults in Europe, the tendency to be over-weight was between 32% to 79% in men and 28% to 78% in women; whereas obesity prevalence was between 5% to 23% in men and 7% to 36% in women. 1  In our present study, the obesity prevalence was 0.6 fold higher in men and which is consistent with literature. Higher obesity rate in women than in men is thought to be resulting from physiological and biological factors such as, sedentary lifestyle, rapid diet, consumption of foods with higher calories, pregnancy, parity, length of time breast feeding , marriage and menopause. 22Obesity is considered a significant risk factor in the development of HT. Findings of several epidemiologic studies carried out among different populations demonstrated that obesity is an independent risk factor for hypertension.9,10,23 The present study examined the relationship between HT and obesity and determined that incidence of HT was 1.4 times higher. From the literature reviewed, the possibility of hypertension in obese individuals is 2 to 3 times higher and at least 1/3 to 2/3 of hypertensive people are obese. 9,10 Moreover, compared to individuals having BMI within normal limits, overweight people are found 1.8 to 2.0 times more hypertensive while obese people are 2.2 to 5.1 times more hy per tensive. 13,24 Another study, 25  found that development of HT in obese individuals increases 2 folds.

Disclaimer: None.
Conflict of Interest: None
Source of Funding: None