Objective: To determine the prevalence of resistant pathogens and their antimicrobial susceptibility pattern in an intensive care unit.
Method: The cross-sectional observational study was conducted at Foundation Hospital, Rawalpindi, Pakistan, from May to September 2016, and comprised tracheal tubes which were collected in sputum culture bottles from patients with clinical findings of ventilator associated pneumonia. The tubes were cultured to locate the resistant pathogens.
Result: A total of 113 different strains of bacteria were isolated from 80 patients. The main isolated bacteria was acinetobacter baumannii 45(39.8%) followed by klebsiella pneumonia 14(12.3%) and methicillin-resistant staphylococcus aureus 13(11.5%). Polymyxin B was the most appropriate drug for treating patients infected with acinetobacter baumannii with a sensitivity of 64% while vancomycin and linez oli dhad 100% sensitivity for methicill in - resistant staphylococcusaureus.
Conclusion: Acinetobacter baumannii was the most prevalent strain in tracheal tubes and polymyxin B was the most effective medicine.
Keywords: Nosocomial infections, Tracheal tubes, Antimicrobial resistance. (JPMA 69: 981; 2019)

A number of host defence mechanisms protects the trachea and lungs from bacterial infection. These host defences not only filter and humidify air but also trap the invaders and then clear the airway with the aid of coughing, mucous and cilia. Furthermore, humoral and cellular immune mechanisms also play their active role in eradicating infectious agents.1,2 However, in critically ill patients, host defences may be impaired and aid in establishing infection. 3 Moreover, in these patients the endotracheal tube (ETT ) not only impairs mucocilliary clearance and cough reflex, but also facilitates bacteria entry into the lower respiratory tract by permitting leakage of secretions around the ETT cuff. It also prevents the exit of bacteria from the lower airway, creating a need for manual tracheobroncheal suctioning. Nonetheless, suctioning can further upsurge the risk of embolisation of biofilm mass associated with ETT. 4-6 In addition, ETT insertion could cause injury and infection of the lower respiratory tract. 7,8 Ventilator- associated pneumonia ( VA P ) i s th e inflammation to lung parenchyma in any inpatient on mechanical ventilator for more than 2 days. VAP is the most common and most fatal type of hospital-acquired pneumonia (HAP). It needs to be subjected to prompt diagnosis and apposite treatment. 9 The time of onset of pneumonia is an important risk factor for specific pathogens and outcome in patients with VAP. Early onset VAP, defined as occurring within the first 4 days of hospitalisation, is usually caused by antibiotic-sensitive bacteria, which means community-acquired bacteria, whereas the late onset VAP, more than 5 days, is associated with increased mortality in patients. 10 The emergence of multi-drug resistant (MDR) pathogens has invalidated all the available treatment and principally the MDR pathogens in intensive care unit (ICU) patient is a major cause of morbidity and mortality. MDR biofilmforming pathogens are particularly more notorious in a variety of device-related infections. 11 The microbes residing in biofilms are almost 1000 times more resistant than the planktonic microbes and are not only protected from the effect of antibiotics but also from host defence mechanisms, making treatment not only difficult, but, in most cases, requiring device with dr awal . 12 Bacterial biofilm has been observed universally on the surface of ETT in mechanically ventilated patients. 13 Some data shows a good concordance between bacterial colonisation of the airway and microbial findings in the biofilm. Even the same microorganisms causing VAP could be found in the ETT biofilm, leading to the potential implication of biofilm in the genesis of VAP. Pathogens associated with VAP are the main cause of treatment failure and relapse of infection. 14 The current study was planned to identify the bacterial pathogens causing VAP in an ICU setting and to ascertain the antibiotic profile. 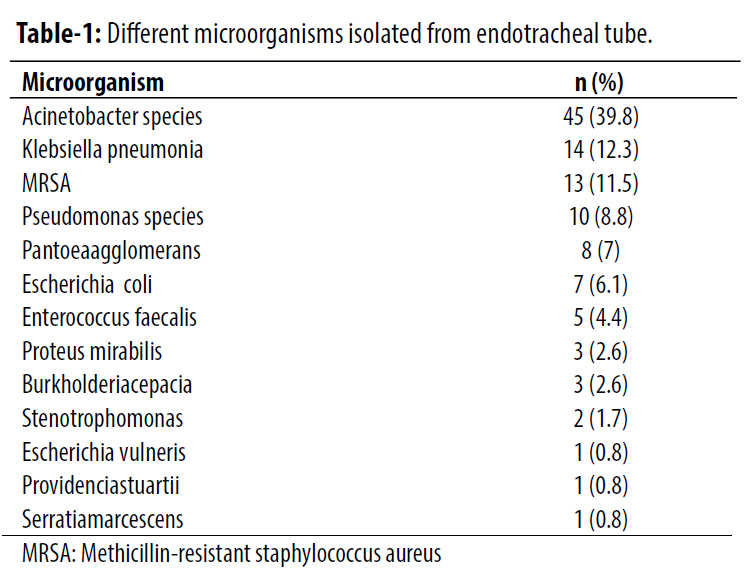 PB was the most appropriate drug for treating patients infected with acinetobacter baumannii with a sensitivity of 64% while VA and LZD had 100% sensitivity for MRSA (Table 2). 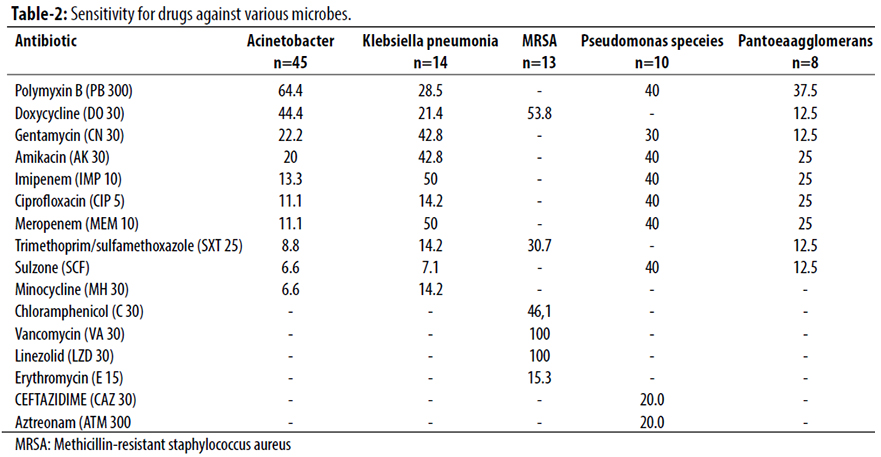 The current study was done to determine the prevalence of MDR pathogens in ETT. VAP remains the leading cause of death in patients with ICU-acquired infections associated with an attributable mortality of around 30%. Increasing antimicrobial resistance in patients with VAP challenges intensivists to search for alternative therapeutic options. 14  Acinetobacter (A.) species were found to be the most resistant pathogens prevailing in our ICU setup, followed by klebsiella (K.) species, MRSA and Pseudomonas (P.) species (spp.) bacteria. A. baumannii has become endemic in hospitals due to its versatile genetic machinery, which allows it to quickly evolve resistance factors, and to its remarkable ability to tolerate harsh environments. Infections and outbreaks caused by MDR-AB are prevalent and have been reported worldwide over the past 20 or more years. 16 A. species were also the most prevalent in a previous study. 17 The growing epidemic of infections in the ICU caused by MDR pathogens has led clinicians to reconsider prescribing pPB and colistin (polymyxin E) drugs that were removed from use in the past because of their neuro- and nephrotoxicity. 17 An earlier study evaluated the efficacy of PB in MDR pathogens when there is very narrow choice. 18 In case of A. baumannii, 64% of the cultures were susceptible to PB and 44% against DO, 50% of K. species were sensitive to MEM. VA was found to be 100% sensitive for MRSA. For pseudomonas, multiple antibiotics, like PB, AK, IMP, CIP, MEM and SCF displayed 40% sensitivity. For Pantoeaagglomerans, PB was the most effective drug (37%). In a previous study, incidence of VAP was found to be 44.2% among the mechanically ventilated patients and K. pneumoniae (34%) was the most common pathogen isolated, followed by P. aeruginosa (20%). Among them, most of the K. pneumoniae and P. aeruginosa isolates were resistant to penicillins, cephalosporins, fluoroquinolones, but were sensit ive to piperacillin /tazobac tum, cefaperazone/sulbactum, and carbapenems. All isolates were sensitive to AK. 19 However, in the present study K. pneumoniae displayed 42% sensitivity to AK and pseudomonas was 40% sensitive.

PB was found to be the most appropriate drug for treating patients with A. baumannii. DO was another good option As K. pneumoniae revealed better sensitivity to c arbapenems and ami noglycosid es. For MR SA, glycopepetides was the drug of choice. P. aeruginosa showed equal susceptibility to carbapenem, aminoglycosides and polymyxins.