Breast cancer is not only the most commonly diagnosed malignancy among females, but also a leading cause of cancer-related deaths throughout the world.1 According to a report, Pakistan has the highest rate of breast cancer mortality and morbidity in Asia with 90,000 cases reported annually and more than 40,000 deaths. 2 Even then, its aetiology is not entirely explored yet. Breast cancer incidence and mortality varies tremendously among various ethnic groups and in different geographical locations. Once breast cancer was considered a disease of the Western women, but now Asians are also facing an alarming situation due to continuous increase in its incidence. It is obvious that increasing rate of breast cancer had damaging effect on public health and generated a burden on society as well. 3-5 Scientific knowledge has proved that breast cancer development is a multi-factorial  disease involving culture, lifestyle, environment and genetics. 6 Studies showed lower risk of breast cancer among immigrant Swedish women representing immense role of lifestyle in disease development. 7 Breast cancer risk fac tors var ied amon g premenopausal and postmenopausal Hispanic migrants as well. 8 Therefore, it was required to evaluate all the possible risk factors for a better understanding of breast cancer aetiology. Age is considered one of the most important risk factors in breast cancer incidence. Its incidence even in the young women also varied with ethnicity and race. Breast cancer was more common in white women aged over 45 years compared to blacks. However, black women aged under 35 years had more than two-fold chance of having invasive breast cancer and three-fold increased breast cancer mortality than young white women. 9-11 In the United States, about 7% of women were diagnosed with breast cancer before the age of 40 years. Older women face poor survival rates compared to the young ones and it was reported that younger age was an independent prognostic factor for adverse disease outcome. 12 Obesity was one of the growing health problems throughout the world. Being overweight meant that a woman had increased risk of postmenopausal breast cancer. Evidence also illustrated that it was associated with poor prognosis in patients diagnosed with earlystage breast cancer. Many studies suggested that patients who were obese at the time of breast cancer diagnosis were more prone to cancer recurrence and early death compared to the leaner ones. Even breast cancer patients who became overweight after diagnosis may also be at manifold increased risk of poor treatment outcomes. 13,14Menarche and menopause were basically markers of onset and termination of many endocrine-related activities associated with reproduction. Ovary produces steroid hormones, directly involved in the breast development and functioning. Both early menarche or late menopause were responsible for increased breast cancer risk as reported by a meta-analysis of the Collaborative Group on Hormonal Factors in Breast Cancer. 15,16Clinical and epidemiological data showed that increased breast cancer risk can be managed by different interventions in lifestyle, hormonal balance and surgery. Aromatase inhibitors and oestrogen receptor modulators could reduce the increasing burden of breast cancer in high-risk populations. 17 As demographic incidence of breast cancer had showed substantial difference between various populations, it merits in- depth investigation of breast cancer development and its associated risk factors. The current study was planned to investigate clinic pathological details of breast cancer patients, and to have a look at the survival rate of breast cancer patients undergoing different treatments.

The multi-centric, perspective cohort study was conducted at Shifa International Hospital, Islamabad, Holy Family Hospital, Rawalpindi, Benazir Bhutto Shaheed Hospital, Rawalpindi, District Headquarters Hospital (DHQ), Rawalpindi, and Combined Military Hospital (CMH), Rawalpindi, Pakistan, from September 2014, to February 2018. After obtaining approval from the institutional review boards of all the five hospitals and that of Fatima Jinnah Women University, Rawalpindi, the sample size was calculated with G power software18 taking 5% margin of error, hazard ratio 2 and with 80% power. 19 The calculated sample size was 82 but a greater sample size was targeted to increase study weightage and generalisability of theresults. All patients of breast cancer in the study hospitals were included, but those with missing data and those not willing to participate were excluded. Epidemiological and clinical details of the subjects were collected using a detailed questionnaire from the patients or their attendants and with the help of hospital records after taking written informed consent. Information collected included age, body mass index (BMI), marital status, consanguinity, menarche, menopause, number of pregnancies and children, age at first pregnancy, number of abortions, lactation history, family history, grade and treatment. Patients with BMI 18.5-22.9 kg/m2 were categorised as normal, 23- 24.9 kg/m2 overweight, 25- 29.9.9 kg/m2 obese class I, and more than 30 or above as obese class II as per World Health Organisation (WHO) classifications for Asians. 20 For survival analysis, patient's current status and treatment options were collected through telephonic calls. Patients were contacted after 6 months from the start of the study time and information regarding changes in their treatment was noted. If a patient had died in the intervening time, exact time of death was noted. Patients were divided into three different groups based on treatment, as (i) chemotherapy, (ii) chemotherapy and surgery, and (iii) chemotherapy, surgery and radiotherapy. Death due to any cause and was counted as censored cases in the survival analysis. Time used for survival analysis was basically time to shift from one treatment to the other. Data was analysed using SPSS 24. Breast cancer demographic factors, like age, BMI, age at menarche, ageat first full time pregnancy and number of live births, were expressed as mean and standard deviation. Frequencies and percentages were used to express marital status, consanguinity, menarche, menopause, lactation history, history of abortions, family history of breast cancer, histopathological grade, metastasis and treatments. Kaplan Meier test was used to measure progression-free survival among patients in the three treatment categories. Overall survival was defined as time interval from study entry to any event which was either change of treatment or death. Log rank (Mantel-cox) was used to find the significance of overall treatment. P<0.01 was taken as significant.

Survival analysis showed positive trend of each therapy and there was a statistically significant role (p<0.0001) of all treatments (Table 2).

Trend of deaths in different treatments was also noted (Figure). 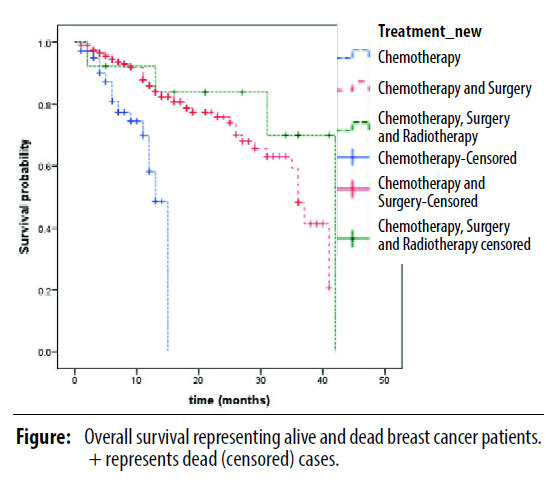 Breast cancer is one of the most common types of cancer among females, and the leading cause of deaths across the world. The current study was conducted to evaluate the role of various risk factors in breast cancer development. At first it was thought that breast cancer was a disease of older age, but the incidence of disease below 40 years of age has become common today. Most of the breast cancer cases were among pre-menopausal women. In the current study, mean age of breast cancer c ases was 44. 3 years and most of them were premenopausal. Cases diagnosed at younger age possess aggressive clinicopathological characteristics and had exclusive biological entity. 1,4,12Obesity was a well-known risk factor in breast cancer development, particularly in postmenopausal women. According to an estimate, annual incidence of breast cancer could be reduced to half just by preventing obesity in the European Union. 21 Risk of breast cancer among obese women varies among different ethnic groups. Mean BMI reported in this study was 27.9 and most of the patients were obese representing an  association between obesity (fat accumulation) and breast cancer risk concordant with already reported results. 22,23 Breast cancer is a heterogenous disease both histologically and molecularly. It had distinct subtypes that varied in disease development, progression, response to treatment and disease-free survival. Diverse clinicopathological and  molecular tests were performed to assess disease progression, suggest most appropriate treatment and dosage regimes for breast cancer patients. Necessary information required for proper diagnosis and treatment includes age, family history, tumour size, lymph node status, histological grade, lymph vessel invasion, oestrogen (ER) / progesterone (PR) status, human epidermal growth factor receptor 2 (HER2) status, and evaluation of tumour margins. 24 In the current study, many patients had maternal history of breast cancer as reported in literature. Correlation exists between parity, consanguinity and age at first full-term pregnancy and is linked with increased breast cancer risk. 23,25 Chemotherapy was used in the treatment of early-stage invasive breast cancer, but in some cases, it was given before surgery as well to shrink cancer. Many of the breast cancer patients had undergone different types of surgeries during treatment. Radiotherapy was a highly targeted and effective procedure to kill cancerous cells. Cases enrolled in the current study had gone through all these treatments at different stages. Overall survival rate was good with combination of these treatments. Survival differences were not the only factor in selecting chemotherapy, surgery or radiotherapy for breast cancertreatment. Differences between these local therapies did not involve greater effects on 3.6-year survival, but there are chances of noticeable effects on long-term survival. 26,27

Disclaimer: The study is a part of a PhD thesis.
Conflict of Interest: None.
Source of funding: None.