Going to a university may be a life-changing experience for a lot of individuals, but for some students this experience can lead to psychological distress.1 The transformation from college to university life may prove to be challenging for students owing to the new circumstances such as assignments, peer pressure, improbability, deadlines and competitive examinations, all of which may lead to psychological stress. 1,2This stress beyond a certain level can affect the physical and mental health of students, which can also be linked with poor academic outcomes. 1,3,4Recently an increasing concern regarding psychological distress among undergraduate medical students has been observed3 because of comparatively higher levels of stress, with signs of depression and even suicidal thoughts. 3,5,6 According to a study conducted in Pakistan, the most frequent causes of stress among medical students were associated with psychosocial and academic concerns. 3 Perhaps that is the reason a negative correlation was observed between perceived stress and academic performance, implying that students who were more concerned about their studies also took greater stress, but this correlation was not significant.3 Literature also suggests a greater level of psychological stress associated with female gender. 3,7,8According to another study conducted in Pakistan, financial status, education expenditure, order of birth and number of siblings in the family had no effect on the prevalence of stress among students. 9 It is also suggested that psychological help and counseling should be provided to students who are at a greater risk of depression and anxiety. 9 The prevalence of elevated levels of psychological stress and morbidity is well known in medical students, but not so well documented in physical therapy (PT) students. 1 In fact it is shown that almost 71% of undergraduate PT students feel that the difficulty level of course was greater than expected. 10 According to a study conducted on undergraduate physical therapy students in Ireland, 27% students exhibited plausible psychological morbidity, which is much higher than the general population. 1 The study also suggested that changes in factors related to the curriculum can have positive effects on the academic  causes of psychological distress. 1 A study conducted in Islamabad, Pakistan, in 2008-10 also showed high levels of psychological distress among undergraduate PT students. 7 According to a study conducted in New Zealand in 2008-09, depression and anxiety among students was also associated with satisfaction with life. 8 Moreover, the satisfaction with life is shown to be higher among medical students compared to allied health and nursing students. 8 Evidence suggests high levels of stress among medical students in Pakistan, but literature regarding stress among physical therapy students is not  sufficient. Moreover, there is a need to establish a relat ion ship between psyc ho logic al stress an d satisfaction with life among PT students in Pakistan, on which the literature is scarce. The current study was planned to determine the prevalence of perceived stress and satisfaction with life, as well as association between the two among undergraduate PT students in Pakistan. Subjects and Methods The cross-sectional study was conducted from January to July 2015 at Riphah International University (RIU), Isra University (IU) and Foundation University (FU), Islamabad. Data was collected from students registered in the Doctor of Physical Therapy (DPT ) programme at the three institutions. After obtaining ethical approval from the FU review committee, full-time DPT students aged 17-23 years of either gender were included. For an estimated population size of 1500, the sample size was calculated using Raosoft calculator, keeping 5% margin of error, 95% confidence level and 50% response distribution. 11 After receiving consent from the subjects, the study sample was raised using convenience sampling. A questionnaire was used to gather demographic data. Besides, Perceived Stress Scale (PSS) 12 and Satisfaction with Life Scale (SWLS) 13 were used as tools to measure outcome. Data was analysed using SPSS 20. 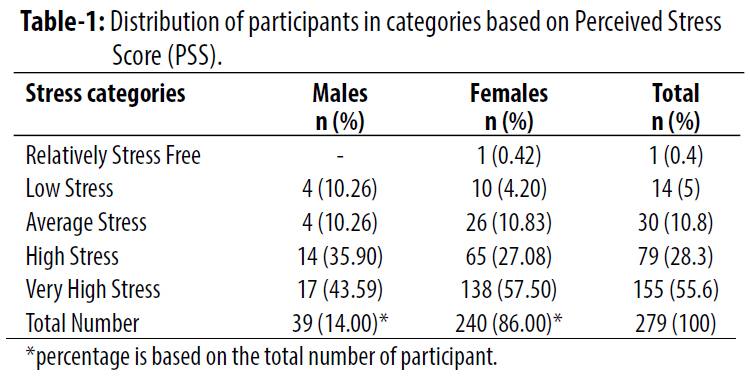 The current study was conducted on undergraduate PT students in Rawalpindi and Islamabad, and looked into the prevalence of perceived stress and satisfaction with life in students, and to see if there was an association between the two. The study showed a mean perceived stress score of 21.35±5.76, whereas a similar study3 on medical students in Lahore showed a mean score of   30.84±7.01. This shows an elevated level of psychological morbidity in both PT and medical students, supported by existing literature as well. 3,5,6 The findings of the current study compared to literature, 3however, show a comparatively lesser level of psychological morbidity among undergraduate PT students compared to medical students. This finding is contradicted by earlier findings,8 showing undergraduate medical students to be more satisfied with life compared to allied health and nursing students. The current study found 55.6% students to be under very high stress, 28.3% high stress, 10.8% average stress, 5% low stress and 0.4% to be relatively stress-free. A similar study in Islamabad showed 6% students as severely stressed, 40% moderately stressed and 42% mildly stressed. 1 The current study also compared the perceived stress levels between male and female students and found a significant difference (p<0.05) between the two, showing female students to have a significantly greater level of perceived stress, which is in accordance with literature. 3,7,8The mean satisfaction with life score for participants in the current study was 24.49±5.77 and most of the students were satisfied with life. This score was similar to the mean score of 24.9±6.4 reported in a study. 8 Moreover, with a mean satisfaction with life score of 26.74±6.095, males had a significantly (p<0.05) higher score compared to females with a mean score of 24.13±5.644. This shows that male students were more satisfied with life compared to female students. Moreover the current study also showed a significant negative correlation between satisfaction with life and perceived stress, implying that greater satisfaction with life results in lesser psychological stress and morbidity which is in line with literature. 8 Among DPT students in Islamabad, a greater population of females is present and that is why a lower ratio of males compared to females was present in the current sample which was representative of the population parameter selected. Moreover, probability/random sampling technique with a greater population parameter and sample size can improve the generalisability of the results. Association of academic performance with perceived stress and satisfaction with life should also have been analysed. It would be beneficial if coping strategies in response to psychological distress can also be analysed in future studies.