Critical Thinking: Perception and disposition of students in a Medical College of Pakistan

Objective: To determine the perception and disposition of medical students towards critical thinking.

Methods: The cross-sectional study was carried out from July 1, 2015, to March 30, 2016, at Gujranwala Medical College, Gujranwala, Pakistan, and comprised undergraduate medical students. Student's perception about critical thinking was assessed through a self-administered questionnaire and the standard California Critical Thinking Disposition Inventory. Data was analysed using SPSS 21.

Conclusion: Most medical students were found to have a positive perception but they were not disposed towards critical thinking.

Critical thinking is a "process of purposeful, selfregulatory judgment which results in interpretation, analysis, evaluation and inference". Medical students should learn how to analyse information, evaluate alternatives and argue with logical reasoning. Critical thinking skills are not just helpful in performing well in college, but are also needed in the work environment where conclusions are to be drawn with great care and independence.1,2 The ideal critical thinker has many different qualities, like being habitually inquisitive, well-informed, trustful of reason, and open-minded in evaluation. He or she should be honest in facing personal   biases, prudent in making judgments, willing to reconsider, clear about issues, orderly in complex matters, diligent in seeking relevant information, reasonable in the selection of criteria, focused on inquiry and persistent in seeking results which are as precise as the subject and the circumstances of inquiry permit. 2 In simple words, we can say that critical thinking is rational reflective thinking on what to believe or what to do. Every critical thinker should have the ability to raise six critical questions about any situation or scenario: why, how, what, where, when, and who. 3 But the first two are the most important questions, as they require the learnerto explain and reason to support a claim. 4 Disposition is defined as one's inclination towards critical thinking when encountered with problems to solve, ideas to evaluate, and decisions to make. 5,6General opinion about critical thinking is negative, but in the context of medical education, it produces positiveresults. 7 High order thinking or critical thinking let the students analyse and evaluate their knowledge and create something new and productive in medicine and health system. 8 Creativity gives them a sense of uniqueness, which boosts their self-confidence. 9 This kind of inquisitive attitude creates a positive impact on healthcare delivery (diagnosing, evaluating patent's problems precisely and communicating with them effectively) and ultimately proves beneficial to the healthcare system at national or international level. 10 There is a growing awareness of the fact that several medical students do not have the expected professional abilities, including critical thinking. 11-13 The current study was planned to determine the  perception and disposition of medical students towards critical thinking and its socio-demographic correlates.

The descriptive cross-sectional study was carried out from July 1, 2015, to March 30, 2016, at Gujranwala Medical College (GMC), Gujranwala, Pakistan, and comprised undergraduate medical students. Approval was obtained from the institutional ethics review board, and informed consent was taken from the participants. Total registered students for MBBS course at the GMC were 500 (100 students in each class) with a 3:1 femaleto- male ratio. At 95% confidence level and 5% margin of error, the estimated sample size was 197, taking positive disposition towards critical thinking as 78%.5 Using non-probability convenient sampling, medical undergraduates from all the five classes were enrolled. Data were collected through a struc tured selfadministered proforma which consisted of three parts. The first part consisted of socio-demographic data, like name, gender, age, residency, father's occupation, mother's occupation, study year, and marks in thepreceding year annual exam. The second part was about student's perspective about critical thinking. The third part contained the standard questionnaire of the California Critical Thinking Disposition Inventory (CCTDI) 14 which was used due to its worldwide use and proven authenticity. 15,16The Cronbach's alpha reliability for the CCTDI overall score is 0.90; the seven sub-scales are between 0.71 and 0.80.14 CCTDI comprises 75 declarative statements that express familiar views, values and anticipations towards the seven dispositions which are: Truth seeking, which is an audacious desire for the best knowledge, even if such knowledge fails to support or challenge one's previous beliefs or self-interests; openmindedness, which is tolerance to conflicting views, selfmonitoring for possible error; analyticity, which is the application of reasoning and evidence, the ability to be alert to problematic solutions, and inclined to get ideas of consequences; systematicity, which is appreciating organisations, focus and thorough ness while approaching complex problems at all levels; selfconfidence, which is seeing oneself as a good thinker and believing in one's own reasoning skills ; inquisitiveness, which is the presence of interest and enthusiasm to acquire knowledge and learn explanations even when the practical use of the knowledge is not immediately known; and maturity, which is careful attitude in making, appending or revising a judgment, and an awareness of the fact that multiple solutions can be acceptable, and having the guts to reach a conclusion even when there is lack of complete knowledge. 17 Each CCTDI subscale consists of 9 to 12 statements. The CCTDI reports eight scores; the range of overall score is 75-450, and the range of each of the seven subscale's score is 9-72. The recommended cut-off value of CCTDI total score is 280, the target score is 350, and subscale scores are 40-50. To a given disposition of a subscale, a score of 30 or less indicates weakness, 40 indicates average score, and 50 and above indicates strength. 14,18To calculate subscale score, raw scores are multiplied by 10 and divided by the number of statements in that subscale. Subscale scores between 40 and 60 indicate positive disposition towards that particular subscale of critical thinking and below 30 indicates strong opposition. Scores between 30 and 39 indicate ambivalence. Total scores above 350 indicate a strong positive disposition towards critical thinking while scores between 280 and 350 indicate positive inclination. Scores below 210 indicate strong opposition towards critical thinking while scores between 210 and 279 fall in the ambivalent range. 19 Participants were requested to rate on a 6-point Likert scale according to their inclination toward given statements, from their level of agreement to disagreement. The scale ranged from strongly agree=1 to strongly disagree=6. Mode of administration was paper and pen. SPSS 21 was used for data analysis. Data was described using frequencies and percentages for qualitative variables, like gender and positive perception, and mean and standard deviation for quantitative variables like CCTDI scores in all domains. Data were cross-tabulated for socio-demographic variables with mean scores in all domains of critical thinking. Chi square test was applied to determine the post-stratification difference regarding disposition towards critical thinking and qualitative variables. Independent sample t test was applied to determine the distribution of mean CCTDI scores as categorical variables with dichotomous answer. P0.05 was taken as significant. 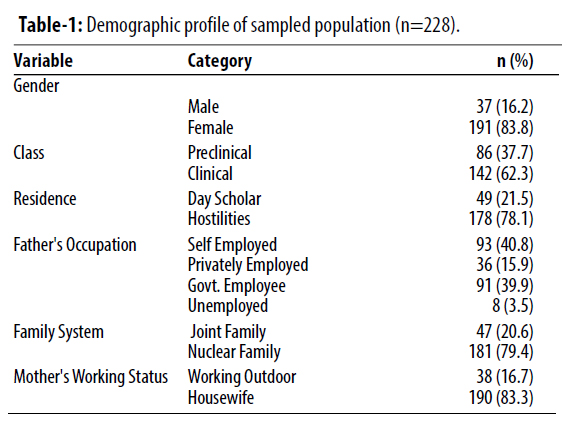 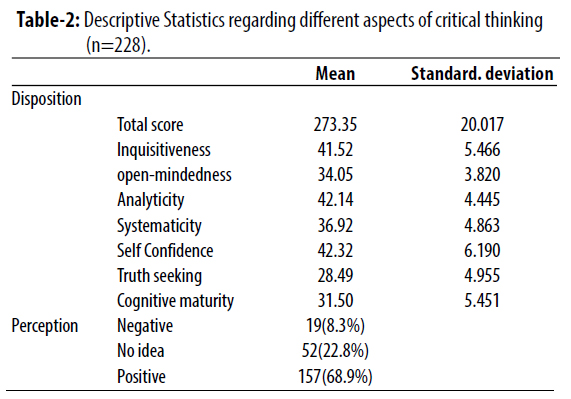 To the best of our knowledge, this is the first study of itskind which has evaluated the disposition and perception of medical students towards critical thinking. In the study, 33.8% medical students in the selected sample were disposed towards critical thinking. In a study conducted among American undergraduates, 78% students showed positive disposition towards critical thinking. 5 This comparison suggests that Pakistani medical students' critical thinking disposition is very low as compared to that of American students. Prior researches also show that students of some Asian countries, such as Iran, China, Japan and Hong Kong, have less critical thinking disposition than other non-Asian countries. 20,21This difference may be due to different culture and traditional education system in Asian countries. It is important to mention the hidden fact in our findings that nobody was negatively disposed towards critical thinking, as no one  scored below 210. In Pakistani culture, critical questions and unconventional views are seldom valued, and children who question authority are often considered ill-mannered or rude, and are criticised for their behaviour. Topic discussion in classrooms is mainly teacher-oriented, and students practically do not participate in discussions because they are not encouraged or trained to do so. Also they are afraid of losing face in front of other students if they are unable to answer. 22 The results call for review of medical education system at undergraduate level in Pakistan. To inoculate critical thinking skill in medical students, they should be trained by professional teachers23 who engage them to ask critical questions about the topic24 and create a healthy environment for discussion. Mostly students in this study perceive critical thinking as positive thinking, although majority are not disposed towards CT but this positive attitude helps them to improve their cognitive and critical assessment skills if they are provided with opportunities. 25 The current study showed that medical students had weakness in relation to truth seeking and had strength in self-confidence. Similar results have been shown in studies on nursing undergraduates which proposed that a lower score of truth seeking could be because of traditional teaching and learning strategies. 26 No such data is available in our country to compare the results with. In our study, we found no difference between students of clinical classes and preclinical classes in six domains of critical thinking. Only truth seeking was significantly different. It implies that current practices in medical education are not sufficient to create an impact on students thinking skills. In studies by Stupnisky et al., and Giancarlo et al. there is increase disposition with time spent in a college for general and medical education. 5,27In medicine, the experience generally increases the critical thinking and decision-making skills. 22,28,29 There are many factors related to development of critical thinking but the major difference may be created by changing the curriculum of medical colleges from traditional to problem based curriculum. Problem or team based learning has shown better decision making and critical thinking skills among students. An initial exposure to real or simulated clinical situation may help the students to build better disposition towards critical thinking.23,30,31 The simulated and virtual teaching techniques are replacing traditional teaching style. A student centered approach in this regard will ultimately have a positive influence on critical thinking domains. 32  The strength of the current study includes its large sample size with versatile population representing different ethnic origins, and a standardised data collection tool. Its singlecentre nature and non-probability sampling are its limitations.

Majority of medical students were found to be negatively disposed towards critical thinking even though positive perception was reported in three-fourth of the sample. We have to refocus on the intended learning objectives of our graduate medical education programme. We may need restructuring of the curriculum and teaching  strategies to instil critical thinking in our students.

13. Major CH, Palmer B. Assessing the effectiveness of problem-based learning in higher education: Lessons from the literature. Academic Exchange Quarterly 2001; 5: 4-9.

25. It Takes a Positive Attitude to Achieve Positive Results. [Online]