The nature of smartphone is very joyful and attractive. In terms of psychology, researches have presented that excessive use of smartphone depresses social relationships and enhances isolation, depression and social anxiety, resulting in mental immaturity like emotional instability, children's lack of attention and self-control.1,2 Various studies have shown that among regular chatting and gossiping individuals, night-time has been the favourite. A Cohort3 found that increased cell phone usage was associated with sleeping problems. It concluded that important contributing factors that disrupt sleeping pattern were mobile rings and vibrations at night that leads to disturbed sleep pattern and increased mobile phone usage after evening until midnight for chatting. Mass media can also encourage children to spend less time with their parents and families and in outdoor activities that can lead to aggression and isolation among them over a period of time. Children may be exposed to bullying, hate and violence on social media that can induce negative and harmful effects on their psychological wellbeing. 4 According to a 2012 survey of internet users aged 5-49 years by the National Information Society Agency, internet addiction rate was 7.2%, and in South Korea 223,000 people were found to be addicted to the internet. The highest rate of addiction was 10.7% which was among the teenagers. Among those who were in their 20s, the rate was 9% and 7.3% was the rate among children aged 5-9 years. 5 A Pakistani study6 on cell phone usage patterns among teenagers of southern Punjab reported that cell phones had become indispensable for the youths. Regardless of certain gains, the heightened usage of smartphones has brought up numerous questions on the undesirable impact on academics, health and character-building of smartphone users. The current study was planned to analyse the effects of smartphone usage on the psychological wellbeing of school-going children.

The descriptive cross-sectional community household survey was conducted from January 2 to May 2, 2017, in all the 10 towns of Lahore, Pakistan. Through multistage sampling technique, two neighbouring localities were randomly selected from each town as follows: Johar Town and Township from Allama Iqbal Town; Taj Pura and Mughal Pura from Aziz Bhatti Town; R.A. Bazar and Cavalary Ground from Cantonment; Anarkali and Qila Gujjar Singh from Data Ganj Baksh Town; Model Town and Gulberg III from Gulberg Town; Green Town and Defence Housing Authority (DHA) from Nishtar Town; Shahdrah and Qila Lachman Singh from Ravi Town; Gulshan-e-Ravi and Muslim Town from Samanabad Town; Begumpura and Shadbagh from Shalimar Town; and Daroghwala and Rivaz Garden from Wagah Town. The anticipated population proportion was 72% i.e. 0.72, the probability of failure was 0.28, the level of significance 1.96 and absolute precision required on either side of proportion was 5%. By placing these values in the relevant formula, 7 the sample size was calculated. All school-going children aged 5-16 years without any congenital health problem belonging to different socioeconomic background were included, while those who were smartphone users but had congenital health problems were excluded. Data was collected through a structured questionnaire that was divided into two sections. The first section had questions regarding behaviour-related problems like feeling uncomfortable or anxious in the absence of smartphones, smartphone usage without any purpose, being jealous of anybody's smartphone, smartphone use just before sleeping, and smartphone use immediately after waking up in the morning. The second section of the questionnaire had questions regarding psychological problems, like concentration and learning problems due to smartphone usage, and sleep disturbances. The questionnaire was pretested before actual data collection and was then answered by children 8-16 years of age and by parents of children aged 5-8 years because these children could not independently answer research questions accurately. Children who used smartphones for less than or equal to 2 hours a day were considered short-term smartphone users while children who used smartphones for more than 2 hours a day were considered long-term smartphone users. Data was analysed using SPSS 21. In descriptive statistics, data was analysed in frequencies, percentages and cross tabulations, while inferential statistics included bivariate logistic regression in which odds ratio (OR) was calculated with 95% confidence interval (CI) and two-sided p<0.05 was taken as statistically significant. Ethical approval was taken from Institute of Social and Cultural Studies, University of the Punjab, Lahore, Pakistan; while informed written consent was obtained from both the children and their parents.

Initially, 6200 school-going children were randomly approached. Of them, 4030(65%) responded to the study and 2889(72%) were smartphone users who formed the study sample. Of them, 1993(69%) were short-term smartphone users and 896(31%) were long-term users. Significant associations were found between behavior related problems and smartphone usage (Table 1). 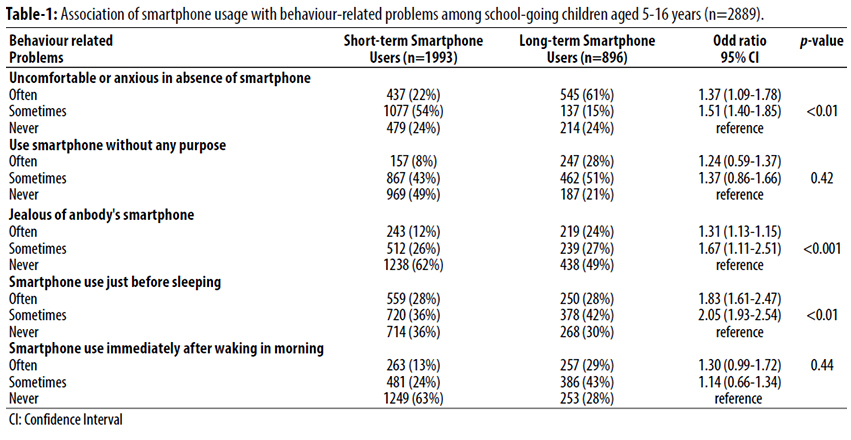 Discussion Study findings revealed that sleep disturbances, inadequate or delayed sleep-wake behaviour are common among children and there were significant association of screen time exposure with wide range of sleep outcomes. Similarly, several studies also addressed various consequences of unnecessary or prolonged use of smartphone screens that may not only affect the general health of individuals but also affects children's physical fitness as well as mental and social development. Thus, the effects of smartphone screen time on sleep patterns and sleep quality among children in the study are in line with literature.8  Playing games and watching videos on smartphones also resulted in addiction. A cross-sectional study9 found that 95% kids who had mobile phones lived in homes, while 73% kids were mobile phone users in an Indian study, and, of them, 70% were aged 7-10 years while 76% were aged 11-14 years. The findings also revealed that most of the families did not use landlines at all. Therefore, if both parents have mobile phones with them it was causing child's increased chance of availability of and access to smartphones at a very young age, resulting in addiction to technological gadgets and reduced physical activity, ultimately leading to obesity. Additionally, another symptom witnessed by school-going children was inability to concentrate on their studies and daily life activities due to social networking sites, online games, making and receiving phone calls, and sending and receiving text messages. A study10 reported that prolonged or excessive use of smartphones distract school-going children away from studies. Another study11 documented similar findings in children aged 5-16 years. Technology use and technology-related anxiety were major prognostic factors for mood and personality disorders in the study. Two studies12,13 explored if anxiety was linked with technology (smartphone) use in teens and young adults showing physiological upsurges in terms of heart rate and blood pressure.14 The findings concluded  significant association between smartphone use and feelings of anxiety. A study15 enrolled young adults using social networking websites five times a day for 2 weeks and assessed mood, loneliness and social interaction patterns. A conventional set of questionnaires were used, including the Beck Depression Inventory (BDI), Rosenberg Self-Esteem Scale (RSES), Social Provision Scale (SPS) and Revised University of California, Los Angeles, (UCLA) Loneliness Scale. The findings concluded that perceptions of subjective wellbeing and life satisfaction may be destabilised among young adults, who with deterioration, may show upsurge in depressive signs and symptoms.

Long-term smar tphone usage was found to be s ign if i c ant ly as so c iated wi th be h avi ou ral an d psychological problems among school-going children. It calls for effective strategies to reduce smartphone usage among children aged 5-16 years.

Disclaimer: Some observations have been driven from the research work of M.Phil thesis.
Conflict of Interest: None.
Source of Funding: None.