We report a case of a 28 year old female who presented to us in November 2016 with a swelling in front of neck for three years and worsening shortness of breath for last one year, causing right sided tracheal deviation and mildSuperior Vena Caval obstruction. X-ray showed a soft tissue density mass in antero-superior mediastinum with cephalad extension. Contrast enhanced CT neck and chest revealed a multi cystic lesion extending from the root of neck to anterior mediastinum causing compression and deviation of trachea, and nearby structures especially Superior Vena Cava (SVC) along with collateral formation. Mass was surgically excised from the neck and mediastinum with uneventful post-operative recovery. Histopathology was consistent with benign mature cystic teratoma.
Keywords: Mediastinal neoplasms, Teratoma, Mature cystic teratoma, Cervical.

Teratomas are non-homogenous pathological entities. The Word TERATOMA, was brought into being by Virchow, meaning a monster.1 In 1953, Willis defined teratomas as true tumours comprising of tissues that are exotic to the body part in which they are present. .2 Although primarily found in gonads, the most common extra-gonadal site of Germ Cell Tumour(GCT) is the mediastinum constitute 10-15% of anterior mediastinal masses. 3 Mature cystic teratomas are the most common among mediastinal GCT's. They usually have a long asymptomatic course and represent 60-70% of all GCTs occurring in mediastinum. 4 Anterior mediastinal teratomas are rare, slow growing, usually 1/3 of patients are asymptomatic, 4 diagnosed incidentally by chest radiographs. 2 We report an unusual case of anterior mediastinalteratoma in a young lady disguised as a neck swelling with significant tracheal compression and mild SVC obstruction syndrome.

A 28 year old female with no known co-morbids from Azad Kashmir in November, 2016 presented to us in General Surgery department of PIMS (Pakistan Institute of Medical Sciences), Islamabad; with a history of swelling in front of the neck for 3 years with worsening dyspnoea and orthopnoea for one year. On examination, a swelling approx. 10*14*4 cm in size, soft-firm in consistency extending from thyroid cartilage to suprasternal notch was noted. Lower limit was not accessible. Engorged superficial veins were visible on the neck and upper chest suggestive of mild SVC obstruction. There were no palpable lymph nodes. Trachea was not palpable in the suprasternal notch. Rest of the chest examination was unremarkable. The X-rays showed a soft tissue density mass, causing anterior mediastinal widening along with cervical extension (Figure-1). 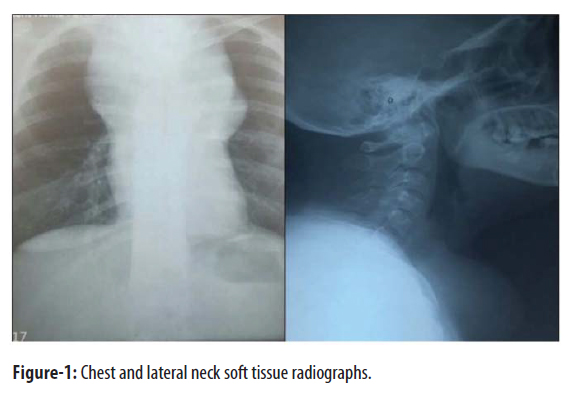 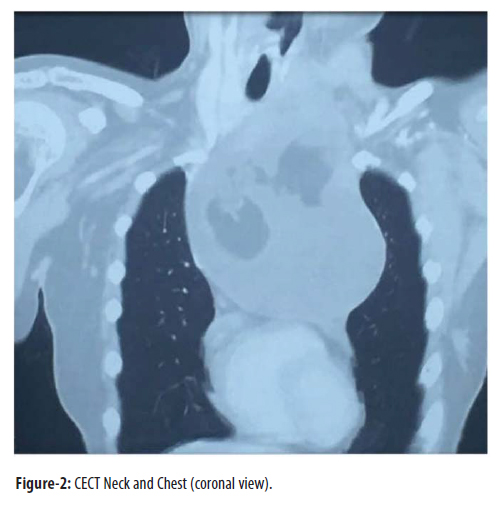 revealed a lobulated cystic lesion present anteriorly in the root of neck, extending down into antero-superior mediastinum, containing islands of fat, measuring 17x 12x13cm, compressing thyroid gland, trachea, great vessels especially SVC, with collateral formation, suggestive of germ cell neoplasm/ thymic mass. Fine needle aspiration cytology showed benign cyst with squamous epithelium and keratin deposits which was suggestive of mature cystic teratoma. Retrosternal thyroid was ruled out with normal thyroid scan and thyroid function tests. Her baseline investigations, echocardiography and tumour alpha fetoprotein, beta HCG markers were all, within normal limits. Before undergoing surgery, comprehensive pre anaesthesia evaluation was done and an informed consent was taken. Risks of prolonged post-operative intubation and circulatory collapse were also taken into consideration. Patient was placed in reverse Trendlenburg position and neck exploration was started under general anaesthesia. A large cystic mass was found adherent to the skin and underlying strap muscles. It was punctured and approximately1500ml of serous fluid was aspirated. Median sternotomy was done and the mass was found lying in antero-superior mediastinum adherent to mediastinal pleurae and pericardium covering SVC and right ventricle (Figure-3). 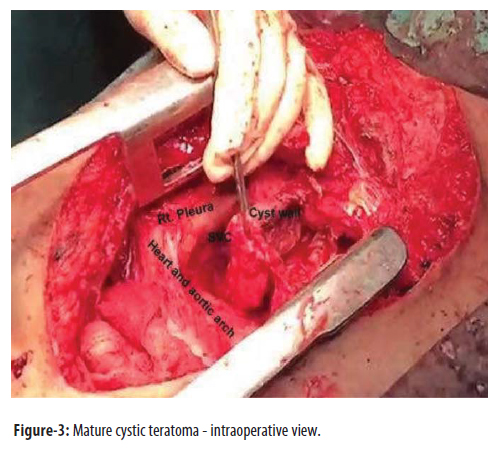 Tumour derived its blood supply as direct branches from internal mammary and anterior intercostal arteries. Mass had no feeding vessels in the neck. Mass was dissected away from its thick fibrous adhesions preserving vital structures. The specimen was subjected to histopathology that revealed mature cystic teratoma; with no evidence of malignant transformation. On 2nd POD, patient was weaned off from ventilatory support. Post-operative CXR showed complete tumour clearance (Figure-4).

Mediastinal and chest drains were removed on 2nd and 4th POD respectively. Follow up was done after 6 months, patient had an unremarkable recovery and there was no evidence of residual or recurrent disease observed with serial x-rays. Patient was advised to follow up after every year. Written consent was taken from the patient for publishing the case.

Teratomas arise from pluripotent germ cells derived from three embryonic layers; primarily ectoderm, and are composed of tissues extrinsic to the organ or anatomical site in which they originate. 2 Mediastinal cystic teratomas usually have a slow, indolent course, often discovered on routine chest x-ray. 5 Anterior mediastinal teratomas occasionally become symptomatic due to compression of nearby mediastinal viscera, malignant transformation or spontaneous rupture. 6 Mediastinal teratomas can rupture in up to 36-41% of cases, resulting in severe symptoms, including chest pain, haemoptysis, dyspnoea and expectoration of hair and sebaceous material, if ruptured into tracheobronchial tree which may lead to acute respiratory distress. 7 Teratomas have been reported to occur in various sites, however, cephalad extension of mediastinal teratomas is even more unfamiliar. Cervical extension of mediastinal tumours has been attributed to the presence of pancreatic tissue8 on histopathology however in our case, no evidence of pancreatic tissue was found to be present on detailed histopathological evaluation. SVC obstruction syndrome is one of the commonest presentation of anterior mediastinal tumours. Late manifestation of SVC obstruction syndrome and tracheal compression in our patient can be attributed to cephalad extension of mediastinal tumour. 6 For such cervico-thoracic masses, the surgical excision approach is median sternotomy along with neck exploration. 9 Tumour adherent to pericardium or pleura should be dealt with meticulously, however literature supports subtotal resection of benign teratomas in order to preserve nearby viscera has shown excellent outcomes. 6

To conclude, cephalad extension of anterior mediastinal teratoma is an unusual presentation. We recommend, cervico-mediastinal teratoma should be ruled out while dealing with cystic neck masses with retrosternal extension. Treatment of choice is surgical excision to avoid drastic complications due to rupture or compression of mediastinal structures.

Disclaimer: Informed written consent was taken from the patient for publishing of the case report along with illustrations.
Conflict of Interest: None to declare.
Funding Disclosure: None to declare