Treatment of Cushing syndrome depends on diagnosis of etiology responsible for hypercortisolism in the body, which sometimes presents with a challenge. Inferior petrosal sinus sampling for ACTH levels, followed by peripheral venous sampling is a proven tool to be a gold standard for differentiating between peripheral and central cause of ACTH dependent Cushing syndrome. This case report is of an elderly female who presented as an outpatient in the endocrinology clinic of Aga Khan university hospital on 22/6/2017 with clinical features of hypercortisolism. After workup she was found to have cushing syndrome secondary to ACTH secreting bronchial carcinoid tumour.
Keywords: Cushing syndrome, BIPSS, carcinoid

Initially described in earlier part of the 20th century by surgeon Harvey Cushing , Cushing syndrome is a complex endocrine disorder characterized by excess levels of serum cortisol.1,2 It can occur secondary to multiple etiologies broadly classified as exogenous (iatrogenic) or endogenous (spontaneous). 3 Endogenous Cushing Syndrome may occur secondary to primary adrenal hyper function however the most common etiology is the elevated ACTH levels which leads to adrenal hyper function and increased serum cortisol levels. 4,5Most common source of elevated ACTH levels is the pituitary adenoma in which case the complex is labeled as Cushing disease while in approximately 20% cases the source of elevated ACTH is ectopic. In this scenario the disease is labeled as ectopic Cushing syndrome. 6 In the latter case the search of etiology sometimes presents as a challenge. 7,8Bilateral Inferior petrosal sinus sampling is considered gold standard for anatomical localization of Cushing disease. 9 It helps distinguish whether the etiology is central or peripheral. 10 Past studies reveal that Inferior petrosal sinus sampling has a sensitivity of 96 - 100% in determining the case of elevated ACTH. 11 Here we present a case of a 67 years old female with Cushing syndrome secondary to carcinoid tumour of the lung in which BIPSS helped determine the cause of elevated serum cortisol levels.

This is a case of a 67 years old female known case of type 2 diabetes mellitus, hypertension and depression referred from another city for evaluation in the outpatient endocrinology clinic of our hospital. The Patient complained of weight gain 8 kg in last 24 months, facial and feet swelling, central obesity, easy bruisability and muscle weakness. Her complaints had developed and exaggerated over time in the last few months. On physical assessment she was a wheel chair bound woman with rounded facies and oedema. Her systemic examination was unremarkable. Her lab work up revealed a normal complete blood count, renal function represented by creatinine and eGFR, however her electrolytes revealed a low serum potassium level measuring 2.6 mmol/l. Her Fasting and random blood glucose levels were raised above baseline representing a recent disturbance in control of her diabetes. Clinical findings raised the possibility of cushing syndrome. A 24 urine cortisol test was ordered which revealed an increase in urinary cortisol measuring >592 microgram/24 hours (Ref: 4.3 to 176) with urine volume 990 ml, confirming the clinical suspicion. A low dose dexamethasone overnight suppression test was carried out in which the patient was administered 1 mg of dexamethasone i/v overnight and the result was serum cortisol 43.5 microgram/dl revealing suppression of the cortisol levels and suggesting that no endogenous abnormality of cortisol secretion by adrenal gland was present ruling out the adrenal cause of cushing syndrome. ACTH levels were performed and the resultwas elevated serum ACTH levels 205pg/ml (ref: 0- 46pg/ml). The ACTH test was repeated and again found raised with the level of 157.2 pg/ml. A preliminary diagnosis of ACTH dependent hypercortisolism was established. MRI brain pituitary protocol was performed to exclude the possibility of pituitary adenoma. MRI brain revealed a questionable tiny pituitary microadenoma however upon re consultation and discussion amongst the departmental meeting a conclusion was reached that the finding was inconclusive to call it as cushing disease.  To further investigate bilateral inferior petrosal sinus sampling was performed. After achieving Vascular Access through bilateral femoral veins. A 4 French vertebral catheter was placed in bilateral inferior petrosal sinuses. Samples were obtained pre vasopressin injection, post vasopressin injection at 5 minutes and 10 mins from both inferior petrosal sinuses and the peripheral blood. The results were as follows: The basal, 5 minute and 10 minute post injection ratio of central to peripheral blood ACTH (Table) was less than 2on all occasions which excluded the central cause of Cushing's syndrome. 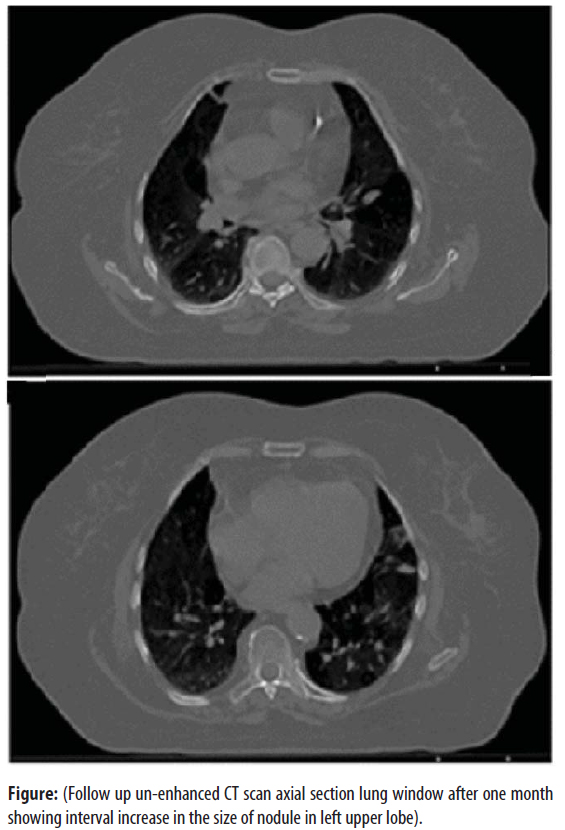 So a CT scan of chest and abdomen was carried out in search for an ectopic source. CT scan chest axial sections revealed a small nodule in left upper lobe. The nodule was small and hence decision was made to follow it up and then perform biopsy. A follow up aftera month revealed interval increase in size of the nodule. PET scan was performed which was negative for any other pulmonary or distant deposits. Left upper lobe lobectomy was performed and histopathology revealed typical carcinoid pulmonary tumour with no regional lymph nodes. Postsurgical laboratory levels revealed ACTH:13.63 pg/ml and a simultaneous normalization of serum cortisol levels. The final conclusive diagnosis was Ectopic cushing syndrome secondary to typical carcinoid pulmonary tumour.

Cushing syndrome is complex metabolic disorder. Symptoms are secondary to the biochemical properties of excess cortisol in the body. The key to treatment of cushing syndrome depend on accurate and timely diagnosis of the etiology. Previously cases have been reported where delay in treatment lead to grave morbidity and sometimes mortality. Inferior petrosal sinus sampling is an invasive test in which the venous channels draining pituitary gland are sampled for ACTH levels. These venous channels are inferior petrosal sinuses. Simultaneously peripheral blood is sampled for ACTH levels. For further confirmation a post vasopressin induced stimulation samples are also obtained. Central to peripheral ratio of ACTH levels of greater than two is suggestive of central cause of elevated ACTH levels which is invariably a pituitary adenoma. BIPSS also enables the physician to establish the side on which the adenoma is located. It is also useful in cases where imaging findings are inconclusive; previously meta analyses have revealed 96 - 100% sensitivity of this test. The major limitation of this test is the lack of wide spread expertise available locally as well as international as well as error occurring during sampling. Despite these limitations BIPSS is an excellent tool in solving the complex riddle cushing syndrome.

Wide spread etiology and variable presentation may possess a challenge to the physician in diagnosing and treating hypercortisolism. Step wise multimodality approach as used in this patient along with biochemicalmarker analysis can result in timely and accurate diagnosis. Bilateral inferior petrosal sinus sampling provide a useful tool to the physician in solving thiscomplex riddle.