To report a case of chondrosarcoma of right big toe with left orbital and left infra temporal metastases. Chondrosarcoma is the second most frequent primary malignant tumour of the bone. A 56 year old man had history of trauma on his right big toe, which was amputated and the biopsy in 2011 at Sindh Institute of Urology and Transplantation (SIUT) revealed chondrosarcoma with clear margins. Eventually the patient was presented with swelling of the left eye, pain and gradual loss of vision of that eye. Later a CT scan of his chest, brain and orbit showed pulmonary and pleural based nodule, with mediastinal and hilar lymphadenopathy representing metastatic deposit in left orbit, extending to left infra temporal region. A treatment of palliative chemotherapy was started with doxorubicin and ifosfamide, after which he was referred for radiotherapy. At that time he had loss of vision, pain and exopthalamus, and palliative radiotherapy was delivered to the left orbit with the prescribed dose of30 Gy/300cGy×10 fraction. Thereafter his case will be followed up at the oncology OPD after a 03 month interval.
Keywords: Chondrosarcoma, Infra temporal, Metastases, Toe.

Sarcomas are rare mesenchymal neoplasms which comprise less than 1% of all types of cancer and arise in muscles, endothelium, cartilage and connective tissues. The incidence of malignant sarcomas is low: 1.5 per 100,000 populations. This incidence relates to approximately 8,000 new cases per year in the United States.1 Sarcomas generally have mesodermal origin, although some are derived from the neuroectoderm, and they are divided into two groups: bone and soft-tissue sarcomas. It should be noted that approximately 3% of bone tumours occur in the foot or ankle. 2,3 Chondrosarcomas (CHS) are tumours that develop during adulthood and old age, with maximum number of incidences between the fourth and sixth decades of life. They account for approximately 20-25% of bone sarcomas. They preferentially affect the flat bones, especially the scapular and pelvic girdles, but may also affect the diaphyseal parts of the long bones. 2,3Chondrosarcomas are the second most frequent primary malignant tumours of the bone and represent one fourth of all primary bone sarcomas. They are characterised by differentiation of cartilage cells and associated matrix, and are a heterogeneous group of lesions with diverse morphological features and clinical behaviour. 4 The behavior of these lesions ranges from the slowly growing late-metastasising tumours to very aggressive early metastasising sarcomas. Many local recurrences occur in soft-tissue tumours because of the particular anatomy of the foot. 5 The metastatic potential of chondrosarcoma tends to correlate to a large extent to the histological grade of the disease. The most frequent sites of metastases are the lungs, regional lymph nodes and liver. 4 Moreover, the orbital region is not a very common site for primary chondrosarcoma to occur. Distant metastases account for 10% of grade 2 and 71% of grade 3 chondrosarcoma, and can occur in the lung, humerus, femur, sternum, liver, pleura and ureter. 6  Survival in patients with metastases is significantly reduced with a five year survival rate of only 18%.6 We report a rare case of chondrosarcoma of the right big toe following surgical resection for the primary tumour, with mets to left orbit extending to left infra temporal region. Patient presented with exopthalamus, loss of vision and a painful left eye.

A 56 year old man had history of trauma of the right big toe which was amputated after the biopsy in 2011 at the SIUT showed chondrosarcoma having clear margins. Following which he had no complaints. After a while, during his routine work an incident became the cause of another injury to his amputated side. In March 2014 a biopsy was done which showed resected margins at 0.3 cm away from soft tissue and 1.4 cm away from bone resection. Radiologist and orthopaedic consultations advised an extended amputation of about 2cm further. In August 2014 a further excision was done for the third time. After that a CT scan of chest was performed for the evaluation of metastasis. The CT scan came back negative for pulmonary mets. In September 2014, the patient's histopathological report confirmed chondrosarcoma, grade 3 (Figure-1). 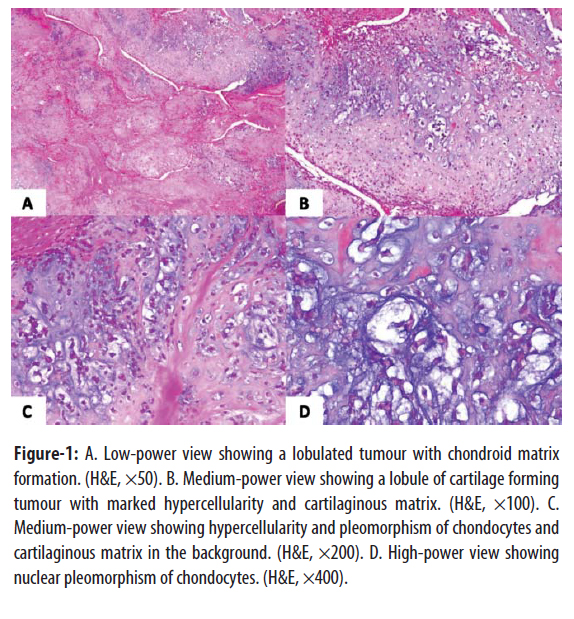 In January 2016, the patient was presented with swelling of the right foot for which an MRI was done. The MRI revealed an ill-defined heterogeneous mass seen on the dorsum of the foot, extensively involving the skin and soft tissues with extension on the plantar surface. In the same month incisional biopsy was done which reported the right foot lesion features that of chondrosarcoma and a section of the bone was also occupied by the tumour. Surgical margins could not be commented upon due to fragmented nature of the specimen. A following orthopaedic consultation in February 2016 advised a further amputation, and evaluation of the role of chemotherapy or radiotherapy.  Eventually the patient presented with left eye swelling, pain and gradual loss of vision of this eye. The oncology team advised a CT scan of his chest, brain and orbit which showed pulmonary and pleural based nodule, with mediastinal and hilar lymphadenopathy representing metastatic deposit in the left orbit extending to left infra temporal region. A treatment of palliative chemotherapy was started with doxorubicin and ifosfamide. The first cycle of chemo was done in February 2016. Beside this, two injections of GCSF were administered respectively. A second cycle of chemo was done in March 2016 and on completion, his treatment was switched to a single agent, GEMETICIBIN, proceeded with weekly doxorubicin in April 2016. Following this he was referred for radiotherapy of the left orbit at which time he had loss of vision, pain and exopthalamus (Figure-2). 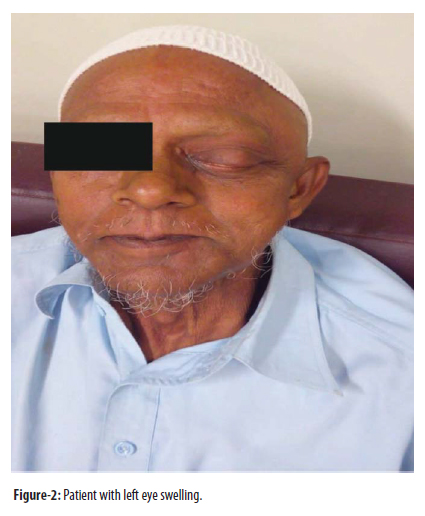 Ct simulation was done for the radiotherapy treatment and palliative radiotherapy was delivered in May-June 2016 to the left orbit with the  prescribed dose of30 Gy/300cGy×10 fractions to left eye(Figure-3). 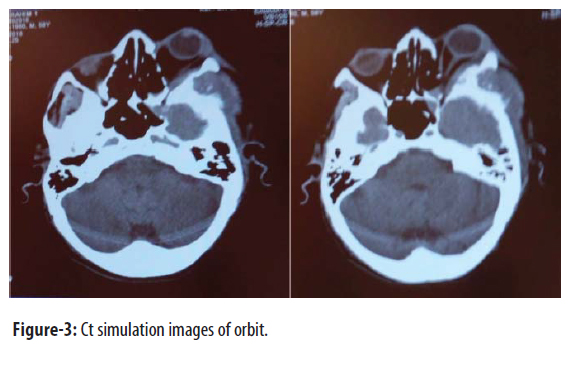 After completion of radiotherapy the patient will be followed up at the oncology OPD after a03 month interval.

Chondrosarcoma may be classified as two types: differentiated (conventional) and mesenchymal. Both are capable of arising as primary tumours in bones and soft tissues. 7 Phalangeal CHS are rare neoplasms and little is known about the biologic behaviour of chondrosarcoma of the phalangeal bones. Benign chondroid neoplasms like enchondroma and osteochondromas are common bone tumours affecting hands and feet. As many as 54% of the bone tumours of hands are cartilaginous, < 2% of which are malignant. When a tumour occurs in feet, involvement of toes and especially distal phalanx is extremely rare. 8 Koak et al study has reported a few cases of the chondrosarcoma of the toes. And a solitary enchondroma or residual cartilaginous fracture callus following traumaof many years which eventually underwent a malignant transformation that appeared to give rise to the chondrosarcoma. 9 Kinoshita et al reviewed 83 cases of bone and soft tissue tumours of the foot. They found 33 benign tumours, one primary CHS and 2 metastatic bone tumours. 10 Our case report is contrary in which orbital and infratemporal metastases occured with primary tumour of right big toe. Patil et al studied 12 CHS of the bones of the feet, of which 4 tumours affected the tarsal bones and the rest involved the short tubular bones. 11 Ogose et al reviewed 163 CHS located in the phalangeal, (meta) carpal, and (meta) tarsal bones of the hands (n=88) and feet (n=75) and suggested that these tumours have the potential to be fatal. CHS of the calcaneus and the talus were more likely to metastasise. 12 Phalangeal CHS occurs far more frequently in the hand compared with the foot, and majority of the cases are located in the proximal phalanx. 13 To the best for our knowledge no case of primary chondrosarcoma of toe with grade 3 unclear features, with orbital and infratemporal metastases has been reported as yet.