This communication focuses on an important, yet neglected, aspect of medicine, which has an impact on diabetes care as well. Betel quid (paan) chewing is a commonly encountered, socioculturally accepted, "culture-bound" addictive disorder. Betel quid chewing has unwanted psychotropic, carcinogenic and dysmetabolic effects. Thus, it should be discouraged as strongly as tobacco use. This communication calls for raised awareness among physicians and community leaders regarding this addictive disorder, and highlight the need for research on this topic.
Keywords: Drug addiction, drug dependence, metabolic syndrome, South Asia.

Betel quid is the fourth most commonly used psychoactive substance in the world, after caffeine, nicotine and alcohol.1 Betel quid known in many parts of the South Asia as \\\'paan\\\', is an integral part of South Asian culture and cuisine. It is available in different forms, such as \\\'saada, (simple),\\\' meetha\\\' (sweet), \\\'palangtor\\\' (aphrodisiac), and processed (tobacco- free: pan masala; tobacco-rich: gutka).

Though its use is socioculturally accepted, betel quid chewing is an addictive behaviour.2 Betel quid chewing can foster addiction or dependence similar to that of cigarettes. This addiction is independent of, and not based on, the tobacco content of betel quid.3 Areca nut, the main constituent of betel quid, along with betel leaves, slaked lime and tobacco, contains aromatic alkaloids such as arecoline, arecaidine, guvacine and guvacoline. These compounds bind to GABA receptors, and create a feeling of alertness and wellbeing.2

Betel quid use is associated with various precancerous and cancerous lesions, including those of oral cavity, pharynx, esophagus, liver, biliary tract and uterus. This association, too, is independent of the tobacco content in betel quid.4 Betel quid is listed as a group I carcinogen by the international Agency for Research on Cancer.5 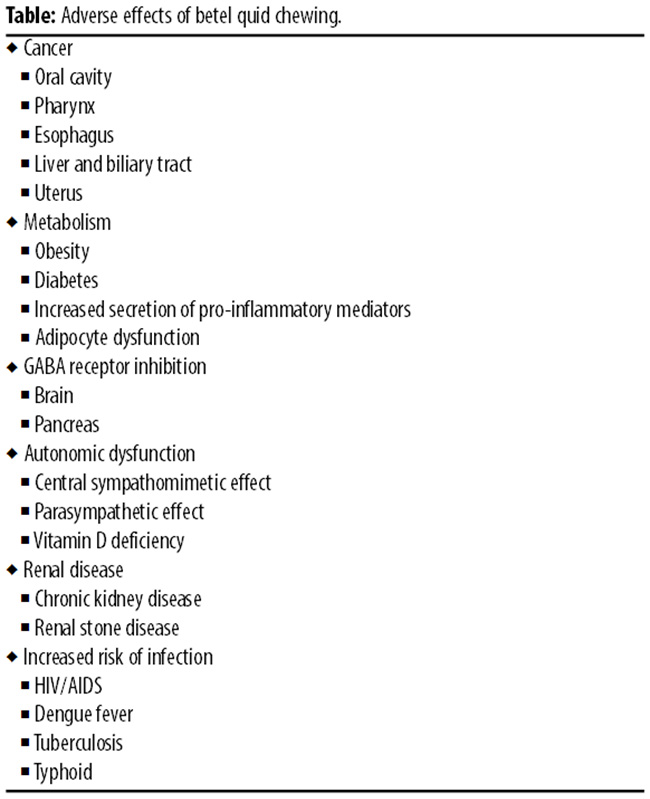 Animal studies have revealed diabetogenic and obesogenic effects of betel nut.6 Past betel quid chewing is associated with new onset diabetes,7 while betel nut consumption has been shown to be associated with increased waist size (in men and women) and increased glucose levels (in women).8
A Bangladeshi cohort study, conducted over 10 years, has reported a greater risk of all-cause mortality and cancer related morality in betel quid chewers. A dose - response relationship of duration and intensity of betel quid use was noted with all-cause mortality. However, no increase in cardiovascular disease was noted in betel quid chewers.9
In contrast, a meta analysis of 17 Asian studies, involving 5 cohorts and 12 case control studies, has demonstrated increased risk of obesity, metabolic syndrome, diabetes and cardiovascular disease in betel quid chewers.10

Apart from its psychoactive, tumorigenic, and dysmetabolic effects, betel quid use impacts health in other ways as well. Betel quid use may predispose to urinary stone disease,11 precipitate chronic kidney disease,12 contribute to hypovitaminosis D,13 and increase risk of infectious disease including HIV/AIDS, dengue fever, tuberculosis and typhoid.14 Use during antenatal period has been shown to worsen pregnancy and neonatal outcomes.

Betel quid addiction can be measured by the Betel Quid Dependence Scale, which has been developed in Taiwan16 and tested in Guam.17 This scale includes three domains: physical and psychological urgent need (7 items), increasing dose (5 items) and maladaptive use (4 items). Dependence is noted to increase with increasing duration and frequency of use, and is greater in less-educated persons.