A 52 years old man presented for the first time in our endocrine clinic in March 2015, with complaints of constipation and swelling of the feet for 3 months. He was diagnosed to have primary hypothyroidism 3 months back during evaluation and treatment for glaucoma. In his past history he had Idiopathic transverse myelitis in January 2014, for which he was treated with steroids for 4 months in tapering regime. He did not report any history of arthritis, however he had impaired fasting glucose and was on dietary and lifestyle modification. The patient had never smoked. He was on levothyroxine 100 microgram daily. He also had a family history of hypothyroidism in his daughter. On examination, he was vitally stable, with insignificant findings on general physical and systemic examination. Laboratory investigations showed a thyroid stimulating hormone level (TSH) of 7.5 uIU/ml (NR: 0.4-4) and free T 4 (FT4) level of 1.24 ng/dl (NR: 0.89-1.76). His dose of levothyroxine was adjusted and he was asked to follow up with thyroid antibodies. On next visit, three months later, he was clinically euthyroid. Laboratory investigations showed TSH level of 1.41 uIU/ml, FT4 level was 1.11ng/dl and his anti-thyroid peroxidase (anti-TPO) was 958 IU/ml (NR: <35) and anti-thyroglobulin (anti-TG) was 60.3 IU/ml (NR: <40). He then presented again after 4 months, this time he was referred by an ophthalmologist to exclude Grave\\\'s eye disease, where he had presented with chief complaints of bilateral prominent eyes. On examination there was bilateral exophthalmos and proptosis with marked chemosis, but without any diplopia (Box-1).

On neck examination, there was no goiter or bruit. He had no tremors and there was no pretibial myxedema. He was advised to get MRI of the orbits to assess the cause of exophthalmos. MRI of the orbits showed enlargement of extraocular muscles, particularly the medial and inferior rectus muscles which are typical findings of Grave\\\'s ophthalmopathy. There was no space occupying lesion identified on MRI as the cause of exophthalmos. He was started on tapering regime of prednisone 40mg per OS daily for 2 weeks, then 20mg daily for 2 weeks, then 10mg daily for 1 week and finally 5mg daily for 1 week, along with Omeprazole 40 mg per OS daily. On follow up he had recovered well with resolution of chemosis and normal vision. Informed consent was taken from the patient\\\'s son for reporting this rare presentation.

Ophthalmopathy associated with primary hypothyroidism is a rare phenomenon, occurring in 7.5% of patients with known primary hypothyroidism as reported in one of the clinical study from Iran.4 It was first reported by Wyse et al in 1968.5 Since then many case reports and some clinical studies from different parts of the world are being reported and epidemiological data shows that it is still an unusual entity in patients with known hypothyroidism. Several studies have shown that there are demographic differences with Asians having less severe manifestation and Caucasians being at higher risk.1
The underlying pathogenesis, though not very clear, is same as in patients with hyperthyroid Grave\\\'s ophthalmopathy. The natural history comprises of an initial dynamic active progressive phase characterized by marked inflammatory infiltrate with lymphocytes in the orbital tissues involving extraocular muscles and fat, followed by a static phase in which inflammation subsides and fibroblasts come into play resulting in fibrosis which may cause permanent disfigurement of the eyes and diplopia.6 How does this pathophysiology correlates with thyroid hormone status in individuals is not clearly evident. Presence of high titers of TSH receptor antibodies in patients with Grave\\\'s hyperthyroidism have shown to explain the autoimmune basis for ophthalmopathy, due to the presence of TSH receptors in orbital fibroblasts, but these antibodies are not found to be elevated in patients with hypothyroidism.2,7
Patients with Grave\\\'s disease can undergo a phase of hypothyroidism in the natural history of their disease process, but our patient had never been diagnosed with hyperthyroidism in the past, nor was there any history of radioactive iodine ablation. Moreover, we could neither label nor exclude this patient to have Grave\\\'s eye disease as we did not have thyroid stimulating immunoglobulins/receptor antibodies (TSI/TRAb) assay available in our facility to confirm the diagnosis. The anti-TPO and anti-TG antibodies done in this patient, could in fact, favour the diagnosis of Hashimoto\\\'s thyroiditis. Hashimoto\\\'s thyroiditis usually comprises of an initial thyrotoxic phase followed by a transient hypothyroidphase with only around 5% patients developing permanent hypothyroidism. However, our patient does not describe any stigmata of hyperthyroidism even in the past to account for the Hashitoxicosis phase of Hashimoto\\\'s thyroiditis.
Patients with Hashimoto\\\'s thyroiditis usually test negative for TSH receptor antibodies but still have typical Grave\\\'s eye disease, elucidating the presence of other eye muscle antigens as the cause of autoimmune basis for the disease process.8 Our patient did have typical findings of Grave\\\'s ophthalmopathy on imaging9,10 (Figure-1). 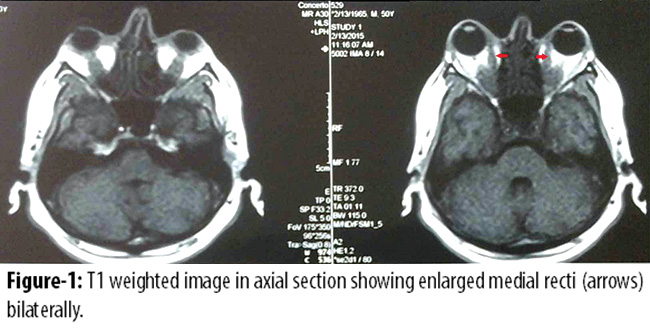 The American Thyroid Association has proposed a more objective method for determining the eye changes of Graves\\\' disease and overall assessment of severity through a scoring system, where Clinical Activity Score (CAS) of > 3 is considered to have active inflammation.11,12 This results in more reliable assessment of ophthalmopathy and requiring orbital imaging early in the course of disease, hence starting early treatment.13 Thyroid associated ophthalmopathy is also classified clinically with the well-remembered Werner\\\' NOSPECS classification corresponding Class 0 to VI14 (Table-1). 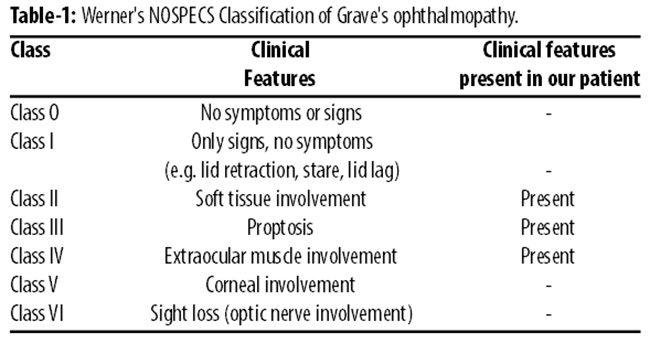 The clinical activity score of our patient was 3, as there was marked chemosis, redness of the eyes and swelling of eyelids.
Treatment of Grave\\\'s ophthalmopathy associated with hypothyroidism is not well defined in the literature. However, it is aimed at immunomodulation similar to ophthalmopathy in Grave\\\'s disease. Patients with hypothyroid ophthalmopathy can continue on thyroid replacement with levothyroxine with simultaneous treatment of Grave\\\'s ophthalmopathy.15 Glucocorticoids in high dose remain the mainstay of initial therapy with prolonged tapering regimes and often requiring longer duration of maintenance therapy before completely withdrawing. The choice of route for steroid treatment has been studied in four clinical trials so far and the response to intravenous route is 77% versus 51% in one of them.16-19 Orbital radiotherapy has been thought to be most effective in reducing inflammation with little or no change in proptosis or muscle function, with an overall 60% response rate.20 Orbital decompression surgeries are usually performed when there is sight threatening optic nerve compression or a need of cosmetic correction for strabismus and diplopia. Newer immunomodulating agents like rituximab and etanercept are underway and several randomized trials are required to bring more novel treatment options for improving the quality of life of patients with thyroid associated ophthalmopathy.7

In conclusion, ophthalmopathy associated with hypothyroidism is very rare and never been reported from Pakistan. Our patient had typical findings of Graves ophthalmopathy supported by clinical and imaging criteria. We did not have the facility of TSH receptor antibodies level to support the underlying Grave\\\'s autoimmune phenomenon and our patient was diagnosed as primary hypothyroidism in first place. However, the classic presentation of Grave\\\'s ophthalmopathy should prompt evaluation regardless of thyroid status, as timely treatment is important to save blindness and morbidity.
Disclaimer: The abstract has been published in the Abstract Book of Pakistan Endocrine Society Annual Conference held on 18-20th December 2015.
Conflict of Interest: None.
Funding Sources: None.

Hydrogen sulfide gas poisoning in fish garbage room: A report of a fisherman