The purpose of this study was to measure the clinical outcomes for patients with stroke after gait training with body weight support (BWS) and with no body weight support (no-BWS).Experimental group was trained to walk by a BWS system with overhead harness (BWS group), and Control group was trained with full weight bearing walk on their lower extremities. Treatment session comprised of six weeks training. Treatment outcomes were assessed on the basis of Timed 10 Meter Walk Test, Timed Get Up and Go Test and Dynamic Gait Index. There was a significant (P<0.05) difference in BWS and NBWS for Dynamic Gait Index, Timed Get Up and Go Test, Timed 10 Meter Walk Test (Self-Selected Velocity), and Timed 10 Meter Walk Test (Fast-Velocity). Training of gait in stroke patients while a percentage of their body weight supported by a harness, resulted in better walking abilities than the Training of gait while full weight was placed on patient\\\'s lower extremities.
Keywords: Body Weight Support System, Gait Index, Gait Training, Stroke Rehabilitation.

"Stroke or brain attack is the sudden loss of neurological function caused by an interruption of the blood flow to the brain".1 Stroke leads to impairment in mobility resulting in problem of static and dynamic balance which in turn effects gait. The loss of control during gait could lead to increased risk of fall after stroke. The disability in stroke patients creates the loss of self confidence and de motivation during any activity participation. This impairment could directly affect the quality of life of stroke patients.2,3 There are different treatment approaches used to enhance the gait mobility and walking performance i.e. PNF, Gait training with orthotic devices. The proper task specific rehabilitation not only improves the functional status of a person rather it enhances the quality of life and their active role in community. In routine rehabilitation main focus is always on strength but the main component of postural stability is always lacking in stroke.4 Heuninckx S5 discussed the three different intervention strategies for fall prevention and quality of life improvement. They also observed the difference in functional status, gait, activities of daily living, fear of falling and depression.5 Langhorne P et al proposed a coordination exercise, gait training and treadmill supported training with electrical stimulation for imprint and enhancing the balance confidence and functional level of stroke patients.6
The literature shows many studies on the balance and gait training in stroke, but the functional mobility is always a major challenge in rehabilitation of stroke patients. There are different rehabilitation approaches used in gait training of stroke, over-ground gait training, body weight support treadmill training (BWSTT), and strength training. A BWS system avoids the risk of falls, by supporting the body weight on lower limbs. It also helps in improvement of balance by increasing trunk stabilization.4 So the purpose of this study was to help the stroke patients in their early and safe gait training by using the body weight support.

A randomized control study was conducted at the Armed Forces Institute of Rehabilitation Medicine (AFIRM) Rawalpindi, from August 2014 to January 2015. Study protocol was approved by the research ethical committee, Riphah International University Islamabad. A total of 50 patients were included with (Anterior Cerebral Artery Syndrome and Middle Cerebral Artery Syndrome) stroke. Patients were randomized into no BWS (Control) group (n=25) and BWSTT (Experimental) Group (n=25) using coin toss method of randomization for initial patient followed by Systemic random assignment technique.
Diagnosed cases of anterior and middle cerebral artery syndrome, and patients with age less than 60 years were included in this study. It was made sure that subjects who suffered 1st ever stroke and having history of no more than a year were included in the study. All patients having Psychological, Cognitive Dysfunction, and any other neuromuscular problem that could interfere with the mobility of the patient, were excluded from the study.
Body weight support System ((SpinoFLEX Model: PXD350C SNO: B05301) consisted of a harness pelvic belt that wrapped around the patient\\\'s hip along with two thigh straps. The harness vertically supported the patients over the treadmill. The patients were supported only for toe touch walking pattern on treadmill. But in no body weight support system the patients were supported with harness just to avoid falling. There was full weight bearing on the legs.
Both Interventional and control group were treated four times per week for six weeks. Each session consisted of 15 minutes\\\' walk on treadmill. All sessions were conducted under the supervision of Physical Therapist to assist in proper gait pattern. Therapist also manually monitored the patient for any abnormal heart rate and respiratory rate during treadmill walking.
Treatment outcomes were assessed on the basis of Timed 10 Meter Walk Test, Timed Get Up and Go Test and Dynamic Gait Index. Assistive devices such as Elbow Crutches and Tetrapod Cane were used during assessment. Data was analyzed by using SPSS 20. To compare the effect of treatment between two groups Mann Whitney U test was applied.
The Mean age of Experimental group was (51.24±6.78 years) and of the Control group was (50.96±7.02 years). There was a significant (p<0.001) improvement in gait, Time Up and Go and Timed 10 Meter Walk test (Self-selected velocity/ Fast Velocity) of the experimental group as compared to control group (Table). 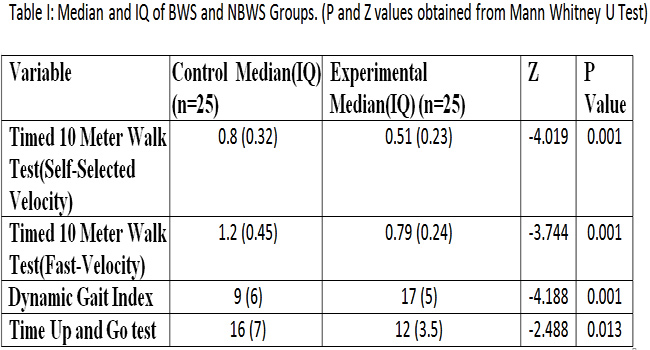 Patients with BWS showed significant improvement as compared to Non BWS. In a clinical research conducted by Bonan at all, one group was treated through BWS programme and the other was treated through without BWS programme. There was a significant difference in patient gait and balance after gait training programme.7
Zanetti and Sehieppati conducted a review and concluded that nine adults who performed treadmill exercises with a visual block improved their concentration on prepriocerptive and vestilubar sense. Their balance ability was improved much more when compared to a vislon allowed group.8 But Nilsson conducted a clinical research on gait training using a treadmill with BWS and conventional treatment; and concluded that there was no significant difference between conventional gait training and BWS.9
Miccain in his recent research assessed the possibility of gait training with treadmill and BWS before over ground training. He concluded that there was a difference between conventional gait training and with BWS gait training. The most interesting feature of this study was use of kinematic analysis for gait evaluation.10
Visintne et al in his study observed better functional balance. He concluded that partially unloading the lower extremities during gait training and progressively increasing the load makes the gait pattern better and enhances locomotion.11
So the present conducted research suggested that improvements in gait achieved during supported locomotion can be continued and trains to full weight body over ground walking after a training procedure. Ultimately this will be more useful with better balance and gait over ground walking speed. One of the major advantages of the use of BWS, is to provide the task specific gait training during early days of rehabilitation as needed by the patients. This can recompense for their inability to presume an upright position while stepping forward.
Disclaimer: None.
Conflict of Interest: None.
Funding Sources: None.