Objective: To assess the effectiveness of existing breast cancer awareness strategies in terms of early breast cancer detection.
Methods: This descriptive, retrospective study was conducted at the Breast Surgery department of the Liaquat National Hospital, Karachi, and comprised records of all biopsy-proven stage 1 breast cancer patients from 1994 to 2014.All relevant records were retrieved year-wise from computerised database and age and stage of each case at presentation were noted. Data of stage 1 breast cancer patients was calculated in all age groups in absolute numbers and in percentage. The total number of women aged below 40 years and stage 1 patients in each year were counted and percentages were calculated and year-wise plotted and compared with whole group.
Results: A total of 8,291 patients were registered during the study period. Their number increased from 53(0.64%) in 1994 to 847(10.21%) in 2014. Over the study period, there was a slow trend towards improvement in early diagnosis of breast cancer.
Conclusion: With existing breast cancer awareness strategies, the rate of change for early diagnosis of this deadly disease was very slow.
Keywords: Breast cancer, Awareness, Early diagnosis, Stage 1. (JPMA 67: 1070; 2017)

Breast cancer is the most common cancer in women and accounts for almost one-third of all women cancers.1,2 In Pakistan, breast cancer has been reported to be the highest in Asia, with an age-standardised incidence rate (ASR)of 51.7,3 and the incidence of breast cancer is on the rise similar to the Western population.3 We still see women being diagnosed at an advanced stage. There have been various reasons pointed out for delay in presentation of breast cancer in the developing world. There is strong evidence that lack of education and low income contribute significantly along with various other factors.4
We know that breast cancer prevention is an early diagnosis. When disease is detected early, patient can almost be cured without mutilating surgery like mastectomy, leaving women with less psychological morbidity.5 Breast cancer awareness to diagnose women at an early stage has been a challenge for our society. Main reasons are our psycho-social beliefs, and economic constraints as only less than 1% of gross domestic product (GDP) is spent on health.
However, we have come a long way as 20 years ago it was culturally considered a taboo to talk about breast, as it was equated with sexuality rather than health. Now print and electronic media is talking about it quite openly. Is this awareness translating into diagnosis at an early stage, which is what every health care provider would like to see, with a hope for better outcome?
We do not have national or provincial tumour registry and we still have to rely on hospital-based data despite its limitations. Karachi, being the cosmopolitan city of Pakistan, has representation of all provinces and people from all ethnic backgrounds. Therefore, the figures to an extent can be extrapolated to the whole country. The breast clinic at our institute, being one of the largest breast clinics, seemed to be the best place to conduct this study. The current study was planned to assess how effective existing breast cancer awareness strategies were in terms of early detection of breast cancer by identifying the overall percentage change in stage 1 breast cancer patients and comparing it with younger women (aged below 35 years).

This descriptive, retrospective study was conducted atthe breast surgery department of the Liaquat National Hospital, Karachi, and comprised records of all biopsy-proven stage 1 breast cancer patients from 1994 to 2014. The breast clinic was established in 1994 in our hospital. From the beginning all patients\\\' data has been saved manually and electronically in purpose-built software. Data was retrieved year-wise and their patients\\\' age and stage of breast cancer were noted.
Patients of all age groups were included and data was calculated in absolute numbers and in percentage.
The total number of women aged below 40 years in each year was counted along with stage 1 patients in this group, and percentages were calculated and year-wise plotted and compared with the whole group.
All patients with confirmed tissue diagnosis of breast cancer were included in this study. Patients without the biopsy report were excluded. 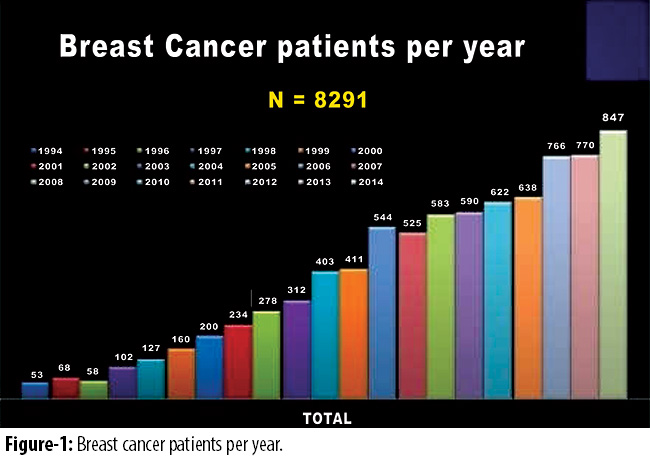 Collectively, the number of patients diagnosed with stage 1 cancer was 315(3.8%).
Year-wise data showed that there was an upward increasing trend and the given time series was non-stationary. Further, it was seen that the pattern was variable. It increased in 1995 and then moved towards zero in 1996 and then slightly increased from 1997 to 1998 and then decreased in 1999. The similar pattern with slight variation was observed in the percentage of stage 1 cancer patients from 2004 to 2007 and then it increased in 2009. The number showed minor changes in 2010 to 2012 and then increased in 2013 and 2014 (Figure-2). 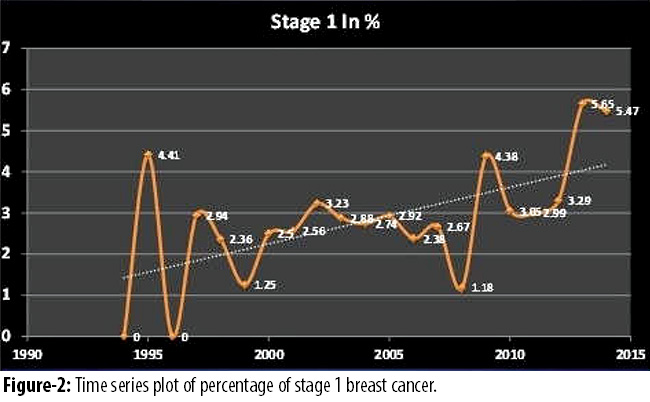 A comparison of overall stage 1 patients with those aged 40 years or below showed that there were ups and downs in the percentages in due course of time. Though there was an upward trend overall, the percentage of stage 1 breast cancer patients in this age group was comparatively much less all along (Figure-3). 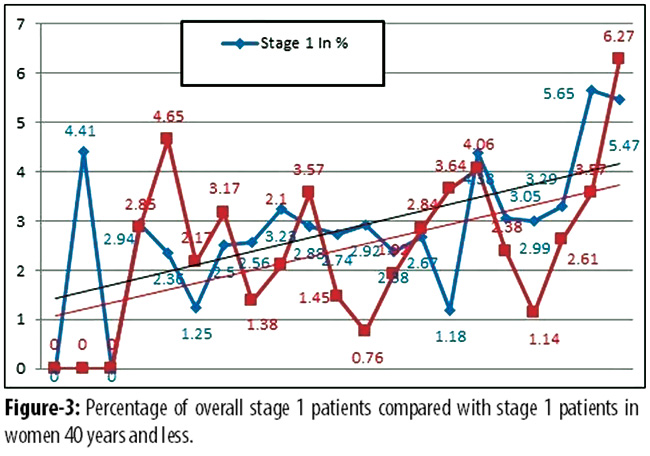 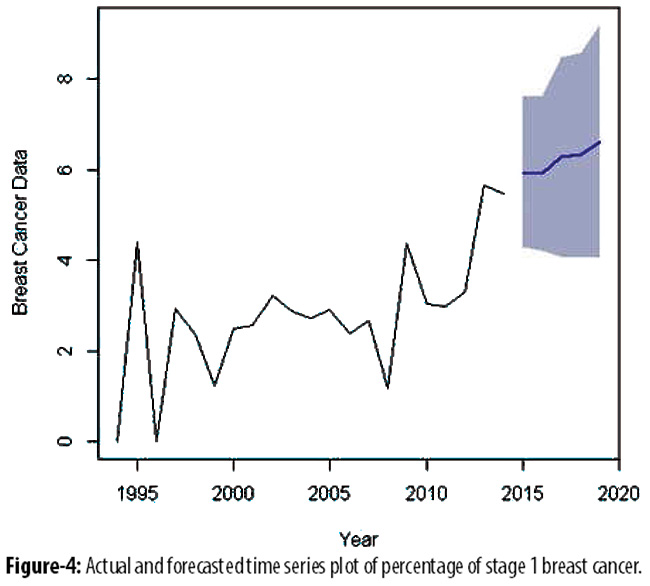 Breast cancer is the commonest cancer in women worldwide, including Pakistan. Pakistan has been reported to have the highest incidence of breast cancer in Asia.
We know that the earlier we diagnose this disease there will be more chances of breast conservation and disease control, and women can be cured and survival improved.
In the absence of a national tumour registry, we are left with no choice but relying upon individual studies or hospital-based tumour data. In our study the maximum number of patients were diagnosed in the fourth decade of life and almost 30% of our patients were diagnosed at a young age less than 40 years and 7% less than 30 years of age.
We do not have adequate facilities/ resources for national breast cancer screening, including mammograms to diagnose breast cancer at earliest possible stage. However, to increase awareness we have started to talk about breast cancer in print and electronic media, and various breast cancer awareness programmes are being organised at a number of schools and colleges, organisations and hospitals for medical and non-medical persons.
We have never tried seriously to estimate the burden of disease and impact of awareness or screening measures we are taking. Are these measures enough to address this deadly disease? When we look at the data of patients diagnosed with stage 1 breast cancer, we realise that there has been a marked variation in this duration of last 21 years although there is overall upward trend towards improvement, which is more marked in the last couple of years. When we compare the percentage of stage 1 breast cancer patients to stage 1 younger women aged less than 40 years we see that the numbers are much smaller with variations, although this also shows slight upward trend. This emphasises the need to pay attention to younger women, too, for early diagnosis. On the same trend when we plot it to forecast the percentage of stage 1 patients, we realise that we will be diagnosing only up to 9.19% of patients in stage 1 by year 2019, which is not enough to address this deadly disease. Other studies from Pakistan have shown the same results.6,7
In the West, including the United Kingdom (UK) and the United States (US), where there is more education, awareness and national screening programmes, the majority of breast cancer cases are diagnosed at an early stage and so they have better disease control and increased prevalence of disease.8-10
Various reasons reported for delay in diagnosis are lack of awareness, contributed by lack of education,11 economic pressures, fear, and lack of adequate cancer care facilities. Another major reason is free unchecked availability of alternative unconventional practitioners, whereby distressed, especially uneducated, patients waste a lot of their time relying upon them.12
We need to pay attention to early diagnosis and management of breast cancer in our population, where the incidence is high and diagnosis at an advanced stage. One of the possible ways could be to increase literacy rate and include health education in our school and college curricula. This methodology has proved to have positive impact in our society.13
Another way is to educate all health care workers in early diagnosis of breast cancer and timely referral to appropriate hospitals. Moreover, there should be a system of check and balance on unconventional healers as they misguide patients and a lot of precious time is wasted in it. There is also a need to recognise the problem and consider breast as a sub-specialty at post-graduation level for better training and improved patient care, with the hope of better patient outcome.
There is significant delay in diagnosis of breast cancer and still women are diagnosed at an advanced stage. We need to increase awareness at a faster pace and come up with acute measures for mass screening along with adequate resources to manage the newly diagnosed breast cancer patients. Diagnostic and therapeutic facilities at district level should also be increased.
Looking at our age distribution figures, we should consider starting screening at a relatively younger age, at least a decade earlier than the West.
This is a state of health emergency and acute measures need to be taken for early diagnosis of breast cancer.

With existing breast cancer awareness strategies, the rate of change for early detection of this deadly disease is very slow. Effective and acute measures are needed at local and national levels to bring about the desired change in younger and older women.