This cross-sectional study was conducted at Hafsa Sultan Hospital of Celal Bayar University (CBU), Manisa, Turkey, from September to November 2014, and comprised inpatients. The cross-sectional survey design was used to evaluate affecting factors and the relationship between patients\\\' attitudes towards the nursing profession and perceptions of nursing care.
Patients who were aged 18 years above, hospitalised for two or more weeks, Turkish-speaking, , having no psychiatric history, having a self-reported absence of severe pain, willing to volunteer to complete the scales, and who completed the questionnaire after agreeing to give informed consent to be interviewed were included in this study. The participants had been under treatment for three months before the beginning of the study; this was ascertained by the examination of the hospital records. Non-probability sampling method was used. The sample size was calculated as 358 with a 95% confidence level.
A structured questionnaire was administered to patients by using the patient information form about their socio-demographic characteristics and hospitalisation, and two standardised scales: the patient perception of hospital experience with nursing care (PPHEN) and the attitude scale for the nursing profession (ASNP).
The patient information form included a 10-item self-reported form developed by the researchers after a review of the literature.6,10 This form consisted of 10 questions to specify the patients\\\' socio-demographic and hospitalisation characteristics.
The PPHEN scale was developed by Dozier et al.2 in 2001 in New York, and the validation and reliability studies of the scale for Turkish were carried out by Coban and Kasikci in 2006 in Turkey.5 This 15-item instrument, based on Swanson-Kauffman\\\'s framework, is able to detect changes in patients\\\' perceptions of the quality of nursing care when provided in different institutions and when care delivery varies within the same institution of caring. PPHEN has 15 items, a one-factor structure and is a five-point Likert scale Cronbach\\\'s alpha reliability coefficient was 0.92, and item-total item-point correlations were between 0.36 and 0.74. In addition, the test-retest correlation value was 0.90. Participants can score a minimum of 15 and a maximum of 75 points on the scale and the cut-off point is 45. A score of 45 or above shows positive perception of nursing care.5 In this research Cronbach\\\'s alpha was 0.92.
The ASNP scale was developed by Coban and Kasikci in 2010 in Turkey.21 ASNP consists of 40 items across the following three domains: properties of the nursing profession (18 items), preference for the nursing profession (13 items) and general position of the nursing profession (9 items). The ASNP is a five-point Likert scale and items 21, 23, 25, 26, 28, 30, 34 and 38 are reverse scored. Total score of the scale is 40-200. If the total score is high, the positive attitude is also high. Giving three points or above shows a positive attitude towards the nursing profession. The value of the Cronbach\\\'s alpha for the total scale was 0.91. The ASNP has been determined to be highly valid and reliable, and an adequate measuring instrument to determine attitudes towards the profession.21 In this research Cronbach\\\'s alpha for the total scale was 0.828.
Permission to use the PPHEN scale and ASNP in this study was obtained from the Turkish developers5,21 before conducting the study.
After approval from the institutional review board, a registered nurse, one of the researchers, administered the patient information form and the two scales to the hospitalised patients meeting inclusion criteria. Data for the study was collected by her through face-to-face interview in the patients\\\' room.
SPSS 21 was used for data analysis. Descriptive statistics were used to describe patients\\\' socio-demographic characteristics. Independent t-test, one-way analysis of variance (ANOVA) and Pearson\\\'s product-moment correlation were used to assess associations between scores and socio-demographics variables. Multiple linear regression analysis was used to identify the impacts of variables between patients\\\' attitudes towards the nursing profession and perceptions of nursing care. P<0.05 was considered significant. 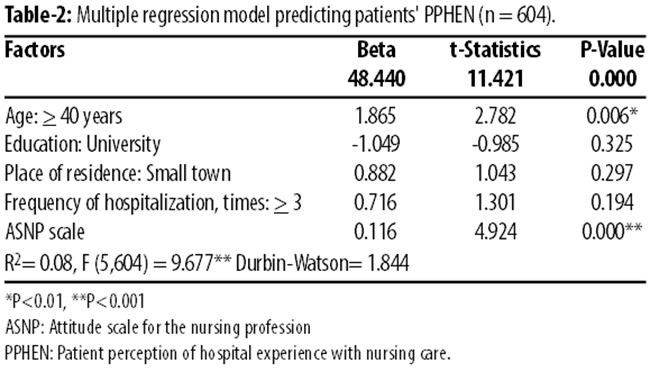 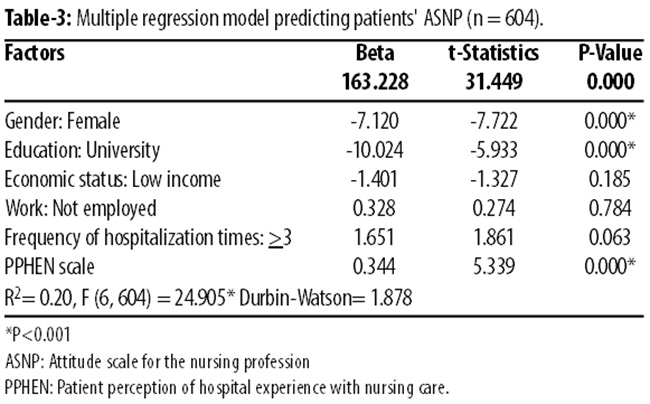 Disclaimer: The study was presented as an oral presentation in Celal Bayar University Graduate School of Health Sciences, International Graduate Education Congress, held from May 12 to 14 2016 in Manisa, Turkey.
Conflict of Interest: None.
Source of Funding: None.