Objective: To determine the frequency of acute bacterial meningitis in children with first episode of febrile seizures.
Methods: This cross-sectional study was conducted at the Polyclinic, Postgraduate Medical Institute, Islamabad, Pakistan, from December 2012 to August 2013, and comprised patients with first episode of fever and seizure. SPSS 10 was used for data analysis.
Results: Of the157 patients, 12(7.6%) were diagnosed to have acute bacterial meningitis with 5(41.6%) in the age group of 6-12 months, 4(33.3%) in 13-18 months and 3(25%) in the age group of 19-60 months.
Conclusion: Clinicians evaluating children after a febrile seizure should direct their attention toward identifying the cause of the child\\\'s fever.
Keywords: Febrile seizure, CSF, Lumbar puncture, Meningitis. (JPMA 67: 1054; 2017)

Febrile seizure is the most commonly occurring childhood benign seizure. It is defined as a seizure that occurs in association with fever in children aged 6 months to 5 years, with no evidence of central nervous system (CNS) infection or other identifiable causes of seizure and no history of an afebrile seizure.1 These seizures are mostly self-limiting with no long-term sequel.2 Febrile seizures are classified as simple and complex. About 65-90% of febrile seizures are simple.3 The incidence of febrile seizures in most parts of the world is 2-5% and about 1-6% of the patients develop epilepsy later in life, especially those with the history of complex febrile seizures.4 If the family history of febrile seizure is present, this incidence increases to four times and 31% in first-degree relatives. This also shows there is some genetic aetiology behind these seizures, but little is known about it.5 Other reasons why fever causes fits are increased electrical activity of heated neuron probably by altering the activity of ion channels; cytokines released during fever, specifically interleukin-1b, enhance the excitability of neurons; and alkalosis induced by hyperventilation during fever also increases neuronal excitability.6 A recent study has shown that the incidence of febrile seizures, especially the complex variety, has increased over the last decade.7 For simple febrile seizure, no treatment is required. But for complex febrile seizure lasting more than 5 minutes, acute abortive therapy should be initiated. Besides, parental counselling is another important aspect of management. There is no role of prophylactic medication; in fact, there is an increased risk of adverse effects in 30% patients.8 No mortality or morbidity is associated with febrile seizure, even with prolonged febrile seizures no motor or cognitive deficit has been reported.9 Febrile seizure is a diagnosis of exclusion. So, it is important to rule out all other causes of seizures. It is mandatory to look for signs of raised intracranial pressure i.e. bulging fontanel, papilloedema and signs of meningeal irritation to exclude meningitis.10 As acute bacterial meningitis (ABM) is a life-threatening medical emergency, delay in onset of treatment may lead to long-term neurodevelopmental sequel. Clinical suspicion is supported by cerebrospinal fluid (CSF) analysis to rule out meningitis.
Studies are carried out worldwide regarding the necessity of lumbar puncture (LP) in children presenting with first episode of fever with fits. The American Academy of Paediatrics (AAP) has provided useful guidelines to rationalise the use of routine LP and neurodiagnostic tools for such children. According to AAP, LP in a child presenting with first simple febrile seizure should be performed in a sick-looking child with clinical sign and symptom of meningitis; in child aged 6-12 months with lack of immunisation, especially haemophilus (H.) influenzae type b(Hib) and streptococcus (S.) pneumoniae, or immunisation status unknown; and in child already treated with antibiotics. Laboratory or radiological investigations and electroencephalogram (EEG) is not required.11 Studies are being conducted internationally to accept or refute the AAP guidelines, but unfortunately limited data is available regarding South Asian children.12
Lumbar puncture is an invasive procedure. On the one hand it is the only diagnostic test for meningitis, but on the other hand, it increases anxiety among parents who are already traumatised witnessing their child having seizures. The current study was planned to assess the necessity of LP in children presenting with their first febrile seizure, and to determine whether AAP guidelines were applicable in our country. Most of the patients who present to the emergency department with fever and fits are diagnosed as febrile seizures; they only need observation, effective management of high-grade fever by simple measures and parental counselling.

This cross-sectional study was carried out at the Paediatrics Emergency Department, Federal Government Polyclinic, Post-graduate Medical Institute, Islamabad, Pakistan, from December 2012 to August 2013, and comprised children with first episode of febrile seizures. Sample size was calculated using World Health Organisation\\\'s (WHO) calculator.13 Confidence interval (CI) was kept at95%, anticipated population proportion7%[2] and absolute precision 4%. Non-probability convenient sampling technique was used. All the patients aged between 6 and60 months presenting with fever >100 degrees Fahrenheit with first episode of febrile seizure, and who arrived at emergency department within 12 hours of febrile seizure were included. Patients with history of peri-natal asphyxia, afebrile seizure, altered mental health or cerebral palsy, history of trauma, recent neurosurgical intervention or presence of shunt or who were on antibiotics for >48 hours were excluded.
Presenting complaints were noted for all patients and they were examined as per standard examination method. After taking informed consent from the parents, lumbar puncture was performed along with a random blood sugar to see how many children presenting with febrile fits have ABM. Cerebrospinal fluid was collected for cell counts with differentials, proteins, glucose and culture and sensitivity (C/S). CSF was analysed as per standard laboratory methods by a pathologist.
ABM was diagnosed in a child presenting with fever and seizure on the basis of CSF pleocytosis (white blood cell (WBC) count >5/ul), proteins more than 40 mg%, glucose < 2/3rd of blood sugar level or CSF C/S showing growth of a microbe.
Children diagnosed to have meningitis were admitted and treated accordingly, whereas children diagnosed to have febrile seizure were managed for fever with oral antipyretics and other medications according to the source of infection.
Permission was taken from the ethical committee before carrying out the study. SPSS 10 was used for data analysis. Mean and standard deviation were presented for quantitative data, such as age and temperature. Frequencies and percentages were presented for categorical data, such as gender and meningitis. 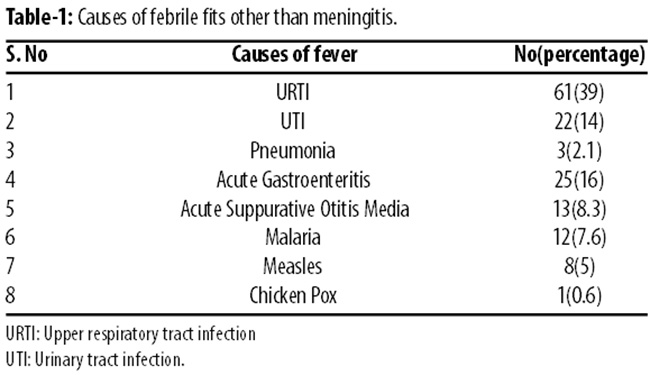 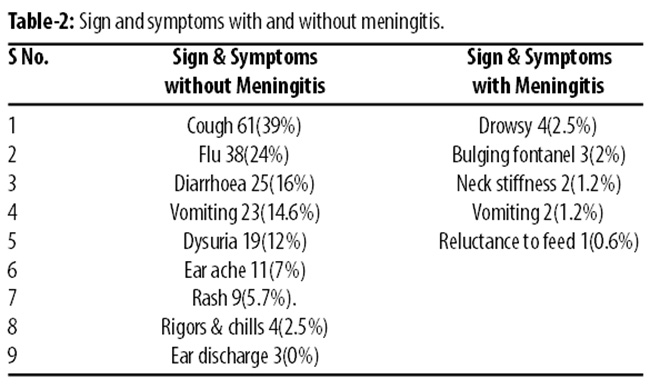 The children who experienced fever with seizures had a mean temperature of 101.69+1.7 degrees Fahrenheit (range: 100-105 degrees).

Clinicians evaluating infants or young children after a simple febrile seizure should direct their attention towards identifying the cause of the child\\\'s fever. LP is an option in children who have been pre-treated with antibiotics.