Visual outcome in patients of keratomycosis, at a tertiary care centre in Larkana, Pakistan

Objective: To study the post-treatment visual outcome of fungal keratitis.
Methods: This prospective study was carried out at Chandka Medical College and Hospital, Larkana, Pakistan, from March 2005 to March 2016. Patients with clinical features of fungal keratitis, with positive corneal scrapings for fungi, and those who followed up for a minimum period of three months after recovery from infection were included.Other causes of infectious keratitis were excluded. The clinical diagnosis of fungal keratitis was based on risk factor identification and characteristic non-specific and specific corneal features. Treatment included antifungal preparations, topical and if necessary systemic, in addition to symptomatic measures. SPSS 20 was used for data analysis.
Results: Of the 1,130 patients, 750(66.37%) were males and 380(33.63%) were females. The overall mean age was 39.44±12.46 years (range:16-74 years). After the completion of treatment, 590(52.21%) of the eyes just retained visual acuity of not more than counting fingers and 126(11.15%) patients lost their globe. Patients with remaining corneal opacity needed keratoplasty.
Conclusion: Most of the eyes just retained visual acuity of counting fingers while some patients lost their globe.
Keywords: Fungal eye infection, Keratitis, Antifungal agents, Natamycin, Fluconazole. (JPMA 67: 1035; 2017)

Cornea is one of the most important parts of the human eye because it contributes the majority of the eye\\\'s refractive power and its transparency is vital to vision.1 Corneal infection is the most common cause of monocular blindness in the world.2 In Pakistan, corneal opacity is the second-most common cause of blindness after cataract.3 Fungal keratitis (keratomycosis) was first reported by Theodor Leber in 1879 in a farmer.4 Since then, fungal keratitis has turned into a big challenge for the ophthalmologists around the world and is now a major cause of infectious keratitis.5-7 Fungi cannot penetrate the intact defence of the eye, they need some kind of breach in the defence mechanism of the eye to develop infection, like, an epithelial defect, excessive steroid use or an immunocompromised patient.8 The most common mode of fungal entry into cornea is direct fungal implantation usually caused by trauma during cultivation or harvesting. Other causes may be contact lens-wear, corneal surface diseases and prior corneal surgery.9 Once they gain access into the cornea, but they are able to proliferate, multiply and cause tissue necrosis with the help of mycotoxins and proteolytic enzymes. Corneal perforation is 5 to 6 times more likely with fungal keratitis than it is with bacterial keratitis, and patients with fungal keratitis are at a greater risk of progressing to endophthalmitis.10 Due to the protracted course of the condition and the diversity of clinical presentations, the outcomes of the fungal keratitis are unfavourable compared to bacterial keratitis.11 The current study was planned to evaluate the post-treatment visual outcome of fungal keratitis and to see its prognosis in patients.

This prospective study was carried out at the department of ophthalmology of Chandka Medical College and Hospital, Larkana, Pakistan, from March 2005 to March 2016, and comprised patients suspected to have fungal keratitis. Approval was obtained from the ethics review committee of Shaheed Mohtarma Benazir Bhutto (SMBB) Medical University, Larkana. The sample size was calculated using World Health Organisation\\\'s (WHO) sample size calculator12 keeping the margin of error at 3% and confidence interval at 96%. Non-probability consecutive sampling was used. Informed consent from all participants was obtained. Patients who had clinical features of fungal keratitis and corneal scrapings, prepared with potassium hydroxide (KOH) 10%, positive for fungi and who completed their follow-up period of minimum three months after recovery from infection were included in the study. Patients with bacterial, viral, Acanthamoeba and exposure keratitis were excluded. The clinical diagnosis of fungal keratitis was based on risk factor analysis (exposure to plant trauma, belonging to farmer community) and characteristic non-specific and specific corneal features. Non-specific features were conjunctival injection, corneal epithelial defect, suppuration, stromal infiltration, anterior chamber reaction and hypopyon. Specific features included fine or coarse granular infiltrate within the epithelium and anterior stroma with feathery margins, elevated edges, rough texture, gray-brown pigmentation (in pigmented filamentary fungus infection) and satellite lesions (Figure). 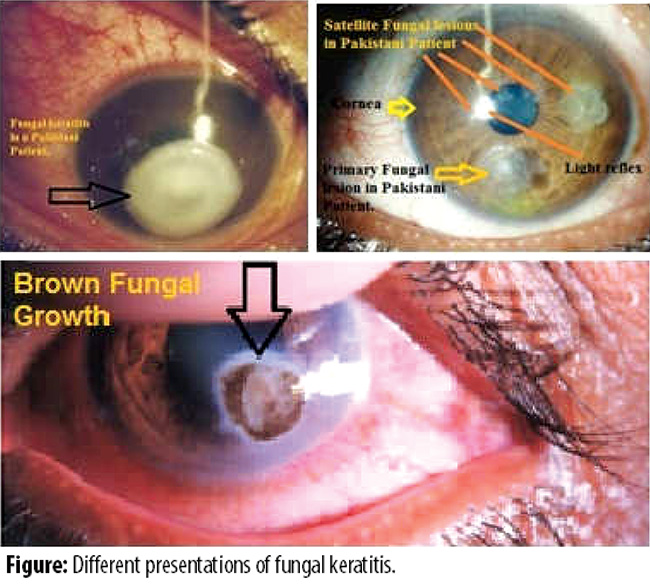 Corneal scrapings were taken and KOH 10% wet mount preparation was used for the diagnosis of fungi. Treatment commenced immediately without further loss of time with antifungal preparations, topical and if necessary systemic, in addition to symptomatic measures. Natamycin 5% eye drops were instilled one hourly and fluconazole 150mg was given orally as a single dose. Fortified tobramycin, fusidic acid, ofloxacin and moxifloxacin eye drops were also used in combined infections, keeping in view the culture and sensitivity reports. Brown growth was removed with a blunt instrument like spud. Age, gender and pre-and post-treatment visual acuity were recorded on a standard proforma. Visual outcome was assessed finally, three months after the completion of medical treatment and recovery from the infection, and any improvement noted. Increase in the post-treatment visual acuity of at least one meter when counting fingers (CF) or one line on the Snellen chart was considered as improvement in visual acuity. SPSS 20 was used for data analysis. Frequency and percentage was calculated for gender, pre-treatment visual acuity and post-treatment visual acuity (improvement or no improvement). Mean and standard deviation was calculated for numerical variables like age. Wilcoxon test was applied. P<0.05 was considered statistically significant.

Delay in treatment ended up in complications including complete corneal necrosis and perforation of the cornea. Corneal opacity remained after treatment which required keratoplasty.

Fungi account for 5-40% of culture-proven infections.13 Fungal keratitis is more prevalent in tropical or subtropical climates and agricultural countries, where ocular trauma is most commonly the triggering factor.14-20 Pakistan is an agricultural country and a majority of the people make their livelihood by this way and are exposed to hazards such as fungi. According to our study, males (66.37%) were affected more than females as identified by Gopinathan U. et al;21 however, cases lost to follow-up were more on the female side. Adults of middle age were more prone to develop fungal keratitis in our study as is clear from the mean age of 39.44±12.46 years, which is similar to other studies from Pakistan.22-24 This may be explained by the fact that this part of the population are at a greater risk to trauma and other corneal diseases leading to fungal infection. The mean age (39.44±12.46 years) recorded in our study was lower as compared to the mean age (64.3±10.3 years) reported by Ahn M. et al.25 Fungal keratitis is considered more difficult to treat than bacterial keratitis and the prognosis is also worse.26 The outcome of this study also suggests similar results as more than half of the patients (52.21%) just retained visual acuity of not more than counting fingers and 11.15% patients lost their globe, particularly in patients who presented late with pre-treatment vision of finger counting to PL+ve. Keratoplasty was needed in many cases where corneal opacity hindered the vision but due to lack of keratoplasty facilities in our hospital patients were referred to other hospitals where keratoplasty facilities were available and hence most of them were lost to follow-up. According to our knowledge, similar studies have been conducted in different parts of Pakistan on a smaller extent, but none has been performed previously in our region and no study has this great magnitude. Therefore, the current study will not only provide knowledge about prevalence of keratomycosis in this part of the world, but will also draw national and international attention to this patient population.
New clinical observations deduced from this study included quicker clinical improvement in patients with pigmented lesions (brown growth) after mechanical removal with spud. Moreover, it was found that patients who received one hourly natamycin eye drops during day and night showed more improvement clinically than those who received one hourly natamycin eye drops only during day time. Fungal keratitis is emerging as an economic and social disaster due to the fact that the exposed population consists of young males and females actively involved in nation building. Public awareness, education and immediate intervention at national level are mandatory to control this serious ocular problem.
One of the limitations of the current study was our inability to perform fungal culture and sensitivity, so we could not identify various species.

Fungal keratitis, due to its high morbidity, is a dangerous ocular problem in agricultural countries like Pakistan, therefore, its early diagnosis, treatment and enforcing preventive measures should be given top priority. Wearing sunglasses should be adopted by the exposed population and health education focusing on preventive strategies, like promoting use of threshing machine instead of manual methods being used by farmers of particularly paddy crop, should be implemented.