Objective: To examine molecular genetics and prenatal diagnosis of beta-thalassaemia.
Methods: The study was conducted at the COMSATS Institute of Information Technology, Sahiwal, Pakistan, from October 2012 to October 2013, and comprised families having children affected by thalassaemia and autosomal recessive b-thalassemia. Blood samples of thalassaemic children and their parents were collected from different areas of Pakistan. They were screened for reported mutations through amplification refractory mutation system-polymerase chain reaction. Once mutation was characterised, chorionicvilus sampling was carried out to provide the retrospective first trimester prenatal diagnosis.
Results: A total of five families were included in this study. Electropherogram showed that both mother and father were heterozygous (carrier) for intervening sequence I-5 mutation whereas the affected child was homozygous for this mutation. Five chorionic villus samples were examined to analyse the molecular defects which were responsible for beta-thalassaemia in the families. Prenatal diagnosis was performed for these families. They had at least one affected child (thalassaemia major) who was transfusion-dependant. Amplification refractory mutation system-polymerase chain reaction was found to be a very sensitive method to find the known point mutations present in beta-globin gene. Point mutations identified included intervening sequence I-5 (G-C), frameshift codon8/9 (+G) and frameshift codon-41/42 (-TTCT).
Conclusion: It is the best preventive action to adopt the screening process to overcome the disease.
Keywords: b-thalassemia, ARMS PCR, b-globin gene. (JPMA 67: 1030; 2017)

The innate disorders of haemoglobin (Hb) are the most frequent monogenic disorders worldwide. Around 7% of inhabitants are carriers with more than 300,000 harshly affected babies born every year.1
Thalassaemia is one of the most common autosomal recessive blood disorders in the world. It shows a diversity of medical appearance, starting from asymptomatic to severe blood transfusion dependence. More than 500 alleles have been distinguished in or around the b-globin region. Furthermore, the incidence of these alleles varies among different ethnic groups, as some alleles are predominantly flowing inside the society in that particular area.2
Various mutations in globin genes cause thalassaemia and are considered pathogenic to cause the disease.3 b-thalassaemia is one of the main prominent single-gene hereditary conditions in the world.4 Approximately 70,000 newborns are reported to be with b-thalassaemia worldwide every year, and 270 million citizens are carriers of haemoglobinopathies.5 b-thalassaemia is commonly found among populations in all Mediterranean countries, as well as in Southeast Asia, India, Africa, Central America and the Middle East.4
No patient registry is accessible in Pakistan, but it is estimated that 5,000-9,000 children with b-thalassaemia are born per year. Almost 9.8 million carriers are estimated in wide-ranging population with a carrier rate of 5-7%.6 In another study, b-thalassaemia carriers were estimated to be 8 million in Pakistan.7 Modell and Darlinson found national carrier occurrence for b-thalassaemia at 4.6% in Pakistan.8 Lack of knowledge leads people towards cousin marriages, which results in increased poverty level, high birth rate, and low educational rank. Early marriages with lack of knowledge has led Pakistan towards very high number of children who are transfusion dependent.9 Few transmission services and cultural leaning of cousin marriages of 40% have led towards high risk of congenital transmission of b-thalassaemia trait.10
Prenatal finding is an essential part of any disease control programme for haemoglobinopathies. Estimation of the disease burden, creating awareness in the people, diagnosis of carriers and couples at risk and genetic counselling are basics for a successful prevention programme. The extraordinary achievement of such programmes in the 1970s in Cyprus, Italy, Greece and the United Kingdom led to the development of control programmes in many other countries.11-14
The World Health Organisation (WHO) has recognised control of haemoglobinopathies, mainly b-thalassaemia, in emerging world, as a main concern.11 An expected 5,000-9,000 children with b-thalassaemia are born per year, though no documentary registry is available in Pakistan. The expected carrier rate is 5-7%, with 9.8 million carriers in the whole inhabitants.10
Population analysis, genetic counselling, prenatal diagnosis and abortion of affected pregnancies and discovering the fundamental molecular defects in b-thalassaemia is a significant requirement for such programmes. In Pakistan, most of the patients live in rural areas but those who live in cities do have entrance to prenatal diagnosis services which are typically run by charitable trusts.12
Mutations which cause b-thalassaemia in Pakistan have been identified. Approximately twenty one13 b-globin alteration were recognised in this country. Among them three-point mutations — intervening sequence (IVS) 1-5, frameshift codon(FSC) — 8/9 and Cd-41/42 — frequently appear in almost 86% of all the molecular defects which cause this disease.14 The diagnosis becomes simpler in majority of the cases because the molecular defects are known.
A major revolution was brought by polymerase chain reaction (PCR) technology that allowed the identification of easier mutation detection, as well as the expansion of pre-implantation genetic diagnosis (PGD) and non-invasive prenatal diagnosis procedures. Nowadays thalassaemias are detected directly by the analysis of amplified deoxyribonucleic acid(DNA) from foetal trophoblast or, more rarely, from amniotic fluid cells.15
Prenatal diagnosis become rapid and more reliable after the introduction of chorionic villus sampling (CVS) along with PCR-based technique, i.e. amplification refractory mutation system-polymerase chain reaction (ARMS-PCR) at early stage of pregnancy.16 However, rare mutations can be characterised for b-thalassaemia by methods like gene sequencing and single-strand conformation polymorphism, which are considered more reliable tools.17 The current study was planned to examine molecular genetics and prenatal diagnosis of beta thalassaemia to control transfusion-dependent births.

The study was conducted at the COMSATS Institute of Information Technology (CIIT), Sahiwal, Pakistan, from October 2012 to October 2013, and comprised families having affected children by thalassaemia and autosomal recessive b-thalassemia. All of them demonstrated autosomal recessive mode of inheritance. Informed consent was obtained from all the parents. Clinical examination of all individuals who agreed to participate in this study was carried out. Peripheral blood of parents and affected/carrier/normal siblings (on the basis of availability) was collected. Then, 3-5mL blood was drawn through 10mL syringes (0.7 × 40 mm, 22G × 11/2) and stored in10mL Vacutainers tubes containing ethylenediaminetetraaceticacid (EDTA) (anticoagulant). Each family had at least one affected child (proband or index child). Five families were analysed for prenatal diagnosis. All of them demonstrated autosomal recessive mode of inheritance. At the time of sampling, some information was collected from the families. It included the parents relation, i.e. whether they were relatives or not, to see the effect of consanguineous marriage on disease frequency, their address to observe which mutation were common in the specific region, affected child, when the first blood transfusion was given and time interval for blood transfusion. Blood from their affected and normal (phenotypically) children was also collected. After analysis, the genotype and phenotype of parent children and foetus were explained one by one (Figure-1). 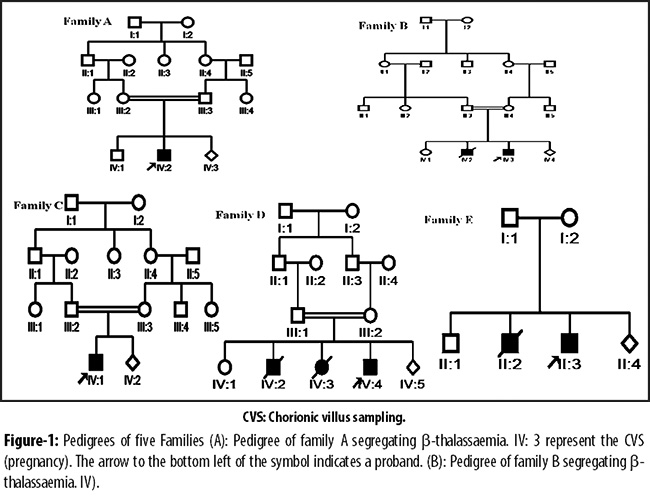 Once the causative mutation was found, the CVS was screened for this mutation. CVSs were analysed for prenatal diagnosis. CVS was taken through ultrasound-guided transabdominal needle biopsy. In transabdominal process, a syringe needle was inserted through abdomen and uterus and into the placenta. Syringe needle is being guided through ultrasound images. A small amount of tissue was taken into the syringe. Foetal tissue was collected in 5mL heparin Vacutainer which contained saline solution (0.9%). CVS was then collected from the Multan Institute of Nuclear Medicine and Radiotherapy (MINAR) and directly sent to Human Molecular Genetics Lab (HMG) of the National Institute for Biotechnology and Genetic Engineering (NIBGE), Faisalabad, for further analysis (Figure-2). 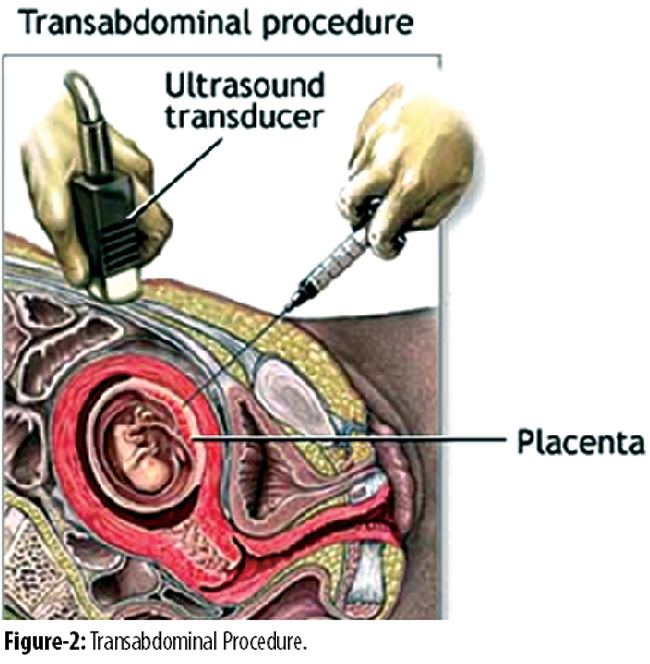 A total of five families were included in this study. DNA was extracted from affected child, mother and father. The DNA of the family was screened for IVS1-5 substitution through ARMS-PCR. Electropherogram showed that both mother and father were heterozygous (carrier) for IVSI-5 mutation whereas the affected child was homozygous for this mutation. Once the family was screened for the mutation, ARMS-PCR was performed for prenatal diagnosis of foetus. Electropherogram revealed that foetus, too, was homozygous.
Five chorionic villus samples were examined to analyse the molecular defects which were responsible for beta-thalassaemia in the families. Prenatal diagnosis was performed for these families. They had at least one affected child (thalassaemia major) who was transfusion-dependant. ARMS-PCR was found to be a very sensitive method to find the known point mutations present in beta-globin gene. Point mutations identified included intervening sequence I-5 (G-C), frameshift codon 8/9 (+G) and frameshift codon -41/42 (-TTCT). In the present study, point mutations which were identified by ARMS-PCR included IVSI-5 (G-C), FSC 8/9 (+G) and FSC-41/42 (-TTCT) (Figure-3). 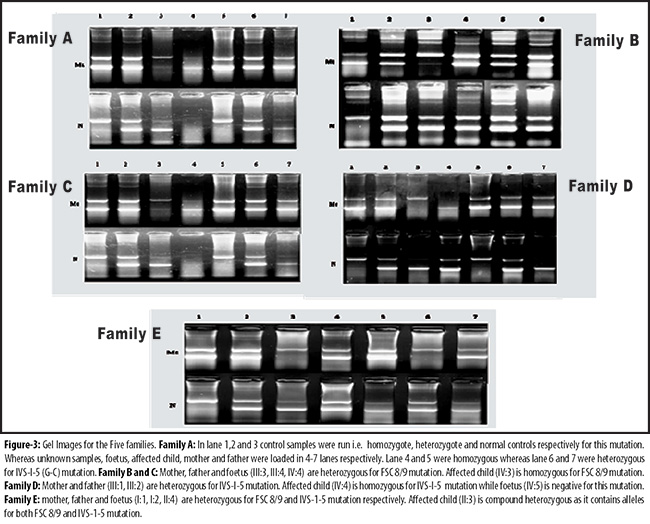 Five CVSs were examined to analyse the molecular defects which were responsible for b-thalassaemia in the families studied. Prenatal diagnosis was performed for these families. They had at least one affected child (thalassaemia major) who was transfusion-dependant. Due to this purpose, blood samples were taken from the parents, normal/carrier and affected child sibling/s if available. Before the screening of mutation/s in CVS the genotype of the family was identified. For this reason, parents and affected child were diagnosed first before CVS. It gave a quick prenatal diagnosis of CVS during the pregnancy.
Initially, the molecular defects were identified by analysing the DNA for most common mutation, i.e. IVSI-5 (G-C) was checked. If it was not found then second common mutation, i.e. FSC8/9 (+G) was checked. Moreover, 21 different b-thalassaemia defects and three Hb variants have been known so far in Pakistani population.6 In Pakistan, the allele frequency and geographical distribution for these mutations had also been identified. Out of these 21 known mutations, 3(14.2%) mutations, IVSI-5 (G-C), FSC8/9 (+G) and FSC-41/42 (-TTCT) form 86% of the total defects which cause b-thalassaemia in Pakistan.17 It is performed by using simple PCR technique; ARMS-PCR, 218 b-globin alleles were identified for 8 b-thalassaemia mutations, i.e. IVSI-5 (G-C), FSC 8/9 (+G), FSC-41/42 (-TTCT), 619 bp deletion, IVSI-1 (G-T), Codon 15 (G-A), Codon 16 (-C) and Cap+1 (A-C).
ARMS-PCR is a very sensitive method used to find the known point mutations present in b-globin gene. These were used for identification of affected/carrier individuals for b-thalassaemia by using specific primers for the known mutations.18
Families A and D showed IVS1-5 (G-C) mutation. It is the most common mutation wherein G-C substitution occurs at nucleotide 5 of donor splice site at consensus sequence of IVS-1. Family B showed FSC 8/9 (+G) mutation. It is the second-most common mutation in the globin gene where G is inserted between codons 8 and 9 which subsequently changes the whole reading frame of the b-globin gene and causes the partially deleted gene. Family C showed FSC 41/42 (-TTCT) mutation, in which four nucleotides TTCT were deleted between codons 41 and 42. Family E showed compound heterozygosity. In this condition an individual bears two heterogeneous recessive alleles at a specific locus. It causes genetic disease in a heterozygous condition. It shows that two individuals, having two dissimilar alleles, which are technically heterozygous but both the alleles are defective. This family showed both IVS1-5 (G-C) and FSC 8/9 (+G) mutations.
With its high prevalence, thalassaemia is causing an increasingly severe public health burden for many countries in Southeast Asia. Since thalassaemia carriers have no symptoms and because of the complexity and heterogeneity of the disease, it is difficult to diagnose thalassaemia, especially the carriers, at the small health care units. Moreover, treatment of severe thalassaemia with regular blood transfusion and iron chelation is expensive. Thus, it is difficult to persuade international health agencies and governments that thalassaemia is a genuine problem of public health importance compared with other communicable diseases that these countries are handling. The purpose of this research was to find affected families having b-thalassemia through cascade testing. b-thalassemia has high prevalence in Pakistan due to a large number of hereditary families, low literacy rate, large family size, high birth rate, inappropriate accessibility of health care services and lack of disease awareness, etc. The rate of transfusion-dependent births in the coming years may be enormous. Treatments available for b-thalassaemia are highly costly and not available in Pakistan.

The best preventive action is to adopt the screening process to overcome the disease.

Disclaimer: None.
Conflict of Interest: None.
Source of Funding: The funding was provided by COMSATS Institue of Information Technology, Sahiwal Campus.