Incidence and pattern of Thrombocytopenia in cardiac surgery patients

Objective: To observe the incidence and pattern of thrombocytopenia in cardiac surgery patients.
Methods: This prospective, cohort study was conducted at the Aga Khan University Hospital, Karachi, from November 2014 to April 2015, and comprised adult cardiac patients. Patients with platelet count less than 150,000 x 109/L, history of malignancy, immune thrombocytopenic purpura and on chemo or radiotherapy were excluded. All information including demographics, platelet count, heparin doses, total cardiopulmonary bypass time, cross-clamp time, blood products transfused, any thromboembolic complication and the presence of infection were recorded on a pre-designed proforma. SPSS 19 was used for data analysis.
Results: Of the 177 patients, 130(73.4%) were males and 47(26.6%) were females. The overall mean age was 59.21±10.99 years. Thrombocytopenia was observed in 167(94.4%) patients. Of them, platelet count dropped below 50% in 71(42.5%) patients, 30-50% in 68(40.7%) patients and 20-30% in 28(16.8%) from the baseline value. Regarding pattern of thrombocytopenia, maximum drop in platelet count was noticed on 2nd and 3rd day of surgery. Furthermore, 9(5.3%) patients developed severe thrombocytopenia (<50,000 x 109/L).
Conclusion: The incidence of thrombocytopenia and its severity after cardiac surgery was very high in our study population when compared with western population.
Keywords: Platelet count, Cardiopulmonary bypass, Cross-clamp time, Thrombocytopenia. (JPMA 67: 1019; 2017)

Thrombocytopenia is commonly seen in critically ill intensive care unit (ICU) patients and the incidence varies between 35 and45%.1 This incidence is slightly higher in cardiac intensive care unit (CICU), particularly those who require cardiopulmonary bypass (CPB).2 The presence of thrombocytopenia not only increases the risk of bleeding after CPB but also influences the patient management in CICU.3 Decision about invasive lines placement and initiation of anticoagulation after surgery may be delayed.
Drop in platelet count (PC) in cardiac surgery is mainly due to haemodilution, platelet activation due to contact with extra corporeal circuit and heparin-induced thrombocytopenia (HIT). Significant platelet activation occurs after on-pump coronary artery bypass grafting (CABG) when compared with off-pump CABG.2,4 Maximum drop in PC after CPB is usually seen between day one to day four,5,6 after which the PC usually starts to recover. In addition, PC may also be reduced due to sepsis, post-transfusion thrombocytopenia,7 drug-induced and thrombotic thrombocytopenic purpura (TTP). Sepsis is usually associated with moderate reduction in PC while severe thrombocytopenia (< 50,000 x 109/L) is usually due to disseminated intravascular coagulation (DIC).
Two types of patterns have been described in HIT patients. The incidence of these two patterns in cardiac patients is around 21%8 and it can be used as a potential diagnostic criterion for HIT patients. In pattern 1, the drop in PC recovers within 5 days after cardiac surgery and then again starts to drop and remain low beyond 7 days. The second pattern is described as persistent drop of PC for 7 - 10 days without recovery.
Large doses of unfractionated heparin (UFH) are used in cardiac surgeries to prevent extracorporeal circuit-related thrombosis. Advantages of UFH include short half-life and easy monitoring during CPB by measuring activated clotting time (ACT). In addition, it can be easily reversed by protamine sulphate. The use of UFH is associated with higher risk than low molecular weight heparin (LMWH) in post-operative period. CPB induces the release of platelet factor 4 (PF4) in circulation, which combines with heparin to form a heparin-PF4 complex.5,6 Antibodies against this complex can be detected in 50% of post-cardiac surgery patients,7 but very few proceed to heparin HIT. HIT (type II) is diagnosed when antibodies are detected along with clinical manifestations. Thrombosis is usually seen in venous circulation and may present with adrenal haemorrhage due to adrenal vein thrombosis and necrosis. Although the absence of antibodies against complex rule out HIT, its presence does not confirm the diagnosis. Interestingly, various studies have shown that 4-20% of cardiac surgery patients already have antibodies pre-operatively.6
The current study was planned to differentiate the pattern of thrombocytopenia and its incidence among Pakistani population coming for cardiac surgeries (elective/emergencies) on CPB, as compared to the Western population.

This prospective, cohort study was conducted at the cardiac operating room and CICU of the Aga Khan University Hospital (AKUH), Karachi, from November 2014 to April 2015, and comprised adult cardiac patients. Approval for the study was obtained from the institutional ethics review committee. Written informed consent was taken from all the patients. Patients aged between 35 and 70 years were included. Non-probability consecutive sampling technique was used. Patients with platelet count less than 150,000 x 109/L, history of malignancy, immune thrombocytopenic purpura (ITP) and those who were on chemo or radiotherapy were excluded.
Standard anaesthesia protocols were followed in each patient. Intravenous UFH 400 IU/kg was used in all patients to achieve ACT > 480 seconds before CPB. This value was maintained during the CPB period using additional heparin. The effect of heparin was reversed by protamine sulphate after coming off CPB. First blood sample was drawn as soon as patient arrived in the ICU.
All data was documented on a proforma, which included demographics, PC at different intervals (days 0 - 9), heparin doses, total CPB time, cross clamp time and blood products transfused. Any thromboembolic complication (myocardial infarction (MI), stroke, arterial or venous thrombosis) and the presence of infection were also recorded during the patients\\\' CICU stay. SPSS 19 was used for data analysis. Incidence of thrombocytopenia was computed. Frequency and percentage were computed for categorical variables and analysed by chi-square test. Kolmogorov-Smirnov test was used to check normality for numeric data. For normally distributed data, mean and standard deviation were estimated and analysed by analysis of variance (ANOVA). Median and interquartile range (IQR) were computed for non-normal data and analysed by Kruskal-Wallis test. Paired t-test was also applied to observe difference in mean platelet count before and after each follow-up. P<0.05 was considered significant. 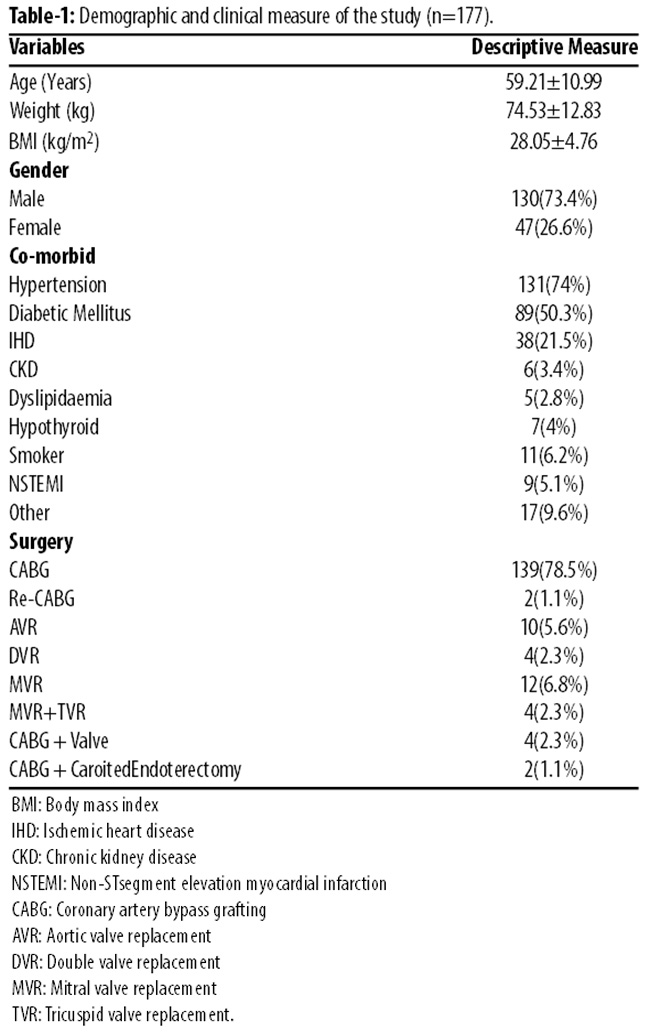 Monitoring of PC after cardiac surgery is important for various reasons. Firstly, it helps in the diagnosis of a serious condition called HIT. In addition, the decision about continuation of heparin (LMWH or UFH) after surgery has also become an important issue. The incidence of HIT in cardiac surgery patients is 1-2%.6 It is also difficult to diagnose as we cannot rely on low platelet count alone. Although the presence of thrombocytopenia is essential for diagnosing HIT, its incidence is very high after cardiac surgery. Diagnosis is based on clinical findings and various laboratory tests.
Different patterns of platelet changes have been mentioned after cardiac surgery. These patterns include pattern I (biphasic drop in PC), pattern II (persistent drop) and more common scenario (transient drop in PC) in initial 2-3 days and then gradual increase. Despite the presence of low PC and antibodies in cardiac patients after surgery, the incidence of HIT is very low.
HIT is usually seen in pattern 1, where the thrombocytopenia is biphasic. The initial drop is followed by transient rise in PC and then the count falls again. In the present study, we were unable to find pattern 1, may be due to the inadequate sample size to reveal this pattern. None of the patients in our study showed any thrombotic complications and laboratory tests were not done in any of these patients.
Early onset and persistent thrombocytopenia (pattern II) was seen in 5(2.99 %) patients in our study (Figure). 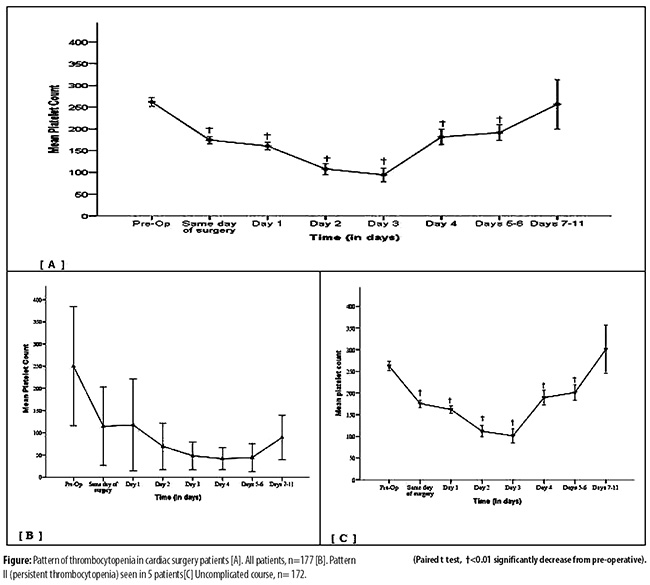 These patients showed persistent drop of PC (<100,000 x 109/L) till 7 days, after which three of these patients started to recover and by the 9thpost-operative day (POD) their PC were>100,000. Only two patients had PC<100,000 even on 9th POD. They also showed severe thrombocytopenia (<50,000 x 109/L).Selling et al.9 disagree with the previous studies that type II pattern is also associated with HIT, even in the presence of positive antibody test. They also found 4.3% patients with early onset (<4 days) and persistently (7 days) reduced PC after cardiac surgery. They also noticed high 30 days\\\' mortality rate (12%) in these patients. This pattern is most probably due to causes other than HIT and if anticoagulation is required then heparin can be continued in these patients.10 Pouplard et al.7 also agree that pattern II is less specific for HIT but they also suggested that tests should be done to confirm the presence of HIT if PC remains low after 6 days post-operatively. PC should start to recover within 7-10 days after heparin stoppage in HIT patients. Four out of five patients showed some recovery after persistent drop of PC for 7 days. We are not sure whether HIT causes this initial drop and improvement or other factors like sepsis.
Around 82.4% patients developed more than 30% drop in PC after surgery (Figure). More important finding was that >50% drop in PC was seen in 41.5% of patients, which is higher than the previous study in the same institution.5
Transient decrease in PC is common after cardiac surgery due to haemodilution, mechanical disruption, sequestration in the lungs, platelet consumption in the wounds and contact of blood with extra corporeal circuit leading to platelet activation and adhesion. Usually, PC nadir is seen on 2nd or 3rd day after cardiac surgery, with subsequent increase in PC (Figure). In our study, the lowest PC fall was seen on day 1 when 79 patients showed lowest count. Only one patient showed the lowest count after five days (on the 7th day).
Association between CPB time and severity of PC reduction was also noticed in our study (Table-2). Long CPB time requires more frequent doses of heparin and longer contact time with extracorporeal circuit, which may cause not only destruction of platelets but also platelet activation and release of large amount of PF4. Drop in platelet count and function is less pronounced in off-pump CABG.
We were unable to find any association of individual anaesthetist, perfusionist or surgeon on the severity of thrombocytopenia. The amount of heparin given by anaesthetists and perfusionist also had no effect on drop in PC.
Moreover, 5.3% of our patients showed severe thrombocytopenia (PC <50,000), which is higher than another study conducted in post-cardiac surgery patients in ICU.9 In that study 2.9% showed severe thrombocytopenia. They also found 12% mortality in patients who continued to have persistent thrombocytopenia even after day 4.
Post-transfusion purpura with severe thrombocytopenia is more common in females and developed within two weeks of blood transfusion. When previously exposed females receive blood/ Platelet transfusion, it triggered a B cell-mediated immune response with increase in antibodies against human platelet antigen, which destroy normal platelets.
One of the limitations of the current study was that the patients were not followed for longer period of time to see changes in PC and for any thrombotic complication. Additionally, antibodies for PF4-heparin test were not done, particularly in suspected patients who showed pattern II.
Further studies with larger study population and immunological testing in suspected patients are needed to fully evaluate the thrombocytopenia in cardiac surgery patients.

The incidence of thrombocytopenia and its severity after cardiac surgery was very high in our study population when compared with western population. We were unable to find usual HIT pattern in any patient which may signify that the incidence of HIT was very low in our population.