Myocardial infarction (MI) is a major cause of death and disability worldwide. Platelets play a crucial role in the pathogenesis of acute myocardial infarction (AMI). Activated platelets adhere to the vessel wall at the site of a ruptured plaque and initiate formation of an arterial thrombus, which leads to infarction.1 This increased platelet activation is reflected in the elevation of platelet-derived microparticles (PDMPs) and soluble P (sP)-selectin.2 Increasing evidence suggests that markers of platelet activation can be used to identify the disease activity.3 Although AMI is the most common diagnosis occurring in hospitalised patients, it has been seen that 50% of patients hospitalised for suspected acute coronary syndrome ultimately leave the hospital with other diagnosis. Currently, cardiac biomarkers are an integral part for the diagnosis of AMI. Among all, cardiac troponin appears to be the most sensitive and specific biomarker, but it is insufficient because it will not detect 10 to 15% of patients at risk. Cardiac troponin and creatinekinase (CK)-myocardial band (MB) also does not permit early detection of MI. So, there is a need of ideal biomarkers with high sensitivity and specificity for early diagnosis (1-3h) having prognostic and therapeutic implications.4
Microparticles (MPs) constitute a heterogeneous population, differing in cellular origin, numbers, size, antigenic composition, and functional properties. They are derived from various cells including platelets, leucocytes, lymphocytes, erythrocytes, and endothelial cells.5 However, PDMPs represent approximately 70-90% of circulating microparticles in the cardiovascular system.6 PDMPs are potentially procoagulant, since they expose negatively charged phospholipids, possess activated coagulation factors Va and Xa, as well as tissue factor. PDMPs have been demonstrated to be increased in patients with AMI, transient ischaemic attacks, cardiopulmonary bypass and peripheral arterial disease.2,7
P-selectin (CD62P) is a cell-adhesion molecule produced by activated platelets and endothelial cells. It is rapidly translocated from platelet a- granules and endothelial weibel-palade bodies to the cell surface. Consequently, enzymatic cleavage of expressed p-selectin and alternative splicing of the messenger ribonucleic acid of p-selectin occur quickly, giving rise to sP-selectin in the peripheral blood that can be detected.8 Soluble p-selectin is considered to be a marker of platelet activation and a direct inducer of pro-coagulant state.9
The current study was planned to measure levels of PDMPs and sP-selectinin AMI patients by enzyme-linked immunosorbent assay (ELISA) and compared them with healthy controls. Additionally, we analysed the correlation of PDMPs and sP-selectin with troponin T (TnT) and CK-MB. We also analysed serial changes in levels of PDMPs and sP-selectin after acute MI.

This case-control study was conducted in Department of Haematology, University of Health Sciences Lahore from April 2013 to September 2013, and comprised AMI patients in group 1 and healthy controls in group 2. The study was approved by local ethics committee. Patients were enrolled after informed written consent. The sample size was calculated by keeping the power of study equal to 90% and level of significance equal to 5%.10
Desired power = 90%; desired level of significance = 5%; mean difference = 47.3 - 36.8 = 10.5; standard deviation of group 1= 15; standard deviation of group 2= 11.
The calculated sample size was 33 in each group, but it was increased for more statistical accuracy. Additionally, ELISA was used to measure the levels of PDMPs and soluble P-selectin in this study.
Patients with typical chest pain >30 minutes and <12 hours, ST segment elevation or depression in at least two contiguous leads on electrocardiogram (ECG), cardiac troponin +ve and CK-MB ( >24 U/L) were included. By contrast, patients with any acute or chronic inflammatory disease, malignant disorder, hepatic or renal dysfunction, history of venous thromboembolism, stroke, anticoagulant therapy or previous coronary artery bypass surgery were excluded from the study. Patients\\\' age- and sex-matched healthy controls were also selected. This matching was in a whole group, not in a pair-wise manner. Controls with any inflammatory disorder, malignancy, cardiovascular risk factors or on anticoagulant therapy were excluded. Controls were either spouses or acquaintances of patients, hospital staff or their friends.
Samples were taken before the start of anticoagulant or thrombolytic therapy. Five ml blood was collected with a 21-gauge needle to minimise platelet activation using an aseptic technique. It was divided into two vaccutainers. Two ml was transferred in vaccutainers containing 1/10 volume of ethylenediaminetetraacetic acid (EDTA)- acid-citrate-dextrose (ACD) anticoagulant for analysis of PDMPs. It was centrifuged at 4000g for 10 minutes to get platelet-poor plasma at room temperature and 200µL from upper layer supernatant was collected and stored in 0.5ml Eppendorf tubes at -80°C until analysis by Human PDMP ELISA kit (Glory Science Co. Ltd, United States) which is a quantitative sandwich immunoassay kit.
Then, 3ml blood was transferred in vaccutainers containing sodium citrate for sP-selectin measurement and was centrifuged at 3,000 revolutions per minute for 20 minutes at room temperature to get platelet-poor plasma. This was stored in 0.5ml Eppendorf tubes at -80°C until analysis by commercially available solid-phase sandwich ELISA kit (Glory Science Co. Ltd). All samples were processed within one hour of sample collection. All samples were thawed for 15minutes at 37°C before analysis.
TnT (Elecsys 2010, Roche) and CK-MB (912 Automatic analyser, Roche) were measured according to the manufacturer\\\'s instructions. Cardiac TnT and CK-MB were measured at admission and then at 4-6 hours if initial results were negative. Platelet count, total cholesterol and random blood sugar measurements were made using standard laboratory methods.
Data was analysed using SPSS21. Continuous variables were expressed as mean ± standard deviation (SD), whereas categorical variables in the form of frequency and percentage. Student\\\'s t-test was used to compare PDMPs and sP-selectin and other continuous variables in cases and controls. Student\\\'s t-test was applied because test variables were continuous and grouping variable was categorical, whereas logistic regression is best one when both test variables and grouping variable are categorical.
Comparisons were also made by using Student\\\'s t-test. Pearson\\\'s correlation coefficient was used for correlation analysis because it is used to determine relationship between continuous variables. P<0.05 was considered significant. 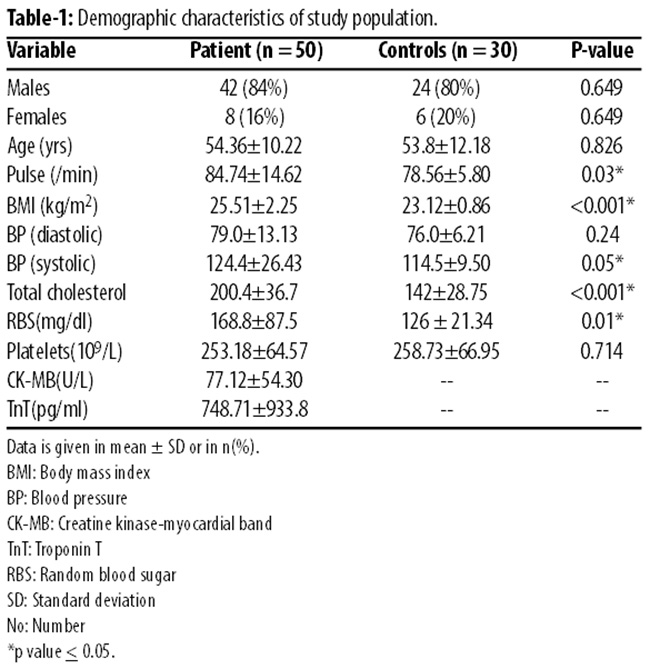 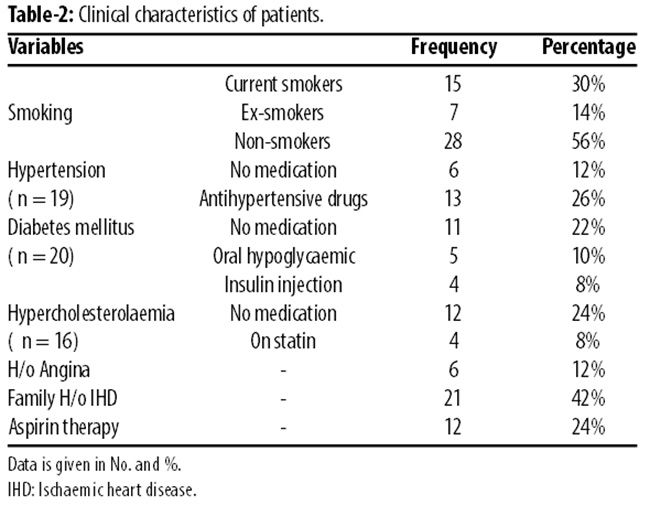 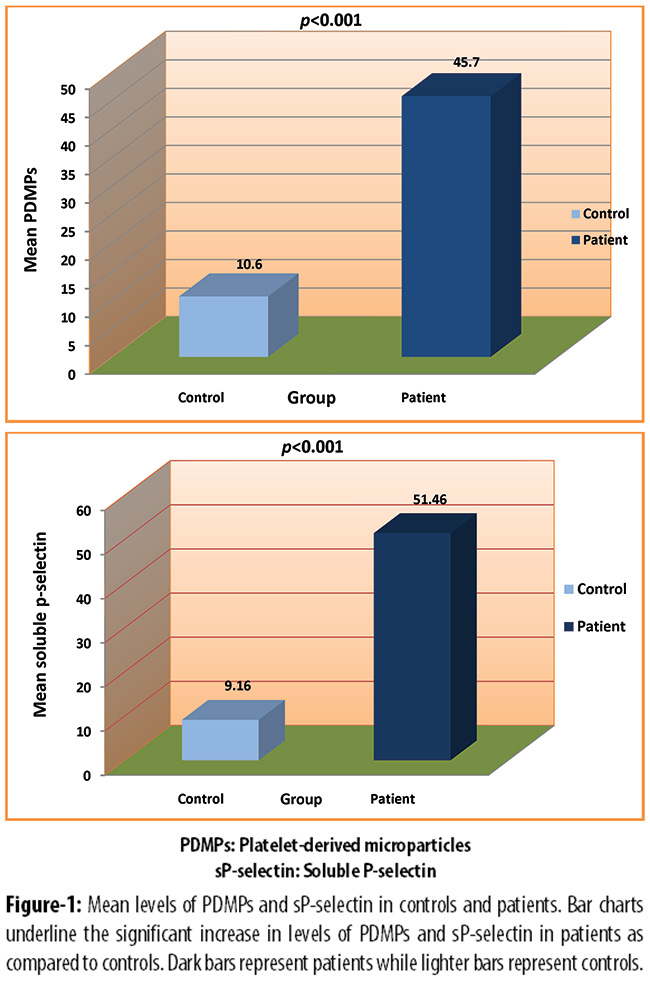 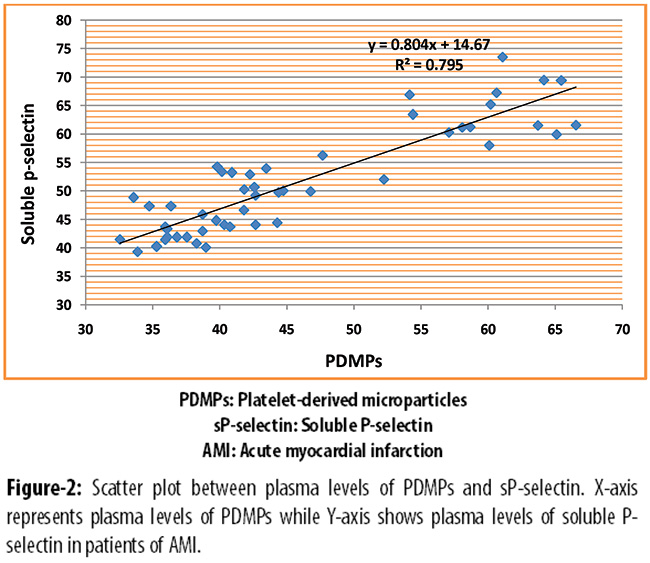 Levels of platelet-derived microparticles and soluble P-selectin can be used as novel early diagnostic marker of acute myocardial infarction.

We are grateful to the University of Health Sciences (UHS), Lahore, Pakistan, for technically supporting the study. Thanks are also due to the nursing and laboratory staff of the Punjab Institute of Cardiology for their valuable support and patience.
Disclaimer: None.
Conflict of Interest: None.
Source of Funding: The study was provided financial support from the UHS.