Objective: To determine the yield of 48-hour Holter monitoring in children with unexplained palpitations and the significance of associated symptoms.
Methods: This descriptive study was conducted at the Children\\\'s Hospital and Institute of Child Health, Lahore, Pakistan, from January 1 to December 31, 2015. All children above 5 years of age with history of intermittent palpitations and normal basic cardiovascular workup were enrolled. A 48-hour Holter study was performed using Motara Holter Monitoring System. Frequency of various symptoms and abnormal Holter findings were analysed. SPSS 21 was used for data analysis.
Results: Of the 107 patients, 69(64.5%) were males and 38(34.5%) females. The median age was 10 years (interquartile range: 5-18 years). Most common concomitant symptoms with palpitation included syncope/pre-syncope in 35(32.7%) patients, chest pain 22(20.5%), shortness of breath 21(19.6%) and colour change/pallor 11(10.3%). Holter recording was positive in 40(37%) patients. Frequent premature ventricular contractions 12(11.2%) and atrial ectopic beats 9(8.4%) were the most common findings. Holter findings were significantly more common in patients with history of shortness of breath and colour change/pallor during palpitations (p=0.002).
Conclusion: Extended 24-hour Holter monitoring in children with palpitations was an inexpensive, non-invasive investigation with a reasonably high diagnostic yield in detecting arrhythmias.
Keywords: Holter monitoring, Palpitations, Children, Arrhythmias. (JPMA 67: 975; 2017)

Palpitation is defined as a person\\\'s awareness of a disagreeable sensation of heartbeat or pulsation in the chest and/or adjacent areas.1 Palpitations are generally benign in children. However, they are terrifying events for children, a significant cause of concern for their family and a common reason of referral to a paediatric cardiologist. Some patients may have associated symptoms like syncope, pre-syncope, vertigo, dizziness, chest pain and colour change. Palpitations usually occur as a simple physiological response to factors like anxiety, fever, anaemia, hypovolaemia, hypoglycaemia, orthostatic hypotension or vasovagal syncope. These children, however, have to be screened for much more serious conditions like hyperthyroidism, pheochromocytoma, arteriovenous fistula and certain stimulant drugs.2 Among cardiac reasons, tachyarrhythmias can be a significant underlying pathology in these children. These events usually occur for short durations and revert to normal before arranging a standard electrocardiogram (ECG). In most situations, baseline ECG is normal after the event and does not help in establishing the diagnosis. Up to 16% patients may have no underlying cause for palpitations.3
Discerning cardiac from non-cardiac causes is important considering the potential risk of sudden death in children with an underlying cardiac aetiology. When first-line non-invasive studies such as ECG and echocardiography do not reveal any underlying structural or functional cardiac problem, the diagnosis of unexplained tachycardia in the young is a dilemma. According to the American College of Cardiology/ American Heart Association guidelines, palpitations with no underlying aetiology constitute a class-I indication for ambulatory ECG monitoring.4,5 Different external or implantable devices can be used according to individual patient\\\'s needs. External devices include Holter monitors, event recorders, external loop recorders, and mobile cardiac outpatient telemetry. Implantable devices are implantable loop recorders (ILRs) or permanent/temporary pacemakers/ implantable cardioverter defibrillators (ICD) equipped with diagnostic features.5 Each device presents with its own unique advantages and disadvantages.6 If all non-invasive studies remain negative despite significant and intolerable symptoms, advanced invasive diagnostic methods like electrophysiological study for the induction of tachyarrhythmia may be considered.2,4,5
Holter monitoring is one of most widely available and economic non-invasive methods for detecting rhythm abnormalities in children, independent of need for child\\\'s absolute cooperation.7 A 24- to 48-hour Holter study is especially useful in patients who experience frequent symptoms and can help avoiding more invasive electrophysiological studies.5,8 The current study was planned to determine the diagnostic yield of 48-hour Holter recording in children with unexplained palpitations and to determine the significance of various symptoms associated with palpitation in predicting the outcome of Holter studies.9

This descriptive study was conducted at the Department of Cardiology, the Children\\\'s Hospital and Institute of Child Health, Lahore, Pakistan, from January 1 to December 31, 2015. All patients aged between 5 and 18 years presenting to the department with history of intermittent sustained palpitation (>1 minute) having normal cardiovascular examination, sinus rhythm on 12-lead ECG and no structural or acquired heart disease on echocardiography were enrolled in the study. Patients with history of documented arrhythmias, known medical conditions like hyperthyroidism, or history of anti-arrhythmic medication were excluded. Informed consent was obtained from the children\\\'s parents. The sample size was calculated with 95% confidence interval and 8% margin of error, assuming an expected yield of 21% from Holter recording in patients with unexplained palpitations.6 Detailed history of any associated symptoms i.e. syncope/pre-syncope, chest pain, shortness of breath, colour change (pallor) or family history of arrhythmias was recorded followed by Holter monitoring for 48 hours, using Motara Holter Monitoring system. Holter recording was analysed using H-Scribe ECG data analysis software. Holter recordings were studied for tachyarrhythmia, bradyarrhythmias, and premature atrial, junctional and ventricular complexes.5 Taking into account the variations in ECG, frequent premature ventricular contractions (PVCs) defined as more than 30 times in any 1 hour during the study or multifocal/polymorphic PVCs were considered abnormal for ventricular complexes.10 Three or more consecutive PVCs were labelled as run of ventricular tachycardia (VT). Similarly, more than 30 premature atrial contractions (PACs) in 1 hour were labelled as frequent PACs.11 Run of supraventricular tachycardia (SVT) was labelled if more than 20 consecutive complexes were recorded on Holter.11 Sinus pauses and heart rate (minimum, maximum and average) of all patients were also documented. Data was analysed using SPSS 21. Frequencies were calculated for qualitative variable including gender, syncope/pre-syncope, chest pain, shortness of breath, colour change (pallor) and family history of tachy/bradyarrhythmia. Median with range was calculated for quantitative variable like age and heart rate. Chi-square test was applied as test of significance for any significant difference in symptoms of patients with normal or positive Holter recording. P<0.05 was considered significant. 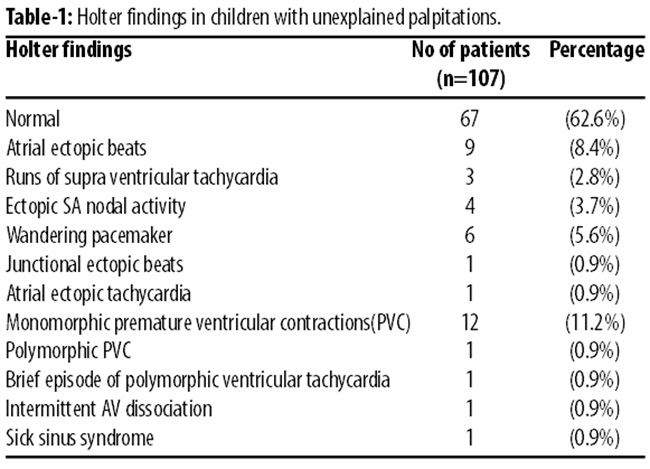 Continuous Holter ambulatory ECG monitoring in our study had a high yield (37%) in detecting arrhythmias in children with palpitation. These figures were in agreement with previously published data showing about 43% cardiac aetiology for palpitation in children3. The yield was higher than most studies (21%).6 This increase was mainly due to longer study duration. In general practice and most studies on Holter, a 24-hour recording is performed. In our study, the first 24-hour record did have a lower yield of 27%. However, the extended duration improved the yield by 10%. Extended study for up to 48 hours has also shown better diagnostic results in previously published data.4,8 Thus, our study supports 48-hour study in children with unexplained palpitation rather than conventional 24-hour study.
Arrhythmia was significantly higher in boys with palpitation in our study (p=0.037). In girls, psychosomatic aetiology was the main reason for palpitation. However, our finding emphasises upon the need for extra vigilance in boys, once presenting with symptoms.
Premature ventricular complexes were the most common abnormal finding during the study followed by premature atrial contractions. This finding was similar to previous studies and matched adult data having PVCs in most cases.9 Pallor and shortness of breath during palpitation were significantly associated with occurrence of supraventricular tachycardia or premature atrial complexes (p<0.001). These findings correlate with the physiological response of the body to supraventricular extrasystole or tachycardia and are compensatory mechanism against fall in cardiac output. Though usually benign, they can be life-threatening if left unattended.11 Syncope, on the other hand, was significantly associated with ventricular tachycardia or PVCs. This finding was also in accordance with previous studies in adult and paediatric populations alike, finding PVCs as the most common cardiac aetiology for syncope.12
Holter study has its critics claiming this modality as less useful than long duration recorders. Holter has its inherent limitations, but it is still the most practical and economical method of fairly good number of arrhythmias especially in children.7 The vast expansion of technology has led to the development of as small as 50g portable recorders compatible with small children, making Holter recording the only feasible mode of recording rhythm over prolonged durations without limiting child\\\'s daily routine. The frequency of the symptoms should be high to detect them during the study.4 Prolonging the recording time greatly overcomes this setback as documented in our study. Electrocardiographic documentation of symptomatic episodes of palpitations by means of traditional 24- or 48-hour Holter monitoring is also sometimes challenging as children are not able to respond when palpitations occur. Patient-activated ECG recorders have been advocated to be a more useful tool in the diagnosis of arrhythmias in such patients, detecting arrhythmia in 66-89% of patients with paroxysmal palpitations or dizziness.13,14 Unfortunately they are much more expensive and even in adult population, on multiple occasions the patient fails to self-activate the event recorder.6 Self-activation becomes even a greater issue in children who cannot fully understand the concept. Hence, conventional Holter recording still remains an important diagnostic tool in children in resource-limited set-up providing guidance regarding the need of further investigations. Despite all these limitations, Holter had a decent diagnostic yield of 37% of patients in our data. This is in agreement with the 35% yield of Holter recording documented by Kinlay S et al.15 A 48-hour Holter instead of 24-hour conventional Holter seems to equate practically the yield of much more expensive and technically demanding event recorders. Dagres N. et al. also demonstrated a 48-hour Holter study yield of 67% in comparison to 59% in case of 24-hour Holter.16 In our study, 48-hour Holter also had 10% additional yield in detecting significant arrhythmias in children.
Serious arrhythmias were less common in our study as in other published literature. However, as documented previously, in the presence of relevant symptoms, minor abnormalities, which are otherwise insignificant in asymptomatic patients, may indicate potentially significant underlying conduction abnormalities e.g. frequent PAC\\\'s are considered predictor of atrial fibrillation.17 The yield of Holter monitoring has been reported to be around 55 to 68.5% in patients with symptoms of palpitation, dizziness and syncope.18,19 These findings warrant a close follow-up. For instance, premature atrial contractions, though generally benign, can serve as a trigger for supraventricular tachyarrhythmia as well as they may cause the heart to beat inefficiently and cause symptoms if there frequency exceeds 15-20/minute.11 Frequent PACs have been documented as significant risk factor for stroke and atrial fibrillation.20 Similarly frequent PVCs are known to cause progressive left ventricular dysfunction, reversible with medication if started early.21,22
Among the patients with positive Holter findings, 3 patients with SVT were treated with beta-blockers. One of them did not respond to therapy and was put on amiodarone. Patient with atrial ectopic tachycardia in our study was treated with digoxin. Patient with VT was referred for ICD and sick sinus syndrome received a permanent pacemaker. The rest of the patients were advised close follow-up. One of the patients with frequent PACs did develop atrial ectopic tachycardia that was controlled medically with digoxin therapy. Symptomatic patients with frequent PVCs were managed with sotalol. None of these patients had left ventricular dysfunction.
Considering symptomatology based on history rather than diary keeping during Holter recording, although did not allow finding a direct cause effect relationship, it did help in picking potentially significant conditions prior to actual life threatening arrhythmia. The emphasis was not placed on strict simultaneous finding as many times the patients fail to identify the correct timing as documented in various studies on Holter and Event recorders.

Holter monitoring in children with palpitations was found to be an inexpensive and non-invasive investigation that has a reasonably high diagnostic yield in detecting arrhythmias when performed over an extended duration of time (48 hours). It may be used as part of the array of first-line investigations to rule out cardiac arrhythmias in children, especially in the presence of palpitations along with additional history of colour change (pallor), shortness of breath or syncope.
Disclaimer: None.
Conflict of Interest: None.
Source of Funding: None.

Impact of social interdependence on emotional well-being of medical students