Knowledge and attitude of physicians about antimicrobial resistance and their prescribing practices in Services hospital, Lahore, Pakistan

A cross sectional study was conducted in Services Hospital, Lahore using a self administered questionnaire to test the knowledge, attitude and prescribing practices of residents and attending physicians using non-probability convenience sampling. A total of 116 questionnaires were filled (Response rate=77.3%). Knowledge was below average (mean score of 3.66±1.1). Only 18 physicians (16%) could correctly estimate the rates of resistance of Klebsiella pneumoniae and pseudomonas aeruginosa to cephalosporin. Mostly physicians reviewed their decisions to prescribe an antibiotic by discussing with a senior colleague (n=93; 80%). When they did, the senior colleague sometimes recommended a different antibiotic (n=106; 91%). Seventy seven physicians (66%) reported that they prescribed more than one antibiotic per day. Physicians also stated that their decision of antimicrobial prescription was influenced by patient\\\'s socioeconomic status (n=108; 93.1%) and patients\\\' demands (n=24; 20.7%).
This study highlighted the importance of Antimicrobial stewardship and revealed topics to address during future antimicrobial prescribing interventions such as dissemination of information about local resistance rates and encouraging knowledge about antimicrobials.
Keywords: Antimicrobial resistance, Pakistan, Lahore, KAP study.

Irresponsible prescription of antimicrobials (AMs) is the driving factor for the growing antimicrobial resistance (AMR) crisis. Appropriate utilization of drugs necessitates optimal prescription habits. Prescriptive mishaps include inappropriate usage of drugs in the form of polypharmacy, inadequate dosage, failure to adhere to medical guidelines and inappropriate selection of drugs.1 Among the most commonly inappropriately prescribed drugs are antimicrobials with the problem of bacterial resistance to commonly used antibiotics becoming a world-wide burden.2 Consequences of such resistance are grave, affecting both the economical and health sectors. These may take several forms including increased morbidity and mortality, reduction in quality of antibiotic therapy, increased treatment costs, and un-justified loss of resources. These effects are more prominent in developing countries like Pakistan suffering both economical challenges and weak institutional foundations.2,3
Adherence to appropriate prescriptive habits necessitates following the rational steps for optimal prescription including defining the correct diagnosis, planning a safe and effective treatment plan, appropriate drug selection, choosing the effective dosage and duration, writing the prescription, conveying enough information to the patients and evaluation of the treatment procedures according to the patient\\\'s responses.4 In an effort to hinder antimicrobial resistance several parameters should be targeted including the inappropriate prescriptive practices. In order to achieve an improvement in this regard, an effective change in physician\\\'s behaviour should be sought. This requires a detailed understanding of the physician\\\'s knowledge about antibiotic resistance, factors influencing their decisions and their actual day to day prescriptive practices. This understanding is fundamental for development of optimal intervention strategies.5 KAP studies offer a great tool to investigate the driving forces behind the antibiotic prescriptive habits. They represent a valuable tool among other data collection methodologies including surveillance for actual antibiotic resistance and antibiotic consumption by patients providing the base-line for counter-interventions planning.2 However, little KAP-information exists regarding prescribers in hospital settings compared to publications reporting from community settings (Table-1).

One hundred and fifty self-administered KAP questionnaires, consisting of 34 questions were distributed among residents and attending physicians in 5 different wards in proportion to the volume of doctors in each ward. Of these 120 were returned, and 4 were discarded due to incomplete information. The study results are based on the analysis of data collected from 116 doctors. Questionnaires were distributed by non-probability convenience sampling on-site during working hours and the respondents were asked to fill and return it within 15 minutes after receiving informed consent from them. There was no incentive for subjects to participate. Participants were instructed to use no external sources to help them answer the questions. If there was a suspicion, that questionnaire was excluded from the study. The identity of the physicians was kept anonymous. The questionnaire content was based on a previous study described in the United States,6 Malaysia,7 Peru8 and Egypt9 and was adapted to the Pakistani system to maximize relevance. Prior to release, it was reviewed by community medicine physicians of services institute of medical sciences to assess the relevance and wording of the questions. The results section shows the different questions asked.
Data was entered and analyzed by using SPSS software version 23.0 for appropriate statistical analysis. T-test was used to assess if any association among variables of different questions had any statistical significance or not. P value of 0.05 or less was taken as significant.
Knowledge based questions were scored by giving a correct answer 1 mark and a wrong answer was given 0 marks, there was no negative marking. Then the sum of the scores was added for each participant and mean and standard deviation was calculated. Similar scoring technique has been used in previous researches.7,8,10 Questions testing attitude used a 5-point Likert scale.

Participants were grouped according to their specialty and position in the hospital. Unless otherwise stated, there were no significant differences between the participants belonging to different professional categories, levels or departments for the results presented below. All physicians agreed that knowledge of antibiotics is important for their medical career (currently and in the future). Of these, 112 (96.6%) acknowledged that antimicrobial resistance is a problem, 2 (1.7%) said it\\\'s not a problem while 2 (1.7%) said they did not know.

Out of the 7 questions that tested the knowledge of the physician, the highest score was 6/7 (n=4; 3.4%) and the lowest score was 1/7 (n=4; 3.4%). The mean score was 3.66±1.1. About one-sixth of the physicians (n=20; 17%) scored 5/7 and 45 physicians (39%) scored 4/7 in the knowledge section which was the mode.
As for the individual questions, there were 3 case-based questions, 1 question addressing safety of antimicrobials during pregnancy and 3 questions addressing the spectrum of antimicrobials and their ability to cross the blood-brain barrier. 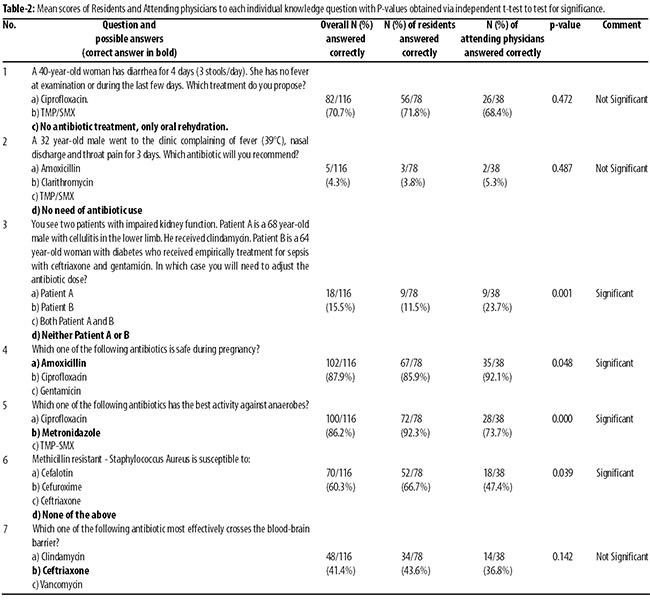 Table-2 shows the mean score of residents and attending physicians to individual questions and the p-value as a test of significance between the acquired results (obtained by the independent t-test).

Respondents were asked how many times they had received any teaching on antibiotics in the last year. Thirty seven (31.9%) physicians responded that they had not received any teaching while 53 (45.7%) physicians said that they only received some guidance about 1-3 times in the previous year. Around 102 (96.6%) physicians desired educational programmes on use of antibiotics
Majority of participants agreed that general knowledge on AMR should be considered when antibiotics are prescribed to a patient (n=101; 95.7%) and that local guidelines would be more helpful than international ones (n=94, 81%).

Physicians were asked about the frequency of their antimicrobial prescription and whether they felt it was difficult to select the correct antibiotic. The answer in the affirmative was stated by 46% (n=53). It was evident from the survey that majority of the physicians (n=76; 66%) prescribed antibiotics more than once a day.

Three different factors which might influence the decision of a doctor in prescribing an antibiotic were assessed. Only 27 (23.3%) physicians said their selection of an antibiotic was based on the expiry date/availability than the causative pathogen. It was also found that a patient\\\'s socioeconomic status (n=108; 93.1%) and a patient\\\'s demands (n=24; 20.7%) also influence some physicians decisions of AM prescription.

This study highlights the requirement of Antimicrobial stewardship with decisive long-term objective of reduction in antimicrobial resistance by providing the baseline knowledge attitude and prescribing practices of physicians. The results of this study acknowledge the problem of the spread of antimicrobial resistance through the irresponsible prescribing practices and warrants interventions to solve this issue. This study has revealed facts which should be addressed in future antimicrobial prescribing interventions such as dissemination of information about local resistance rates, promoting confidence in the quality of locally available antibiotics and encouraging a good grasp of the basic pharmacology of antibiotics.