Neonatal lupus erythematosus is an autoimmune disease resulting from the trans-placental passage of maternal anti-SSA/Ro, anti-SSB/La, and less frequently anti-RNP antibodies to the foetus. At the time of diagnosis 50% of mothers are asymptomatic. Neonatal manifestations of this multisystem disease may include congenital heart block, cutaneous lesions and haematological abnormalities. We present the case of congenital neonatal lupus erythematosus in non-identical twins, showing variability in clinical manifestation of this disease,despite receiving the same level of antibodies from the mother. This case adds to the growing body of evidence about the role of genetics and other feto-maternal contributing factors in addition to the presence of auto antibodies. It raises interesting questions about discordant disease expression in offspring\\\'s of the same mother.
Keywords: Neonatal lupus erythematosus, Twins.

Neonatal lupus erythematosus (NLE) is an uncommon and often undiagnosed disease resulting from the trans-placental passage of maternal antinuclear antibodies (ANA) and extractable nuclear antigen (ENA) antibodies to the foetus. Half of the mothers are either undiagnosed or asymptomatic.1 Antibodies most important in the pathogenesis of disease are anti-SSA/Ro, anti-SSB/La, and less frequently anti-RNP. Clinical expression is variable however cardiac manifestations are common, irreversible and often associated with a high mortality.2,3 Early pacemaker implantation in a structurally normal heart may be a lifesaving intervention and should be considered.4 We present a case of congenital NLE with clinical and laboratory differences, showing the discordant clinical spectrum in twins receiving the same level of antibodies from the mother.

In April 2015 a case of dichorionic diamniotic twin delivery presented at Shifa International Hospital in a multigravida (G 6 P 3+2) mother. Parents were consanguineous. Mother was diagnosed with hypothyroidism secondary to Hashimoto\\\'s thyroiditis 10 years ago and was receiving Thyroxin replacement therapy. There was a history of two miscarriages in the first and second trimesters respectively followed by two preterm deliveries in subsequent pregnancies that are thriving well. During these pregnancies she had a history of pregnancy induced hypertension. Her current pregnancy remained uneventful apart from a significant persistent foetal bradycardia detected antenatally at 36 weeks gestation in one of the twins which lead to the delivery by caesarean section of two baby girls.
TWIN 1: Weighing 2.2 kg born with an Apgar score of, 7 and 8 at 1 and 5 minutes was a well looking active newborn. However her heart rate varied between 40-60 beats per min with a grade 3/6 systolic murmur. She was pink and saturating at 95%in room air. Her ECG showed a complete 3rd degree heart block (Figure). 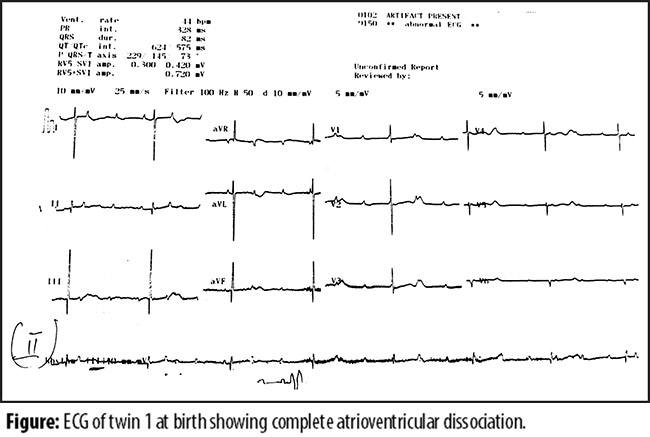 Echocardiogram revealed a patent foramen ovale with normal ventricular function and no structural defect. Her systemic examination, thyroid function tests and other investigations including a complete blood count were normal. In view of her bradycardia a permanent epicardial pacemaker was implanted on the 6th day of life. She was discharged in stable condition on the 10th post-operative day at a paced heart rate of 110 beats per minute.
TWIN 2: weighing 1.9 kg born with an Apgar score of 8 and 9 at 1 and 5 minutes was also a well looking active female baby. She had a heart rate varying between 120-140 bpm and a normal systemic examination. A rash was noted over her trunk and abdomen comprising of 5-6 discrete maculopapular lesions. Her electrocardiogram, echocardiogram and thyroid functions were normal. A complete blood count showed Haemoglobin 21g/dL, White Cell Count 18/mL and a Platelet count of 73,000/mL at birth. Her platelet count dropped to 46,000/mL on day 2 which prompted initiation of oral prednisolonein a dose of 1mg/kg/day. On the 5th day of life her rash had totally disappeared and the platelet count was 150,000/mL. She was discharged on day 7 in a clinically well state. Her steroids were tapered over the following few weeks.
Both twins were investigated for neonatal lupus and workup turned out to be positive for Anti-SSA/Ro antibodies with titers 5-6 folds higher than normal and a positive 1+ speckled ANA in both twins. Other antibodies were negative (Table-1). 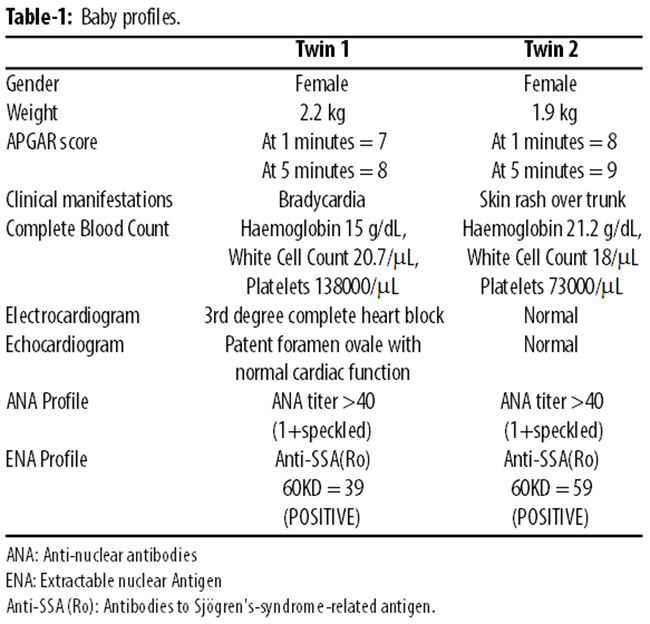 Mother was re-evaluated and found to have a sunlight aggravated butterfly rash for 1 year but no other clinical stigmata of the disease. Her antibody profile was positive for Anti-SSA/Ro antibodies with significantly high titers and a positive 2+ speckled ANA (Table-2). 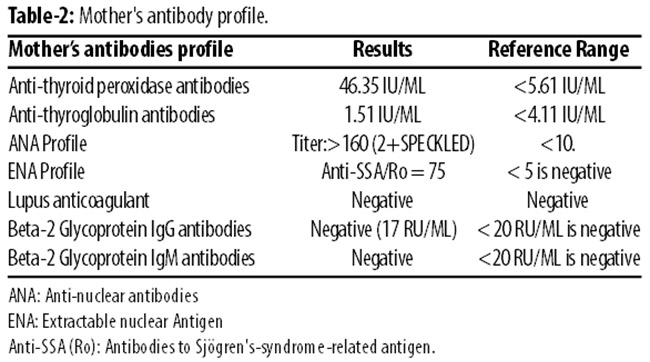 Neonatal lupus erythematosus is a rare autoimmune disorder with a diverse clinical spectrum of cardiac and non-cardiac manifestations seen in 1-2% foetuses and neonates resulting from trans-placental passage of anti-SSA/Ro (anti-Ro) or less commonly anti-SSB/La (anti-La) and anti-RNP autoantibodies.1,5 The overall incidence of NLE is 1:20000 live births and it is more prevalent in girls with a ratio of 3:1. Recurrence rate in subsequent pregnancies is as high as 25 %.1
Cardiac manifestations are common in NLE and predominantly include congenital heart blocks. Non-cardiac manifestations may include skin rashes, neutropenia, thrombocytopenia, Coomb\\\'s positive or micro-angiopathic haemolytic anaemia, hepatobilliary dysfunction leading to cholestasis, neurologic and pulmonary abnormalities. All manifestations except congenital heart block are reversible as the maternal antibody titers in the neonate decline a few months after birth.1,5
In patients with cardiac manifestations of NLE the incidence of complete heart block (CHB) is 50-60%, while associated congenital heart disease (CHD) is present in 30% of cases.4 Anti-SSA/Ro antibodies are positive in 90% of patients with CHB.1 Myocardial disease may manifest in 15-20% of cases and may even persist after insertion of a permanent pacemaker.3,5 Prenatal detection of CHB carries higher morbidity, mortality. Weekly foetal echocardiograms are recommended from 16-24 weeks.6
The overall mortality associated with CHB with other risk factors including structural defects is as high as 80%.5 In almost all cases with CHB whether diagnosed pre or post-nataly, permanent heart pacing is required either in infancy or later as it carries a mortality and morbidity of up to 30-40%.1 Babies with a structurally normal heart can have very favourable results if delivered in centers where pacemaker insertion is possible. A close echocardiographic monitoring is necessary especially during first 12 months due to high associated mortality.3
Non-cardiac manifestations of NLE are more common. Cutaneous manifestations contribute up to 15-25% with predominant facial involvement followed by trunk, scalp and neck. The rash which resembles adult sub-acute cutaneous lupus erythematosus may be desquamated or urticarial in nature. The rash is self-resolving with a mean duration of 15-17 weeks but it can complicate to scars or telangiectasia in 20% of cases. Use of steroids does not prevent these complications.7 Haematological manifestations like neutropenia or thrombocytopenia are commonly seen in 10-15% cases and may often be asymptomatic and temporary. Other non-cardiac manifestations like pulmonary, neurologic or hepatobilliary disease (HBD) are less common. HBD can present in isolation as a single clinical manifestation with elevation of liver enzymes or coagulopathy and there may be an associated cholestasis. Neurologic manifestation may include vasculopathies, white or grey matter changes and hydrocephalus.7
NLE does not present in all offspring of Anti-Ro and Anti-La autoantibody positive mothers in a uniform manner hence a wide spectrum of manifestations may be seen even in twins or triplets as in our case. This suggests that other contributing etiologic factors may have a role to play in the pathogenesis of the disease. The direct pathogenicity of maternal SS-A/Ro and SS-B/La is questionable since cardiac NLE occurs in only 2% of neonates born to mothers with these antibodies. Some authors have suggested other foeto-maternal factors including environmental, intrauterine or genetic influences may affect the pathogenesis and expression of NLE.2,5,8 The HLA sub typing in different cases have shown that infants of SS-A/Ro and SS-B/La positive mothers having HLA-A1, B8, DR3, DQ2, and DR52 are at increased risk of having NLE.9

We recommend a high index of suspicion in newborns presenting with NLE associated manifestations like CHB or thrombocytopenia. A right direction in investigations will lead to an early diagnosis not only for the newborn but also the mother. Our study also highlights the possibility of foeto-maternal, genetic and other factors influencing clinical manifestations in NLE in babies receiving the same level of antibodies. It is suggested that data from similar case studies may be used to plan an extended study looking into genetic factors including HLA molecules with a view to identify genetic risk factors for different clinical manifestations of NLE.

Disclaimer: None.
Conflict of Interest: None.
Funding Disclosure: None.

Pulmonary hypertensive crisis and its efficient management. A Case report and literature review