Treatment of chronic hepatitis C (HCV) is difficult in thalassemics due to the haemolytic side effects of therapy. This study evaluated the treatment response to conventional interferon and ribavirin in HCV patients with thalassemia major. It was conducted at PMRC Research Centre, Jinnah Postgraduate Medical Centre (JPMC) Karachi. At baseline complete blood count, liver function tests, serum protein/ albumin, random blood glucose, serum ferritin, TSH, HCV RNA (quantitative) and genotyping were done. Conventional interferon 3 MIU thrice weekly and ribavirin 400 mg daily was given for 24 or 48 weeks. HCV RNA was done at 1st month (RVR), 3rd month (EVR), 6th month (ETR) and six months post treatment sustained virological response (SVR). A total of 17 Anti HCV positive patients, age range 7-28 years were included.HCV RNA was found in 12. Treatment was completed in 8 patients. Genotype 3(87.5%) was found in 7 patients, 1 had genotype 1. RVR was achieved in 5 (62.5%) cases, negative PCR at 3 and 6 months of treatment (EVR) in 7 (87.5%) patients, one patient was non responder. SVR was achieved in 2(25%) patients. Anaemia was the most common side effect due to which transfusion requirements increased in 4(50%) patients.
Keywords: Chronic hepatitis C, Interferon, Thalassemia, Anaemia.

Beta Thalassemia is one of the most common genetic disorders in Pakistan with a carrier rate of about 5-7%.1 Iron chelation therapy and better management of blood transfusions has improved the survival of Thalassemia patients .However repeated transfusions make these patients prone to blood borne infections such as chronic hepatitis B and C. The overall prevalence of hepatitis C is 4.4-85.4%.2 whereas in Pakistan it is 49%.3
The standard treatment for chronic hepatitis C is pegylated interferon and ribavirin. However interferon monotherapy was used in Thalassemia patients and ribavirin was not recommended due to its haemolytic side effects.4 Alavian concluded that thalassemic patients with genotype 1 were likely to benefit from the addition of ribavirin.5 Kalantari et al compared the efficacy of conventional interferon monotherapy with combination therapy (interferon and ribavirin) and found that the response rate was better for patients given monotherapy.6 Recent studies show that thalassemics can be treated with combination therapy (interferon and ribavirin) with close monitoring, follow up and increased transfusion requirements.7,8 As in non thalassemics addition of ribavirin improves the response rate as well. Vafladis et al reported a response rate of 38% in treatment naïve thalassemics but this study included 44% genotype 1 patients.9 Another study shows a higher response rate in genotype 2 and 3 patients i.e. 66%.10 An Indian study shows a better SVR rate in patients on pegylated interferon and ribavirin (70%) as compared to pegylated interferon monotherapy (40%).11 Data from Pakistan regarding the treatment of these patients is scarce, which prompted us to conduct this study.

This was a pilot study conducted by PMRC Research Centre, JPMC in collaboration with Hussaini Blood Bank Karachi from the year 2012-2014. It included ten chronic hepatitis C positive thalassemia patients over seven years of age, haemoglobin > 9gm/dl, raised ALT > 1 to1.5 times the upper limit of normal on two separate occasions, HCV RNA (PCR) positive and serum ferritin levels less than 10,000 ng/l. Patients with signs of decompensation such as ascites, bleeding varices, hepatic encephalopathy, serum albumin less than 2.5 g/L or those with concurrent liver disease such as hepatitis B or HIV were excluded.
All patients were selected by the Hussaini blood bank where they were being treated and followed for thallassemia. Out of these those who were anti HCV positive by ELISA were referred to PMRC, JPMC for further clinical evaluation. After clinical evaluation, they underwent haematological (Complete blood picture), and biochemical tests (LFTs, Serum protein/ albumin, random blood glucose, serum ferritin and thyroid stimulating hormone (TSH) at PMRC. Only those fulfilling the inclusion criteria were further checked for HCV RNA (quantitative) and HCV genotyping at PMRC before starting treatment.
Selected patients were treated with a combination therapy of conventional interferon three million units thrice weekly subcutaneously along with capsule ribavirin 400 mg daily orally. Patients with genotype 2 or 3 were treated for 24 weeks while for genotype 1 or 4 therapy were given for 48 weeks.
Patients were counseled and trained on self administration of injections and informed about the possible side effects during the treatment. Follow up was done at PMRC every 2 weeks for the first month and then every month. At each follow up complete blood count was done along with clinical evaluation and side effects to therapy were noted. ALT levels were done every month and serum ferritin tested every three months. HCV RNA quantification was repeated at 1 month (4 weeks) to determine the rapid virological response (Normalization of ALT and undetectable or at least 2 log drop in the quantitative HCV RNA). PCR was done at 3months (12 weeks) and at 6 months (24 weeks) to see early virological response and end treatment response (Normal ALT plus a negative PCR).
HCV RNA, CP and ALT was repeated six months after the completion of therapy to assess sustained virological response (negative PCR and normalization of ALT six months after the completion of therapy). The haematological side effects of the treatment were managed by the haematologist at the Hussaini Blood Bank. The demographics and related investigations as mentioned above were entered in a proforma for documentation. Informed written consent was taken from each patient or their care givers. Ethical approval was obtained from the Medical Ethics review board of Jinnah Postgraduate Medical Center Karachi.
The data feeding and analysis was on computer package SPSS (Statistical Packages of Social Sciences) version 19.0.Clinical characteristics were summarized in terms of frequency and percentages for qualitative variables (gender, mother tongue, origin, longest stay, thalassemia diagnosed at what age, etc. Anti HCV, HCV RNA was done on start of treatment and end of treatment (to see the ETR), and follow-up at 6 months after end of treatment to see the SVR, mean S.D. for quantitative variables age, weight, height, BMI and laboratory investigations.
A total of 17 Anti HCV positive patients were included in the study with an age range of 7-28 years, (mean 17.4±5.04). Out of these 12 were HCV RNA positive. Interferon and ribavirin therapy could not be started in two patients as one had uncontrolled diabetes and the other patient had a haemoglobin of 8g/dl which could not be raised after 1 year of continuous management. Out of the 10 remaining patients, 1 patient (7 year old male with genotype 3) was lost to followup after 15 days whereas another patient (18 year old male with genotype 3) developed seizures after one month of combination therapy so treatment had to be stopped.
Treatment was completed in 8 patients, age range 12-20 years with a mean of 15.8±2.58. Two patients (25%) were under 15 years, six patients (75%) were over 15 years of age. Gender wise 5(62.5%) were males whereas there were 3(37.5%) females. Mean weight was 31.5±5.24kg and body mass index (BMI) was calculated to be 15.7±1.7. Baseline haemoglobin, WBC count, platelet count and serum ferritin is mentioned in the Table. Genotype 3(87.5%) was found in seven patients whereas one (12.5%) patient had genotype 1.
Treatment was completed in 8 patients, age ranged 12-20 years with a mean 15.8±2.58, Genotype 3(87.5%) was found in seven patients whereas one (12.5%) patient had genotype 1. The treatment response of these patients with respect to RVR, EVR and SVR is mentioned in Table. 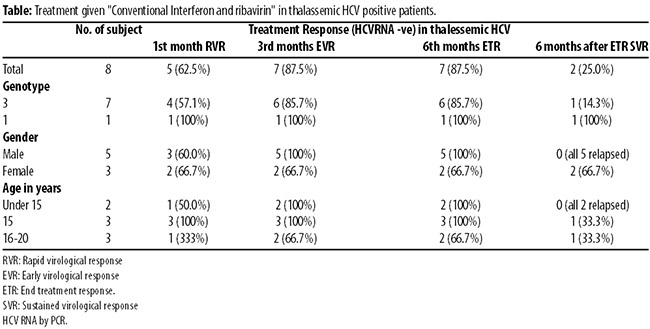 Anaemia was the most common side effect encountered during this treatment due to which transfusion requirements increased in 4(50%) patients. Ribavirin had to be stopped for a week in two patients during first month of treatment because Hb dropped to 6g/dl. Hb level dropped to 5g/dl in another patient during the second month so ribavirin was stopped for two weeks. All these patients had to be transfused with three units of packed cells on alternate days. Both interferon and ribavirin had to be stopped for two weeks in one patient during the fourth month as Hb dropped to 5g/dl. Ribavirin dose was reduced to half in one patient after restarting treatment. The same patient was transfused six times in the fifth month of therapy.

Sustained virological response with conventional interferon and ribavirin therapy is 25%. Anaemia is the most common side effect to be dealt with in these patients.

We would like to acknowledge PMRC for funding this project. Molecular and biochemistry laboratories of PMRC research centre, JPMC for their support.

Disclaimer: This abstract has not been previously presented or published in a conference.
Conflict of Interest: The authors have no conflict of interest to declare.

Sexual self-esteem in mothers of normal and mentally-retarded children