Effects of sevoflurane on female reproductive functions in Wistar rats

Along with the technological advancements in industry, chemicals are becoming an indispensable part of our daily lives. In contrast with the advantages that make life easier for human beings, chemical compounds may interfere with the organs or the systems of the body and lead to undesirable effects.
There are several chemicals in the environment that can have adverse effects on the human body. Many of these chemicals are integral factors in the production of substantial substances. Of the 87,000 chemicals registered for commerce in the United States (US), unfortunately only 10% of these compounds have been analysed for potential health effects.1 Of these, only a portion has been assessed for reproductive health effects. Inhalation anaesthetics are one of the subgroups of these substances which have been widely used in medical field. Various experimental and clinical studies showed that the routine use of inhalation anaesthetics may have nephrotoxic, hepatotoxic, neurotoxic and genotoxic effects.2-8 In contrast with the excessive amount of the data on toxicity, limited studies exist on the effects of volatile anaesthetics on the reproductive system.
Sevoflurane, which is a clear, non-flammable liquid at room temperature with no pungent odour and is well-suited for use in ambulatory anaesthesia, is a highly fluorinated substance named fluoromethyl hexafluoroisopropyl ether (C4H3F7O) that was first studied in humans in the US in the late 1970s.9 It has a low blood-gas partition coefficient of 0.69, providing faster balance on the alveolar concentration with the inspired (delivered) concentration that results in rapid induction of, and recovery from, anaesthesia. Although the main elimination occurs in the lungs, a 5% of administered dose of sevoflurane undergoes metabolism by the liver.10 Literature review revealed that there has been no data collected on the effects of sevoflurane on the female reproductive system.
The present study was planned to determine the effects of repeated exposure to sevoflurane on rat ovary tissue and reproductive hormones.

Of the 30 rats, there were 5(16.7%) in each group. All rats were anaesthetised after the 10th minute of exposure. No death or any complications occurred during the experimental exposure period.
After H&E staining, all ovarian tissues were analysed for the effects of sevoflurane on rat ovarian tissue pathology (Figure-1). 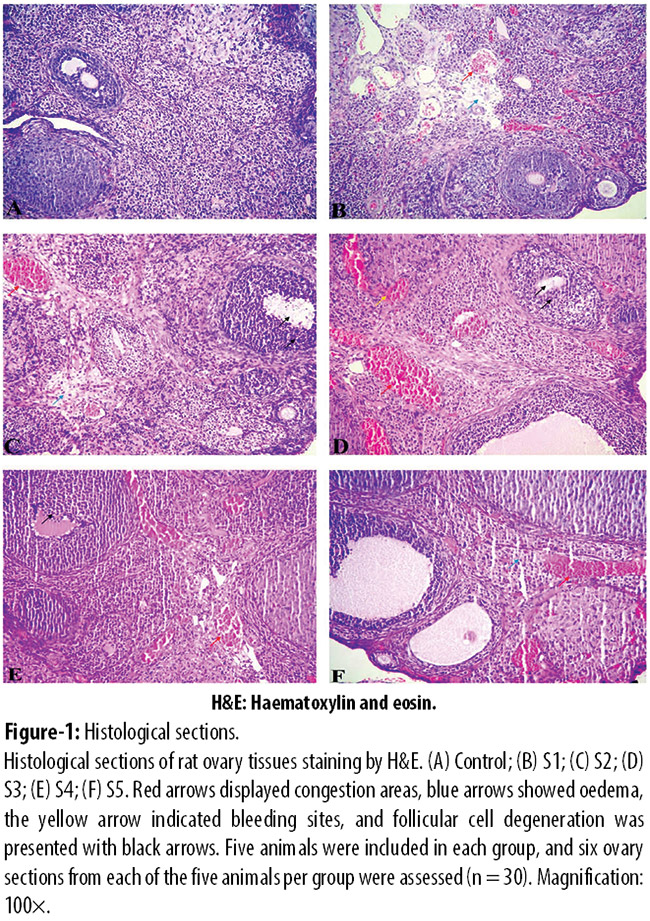 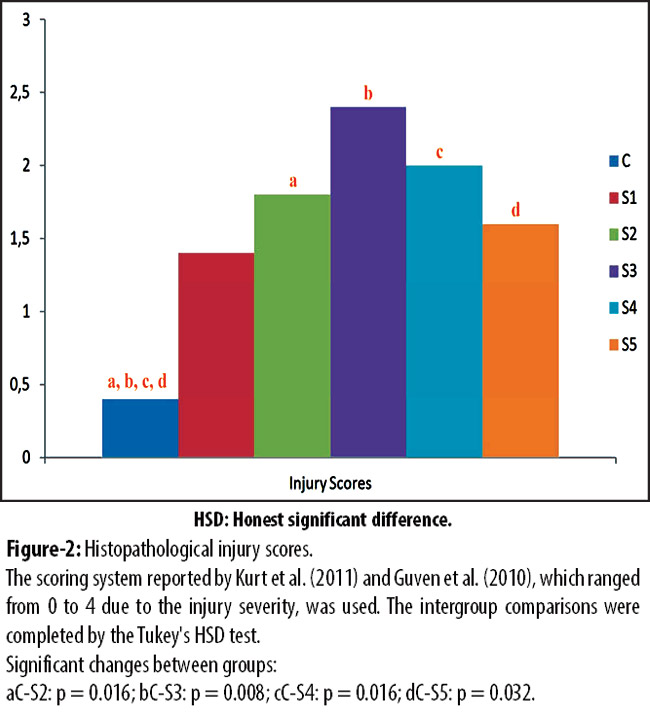 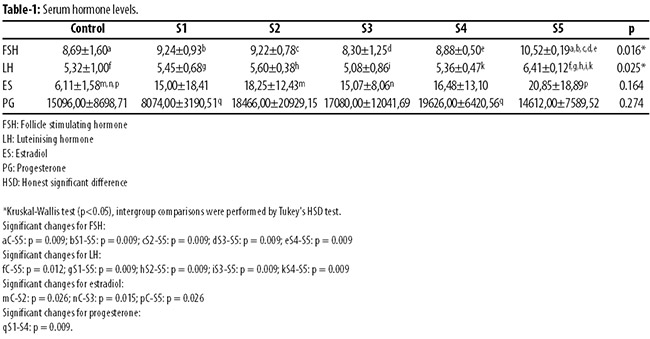 Acute and sub-chronic exposure to sevoflurane may negatively alter the hormonal regulation and histological structure of the female reproductive system. Through the current study, our understanding of inhalation anaesthetics has developed considerably; however, there is scarcity of useful clinical outcome data to guide this issue. Further studies are required to elucidate the exact mechanisms of the inhalation anaesthetics.

We are grateful to Erkut Somak, Yilmaz Ozcan and Serkan Kavak for their contribution to the study.

Disclaimer: None.
Conflict of Interest: None.
Source of Funding: The study was funded by Gaziosmanpasa University Scientific Research Projects Unit.