Twin abdominal pregnancy is rarely encountered by gynaecologists throughout their professional career. It poses a challenge in terms of diagnosis and management. This case report is about a patient who was diagnosed and successfully managed for this complication at a peripheral hospital of Pakistan Armed Forces.
Keywords: Pregnancy, Ectopic, Twin.

A 34-years of age, resident of Fatehjang, gravida 3 para 2 with both uneventful vaginal deliveries was booked in obstetrics and gynaecology (OB/GYN) out-patient department (OPD), PAC Hospital, Karma in January 2015. She was diagnosed with twin intrauterine pregnancy of 6 weeks duration on abdominal ultrasonography. She had remained a user of intrauterine contraceptive device (IUCD) for 3 years till 2013. There was history of twin pregnancy in her maternal grandmother. The patient was advised routine blood and urine investigations. Tablet Folic acid 5mg daily and, for vomiting, tablet Doxylamine Succinate was prescribed.
Her 2nd visit was five weeks later with complaints of mild vaginal bleeding and vague lower abdominal and rectal pain for last 15 days. It was followed by severe lower abdominal pain for last 10 hours. On admission, her pulse was 110bpm and blood pressure was 90/70mmHg. She was anxious and pale looking. Her lower abdomen was significantly tender. Bimanual vaginal examination was very painful with fullness in Pouch of Douglas (PoD). Mild bleeding was also noticed.
Ultrasonographic examination with both abdominal and vaginal probes revealed two dead foetuses with almost absent liquor and hugged up placental tissue. Uterus was empty. Almost 250ml-300ml of free fluid was also present. Ultrasonogram is not presented as the ultrasonography was performed in emergency where printer was not available. Provisional diagnosis of twin dead abdominal pregnancy was made and emergency laparotomy was planned. Her haemoglobin was 8.8g/dl and blood group was A rhesus positive. Sample was sent for urgent cross-matching for 4 units of blood. Informed and written consent was taken from husband of the patient for emergency laparotomy.
The patient was operated through lower transverse abdominal incision under general anaesthesia. The findings included partially disrupted placental tissue attached to the peritoneal surface of PoD, posterior aspect of left broad ligament and left pelvic wall. Two dead foetuses were present on the placental tissue as shown in Figure. 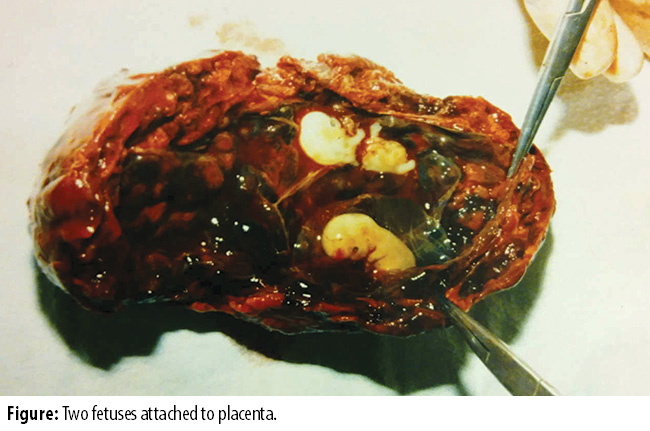 Uterus was deviated to the right side of pelvis and was soft in consistency. Left fallopian tube was swollen and oedematous at its fimbrial end but without active bleeding. Right fallopian tube and both ovaries were normal looking. About 400ml of clotted blood was also present. Placenta with both dead foetuses was removed. Placental tissue collectively measuring 3.5cm3 could not be removed because it was densely adherent to the peritoneum covering the rectum. Left salpingectomy was done. Haemostasis was secured, peritoneal lavage was done and abdomen was closed after placing drain. One unit of blood was transfused during surgery and the second unit, in intensive care unit (ICU) postoperatively. Serum Beta Human Chorionic Gonadotropin (b-HCG) level was sent from ICU to the laboratory on the day of operation. The recovery was smooth with haemoglobin levels of 10mg/dl on second postoperative day. The drain was removed on 4th day. Serum b-HCG was repeated on 7th post-operative day and found to be 75% reduced than the initial levels. The stitches were removed on 9th day. The consent of the couple was taken to publish the case and the patient was discharged.
The patient had regular follow-up visits to OPD for next 3 months. Vaginal bleeding stopped 21days after surgery and Serum b-HCG decreased to non-pregnant level (less than 5iu/l) in the same duration. No residual lesion could be detected on ultrasonographic examination after 6 weeks. Barrier method of contraception was advised to the couple. The couple was also briefed about almost 10% increased risk of having another ectopic pregnancy. Iron and multivitamin were prescribed to the patient for 3 months.

The incidence of ectopic pregnancy is 10 to 20 per 1000 pregnancies4 which has been tripled in last three decades owing to the increased use of contraceptive devices, tubal reanastromotic procedures and increasing application of artificial reproductive techniques.5 But luckily the maternal mortality secondary to the ectopic pregnancy has remained same because of its early detection techniques and better therapeutic options.
Abdominal pregnancy is a rare subtype of ectopic pregnancy where conceptus is implanted in the peritoneal cavity other than uterus, fallopian tubes, ovaries or uterine ligaments.6 It is subdivided in to two groups based on Studdiford Criteria;7 a) primary abdominal pregnancy characterized by, i) normal fallopian tubes and ovaries with no evidence of recent or past pregnancy, ii) no evidence of uteroperitoneal fistula, iii) The pregnancy exclusively related to peritoneal surfaces; b) secondary abdominal pregnancy in which there is evidence of tubal rupture or tubal abortion with secondary implantation. Another classification based on management options divides the abdominal pregnancy into early and advanced groups. Early abdominal pregnancy is <20 weeks in which the management is termination. Advanced abdominal pregnancy is >20 weeks in which foetus is growing and developing. In this group, selected patients can be managed in tertiary care hospitals conservatively as long as possible. In contrast to ectopic pregnancy, the incidence of abdominal pregnancy has remained constant 1:10000 live births. However, the maternal mortality has reduced from 20% to less than 8% due to modern diagnostic tools and treatment modalities.
Transvaginal ultrasonography is a key diagnostic tool for early diagnosis of ectopic as well as twin pregnancies. The reported sensitivity of preoperative ultrasound examination (including follow-up scans) is 87.0 - 99.0% with a specificity of 94.0 - 99.9% for ectopic pregnancy. When it is combined with serial b-HCG levels, the sensitivity of the tests increases. Other techniques include serial progesterone levels, dilation and curettage or manual vacuum aspiration for chorionic villi and diagnostic laparoscopy. Diagnosis of abdominal pregnancy is missed in 50% of the cases on initial ultrasonography. Magnetic resonance imaging (MRI) is extremely helpful in locating placenta and its adherence to any vital organ. Preoperative angiograms can be useful in locating vascular supply to placenta and to embolize these vessels in selective cases.
Twin abdominal pregnancy is mentioned in literature but exact incidence is not confirmed. In this patient, the use of IUCD was predisposing factor for ectopic pregnancy and her family history for twinning. Three hours travelling distance was a major obstacle in early reporting of the patient to the hospital after the appearance of symptoms. Moreover she had a visit to local general practitioner who attributed the symptoms to twinning with threatened miscarriage. The patient was successfully managed with surgery. Laparotomy findings suggested tubal abortion in this case. Haemoperitoneum was secondary to partial separation to placenta and same was the cause of foetal demise. Removal of whole placenta is neither always possible nor advised. If placenta is left, it can be observed for 4 to 8 weeks8 for spontaneous atrophy. Methotrexate is not recommended in the modern medicine except in very few cases because it accelerates the accumulation of necrotic tissue which may become infected.9 Laparoscopic surgery is another good option if the diagnosis of abdominal pregnancy is confirmed on early stage and if the expertise are available. Selective reduction of abdominal embryo is also being practised in In Vitro Fertilization (IVF) centres by injecting potassium chloride into the abdominal sac through vaginal route.10 The major complications such as continued haemorrhage, peritonitis and sepsis were not encountered.
Disclaimer: The work has never been previously presented or published in a conference, or published in an abstract book.
Conflict of Interest: None to declare.
Funding Disclosure: None to declare.

Extraoral approach of the surgical treatment of sublingual epidermoid cyst: A case report