Oculocutaneous albinism (OCA) is a pigmentary disorder of defective melanin biosynthesis pathway that is manifested by hypo-pigmentation of skin, hair and retinal pigment epithelium. The clinical features of OCA patients comprise of white milky skin, whitish to golden hair and deterioration of retinal cells. The ophthalmologic consequences in OCA patients usually include photophobia, nystagmus, low visual acuity, Rod and Cone cell deterioration, fovea hypoplasia and misrouting of the optic nerves at the chiasma.1 OCA is a genetically heterogeneous disorder, which mostly segregates in an autosomal recessive manner. Until now, seven genes (TYR, TYRP1, OCA2, SLC45A2, SLC24A2, C10ORF11 and MC1R) and an uncharacterized OCA5 locus have been mapped on the human genome.2 At molecular level, these OCA protein products are involved in melanin metabolism and transport. Epidemiologic studies of Europe and United States indicated that genetically caused OCA affects 1 in 17000 newborns, while this figure may be higher in Pakistani society where rate of consanguineous marriages are over 60 % among which the ratio of first cousin union is found in 80% of couples.3
Here in this study, we report on two recurrent mutations in TYR gene, in which c.346C>T is mapped first time in a Pakistani patient. Our study supports the evidence of mutational hotspots in TYR gene causing OCA in Pakistani patients.

In this presented investigative study, we ascertained four patients for mutation analysis of underlying gene defect causing oculocutaneous albinism. The study was approved by the ethical review board of Gomal Centre of Biochemistry and Biotechnology, Gomal University, D.I. Khan, Pakistan, and the samples were enrolled after obtaining informed written consent for clinico-genetic analysis and data publication. These patients were recruited from different rural parts of Pakistan. Ethnically, three patients (family A and C) were from Saraiki origin, while one patient from family B was Pukhtun by origin. The patients from family A and B were sampled in June 2013 while a single patient from family C was recruited in August 2014. The parents from both families A and B had second degree consanguinity, while the family guardians could not establish the exact degree of kinship in family C. The patients were presenting with non-syndromic form of oculocutaneous albinism. They had depigmented hairs, skin and iris along with reduced visual acuity, photophobia and exhibited continuous symptoms of nystagmus. The reduced pigmentation in the eyes was clearly evident from hazel green to light brown and bluish colouration of the iris but no symptom of heterochromia iridis was observed. The patients also showed progressive loss of vision due to retinal cells degeneration. The detail ophthalmologic examination did not reveal any abnormality of cornea and lens, except the presence of unilateral strabismus in patient from family C. In addition to the presented phenotype, no extra symptoms of biological, radiological or physiological abnormalities were found in any patient. Hence, the gross clinical analysis excluded the possibility of Hermansky-Pudlak, Chediak-Higashi, Waardenburg, Cross-McKusick-Breen, Griscelli syndromes and Elejalde syndromes. The additional clinical spectrum of OCA patients from all three families are presented in Table. 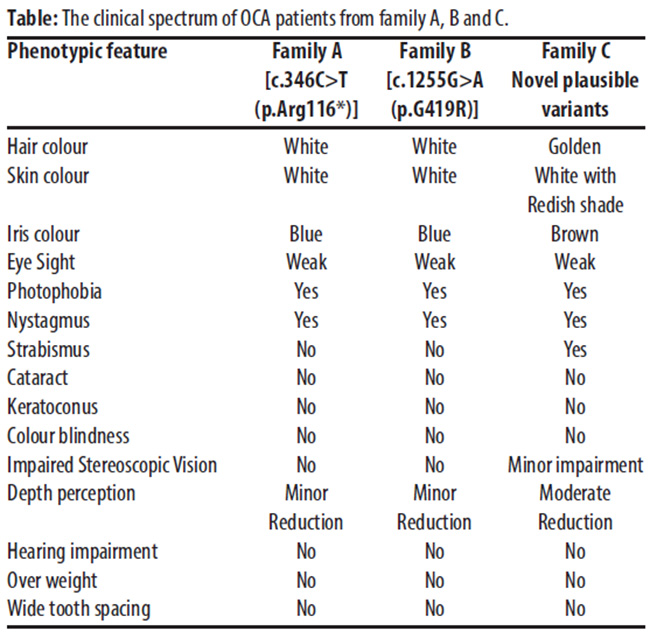 The molecular analysis through whole exome sequencing in two families (A and B) revealed recurrent mutations [c.346C>T (p.Arg116*) and c.1255G>A (p.Gly419Arg)] in the TYR gene. Sanger DNA sequencing confirmed the segregation of identified mutations in both families (A & B). Exome data analysis, for known genes implication in non-syndromic and syndromic OCA, did not show any pathogenic mutations in the third OCA family (C) (Figure). 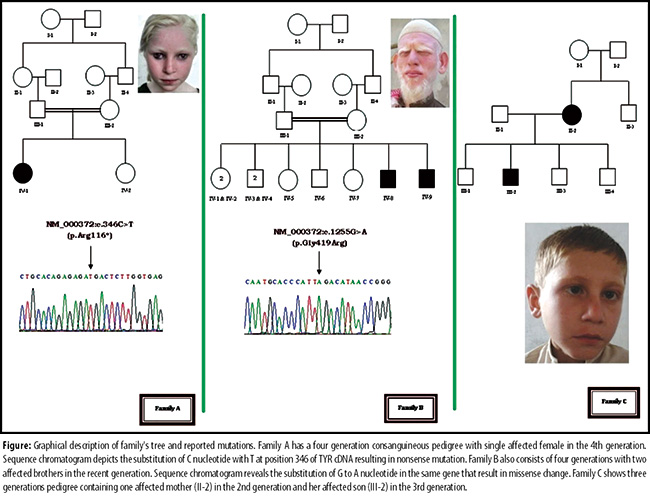 Exome variants analysis in OCA5 region also did not find any pathogenic alleles, which explain that some novel genetic factors were involved in family C causing OCA.

Albinism has an incidence rate of 1 in 20,000 individuals, in which OCA1 is the most commonly responsible locus world-wide.2 OCA1 phenotype is caused due to defective Tyrosinase (TYR) gene that is positioned on chromosome 11q14.3 The TYR gene consist of 5 exons which translate to produce the 529 amino acids long tyrosinase protein. Tyrosinase is an enzyme that catalyzes the initial two reactions in melanin biosynthesis mechanism in the pigmentary cells, called melanocytes. In its first step, the enzyme converts tyrosine amino acid into dihydroxy phenylalanine (DOPA) and then to DOPAquinone.1 Phenotypically, the TYR gene defect is categorized into OCA1A and OCA1B. OCA1A patients completely lack tyrosinase activity, while in OCA1B condition the enzyme shows reduced activity. Mutation studies have found 351 pathogenic mutations (HGMD Professional 2016.1 total) in TYR gene, in which more than 15 are reported in Pakistani families.3-5 Here, we are presenting the first report mapping c.346C>T (p.Arg116*) mutation in a Pukhtun origin Pakistani family, while p.Gly419Arg mutation has previously been reported in a Punjabi ethnic population and we mapped it in a Saraiki origin family. Genetic analysis of family C indicates the involvement of a novel genetic factor in OCA. Previously, several researchers have performed extensive genetic studies on large consanguineous Pakistani families and reported mutations in TYR, TYRP1, OCA2 and SLC45A2 genes.5-7 The TYR gene analyses in these studies have observed that p.Gly419Arg mutation has the most common incidence among Pakistani population.8-10 Recently, Shah and his colleagues have reported a founder mutation (p.Arg77Gln) in the TYR gene.7 The clinical data reported in these articles are almost consistent with our findings. The protein truncating mutation in family A has complete loss of function effect, which is evident from phenotypic features of patient IV-1 presenting with white hair, white skin and blue iris colouration. Our study increases the body of evidence that TYR is the most prevalent gene associated with OCA in Pakistani population.

Our study further extends the evidence of TYR gene mutations as genetic hotspots regions causing OCA in Pakistani families. Genetic screening of additional OCA cases may lead to the development of molecular diagnostic test and help in personalized healthcare. Moreover, homozygosity mapping through genome-wide SNP genotyping may help to identify a novel OCA gene in patient from family C.

The authors are grateful to all volunteer family members for their valuable participation in the present medico-genetic study.
Conflict of Interest: Declared none.
Disclaimer: Authors confirm and declare that the data has not been published in any journal nor been presented in any conference.
Funding Disclosure: None to declare.

Extraoral approach of the surgical treatment of sublingual epidermoid cyst: A case report