A comparative study of dynamic soft tissue mobilization vs. passive stretching technique to improve the flexibility of hamstrings in cricket players

Different therapies are available for correcting the tightness of hamstring muscles. Objective of this study was to compare the effectiveness of Dynamic Soft Tissue Mobilization DSTM technique and Passive Stretching PS to improve the flexibility of tight hamstrings in cricket players. A total of 120 cricket players having tightness of hamstrings were enrolled and randomized into two groups A and B using lottery method. Group-A was treated with DSTM and group-B with PS to improve the flexibility of hamstrings. Active Knee Extension Angle AKEA test was used to measure the hamstring tightness as it is a gold standard test for this purpose. The mean value of AKEA, pre-treatment score deficient to 180 degrees for DSTM was 25.66 ± 6.90, and that of PS was 25.46 ± 6.89, while the post-treatment score was 10.81 ± 4.30, and 18.63 ± 7.06 respectively. Post-treatment score for DSTM was statistically lower than PS. (p-value < 0.05). So it was concluded that it is better to use DSTM for acquiring better results.
Keywords: Flexibility, Passive Stretching, hamstrings, Knee extension angle.

Any decrease in the flexibility of hamstrings or tightness can cause hamstring injuries which are the most common type of injury among athletes and have a slow recovery rate, make health expenditures high and also decrease the performance level of the athlete. In contact sports the prevalence of hamstring tightness is very high.
Diana Hopper studied the effects of dynamic soft tissue mobilization in the treatment of muscle tightness and attaining muscle\\\'s normal length. It was found that subjects who received DSTM achieved significantly greater increases in hamstring flexibility than the control and classic STM groups.1 It is important to have the normal flexibility of hamstring muscles to move smoothly because the tightness of hamstrings can lead to various problems like Patellofemoral pain syndrome,2 and abnormal pelvic tilting especially in sitting. The lumbar curve is decreased in this position.3 A person with a disc protrusion or disc bulge, can have tight hamstrings4 and sciatic pain can also be associated with the disc herniation which may be due to hamstrings tightness.5 In Spondylolisthesis there are bilateral fractures in the pars interarticularis of the spine and severe tightness is present in hamstrings group.6 The injury or any tightness in these structures can be treated well if other associated factors are also adequately addressed and dealt with. These factors include training errors and improper warm up.7
For diagnosis of hamstring tightness different physical methods like knee extension angle (KEA), sacral angle (SA), straight leg raise (SLR), and sit and reach (SR) can be used but the gold standard is active knee extension angle test (AKEA).8 The angle of knee flexion represents hamstring tightness and can be measured with a goniometer after active knee extension with the hip stabilized at 90 degrees flexion while lying supine.9
Combining static stretching with spray technique, massage and dynamic stretching is an option. The treatment options used in this study were the DSTM and PS techniques. The DSTM was divided into hierarchical progressions and here the subject is in the prone lying position and few deep longitudinal strokes are applied to the entire muscle group and the area of tightness is located. When the specific area of tightness of hamstring muscle is located, the further treatment is limited to this target area. For dynamic intervention, the subject is in supine lying position with the knee and hip flexed to 90° and all the dynamic techniques are applied in a distal to proximal direction. Deep longitudinal strokes are applied to the area of hamstring tightness and the leg is passively moved to a position in which the hamstring is in lengthened position. Five strokes are applied to the area and shaking of the limb is performed for 20 seconds at the completion of this technique. Then the area of hamstring tightness is reassessed for reduction in muscle tightness.
If any improvement in the flexibility is indicated, then the next progressive dynamic technique is applied. However, if there is no reduction in the area of tightness, then treatment is stopped. The same sequence is applied for the next dynamic technique in which the subject is asked to actively extend his leg, so that reciprocal inhibition of the hamstrings can be achieved. In the final technique, the subject is asked to eccentrically work the hamstring muscle group to the end ROM and the therapist performs five deep distal to proximal longitudinal strokes over the area of muscle tightness at hamstrings1 (Figure). 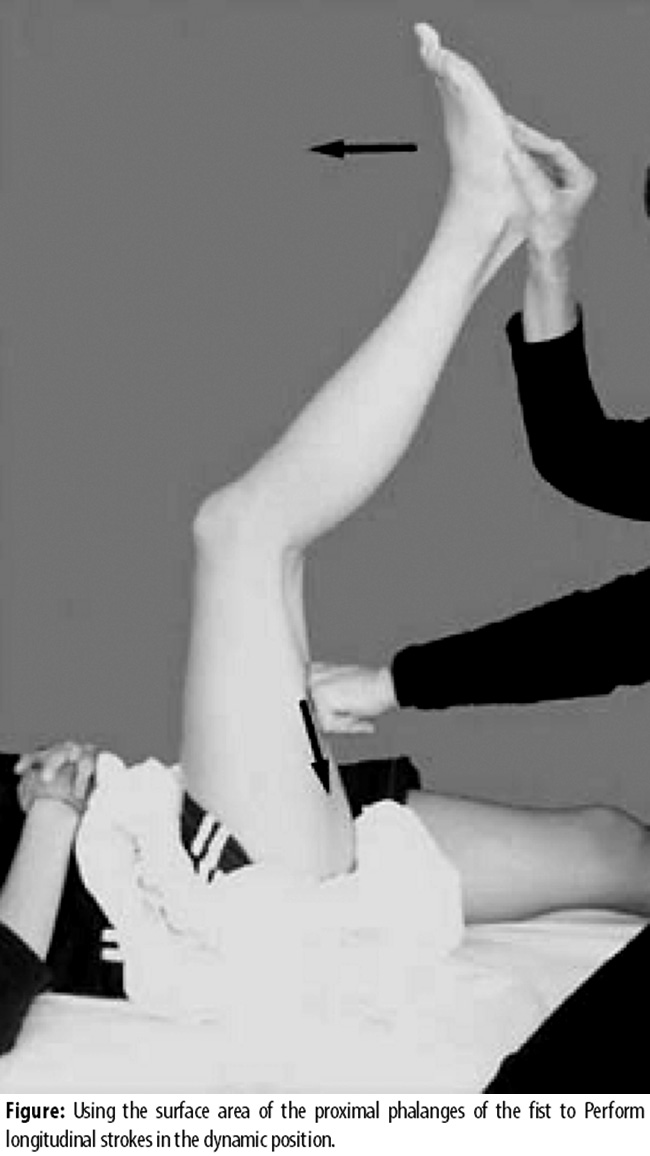 The aim of the study was to compare the effectiveness of Dynamic Soft Tissue Mobilization DSTM with Passive Stretching Technique to improve the flexibility of tight hamstrings in cricket players.

It can be concluded by the results of this study that both of the techniques are effective but dynamic soft tissue mobilization (DSTM) produces better results than PS to improve the hamstring flexibility in cricket players.
Due to limited time and resources we restricted the study to only the cricket players of one district of Pakistan. Further large scale research on different sports players should be carried out. Physical Therapists are recommended to use this technique DSTM for the players with tight hamstrings because there is no risk of injury and quick results are found. It is also less time consuming in a sense that all the work is done on a specific tight area of muscle.
Disclaimer: None.
Conflict of Interest: None.
Funding Sources: None.