Over a decade of changing trends in surgical mortality; audit from a tertiary care hospital

Objective: A retrospective audit of the trend of mortality in the general surgery service at our hospital over the last decade was conducted to reflect the complexity of cases being seen.
Methods: Mortalities of 8 separate years, a decade apart, namely 1997, 1998, 1999, and 2000 as initial years (Group-I) and 2011, 2012, 2013 and 2014 as recent years (Group-II) were reviewed.
Results: Total number of admissions in the service and surgeries performed during these two periods experienced an increase of 50.7% & 64.2 % respectively. The total mortalities showed an increase with 139 (mortality rate 0.96%) seen in Group I to 285 (mortality rate 1.31%) seen in Group II a percentage increase of 105%. Comparing the operative mortality, separately, mortality rate dropped from 1.21% to 1.16% of all surgeries. Analyzing non-operative mortality showed a significant increase from six deaths in Group-I comprising 4.3% to 76 non-operative deaths in Group-II corresponding to 26.7% (p=0.000).
Deaths due to Trauma increased from 12.9% to 25.3%, p=0.04, a reversed trend was seen in deaths due to GI Bleeding 11.5% to 3.2%, p=0.001.
Significantly more patients in Group-II had higher ASA levels as compared to Group-I (62% vs. 46%, p<0.005).
Conclusion: This study shows an increase in total mortality rate over the years, change was mainly due to an increase in non-operative mortality. Trauma became the predominant cause of death.
Keywords: Mortality, Quality of care, Surgery. (JPMA 67: 756; 2017).

Quality of care in patients, especially in surgery, has traditionally been measured in terms of the 5 "D"s i.e. death, disability, dissatisfaction, disease and discomfort. Among these variables, "death" or "mortality" has been an important indicator studied over the years.1,2
Mortality has been studied in terms of disease specific mortality, procedure specific mortality and more recently risk adjusted mortality. Alternatively mortality rates have also been studied to map changing trends and patterns of disease. These trends can help define areas that need focus, to improve quality of care.3,4
Over the last 25 years our institution has grown into a multi-disciplinary tertiary care facility. This period has seen increasing bed occupancy, an increasing patient turnover, an increase in the number and demand of high dependency and intensive care units and expansion of the emergency care services with nearly doubling of the bed capacity of the latter. The yearly inpatient and out-patient load at present is about 50,000 and 600,000 respectively. Approximately 60,000 patients are seen in the emergency department annually.
This change and growth has led to a prevailing perception among the surgical faculty that more sick and complex cases are now being managed and operated at our institution and that the patients being seen and managed today are different from what were seen a decade ago. It is important to study this changing trend in our part of the world, where resources are limited for better planning and allocation. To objectively record these changes and substantiate these perceptions ideally the whole data set should be reviewed, a massive undertaking; instead we have conducted a retrospective audit of inpatient mortalities in General Surgery of two periods a decade apart.

A weekly Morbidity and Mortality meeting in the section of General Surgery is the oldest and most consistent quality of care activity in the institution, occurring regularly since the inception of the department. All inpatient mortalities within 30 days of admission, as identified by the health information management services, are presented at this forum irrespective of intervention. For presentation the resident involved fills out a Mortality record form and the primary attending physician adds his comments. At the end of discussion an attending surgeon not involved in the care process summarizes the discussion on the form. The forms are saved in our department records.
A retrospective audit was performed at Aga Khan University Hospital, Karachi. Application for exemption was applied to the ethical review committee of the hospital which was accepted (3498-sur-erc-15).
We reviewed Mortality forms generated over an eight year period, dividing them into two groups of 4 years each separated by a 10 year gap. Group-I included years 1997, 1998, 1999 and 2000, whereas Group-II included years 2011, 2012, 2013 and 2014
Variables recorded from the forms were gender, age, admission status (elective, emergency, transfer from other facility, etc.) length of hospital stay, pre-operative diagnosis, surgical procedure and its status (elective, emergency), co-morbidities and malignancy, ASA level and cause of death.
Total number of admissions and surgeries performed during these years were obtained from Health Information Management Services.
Continuous variables were expressed as means and standard deviations whereas categorical variables were expressed as frequency and proportions. Variables between the two groups were compared with Student\\\'s t test for continuous and chi-square test for categorical variables. SPSS version 19 was used for Data entry and Analysis.

An overall growth in the number of admissions, surgeries and mortalities was seen. During the duration of the study period the overall strength of the General Surgery faculty stayed about the same, as shown in Table-1. 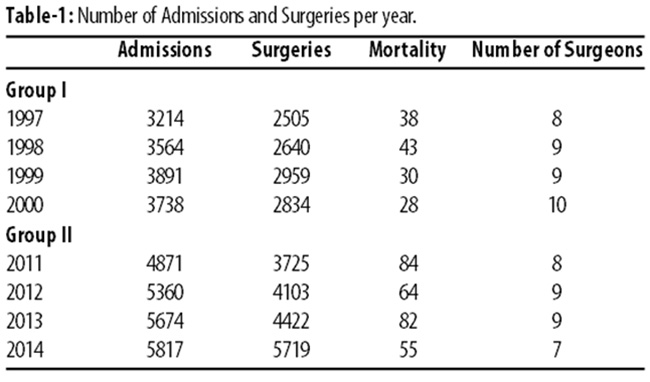 Total admissions and surgeries in the general surgery service experienced an increase from 14407 admissions and 10938 surgeries in Group I (years 1997 to 2000) to 21722 admissions and 17969 surgeries in Group II(years 2011 to 2014) representing a 50.7% and 64.2 % increase respectively over this 10-year period, as shown in Table-1.
The total mortalities showed an increase with 139 seen in Group I to 285 seen in Group II, a percentage increase of 105%. This translated to a mortality rate increase from 0.96% to 1.31% of all admission in General Surgery. Comparing the operative mortality i.e. within 30 days of admission, between the two periods separately, a decrease in rate was observed; mortality rate dropped from 1.21% to 1.16% of all surgeries.
Mortalities in both Groups were comparable in terms of age (Group I = 51.9 ± 16.5 and Group II= 52.8 ± 17.8 years respectively, p=0.61) gender distribution (Group I = 66.2% males and Group = II 70.2% males respectively, p=0.43) and presence of co-morbid conditions (Group I = 67.6% and Group II = 69.5% respectively, p=0.73).
Route of admission was comparable between the mortalities of both the groups, with admission from the emergency department being the most common route, followed by elective admission and transfers from other hospitals or transfers from services within hospital, as shown in Table-2. 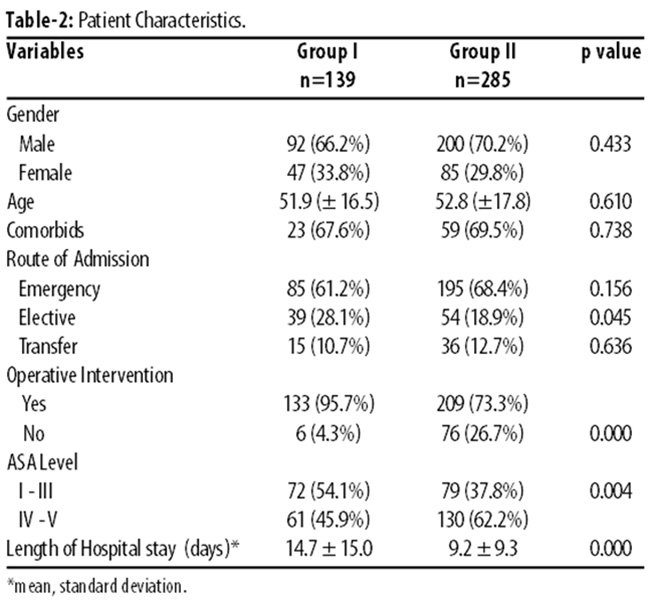 Group II had significantly more, higher ASA level (IV or V) patients as compared to Group I (Group I = 45.9% and Group II = 62.2%, p=0.004). There was a statistically significant decrease in the mean length of hospital stay for the mortalities, from 14.7±15 days in Group I to 9.2±8.7 days in Group II (p=0.001).The median length of stay was 7 days in Group II showing that approximately half the mortalities occurred within one week of admission and when seen at 72 hours nearly 32.6% mortalities occurred within the first 3 days of admission. When the operative mortality was analyzed separately, most surgeries were done under emergency circumstances in both the groups showing no significant change in proportions (Group I = 70.7% and Group II = 82.8% respectively, p=0.01) as shown in Table-2.
The five leading diagnoses associated with overall mortality in Group I were malignancy (20.1%), Trauma (13.7%), perforated viscus (12.9%) soft tissue infections (12.2%) and GI bleeds (11.5%). In Group II the highest proportion was due to trauma at 25.3%, followed by perforated viscus (14.7%), malignancy (11.1%), soft tissue infections (9.5%) and pancreatitis (9.1%).Between the years, a significant increase in the proportion of deaths with trauma was recorded. Increase in mortality trends due to perforated viscus, pancreatitis and bowel obstruction were also seen along with a significant decrease in the proportion of deaths by GI bleeds. Decreasing mortality trends were observed due to malignancy and soft tissue infections as well, however these trends did not achieve statistical significance when analyzed using the Chi square test as shown in Table-3. 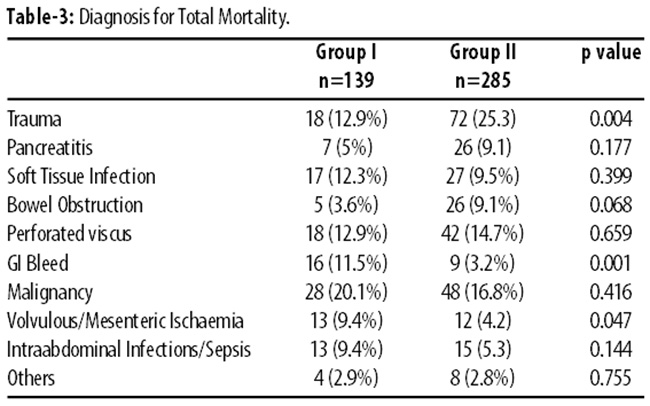 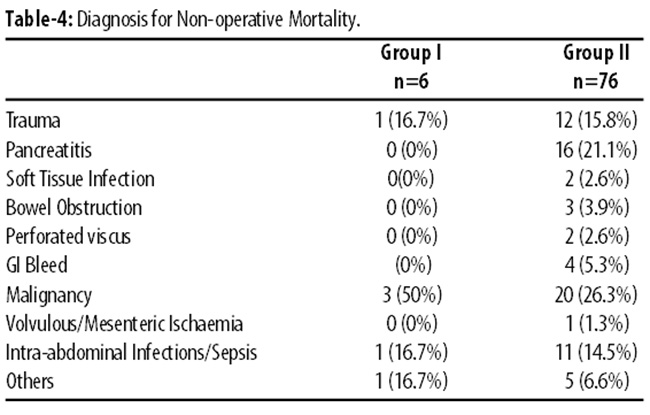 The mode of death primarily was severity of primary disease in both the years with minor contributions from cardiopulmonary complications, nosocomial infections and technical events, as shown in Table-5.

To correctly determine whether the patients presenting to our institute have become more complex and sick would require an analysis of risk adjusted mortalities. Calculation of Co-morbidity indices or scores e.g. APACHE-II would be needed to supplement such an analysis. Collection of such data would require a dedicated registry and the limited resources in our part of the world pose a great hindrance to such efforts. Nevertheless our study showed a significant increase in mortality rate over the last decade. If we presume that the quality of care has remained more or less unchanged during this period, this finding indirectly reflects that a more critically ill group of patients is being managed at our hospital, thus resulting in an increased mortality rate. This is also evident indirectly from the fact that number of patients with higher ASA levels (IV or V) has significantly increased over these years.
The length of hospital stay before expiry showed a significant reduction which may also be attributed to the sick patients who die early due to the severity of the primary disease process. The fact that a third of the mortalities in Group II occurred within 3 days of admission strongly supports the claim that this patient population is more sick at presentation.
In Group II an increased proportion of deaths by trauma was observed which can be attributed to the increase in violence in our society5 along with a rising frequency of road traffic accidents.6 When analyzed in light of the reduced length of hospital stay, it may also indicate a paucity of pre-hospital care services with many trauma patients presenting late and under resuscitated. The male predominance in overall mortality may also be explained by the finding that most deaths secondary to trauma were suffered by males. Similar gender discordance has been reported by Chukuezi et al.3
We observed a significant increase in the non-operative mortality (Table-4). This subset comprised mainly of patients diagnosed with malignancy, pancreatitis and trauma. Patients with advanced malignancies either previously operated upon by a general surgeon or with metastatic intra-abdominal sequelae are admitted in the general surgery service for palliation. This we feel is due to the lack of dedicated palliative services in our region.7 Similarly the treatment of pancreatitis has seen a paradigm shift towards a conservative and non-operative or step up approach with a smaller proportion needing operative intervention.8 The general surgery team forms the core of the trauma team at our hospital, poly-trauma patients are initially admitted under general surgery. A proportion of these succumb to their injuries which are often not of general surgical nature.
Our study revealed a reduction in mortality from GI bleeding, this is attributable to the shift in management, with most GI bleeds now managed endoscopically by the Gastroenterology service or vascular interventional radiology.9
Mortality from soft tissue infections and malignancy showed a reduction but it did not achieve statistical significance (Table-3).
The primary mode of death observed in our study was the severity of the presenting disease process. This may be secondary to delay in recognition of the problems or inadequate primary treatment provided. In the acute illness, specially trauma situations, the paucity of pre-hospital care resources adds further to the problems due to inadequate resuscitation and treatment provided to these patients, during the shifting process10 a large proportion of patients with trauma are brought late and under resuscitated to hospital.11,12
In conclusion, our data being from a single center with limited number of cases may not be suitable for drawing population based inferences. Nevertheless our study has highlighted important trends in surgical mortalities over the last decade. We recommend that efforts should be focused on developing population based registries in our part of the world to better study patterns of surgical disease and mortality. This will help in developing strategies to be better prepared for the challenges posed by surgical disease in our part of the World.
Conflict of Interest Statement: The authors have NO affiliations with or involvement in any organization or entity with any financial interest (such as honoraria; educational grants; participation in speakers\\\' bureaus; membership, employment, consultancies, stock ownership, or other equity interest; and expert testimony or patent-licensing arrangements), or non-financial interest(such as personal or professional relationships, affiliations, knowledge or beliefs) in the subject matter or materials discussed in this manuscript.
Disclaimer: None.
Funding Support: None.