Objective: To study visual outcome in patients of high altitude retinopathy presenting with retinal venous occlusion.
Methods: The randomised clinical trial study was conducted at the Armed Forces Institute of Ophthalmology, Rawalpindi, Pakistan, from January 2013 to December 2015, and comprised eyes of lowlanders. Patients staying at high altitude (>8,000 feet above sea level) as part of their service duty and presented with retinal venous occlusive disease were included. Patients with history of diabetes, hypertension, glaucoma, any pre-existing retinal disease or age-related conditions responsible for decreased vision were excluded. Detailed ocular as well as systemic examination was carried out to establish the diagnosis of retinal venous occlusion. Patients were divided into two groups. First group was observed over a period of 6 months and labelled as control group, whereas the second group was treated with intravitrealbevacizumab and labelled as intervention group. Complete ocular examination was carried out in all patients at 4 weeks, 3 months and 6 months. SPSS 21 was used for data analysis.
Results: A series of 32 eyes of 28 male patients were included. The overall mean age was 31.40±3.40 years. The mean altitude of their temporary stay was 4,120±941 metres above sea level and the mean duration of stay was 6.80±4.13months. Besides, 21(75%) subjects were smokers. Moreover, 26(81.25%) eyes had central retinal vein occlusion while branch retinal vein occlusion was seen in 6(18.75%) eyes. The mean visual acuity in the control group was 0.70±0.56 on Logarithm of the Minimum Angle of Resolution chart at the presentation while it was 0.26±0.87, 0.20±0.32 and 0.15±0.23 after 4 weeks, 3 months and 6 months, respectively. The mean best corrected visual acuity in intervention group was 0.68 ± 0.46 before treatment and 0.15±0.11, 0.12±0.11 and 0.10±0.08 at 4 weeks, 3 months and 6 months, respectively. Significant post-intervention change was observed in best corrected visual acuity at 6 months (p<0.05) in patients who presented with severe visual loss.
Conclusion: Treatment with intravitrealbevacizumab may be considered in patients with severe visual loss at presentation.
Keywords: High-altitude haemorrhages, High-altitude illnesses, High-altitude retinopathy, Retinal vein occlusion. (JPMA 67: 735; 2017)

High-altitude illnesses are a group of medical disorders that is associated with prolonged stay at high altitude. Main mechanism behind these disorders is proposed to be secondary polycythaemia, dehydration, lack of activity, and compact/tight dressing which predispose to thromboembolic phenomenon.1 Four main clinical manifestations of high altitude illnesses are acute mountain sickness (AMS), high-altitude retinopathy (HAR), high-altitude cerebral oedema (HACE) and high-altitude pulmonary oedema (HAPE).2
Extreme weather conditions along with physical and psychological strain are few of the known contributory factors for high-altitude illnesses.2-4 Visual symptoms are observed if macular area is involved. Effect of physical inactivity and lack of acclimatisation on high-altitude illnesses have been thoroughly mentioned in various studies and they appear to be important risk factors.5
HAR is a common high-altitude illness, which is clinically characterised by increased dilatation and tortuosity of retinal vasculature along with diffuse dot blot and flame shaped haemorrhages, usually involving mid-periphery. Cotton wool spots, vitreous haemorrhages and papilloedema may occasionally be seen.6-8 Although age, hypertension, hyperlipidaemia, diabetes mellitus, oral contraceptive pills, raised intraocular pressure and smoking are important risk factors in the development of HAR, authors have also highlighted the role of raised serum homocysteine levels, protein C and factor V Leiden mutation in the pathogenesis of HAR and retinal venous occlusion (RVO).9,10 Most of the manifestations of HAR resolve spontaneously after descent, but HAR-associated RVO may lead to variable visual outcome ranging from complete recovery to permanent visual loss.1,11 The current management protocol for retinal vein occlusion include intravitreal anti-vascular endothelial growth factor(VEGF) agents, intravitreal triamcinolone and laser photocoagulation.12
The current study was planned to compare the effects of intervention and observation on visual outcome in patients of retinal vein occlusion.

This randomised clinical trial was conducted at the Armed Forces Institute of Ophthalmology, Rawalpindi, Pakistan, from January 2013 to December 2015, and comprised eyes of patients of retinal venous occlusion associated with HAR. The Armed Forces Institute of Ophthalmology is a tertiary care hospital that caters to patients referred from most of northern and north-western mountainous parts of the country. All patients were lowlanders and were temporarily staying at high altitude (more than 8,000 feet above sea level). Patients with history of diabetes, hypertension, glaucoma or any pre-existing retinal disease were excluded. All the patients were admitted to indoor hospital facility. Systemic examination was carried out including vital signs, cardiovascular, respiratory and nervous systems examination by physician. Detailed ocular examination was carried out including best corrected visual acuity (BCVA), pupil examination, slit lamp anterior segment examination, intraocular pressure measurement and indirect ophthalmoscopy. The clinical diagnosis of HAR-associated RVO was established by consultant ophthalmologist based on the clinical findings and typical history of deterioration of vision while serving at high altitude. Patients were randomly segregated in observation and treatment groups. Optical coherence tomography (OCT) of macula and fundus fluorescein angiography (FA) were carried out for documentation of the clinical findings and assessment of macular oedema. Systemic investigations such as complete blood counts, erythrocyte sedimentation rate (ESR), electrocardiography (ECG), plasma glucose levels, lipid profile, renal function tests, thyroid function tests, thrombophilia profile, homocysteine levels, antiphospholipid antibodies, rheumatoid arthritis (RA) factor, antineutrophil antibody (ANA), antineutrophil cytoplasmic antibody (ANCA) and anti double stranded deoxyribonucleic acid (dsDNA) antibodies were carried out to find out systemic association of RVO. All the patients were counselled about the prognosis of disease and available treatment options, including the possibility of observation. Informed written consent was taken from all patients. Management protocol was discussed with hospital ethical committee and study was started after their approval. Treatment included monthly intravitrealbevacizumab (IVB) injections of 1.25mg for 03 months. All patients were examined monthly for 06 months. Ultra-wide field fluorescein angiography (UWFA) and targeted photocoagulation to peripheral ischaemic areas was done if fundus haemorrhages persisted for more than three months.
SPSS 21 was used for statistical analysis. The continuous data such as age and visual acuity was described in terms of mean ± standard deviation (SD). Paired test, independent t-test and Mann-Whitney U test were performed for statistical analysis. P<0.05 was considered significant. 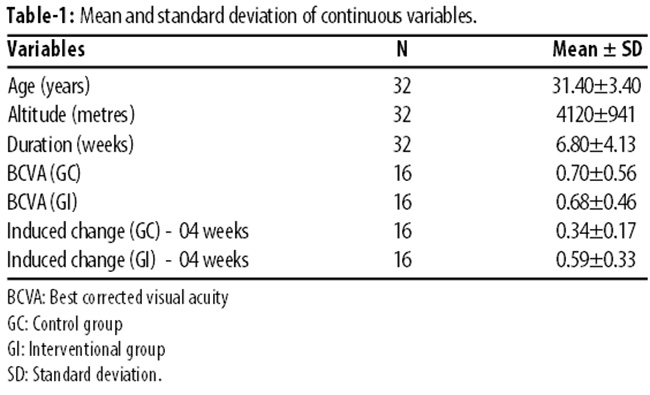 Graphical representation of mean change in BCVA and CMT in both groups with respect to severe and low-moderate vision at presentation is also shown (Figure). 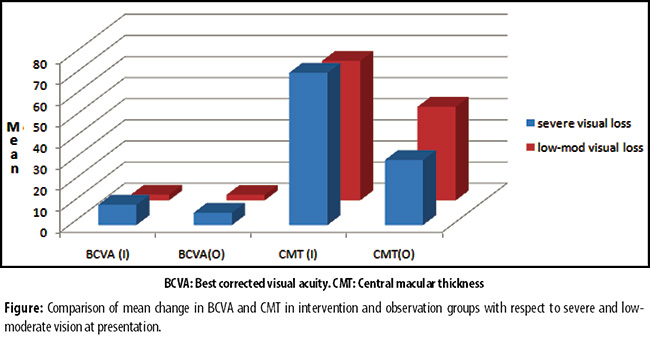 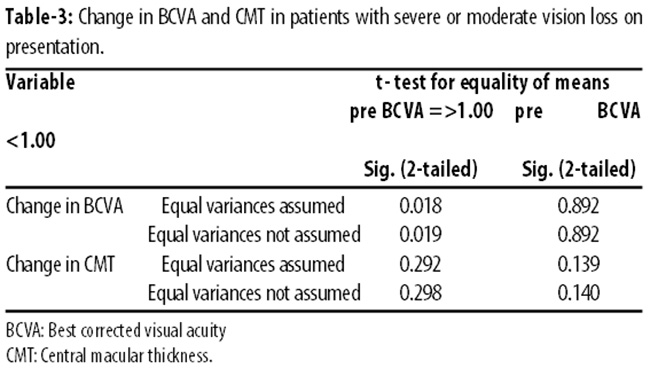 Relationship between height and duration of stay in pathogenesis of HAR has been mentioned in various studies, however, the exact reason for occurance of venous occlusive disease in patients living at high altitude has not been clearly defined so far. Tilleul J. et al. in their study proposed that some nocturnal factors may also play an important role in the pathogenesis as two-thirds of their patients who were suffering from HAR developed symptoms overnight.13,14 The prevelance of HAR and its relation with HAPE, HACE and AMS has been studied vastly.Recently, Arora et al. found retinal haemorrhages to be the most common problem in high altitude subjects (58%) while the incidence of retinal vein occlusion was only 13%.15
High altitude retinal haemorrhages are more common in young age.16 Various theories exist about the pathogenesis of HAR. Auto regulation of retinal blood circulation in response to hypoxia, increase intravenous pressure secondary to intracranial pressure, coughing or strainings and variation in haematocrit levels has been described as some of the factors.17 Dehydration and inactivity at such extreme altitude are also important factors for thrombosis. Hypoxic stress also increase plasma fibrinogen and fibrinolysis resulting in thrombous formation. Secondary polycythemia and raised blood viscosity are independent risk factors with a higher incidence of thrombotic rather than haemorrhagic stroke at high altitudes.17,18 In our study, CRVO was seen in 81.25% eyes while BRVO was present in 18.75% cases. Out of six BRVO patients, one was of multiple BRVO. The asymptomatic other eye of the patients also revealed few scattered haemorrhages and venous changes like dilatation and tortuosity in most of the patients.
Various authors, such as Anand A. et al. and Rosso A. et al., reported that vascular pathologies are common at or above 4,000 metres above sea level and most of the time they resolve spontaneously without a visual sequelae.1,11,18-20 Although most of our patients were living at a mean height of 5,120±941 metres above sea level, the duration of stay varied significantly among them with a mean duration of 6.80±4.13 months. Smoking, which is a known risk factor for venous occlusive disease, was positive in 75% of our patients. Other systemic investigations to search for systemic associations were carried out. They neither revealed any significant results nor was it the scope of our study. We found that no such study has been carried out in our population which recommends or compares benefit of early treatment versus observation in patients of RVO associated with high altitude.
Comparing the observation versus intervention groups, we found a statistically significant change in the mean BCVA and CMT in both groups at 6 months. Patients who were treated with IVB had better visual outcome at 04 weeks; however, at 03 months and 06 months the BCVA was comparable in both the groups. It was observed that all those patients who had severe visual loss at presentation (pre-BCVA= >1.00) benefit with IVB and had better visual outcome (p<0.05) at 06 months than those who were only observed.
The limitations of our study were that we could only report those cases that developed visually significant retinal pathologies and referred from primary health care facility. Therefore, all those patients who had visually insignificant retinal haemorrhages could not be recognised and resultantly our sample size was small. Although we believe our finding is important, the role of intervention, especially in patients with severe loss at presentation, needs to be further evaluated and more comprehensive studies for a longer duration and larger cohort are required to be carried out. The primary mechanism responsible for this clinical presentation and the preventive measures that can be taken to avoid its occurrence were not the scope of this study and have yet to be explored.

Although HARs resolve spontaneously in many cases, treatment with IVB may be considered in patients with severe visual loss at presentation.

We are grateful to Prof. Dr Muhammad Alamgir Khan of the Physiology Department of Army Medical College, Rawalpindi, for his supervision and guidance in statistical analysis of the data.
Disclaimer: None.
Conflict of Interest: None.
Source of Funding: None.