The study was conducted from February to June, 2014, at the Government College (GC) University, Lahore, Pakistan, and comprised schoolchildren and children with conversion disorder. In order to elicit symptoms, DSM-V criteria of conversion disorder was consulted and seven practising mental health professionals including four clinical psychologists, two psychiatrists and one neurologist were interviewed by using semi-structured interviews. Mental health professionals with at least three years of experience in child psychiatry were included in the sample for interview.
In order to generate items for revised version of CDS, seven practising mental health professionals were interviewed and were asked to report items on the basis of their clinical experience. At the end of this phase, all the items identified by experts were reviewed by two senior researchers and a list of 42 items was finalised for expert ratings after excluding overlapping items.
During this phase, the list of 42 items was given to experts for empirical validation. In order to get ratings from experts, seven practising clinical psychologists were selected who rated each symptom on the basis of degree to which it reflects conversion symptoms. Clinical psychologists having three years of experience in child psychiatry were selected as experts. Experts were provided with instructions to rate the list of items on the basis of degree to which each symptom is characteristic of conversion disorder in the Pakistani society. They were asked to rate these items on a four-point rating scale from 0 to 3 where 0 means that symptom is not representative of conversion disorder, 1= a little bit representative, 2= somewhat representative, and 3= representative of conversion disorder most of the time. After getting expert ratings, a league table of items was developed representing the degree of agreement among experts on each item. Items with 70% or above percentage of agreement were retained. After eliminating low-rating items, a list of 40 items was retained, which were transformed into three-point rating scale, i.e. 0 = not at all, 1= sometimes and 2= most of the time.
This phase of research was conducted to establish the psychometric properties of revised CDS version (CDS-R). The sample for the study consisted of children school children as the control group and children with conversion disorder as the clinical group.
Simple random sampling was used to get data from the schoolchildren. One boys\\\' school and one girls\\\' school was selected for data collection. Students of grade 6th, 7th, 8th and 9th were included in the study. Purposive sampling was used with conversion patients. Only those patients who were diagnosed by the clinical psychologist of the hospital according to the DSMV criteria were included.
The Children Somatisation Inventory (CSI) was developed and revised in 2009.11 The revised version of CSI consists of 24 self-reported items which measure the extent to which a child has experienced these symptoms in the preceding two weeks. The items are rated on a five-point rating scale, with 0 = not at all, 1 = a little, 2 = some, 3 = a lot, and 4 = a whole lot. The Cronbach\\\'s alpha of English version of CSI was a = 0.85 and that of Urdu version was a = 0.83 which showed Urdu version is reliable in Pakistani culture.
CDS is an indigenous scale10 for screening conversion disorder in children in Pakistani culture. The scale consisted of 19 items. CDS-R consisted of 40 items and these items were rated on a three-point rating scale, i.e. 0 = not at all, 1 = sometimes and 2 = most of the time.
In order to get data from hospitals, permissions were taken from concerned authorities. Participants were then approached for data collection. Informed consent was taken from parents or elder siblings of children. In addition, the purpose of the present research was fully explained to participants. The scale was individually administered on participants. In order to find discriminant validity, Urdu versions of CSI-24 and CDS-R were administered on the schoolchildren after getting permission from administration of government higher secondary schools for boys and girls. Students from classes 6th, 7th, 8th and 9th were selected through random selection. It was a group administration. Consent was taken from students and they were ensured about confidentiality of provided information.

There were 240 children in the study, including 120(50%) schoolchildren and 120(50%) children with conversion disorder. Of the schoolchildren, 60(50%) were boys and 60(50%) were girls. The mean age in the clinical group was 13.25±2.47 years and in the control group it was 13.15±1.38 years.
In order to explore the factorial structure of CDS-R, exploratory factor analysis, principal component method with varimax rotation was used. The criteria to retain factors were scree plot, eigen value of > 1 and factor loading of >0.40. The scree plot revealed five factors for CDS-R. At the end, five factors solution was retained as it gives a clear distinction of items.
Five factors among the total 40 items were identified. All 40 items were retained on five-factor loading. The 1st factor \\\'swallowing and speech symptoms\\\' consisted of 10(25%) items and had highest amount of variance. This was followed by 2nd factor \\\'motor symptoms\\\' that included 9(22.5%) items. Factor 3 \\\'sensory symptoms\\\' and factor 4 \\\'weakness and fatigue\\\' consisted of 8(20%) items each while the 5th factor \\\'mixed symptoms\\\' comprised 5(12.5%) items in total. Eigen value of all the five factors was more than 1 which implies a high degree of variance in the scale.
Cronbach\\\'s alpha of total score of CDS-R and its five subscales were calculated. It was found that reliability of all five factors was in the range of 0.61 to 0.85 which was significantly high. The reliability of total score of CDS-R was 0.91 which was also significantly high. The high alpha reliability of CDS-R shows that scale was highly internally consistent.
In order to find concurrent validity of CDS-R, Urdu version of a standardised scale of somatisation, i.e. CSI-24,11 was used. The correlation between two scales was found to be 0.81 which was significantly high.
The discriminant validity of CDS-R was calculated by comparing control and clinical groups. Independent sample t-test was used for comparing scores of both groups (Table-1). 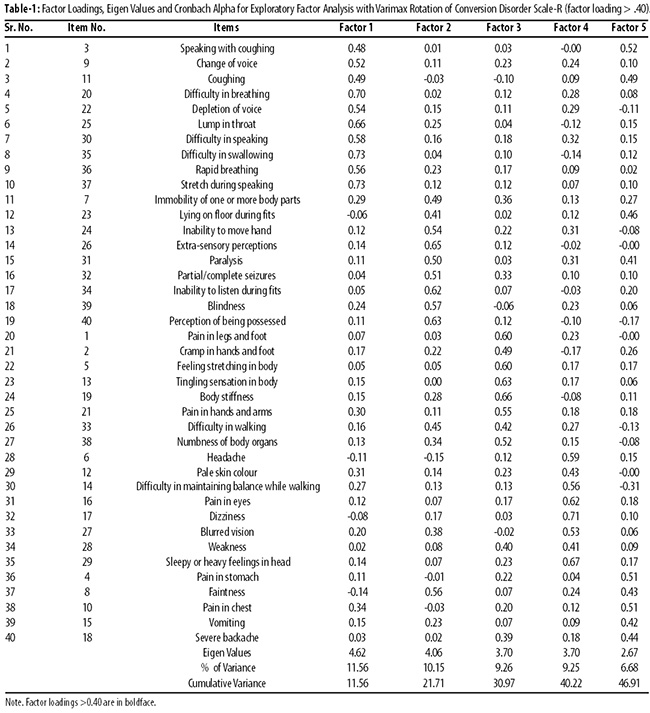 There was a significant difference between the scores of control and conversion groups. On average, conversion patients scored high on CDS-R as compared to the control group. The significant difference between scores of both groups indicated that CDS-R had high discriminant validity.
The split half reliability of the CDS-R was calculated by dividing the scale of 40 items into two equal halves of 20(50%) items each. The reliability of the first half of scale was found to be 0.83 and the reliability of its second half was calculated to be 0.86 which showed that both parts of CDS-R were equally reliable.
The data obtained from conversion disorder patients was analysed to identify the percentile scores and their suggested category. These values were important to interpret the scores obtained on CDS-R and identify the severity level of conversion symptoms of an individual (Table-2).

The sensitivity of a clinical test refers to "the ability of the test to correctly identify those patients with the disease" while specificity could be described as "ability of the test to correctly identify those patients without the disease".12
In order to find sensitivity and specificity of CDS-R, the concept of true and false positive and true and false negative was used, i.e. participants of both clinical and control groups who had cut-off CDS-R score of less than or above 19 were considered. The results of the sensitivity analysis showed that CDS-R correctly screened out 91(76%) patients while 29(24%) patients had scores less than cut-off of CDS-R as they had very mild symptoms of conversion disorder. Similarly, specificity analysis showed that 88(73%) participants of the control group were correctly reported as without conversion disorder while 32(27%) had scores above the cut-off of CDS-R showing some symptoms of conversion disorder (Table-3).