Objective: To observe the effect of Citrullus colocynthis on beta cell regeneration and intra-islet vasculature.
Methods: This experimental study was conducted at the University of Health Sciences, Lahore, Pakistan, from February 2013 to January 2014. It comprised male wistar rats weighing 100-150gand aged 6-8 weeks. The animals were divided into 6 groups. Group A1 served as control. Diabetes was induced in groups A2, B2 and C2 using single intravenous injection of 50mg/kg of alloxan. Animals having fasting blood glucose>250mg/dl were considered diabetic. Diabetic rats in groups B2 and C2 and their controls B1 and C1 were given 1ml/kg and 2ml/kg of Citrullus colocynthis aqueous seed extract orally per day for 14 days. Animals were sacrifised on day 15.
Results: Of the 48 rats, there were 8(16.7%) in each group. Citrullus colocynthis has stabilized the body weight of rats and difference was statistically significant on days 7(p<0.013) and 14(p<0.001). Citrullus colocynthis significantly reduced (p<0.001) the fasting blood sugar levels in a dose- and time-dependent manner. It increased the islet diameter (p<0.001) and beta cell count (p<0.001). The number of intra-islet capillaries was increased in group C2, but the difference was not statistically significant (p>0.05).
Conclusion: Citrullus colocynthis aqueous seed extract stabilised animal body weight and ameliorated hyperglycaemia in a dose- and time-dependent manner which was attributable to regenerative effect on beta cells and intra-islet vasculature.
Keywords: Diabetes, Citrullus colocynthis, Oxidative stress, Beta cell regeneration, Endothelial dysfunction. (JPMA 67: 715; 2017)

Diabetes mellitus, a debilitating chronic disorder, is posing serious health threats to general population and alarmingly increasing the global disease burden, particularly in the low-income countries.1 In type I diabetes, the environmental and nutritional factors induce oxidative stress and alter immune response by mediating the gene expression of cytokines which thrusts immune medicated beta cell loss.2 In type 2 diabetes mellitus, deranged glycaemic control induces glucotoxicity and lypotoxicity exposing the cellular environment to free fatty acid surge which drives beta cell apoptosis and insulin resistance.3 The loss of functional beta cell mass in endocrine pancreas is the ultimate hallmark of tissue injury in both type 1 or type 2 diabetes.4
The oxidative stress is the major underlying mechanism in the pathogenesis of diabetes-induced beta cell damage and its devastating complications.5 The patho-physiology of progression and complications of diabetes also involves hyperglycaemia-induced endothelial dysfunction which disturbs the balance of reactive nitrogen and reactive oxygen species (NOx-ROS system).6 As diabetes-induced oxidative stress disturbs the pancreatic endocrine-endothelial axis, it seems axiomatic that use of antioxidants can hamper the diabetes-induced oxidative injury and protect beta cells and endothelial cells.7
In this milieu, phytotherapy is gaining attention worldwide. Citrullus colocynthis (CCT), also known as bitter apple, wild gourd, tumba and wine of Sodom, is known for its medicinal value since long.8 The oil yield of Colocynth seeds makes 52% of its contents9 and 76.4% of its oil content is composed of linoleic acid.10 The aqueous seed extract of CCT is known to have many amino acids like Arginine, tryptophan, lysine and leucine; vitamins like biotin, thiamin and niacin; and phytochemical like flavanoids, phenols, alkaloids, tannins, glycosides, triterpenoids and saponins.11
CCT is known to have antioxidant,11 anti-diabetic,10,12-14 hypolipidemic,14 anti-cancer, hepato-protective15 and anti-inflammatory16 properties. The present study was designed to observe the role of CCT aqueous seed extract on beta cell regeneration and intra-islet vasculature in alloxan-induced diabetes, hypothesising that it induced both.

This experimental study was conducted at the University of Health Sciences (UHS), Lahore, Pakistan, from February 2013 to January 2014. It comprised male wistar rats weighing 100-150g. The animals were procured from the animal house of the university. Ethical approval was taken from the institutional review board. Declaration of the World Medical Association (WMA) made at Helsinki was followed regarding principles of animal handling in the research.17 Rats were divided into six equal groups named A1, B1, C1, A2, B2 and C2. Each group was kept in a separate cage and fed with rat chow and water ad libitum. After acclimatisation, diabetes was induced in groups A2, B2 and C2. Group A1 served as normal control and received only saline. Group A2 served as disease control. Groups B2 and C2, and their control groups B1 and C1 were given 1ml and 2ml per kg Citrullus colocynthis aqueous seed extract, respectively, through oral gavage once daily for 14 days.
Animals were kept fasted for 12 hours to potentiate the toxic effect of alloxan. Diabetes was induced by giving single intravenous injection of alloxan in the dorsal tail vein. For one rat, 50mg/kg bodyweight per animal alloxan was dissolved in 0.5ml of freshly prepared ice cold saline just before giving alloxan injection in the tail vein of rats, after warming and taping it, as a quick bolus to avoid decay of alloxan due to its short half-life.18 Alloxan is known to cause fatal hypoglycaemia 4-8 hours after its administration18 which, in the present study, was prevented by giving 5% glucose solution in water bottles of cages 8 hours after the alloxan injection for overnight. Diabetes was confirmed by checking fasting blood glucose (FBG) of rats after three days, with the help of glucometer (Accu-chek® performa, Roche Diagnostic, Germany). Blood for glucose estimation was taken by pricking the terminal part of tail with the help of lancet after warming and tapping it. Animals having fasting blood glucose more than 250mg/dl, 3 days after alloxan injection, were included in the diabetic groups.
CCT seeds were obtained from a local village of Sindh. Seeds were shade dried and crushed and powdered weighing 200g. Powder was soaked in 400ml of distilled water and stirred with magnetic stirrer for 1 hour at room temperature. Solution was then filtered and filtrate was used to treat experimental animals.19
Rats in diabetic groups B2 and C2 along with their normal control were given 1ml/kg and 2ml/kg of CCT through oral gavage using feeding tube. Rats were sacrificed on 15th day 24 hours after the last dose. Pancreata were preserved in bouin\\\'s solution for 74 hours. Tissues were washed with alcohol to remove picric acid until the yellow tinge of fixative solution turned clear. Tissues were processed in automatic tissue processor and embedded in molten paraffin wax to make tissue blocks for microtomy. Tissue sections of 5µm thickness were obtained to stain with haematoxylin and eosin stain (H&E) and aldehyde fuchsin stain for beta cells and immunohistochemical (IHC) stain using Bandeiraeasimplicifolia (BS)-1 lectinto stain intra-islet capillaries.
Weight of the animals (g) and fasting blood glucose (FBG) levels (mg/dl) were recorded on day 1, 7 and 14 of the experiment. Weight of the pancreas (g) was recorded at the end of the experiment. Mean numbers of islets, their diameter and number of beta cells were recorded using micrometry under light microscope. Eight sections were studied per group, at 400 magnifications. The number of islets/mm2 was recorded in eight non-overlapping fields using ocular grid.19
For immunohistochemistery, sections were deparaffinised and hydrated. For antigen retrieval sections were brought to citrate buffer and incubated at 95°C for 40 minutes. Sections were washed 4 times in phosphate buffer saline (PBS). After adding antibody enhancer, sections were incubated for 20 minutes at room temperature and washed 4 times in PBS. Antibody was applied for 30 minutes at room temperature and sections were washed in PBS. Fast red tablet dissolved in 5ml of naphthol phosphate and applied to sections for 10-20 minutes followed by washing in PBS and mounting.
For the quantification of intra islet capillaries, forty eight sections (8 per group) stained immunohistochemically using BS1 lectin were used.20 Microvascular density was observed by counting the number of BS-1 lectin stained capillaries per unit islet area (mm2) in 8 islets in eight randomly selected fields at 400 magnifications.
For counting beta cells, sections stained with modified aldehyde fuchsin were used. Eight randomly selected islets per section (64 islets per group) were studied to count beta cells (no/1000µm2) using point counting method.21 Beta cell diameter was determined by measuring the average of 5 inter-nuclear distances, including one nucleus, in five randomly selected islets per section. Inter-nuclear distances were calculated with the help of linear graticule. The number of divisions was counted on linear graticule mounted on ocular micrometer and was multiplied with calibration factor. Mean value was calculated for five randomly selected islets per section.22 Diameter of islets was determined using linear graticule. Major diameter (a) and minor diameter (b), at right angle to major, was recorded and profile diameter of islet was determined by taking square root of the product of a and b diameters.23
Data was analysed using SPSS 20. For quantitative parameters, one-way analysis of variance (ANOVA) was applied to calculate the mean values and standard deviation. Post-hoc Tukey test was applied to see which group means differs. Repeated measure ANOVA was used to see the significance of change in parameters that were repeatedly measured (body weight and FBS) at three levels (day 1, day 7 and day 14) in the experiment. Pearson correlation analysis was done to see the relationship between beta cells regeneration and intra-islet capillaries. 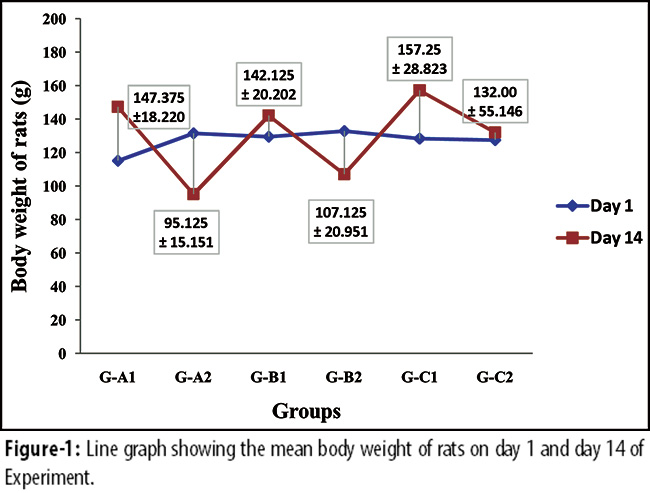 Morphometric analysis showed that the number of islets/mm2 decreased (p=0.001) in alloxan-induced damage to the islet tissue and the difference was statistically significant when group C2 was compared with control groups (p<0.001); however, group C2 was not statistically different from groups B2 and A2 (p>0.05).
The difference in the islet diameter among the groups was significant (p=0.001). Islet diameter was decreased in group (A2) and increased after treatment with CCT extract. The difference was significant when groups A2 and B2 were compared with control groups A1 and B1 (p<0.05 each); whereas, group C2 was not statistically different from groups A1, B1 and C1 (p>0.05).
The mean numbers of beta cells/1,000µm2 was significantly different when compared among the groups (p<0.001). Beta cell count decreased in alloxan-treated rats and treatment with CCT extract significantly increased the number of beta cells in pancreatic islets in groups B2 and C2 which received CCT extract in low and high dose respectively; however, mean number of beta cells in group B2 was not significantly different from group A2. But beta cell count in group C2, which received high dose of CCT extract, was significantly increased when compared with group A2 (p<0.001) and B2 (p=0.002) and the difference was statistically insignificant when compared with those of group A1. Beta cell count also increased in control groups B1 and C1, and group C2 was significantly different from B1 (p=0.014) and C1 (p<0.001) in which normal rats received CCT extract in low and high dose respectively. Moreover, the increase in beta cell number was positively correlated with intra-islet capillaries (p<0.001). The number of capillaries/mm2 decreased in alloxan-treated rats and increased in alloxan plus CCT-treated rats (Figure-2). 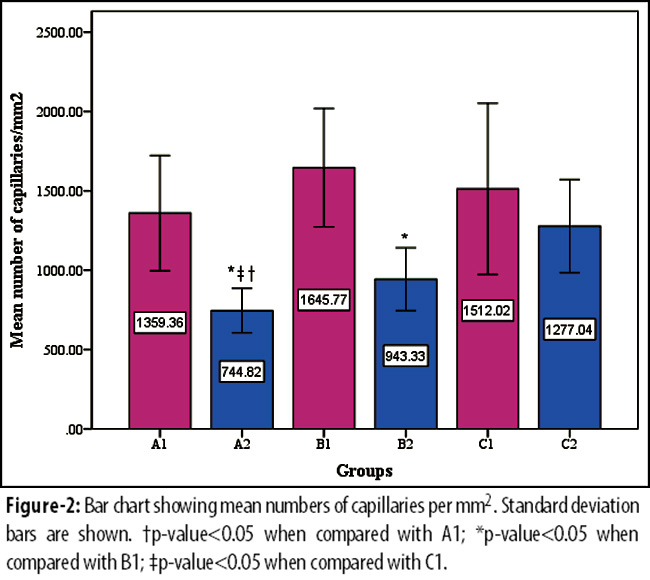 The fasting blood glucose levels were recorded to evaluate the functional integrity of beta cell mass. Mean values of FBS on day 1, 7 and 14 of experiment were significantly different among the groups (p<0.001). There was no statistically significant difference among the control groups A1, B1 and C1. However, there was statistically significant dose and time-dependent decrease in mean fasting blood glucose in CCT-treated diabetic groups (Figure-3). 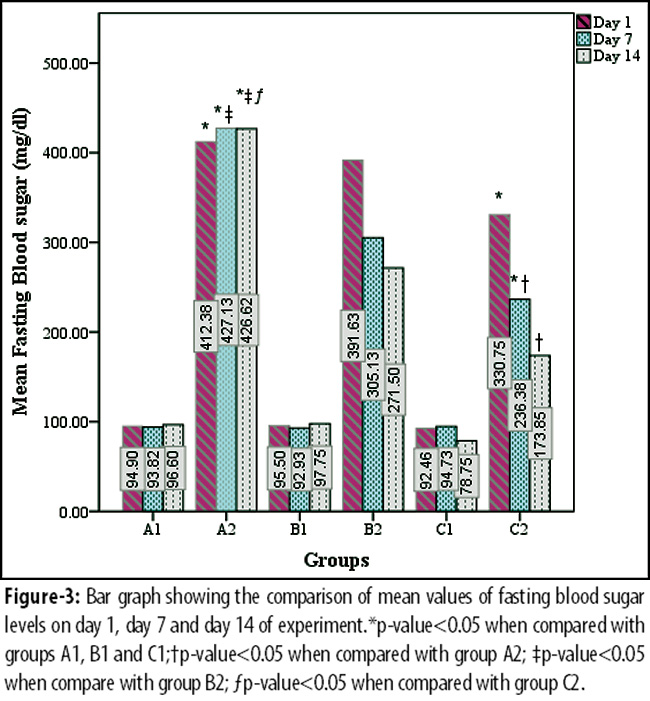 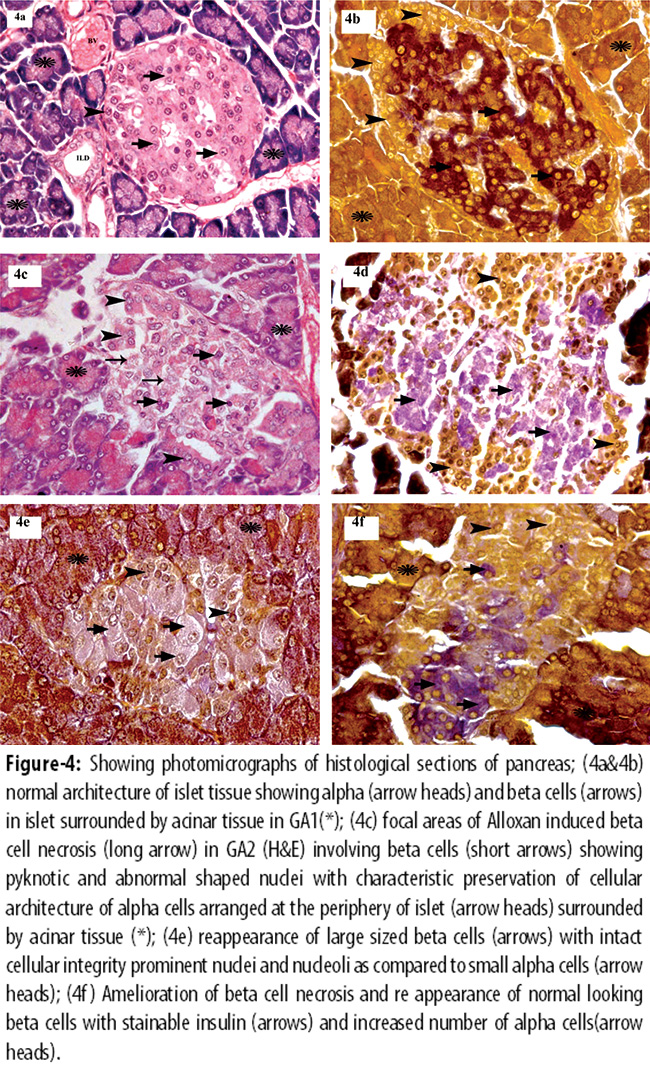 CCT extract was found to be a potent anti-diabetic and has regenerative effect on beta cells in positive correlation with intra-islet vasculature in alloxan-induced diabetes.
Disclaimer: None.
Conflict of Interest: None.
Source of Funding: The financial support by UHS is gratefully acknowledged.