The traditional medical learning strategies have been challenged by altered healthcare delivery systems and advanced technological developments.1 The transition of medical students to doctors and theoretical knowledge to clinical practice require proficiency and expertise in clinical skills that is obtained by repetition.2 Medical students must acquire competence in various skills before graduation. The medical student turning into a doctor is a huge change and he may feel stressed and unprepared for performance of clinical skills on patients.3 Also, practising on patients make them uncomfortable and due to improvement in medical facilities, the patients admitted are sicker and need prompt and proper treatment.4
To overcome this anxiety, and to develop expertise without distressing patients, clinical skill laboratories (CSLs) were developed. The concept of such laboratories is not new, rather development of dedicated skill labs is in practice for the last four decades.5 Establishment of CSL requires financial resources and trained teaching staff. Although CSLs have been developed in various countries, but they vary according to the available facilities. They can range from single manikin to state-of-the-art purpose-built labs with all the latest equipment to meet the current challenges in medical education.6
Technological advancements have led to development of such models that simulate human beings in that they can breathe, generate electrocardiogram (ECG), have pulse, heart sounds and an airway on which various procedures can be done.7 Moreover, the practised method will give a predictable result, can be repeated many times and will give the same response.8 Patient safety concerns and acknowledgement of the fact that hospitals do not provide ideal learning environments have resulted in a reduction in the trend of learning a new skill on patient in a clinical setting.9 The use of CSLs have especially been appreciated in critical care aspects of medical field such as management of airway, resuscitation, trauma and disaster management where a minor mistake can convert morbidity into mortality.10 They provide a better learning environment and prevent undue patient botheration.11
Medical students take skill laboratory training as the favoured learning modality for better acquaintance of knowledge, skill and attitude in comparison with the traditional on-patient learning. This technological amelioration will upgrade medical education and improve patient care.12 Simulation training results in improved knowledge, confidence and a better communication.13 In a developing country like Pakistan, the introduction of CSLs along with the component of medical informatics has shown long-term promising outcome in the acquisition of clinical and medical informatics knowledge and skill.14 The current study was planned to determine the effect of skill laboratory training on academic performance of final year medical students.

This quasi-experimental study was conducted at Army Medical College, Rawalpindi, Pakistan, from February to April 2015. Sample size was calculated using GPower 3.1.9.2 software and keeping the values of effect size, alpha error probability and power as 0.5, 0.05 and 0.8 respectively for a two tailed independent t test. Subjects were inducted through non-probability convenience sampling. Approval for the study was obtained from the institutional ethics committee, and written informed consent was obtained from all the participants.
Students of 2 batches of final year MBBS classes were included on the basis of exposure to skill lab training or otherwise. Batch 1, the seniors, underwent conventional training in Medicine without being exposed to the skill lab, while Batch 2, the juniors, got formal training through skill lab. At the end of the academic year, both the batches took their examination. Modes of examination were long case, short case, viva and objective structured clinical examination (OSCE). The main difference of training between the two groups was exposure to skill lab. Efforts were made to keep all other facets of training between the two groups as similar as possible. Marks were taken as percentage with cut-off value of 50% as pass marks.
Data was analysed using SPSS 23. Mean and standard deviation (SD) were calculated for numerical variables like age and marks, whereas frequency and percentage were calculated for categorical variables like gender. Independent samples t test was used to compare marks between the two groups. Chi Square test was used to determine association of students who passed or failed the examination with exposure to skill lab training. Alpha value was kept at 0.05 at a confidence level of 95%. 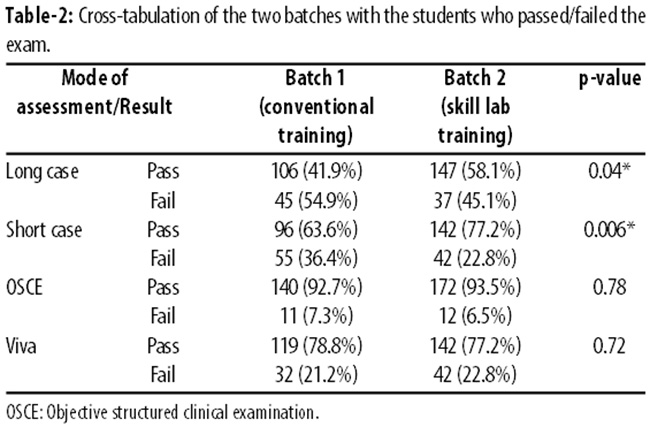 In our study, the batch that underwent skill lab training showed better results in long case, short case and OSCE. Result of viva was comparable between the two batches. It was clear that repetition of a procedure till perfection without fear of mistake or patient discomfort improved the clinical skills of the students, resulting in a greater expertise and better proficiency.
The marks obtained by the batch with skill lab training in OSCE were significantly higher than those with conventional training. However, the number of students who passed or failed the OSCE was comparable among the two batches. Two factors seem to be responsible for this apparent disparity between the results of OSCE. First, the comparison of marks between the two batches was based on the average marks of the groups irrespective of the students passing or failing the exam. The cut-off value for passing the exam is arbitrary and certainly was not accounted for by statistical test of significance which per se compared the averages. So, significant but small differences in average marks may not be reflected when frequency of students passing or failing the exam was compared which was exactly the case with the current study. Another reason which may account for this disparity is the nature of OSCE. It is a type of examination where clinical skills along with communication skills are assessed. For marking purpose, the whole examination is split into certain components like greeting, introduction to the patient, explanation of procedure and consent (communication aspect) and specific standardised protocols and steps for the procedure (clinical aspect). Skill lab training was successful in strengthening the clinical skills of the students. However, it remained deficient in improving the communication aspect. The response of patients is variable depending upon education, attitude, severity of disease and level of cooperation. Practice and exposure to different patients improves the communication skills.Unfortunately, simulated training commonly lacks in this aspect. Students with naturally good communication skills performed well and got exceptionally good marks, but majority of students due to lack of exposure could not perform well and got lesser marks, resulting in significant difference in mean marks obtained in OSCE but insignificant difference in pass and fail ratio regarding comparison between the two batches.
There was insignificant difference in results of viva examination regarding both marks obtained and pass/fail ratio between the two batches. Viva is a verbal response to the question asked by the examiner and relies mainly on theoretical knowledge of the student. Skill lab training is not concerned with the theoretical aspect so the results were comparable between the two batches.
In a study conducted by Liaqat et al, at Foundation University Medical College, where CSL training was introduced to 1st year medical students, the result in Anatomy and Physiology modules came out to be 15-25.5% better than the previous batch which had no CSL training.15 Similarly, a study was conducted by Herrmann-Werner et al. to compare the outcome of traditional training with simulated training in first year medical students for various procedures such as intravenous (IV) cannulation which were assessed by two independent blinded video assessors and binary check lists. The results showed students with simulated training performed better both immediately and after up to six months of training.16
Lund et al. conducted a study in undergraduate medical students to compare the skill of IV cannulation between two groups of students who got training in skill lab or patient bedside. The performance was assessed by independent blinded video assessors and binary check lists. The performance was significantly better in students who received skill lab training and performed the procedure in lesser time.17 In a study conducted by Zhang et al in Chinese medical students, the results of OSCE were compared among two groups of students who either received or did not receive skill lab training. The results were significantly better in students who were trained in skill laboratory. Hence, simulation training substantially enhanced the clinical skills of students.18 Improvement in skills was also observed when this skill lab concept was applied in a developing country. Tran et al’s study showed that medical students of Vietnam obtained good scores when they were trained in different basic skills in newly-developed skill labs.19 Pereferrer F. study showed that although simulation training improved clinical skills of students from various years of medical school, but the greater the year of the medical student, the greater was the improvement. Likewise, the students in 6th year of medical school showed the most improvement. The increased theoretical knowledge enhances the learning of surgical skills.20 Simulation training has also shown promising results in postgraduate medical students. Bagai A et al. showed improved technique of cardiac catheterisation in cardiology trainees after simulation training.21 Results of all the studies mentioned above are consistent with our findings and support them.

Acquisition of clinical skills significantly improved when medial students were trained in skill laboratories. Hence, it is the need of the hour to establish CSLs at medical colleges so that clinical proficiency of future doctors can be enhanced without putting real patients at risk of experimentation.
Disclaimer: None.
Conflict of Interest: None.
Source of Funding: None.