Objective: To investigate the association between the perception of expressed emotion and psychopathology of school-going adolescents in a non-clinical sample.
Methods: The cross-sectional field study was conducted in Kocaeli, Turkey, and comprised high-school students during the 2014-15 school years. Data was collected using the Information Collection Form, Strengths and Difficulties Questionnaire and Shortened Level of Expressed Emotion Scale. SPSS 21 was used for data analysis.
Results: Of the 487 subjects, 295(60.57%) were girls and 192(39.43%) were boys. The overall median age was 16 (inter-quartile range: 15-17 years). There were significant positive relationships between the scales in terms of emotional problems (p<0.001), behavioural problems (p<0.001), Attention-deficit/hyperactivity disorder (p<0.001), and peer relationship problems (p<0.001). There was also a negative significant relationship between pro-social behaviours and expressed emotion (p<0.001).
Conclusion: The concept of perceived expressed emotion in non-clinical adolescents is useful in alarming clinicians and preventing mental disorders.
Keywords: Adolescence, Expressed emotion, Psychopathology, Family, Perception. (JPMA 67: 706; 2017)

Mental health disorders are the most common health problems in adolescents.1 Dysfunctional parenting and psychopathologic features in families may trigger problems in adolescents.2 Expressed Emotion (EE) is an under-utilised measure of environmental stress in the household, characterised by communication types, including hostility, criticism and emotional over-involvement (EOI).3
Studies in clinical and non-clinical populations have shown consistent links between high EE and psychopathology of adolescents, like depression, anxiety, disruptive problems, attention and hyperactivity disorder and antisocial behaviour problems, obsessive compulsive disorder (OCD), eating disorder etc.4-12 Psychiatric disorders were five-fold higher in children of mothers with high EE, and this ratio increased eight-fold when attention deficit hyperactive disorder (ADHD), conduct disorder and separation anxiety were also considered.12 EE has been reported in both clinical and non-clinical populations to affect the likelihood of behavioural problems and poor coping mechanisms for stress.13 A study14 with a population of 1599 non-clinical adolescents reported that EE and excessively critical family attitudes were also related to depression and antisocial behaviours indirectly.
EE is known as a feature of family not individuals.15 But it may be changed from patient to patient; for example, long-term caregivers for schizophrenic patients show higher EE for some patients and lower EE for others.16 Therefore, the importance of self-reported information cannot be overestimated. The perception of the EE is important as well as how it is. Literature shows that EE was usually assessed with semi-structured interviews with families or questionnaires4-7 and these measurement tools are not special for the adolescents. This causes gaps in the understanding of perceived EE of the adolescents.
The current study was planned to investigate the association between the perceived EE of adolescents in a non-clinical sample and adolescents\\\' emotional and behavioural problems. Another objective was to evaluate the association between sociodemographic variables such as age and gender and perceived EE levels. The use of self-reporting scales, answered by adolescents themselves is the most important feature of this study, which distinguishes it from the other studies. Besides, our study is the first to investigate the relationship between perceived EE and psychopathology in a Turkish sample.

The cross-sectional field study was conducted in Kocaeli, Turkey, and comprised high-school students during the 2014-15 school years. The minimum sample size required was calculated by assuming alpha=0.05 and a confidence level of 95%. The total potential regional population size in the region was 14500, the assumed margin of error was d=0.05, and the population proportion was P=0.5 (most conservative). Participation in the study was voluntary, and students not willing to participate were excluded. Assuming a likely non-response rate of 25%, we initially solicited 500 subjects for the study. Three different high schools from areas known for having different socioeconomic levels were randomly selected, and then volunteers from the first, second, third and fourth classes who were in class during the study days were included. All the participants and their parents gave informed consent after being informed of the methods and objectives of the study. Required legal permission and approval were obtained from the Kocaeli Providence Directorate for National Education and the Uludag University Faculty of Medicine Ethics Committee before data collection. The study was conducted after required legal permissions and data was collected between November, 2014 and February, 2015. Data was collected by using an information collection form (ICF) developed by the researchers, the Shortened Level of Expressed Emotion Scale (S-LEES), and the adolescent form of the Strengths and Difficulties Questionnaire (SDQ). During data collection, researchers were on hand to explain the scales to the students.
The ICF gathered data about socio-demographic characteristics, including age, gender, educational status of the parents, occupations of the parents, number of siblings, birth order, perceived income, perceived economic status, and the perceived health level and status of the students and their parents. Income levels were determined based on the official starvation and poverty limits of 2014.
The SDQ was translated into Turkish by Güvenir et al.17 It was developed in 1997 by British psychiatrist Robert Goodman for screening behavioural and emotional problems in children and adolescents.18 The SDQ has 25 items evaluating both positive and negative emotions and behavioural features. These items are grouped into 5 sub-scales, which contain 5 items each according to both appropriate diagnostic measures and the results of factor analysis: ADHD, behavioural problems, emotional problems, peer relationship problems and social behaviours. In Turkey, the Cronbach\\\'s alpha for the SDQ was found to be 0.73 in a study by Güvenir et al.18 Cronbach\\\'s alpha coefficient was 0.729 for our sample.
The S-LEES, developed by Nelis et al,19 was translated into Turkish by Vural et al20 in 2013. It consists of 33 items measuring the EE of the perceived most effective person in the participant\\\'s life in the preceding 3 months. The three subscales of S-LEES include lack of emotional support, irritability and intrusiveness. Higher scores indicate higher levels of EE.
In the study of Nelis et al,19 Cronbach\\\'s alpha coefficients were 0.88, 0.82 and 0.70 for the S-LEES, irritability and intrusiveness subscales respectively. When the scale reliability was evaluated,21 Cronbach\\\'s alpha coefficient was found to be as high as 0.90. The scale is completed by the adolescents directly. Items are answered on a Likert scale with 4 units ranging from "(1) not true" to "(4) true". Cronbach\\\'s alpha coefficient was 0.914 for our sample.
All analyses were performed using SPSS 21. Data normality was tested with the Shapiro-Wilk\\\'s test. Since they were not normally distributed, SDQ and S-LEES sub-scale and total-scale scores were compared between the genders with Mann-Whitney U test and data was presented as median (interquartile range [IQR]). Association between S-LEES scale scores and SDQ scale scores was evaluated with Spearman\\\'s correlation coefficient. Categorical variables were presented with frequency and percentage values. P<0.05 was considered significant. 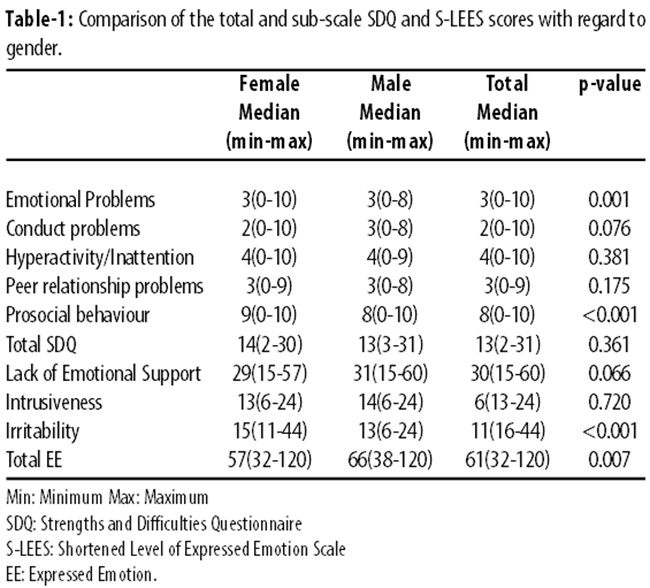 Significance levels and correlation coefficients according to the evaluation results of differently perceived EE and emotional behavioural problems in girls and boys were noted (Table-3). 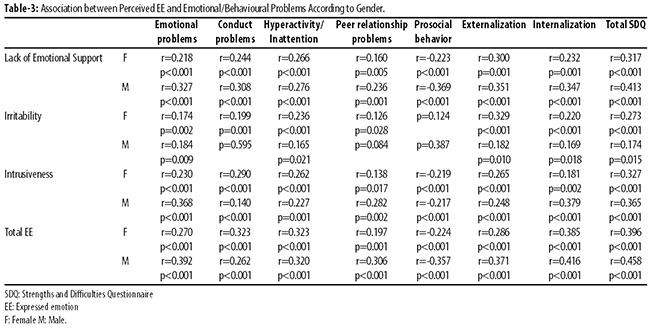 In our study association between emotional/behavioural problems and perceived EE were investigated, and the effects of some sociodemographic variables were evaluated. The hypothesis regarding increased emotional or behavioural problems in families with high EE was examined by comparing the SDQ and S-LEES results.
There were broader gender-based differences on both scales. Consistent with the literature, SDQ sub-scale scores for emotional problems and pro-social behaviours were significantly higher in girls.21 Also consistent with literature, there were no significant differences between genders in terms of SDQ total scores or behavioural problems, ADHD, or peer relationship problems.20 There are different views regarding the association between EE and gender. We found that girls perceived EE to be significantly higher than boys which is similar to literature.22 When evaluating the sub-scales, girls perceived higher irritability, whereas there was no significant difference in terms of intrusiveness or lack of emotional support. These differences according to gender on the S-LEES may be due to a balancing effect of the differences in the total scores on the general scale caused by the presence of differences in the subscales.
When evaluating the results of our studies, a strong positive relationship between the sub-scales of perceived EE in adolescents and the sub-scales of the SDQ and a higher degree of association between internalisation and externalisation problems and perceived EE were found, which was consistent with literature.4-7 There was a strong negative association between pro-social behaviours and perceived EE. In the light of these findings, higher levels of problematic behaviours can be expected from adolescents who perceived high EE from their parents. These adolescents have weaker social skills and more negative friendship relationships. When evaluating how EE predicts psychopathology in girls and boys, we found that there was a robust correlation for both genders. These findings support the independent association of perceived EE with psychopathology.
In relevant literature, there are differences between the adults and adolescents. For example EOI may be perceived as more intrusive in adulthood,22 whereas it may be perceived more as protectiveness, warmth and emotional support in adolescence.23 The developmental difference between children and adolescents must be considered in studies related to EE.23 On the other hand, internalising and externalising symptom dimensions were found both to predict the adolescent\\\'s perception of maternal EE as well as the mother\\\'s own rated EE criticism over time.3 In our study, a self-reporting scale, which was developed especially for adolescents was used and the strong associations were identified while the lack of emotional support, irritability and intrusiveness sub-scales were separately evaluated. Along with associations with the total perceived EE score, the results showed that S-LEES is effective in evaluating the needs and perceptions of adolescents.
Another issue discussed in literature is whether EE arises as a reaction to the stress of dealing with difficult behaviours or whether it is a characteristic feature of the person.24 This question remains controversial. Vostanis et al. reported that EE levels may change without specific intervention for EE as the clinical status of child changes,25 but Hooley et al.26 found EE to be constant. The evaluation of EE in a non-clinical sample could, therefore, be enlightening. Thus, it is important that EE studies be performed in non-clinical populations.
EE has been shown to exhibit sociocultural differences. For example, Latin families show more critical EE attitudes than British families,27 and EE is not a predictor for the recurrence of schizophrenia in African-Americans.28 Our study also considers the sociocultural structure of Turkish society.
Limitations of our study were not evaluating parental psychopathologies or performing psychopathological evaluations with established interviews. However, by using a self-reporting scale (S-LEES) especially developed for adolescents that evaluated lack of emotional support, intrusiveness and irritability, the self-reporting of adolescents about the most influential person in their family is among the strengths of this study. In addition, this is also the first study to investigate the relationship between perceived EE and psychopathology in Turkish community and a non-clinical sample.

The study revealed a strong relationship between perceived EE and psychopathology in non-clinical samples in Turkish society. Considering the importance of EE for the diagnosis and treatment of psychopathologies and preventive mental health, we recommend that future studies of EE in non-clinical samples should be conducted to broaden our understanding, and improve treatment and prevention of mental health disorders.
Conflict of Interest: None.
Financial Disclosure: None.
Disclaimer: The study was first presented as Oral Poster at the 8th International Congress on Psychopharmacology reference number of the abstract : 0297, Antalya,Turkey, 23 April 2016.