Objective: To determine the microbiological profile and antibiotic susceptibility patterns of organisms isolated from diabetic foot ulcers in a tertiary care hospital Karachi, Pakistan.
Methods: This descriptive study was conducted at the Baqai Institute of Diabetology and Endocrinology (BIDE), from January 2013 to March 2014. Bone, pus and tissue samples were collected from 342 patients with diabetic foot infections and inoculated on appropriate media. Antibiotic susceptibility tests were done by Kirby Bauer disk diffusion method.
Results: A total of 671 aerobic bacteria were isolated from 473 specimens with an average of 1.45 isolates per specimen. Poly-microbial infection was 56.87%. Gram- negative isolates were predominant 76.27%.Staphylococcus aureus was most frequent among Gram-positive 20.7% and Escherichia coli 15.72% in Gram negative isolates. MRSA was found in 26.76% Staphylococcus aureus. About 33.48% of antimicrobial resistant isolates were observed.
Conclusions: In our study, Gram negative aerobes were predominant in the diabetic foot infections. A significant number of MDR isolates were also observed in this cohort. Delayed referral and inappropriate use of broad spectrum antibiotics may be the main cause of increase in the frequency of MDR isolates.
Keywords: Diabetic foot, Pakistan, Foot ulcer, Antibiotic susceptibility. (JPMA 67: 665; 2017)

Diabetic Foot infections are common, complex, expensive and important causes for hospitalization of patients with diabetes.1-3 About one-in-four patients with diabetes will have an ulcer in their lifetime and approximately half of these ulcers will develop an infection. These infections are the leading cause of patient morbidity and are associated with lower limb amputation if not treated properly.2,4,5 In developing countries like Pakistan, about 14-20% of patients with diabetes who develop foot ulcers undergo an amputation.6
Diabetic foot infections are mostly Polymicrobial,7,8 consisting of both Gram positive and Gram negative aerobic bacteria such as S. aureus, Streptococcus pyogenes, Escherichia coli, Pseudomonas aeruginosa, Proteus and Klebsiella species.8-11
There are many discrepancies regarding the bacteriology of diabetic foot infections.12 In some studies Gram positive isolates were found to be the main causative pathogen while in others a predominance of Gram-negative aerobes has been reported.12
Moreover many bacterial pathogens impressively develop the ability to adapt and to overcome the challenges of antibiotics in their environment10 therefore antimicrobial resistance has become a growing problem in diabetic foot in developing countries.13-15 Multiple Drug Resistant (MDR) and Methicillin-Resistant Staphylococcus aureus (MRSA) are two highly challenging situations for a tertiary care Physician. Antimicrobial resistance is also increases morbidity, mortality and cost of treatment and posing a burden on health care system.13-15
Management of diabetic foot infection is difficult and challenging. The proper management of these infections with the help of culture and antimicrobial susceptibility results may decrease the morbidity and amputation rate.2,3,5,7 The knowledge regarding frequency and susceptibility pattern of organism are important for the treatment of diabetic foot infections.
Therefore the aim of the current study was to determine the type of organism and their antimicrobial susceptibility pattern in Diabetic foot infections at the specialized diabetic foot clinic.

Data was analyzed on Statistical Package for Social Sciences (SPSS) version 17. Data was presented as Mean±SD for continuous variables and frequency with percentage for categorical variables. 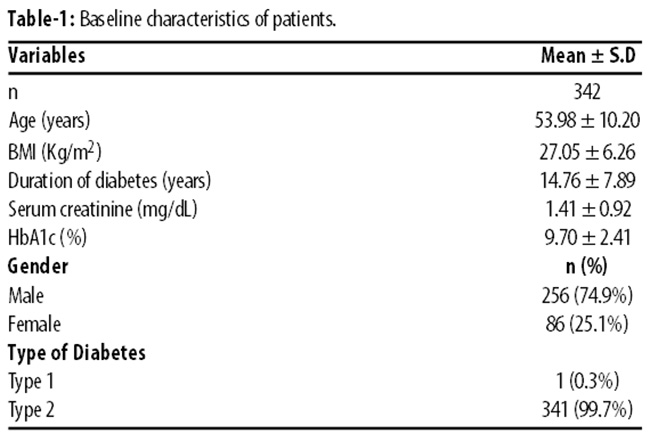 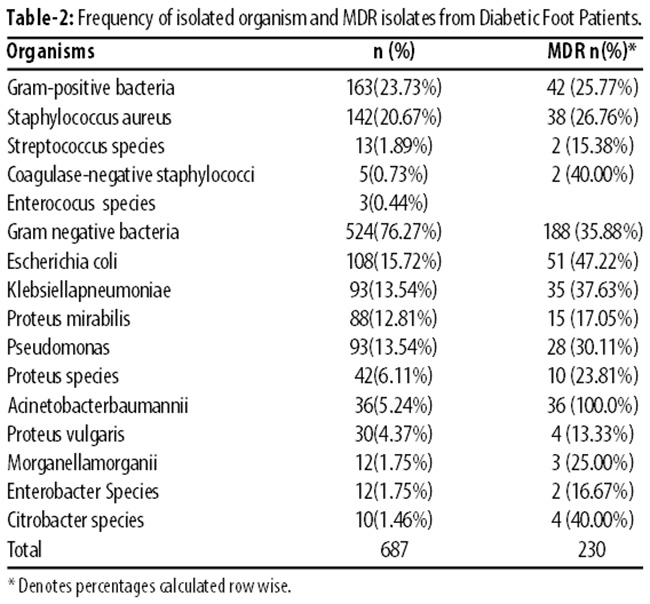 A significant proportion of antimicrobial resistant isolates were observed in our study 418 (33.48%). MRSA was found in 38 (26.76%) Staphylococcus aureus isolates. All Acinetobacterbaumannii strains were found to be MDR. Most of Gram positive isolates were resistant to Ciprofloxacin (53.68%), Clarithromycin (53.62%) and Erythromycin (52.0%) (Table-3).

In the present study a predominance of polymicrobial isolates were observed which is a common finding in most other studies,14,21-26 although some reports showed low frequency of polymicrobial infection.9,27 Diabetic foot infections are recognized to be polymicrobial in nature since 1980.28 Average bacterial isolates per specimen was1.45 in our study which was similar to an Indian study29 but was lower as compared to other studies.12,21,25 Although, many studies showed the predominance of Gram-positive isolates in diabetic foot infections25,30,31 but there was also a changing trend noted with Gram-negative bacteria replacing Gram-positive isolates as commonest agents.14 We also found Gram-negative isolates predominant in this study. This change in trend may be explained by the inappropriate use of empirical antibiotic therapy.
Escherichia coli amongst the Gram negative was commonest isolate in our study which was also reported by Akhi MT and Tiwari S, et al,21,26 Klebsiellapneumoniae and Proteus mirabilis were the 2nd and 3rd most common Gram negative isolates in our study, as found in Abd Al-HameadHefni, et al., from Egypt.8
P. aeruginosa presents a serious therapeutic challenge for treatment10 and cost of care. A significant proportion of P. aeruginosa was isolated in our study which is also shown by Sugandhi P and Cabete J.32,33 Inappropriate use of antibiotics and long hospital stay may contribute to the significant rise in this infection.
Amongst individual isolates Staphylococcus aureus remains the most frequent, as found in various other studies (Table-2).22,24,25,33,34
We also found a high frequency of MDR isolates, many others also reported the high frequencies.3,5,9,15 Antimicrobial resistance is a major public health concern which increases morbidity and mortality as well as cost of health care. During the last decade, an increase in the rates of antimicrobial resistance worldwide and an increased frequency of MDR isolates in the clinical setting is also demonstrated.3,5,9,13,14
There was a predominance of Gram negative MDR isolates (81.74%) in our study. Acinetobacterbaumannii was completely resistant to all the common antibiotics tested not only in our study but also in another study on Antimicrobial susceptibility pattern in diabetic foot ulcer.24
Frequency of MRSA is increasing worldwide for which appropriate and aggressive therapy is required to control it.30 We found high frequency of MRSA among S aureus isolates which was also seen in a study on Microbiological study of diabetic foot infections14 and a study on Microbiology at first visit of moderate-to-severe diabetic foot infection with antimicrobial activity and a survey of quinolone monotherapy.25
On the contrary to our findings, a very low frequency of MRSA was found in an Egyptian study by Abd Al-Hamead Hefni, et al.,8 Prolonged hospitalization, surgical procedures, and prolonged use of broad spectrum antibiotic therapy may predispose patients to colonization and infection with antibiotic-resistant organisms.35
All Gram positive isolates were sensitive to vancomycin in our study, a fact also supported by other studies.9,23,29,36 More than half of S aureus isolates were resistant to ciprofloxacin; similar results were reported in two Iranian studies.9,21 Majority of E coli isolates were resistant to cefuroxime, cefotaxime, ciprofloxacin and clavulanic acid in our study, similar to some other studies.5,7,9,21,35

In our study, Gram negative aerobes were predominant in the diabetic foot infections. A significant number of MDR isolates were also observed in this cohort. Delayed referral and inappropriate use of broad spectrum antibiotics may be the main cause of increase in the frequency of MDR isolates. Further large scale studies are needed to validate our findings especially at primary and secondary care centers.
Source of Funding: None to declare.
Declaration of Competing Interests: None to declare.
Disclaimer: None.

Amplification of Mitochondrial DNA for detection of Plasmodiumvivax in Balochistan