Objective: To evaluate the performance of TUBEX® TF in diagnosing enteric fever.
Methods: The retrospective study was performed at the Northwest General Hospital and Research Centre, Peshawar, Pakistan, and comprised data of all patients who had blood cultures and TUBEX®TF performed as part of their evaluation from April 2011 to November 2015. SPSS 16 was used for data analysis.
Results: Of the 970 patients, salmonella typhi was isolated in 43(4.43%), paratyphi in 9(0.93%) and other organisms in 162(16.7%). TUBEX® TF was positive in 18(1.86%) cases and negative in 25(2.58%). Of the culture-negative patients, TUBEX® TF was positive in 35(3.6%) and negative in 136(14%). In cases where no organism was cultured, TUBEX® TF was positive in 4(0.4%) and negative in 752(77.5%). The positive predictive value of TUBEX® TF was 31.58% and the negative predictive value was 97.26%. The sensitivity of TUBEX® TF was 41.86% while specificity was 95.97%.
Conclusion: TUBEX® TF with its low sensitivity and positive predictive value was a poor tool for diagnosing enteric fever.
Keywords: Salmonella typhi, Paratyphi, Blood culture, TUBEX® TF. (JPMA 67: 661; 2017)

Enteric fever is the name given to a constellation of symptoms and signs resulting from infection with the organism salmonella typhi or paratyphi. Presenting complaints consist of high-grade fever, with anorexia, nausea, vomiting, diarrhoea, abdominal pain, etc. In the first week of illness step ladder pattern of fever is generally present. This is associated with relative bradycardia or pulse temperature dissociation. By the second week rose spots or salmon-coloured macules may be appreciated on the trunk and abdomen. In the third week of illness, hepatosplenomegaly, intestinal bleeding and perforation can occur. Resolution of symptoms can take weeks to months.1
Enteric fever is a common cause of morbidity and mortality in the developing countries like Pakistan.1,2 Approximately 22 million cases and 200,000 to 600,000 deaths are attributable to enteric fever globally.2 According to a study in 2008, among the Asian countries the prevalence of enteric fever is highest in Pakistan and India.3 Another population study involving five Asian countries showed Pakistan in second place with annual typhoid prevalence of 412.9 (per 100,000 persons per year). Poor personal hygiene, unclean water and poor sanitary conditions are a few of the reasons responsible for the high incidence of enteric fever in Pakistan.4
Salmonella typhi is the main causative organism although paratyphi has also emerged as a major cause of enteric fever.4,5 Isolation of the organism from blood, stool and bone marrow is the most reliable method of diagnosis.6,7 The necessary equipment and expertise, however, is not widely available. Hence, treatment is started presumptively based on the clinical history.8 This has resulted in misdiagnosis, inappropriate prescriptions of antibiotics and ultimately to the emergence of multidrug resistant salmonella typhi strains.9-11 The latter has emerged as a major threat to the treatment of enteric fever secondary to salmonella typhi.
Accordingly, serological diagnosis through various tests, including Widal, TUBEX TF and Typhidot, was sought. However, none of the tests have shown sufficient sensitivity, specificity and reliability in endemic areas. A single positive Widal test is of limited value in endemic countries as the baseline titres cannot be established with adequate accuracy.12 Despite this, Widal, Typhidot and TUBEX® TF continue to be routinely employed in the diagnosis of enteric fever.13,14 Furthermore, these tests are also being utilized in conducting prevalence studies across the globe, particularly in developing countries, where inappropriate results can lead to wastage of resources.
The current study was planned to assess the performance of TUBEX® TF in the diagnosis of enteric fever.

This retrospective study was conducted at the Northwest General Hospital and Research Centre, Hayatabad, Peshawar, Pakistan. Data was collected of all patients who had blood cultures and TUBEX TF performed as part of their evaluation from April 2011 to November 2015.
Convenience sampling was employed to collect data after obtaining ethical approval from the institutional ethics review committee.
Specimens were received by standard protocols (BD Bactec Bottles) to exclude contaminations. These were placed in an automatic incubator (BACTEC 9050) using B12 medium. Positive blood cultures were further processed and colonies were identified using standard biochemical tests. Antibiotic susceptibilities were checked as per Clinical and Laboratory Standards Institute (CLSI) guidelines by Kirby-Bauer disc diffusion method.15
TUBEX® TF kit was employed following the manufacturer instructions to detect immunoglobulin M (IgM) antibodies to Salmonella typhi O9 antigen. TUBEX® TF is a semi-quantitative colorimetric test based on Inhibition Magnetic Binding Immunoassay (IMBI®) technology utilising the advantages of the traditional Widal technique, such as simplicity and visual interpretation of fluid. IMBI® technology exhibits specificity normally accorded to enzyme-linked immunosorbent assays (ELISAs) through the use of purified antigens for detection. It enables diagnosis of acute phase disease by detection of infection-specific Salmonella typhi IgM anti-O9 antibodies in serum. The method specifically detects IgM antibodies to the Salmonella enteric serovartyphi09 lipopolysaccharide antigen.16
Considering blood culture as the gold standard, sensitivity, specificity, positive and negative predictive values were calculated using SPSS 16. Sensitivity, which is the percentage of positive individuals correctly identified as such, was calculated by: sensitivity = True Positive [TP]/ True Positive [TP] + False Negative [FN] × 100%. Specificity, which is the percentage of negative individuals correctly identified as such, was calculated by: specificity = True Negative [TN]/ True Negative [TN] + False Positive [FP] × 100%. Positive predictive value (PPV), the proportion of positive test results that are truly positive, was calculated by: PPV = TP/(TP + FP) × 100%, and the negative predictive value (NPV), which is the proportion of negative test results that are truly negative, was calculated using the equation: NPV = TN/(TN + FN) × 100%. 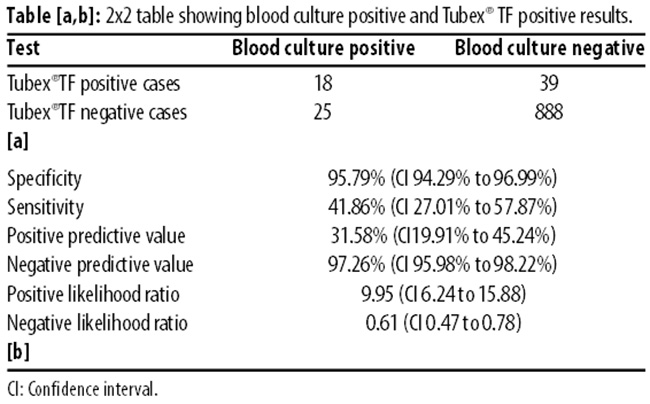 Diagnostic tests constantly need to be evaluated to ascertain whether their performance is sufficient for their proposed use. We evaluated the performance of TUBEX® TF with respect to blood culture in diagnosing enteric fever.
The sensitivity of TUBEX® TF in our study was 41.86%. This is lower when compared to a sensitivity of 60% in a study in Bangladesh and sensitivity of 76% from a study in India.17,18 In our study, the PPV of TUBEX® TF at 31.58% was significantly lower than the PPV of 90% in the study from Bangladesh.17 A study from Egypt showed a PPV of 89.2%, that was again higher compared to our study.19 The specificity of TUBEX® TF in our study was 95.79% which was again low when compared to 96-99% from the Indian study18 and higher when compared to 75% in a study from Egypt.18 The specificity of TUBEX® TF at 58% from a study in Bangladesh was, however, lower.13 A meta-analysis showed sensitivity of TUBEX® TF ranging from 56% to 95% with an average of 69% and specificity ranging between 72% and 95% with an average of 88%.20 In our study TUBEX® TF had a NPV of 97.26%, which is very high when compared to the NPV of 58% from the studies conducted in Bangladesh and Egypt.17,19 As evidenced from the high NPV, TUBEX® TF test was being advised inappropriately in many situations where the pre-test probability was already low, in direct contradiction to the advice from the manufacturers.
TUBEX® TF detects IgM antibodies against salmonella typhi O9 antigen; however, it has displayed positive results in salmonella paratyphi. This has been observed in other studies too and is attributable to cross-reactivity between the different antigens.21
This characteristic may also be responsible for positive TUBEX® TF results obtained in cases where other organisms were cultured and requires further investigation.
The time elapsed between the onset of symptoms and collection of samples can significantly impact the result of antibody-based tests. This factor was not considered in our study as the tests were performed as soon as the patients presented.
Furthermore, the impact of prior antibiotics use on organisms\\\' detection in blood cultures and the results of antibody-based tests were also not considered in our study. This is important in that blood cultures become negative while the antibody-based tests may still remain positive in patients who have taken antimicrobial agents prior to presenting to our hospital. This factor also needs further investigation.
Rapid diagnostic antibiotic tests including TUBEX® TF and Typhidot are being utilised extensively in prevalent studies.22 Such practices need to be re-evaluated as neither test has shown reliability in diagnosing enteric fever in endemic areas.23
The need for a reliable and valid rapid diagnostic test for identifying enteric fever cannot be denied. And in view of growing resistance, the importance of antibiotic sensitivities from blood culture cannot be replaced. Such low sensitivity and positive predictive value however do not justify its routine use in clinical care settings.

Both the sensitivity and positive predictive value of TUBEX TF were found to be poor in our study. Hence we discourage its widespread use as point of care rapid diagnostic test. Use of blood cultures, though time-consuming, is the universally practised diagnostic procedure for typhoid and para-typhoid fever, because other methods are either invasive, have failed to prove their utility, or are expensive. There is, however, a dire need of reliable, easy and affordable rapid diagnostic test for enteric fever.

We are thankful to Northwest General Hospital and Research Centre, Peshawar, Pakistan, for providing ethical approval. Thanks are also due to the information technology department and laboratory staff.
Disclaimer: None.
Conflicts of Interest: None.
Source of Funding: None.

Amplification of Mitochondrial DNA for detection of Plasmodiumvivax in Balochistan