Idiopathic Myelofibrosis is a rare myeloproliferative disorder. In children, it becomes even rarer. Herein, we report a case of idiopathic myelofibrosis of a 6-year old male patient who presented with complaints of pallor, petechiae and bleeding from gums. Bone marrow aspirate showed afragmented haemodiluted smears with erythroid and myeloid precursors scattered throughout. Trephine biopsy showed increased background fibrotic activity along with clusters of histiocytes. A diagnosis of paediatric primary myelofibrosis was made on biopsy. The patient also developed a stroke that resulted in left-sided hemiparesis. An MRI suggested an intraparenchymal haemorrhage along with meningeal extramedullary haematopoiesis.
Keywords: Paediatrics, Primary Myelofibrosis, Acute Stroke.

Myelofibrosis in children is a rare disorder.1 Primary or idiopathic myelofibrosis is even rarer in paediatrics, and either isolated cases or small series of cases can be found in literature. Amongst all the chronic myeloproliferative diseases, primary myelofibrosis is the least common.2 The characteristic signs of this disease include bone marrow fibrosis, anaemia, splenomegaly, bone pain, night sweats and tear drop cells in the blood film. Other pre-existing conditions e.g. chronic renal failure, chronic infections and primary bone malignancies should be excluded in order for it to be labeled as primary or idiopathic. Herein, we report a case of idiopathic myelofibrosis involving a 6-year old male patient.

A 6-year old male child presented to Paediatrics Department of Civil Hospital, Karachi in 2015 with complaints of pallor, mucosal bleeding and petechiae. The patient had presented 5 years ago with similar symptoms. There was no visceromegaly on examination. CBC had revealed thrombocytopenia and mild anaemia. Other causes of thrombocytopenia were investigated: HIV screening and ANA test for SLE came back negative and these were ruled out. Chromosomal breaks for Fanconi anaemia and work-up for Haemophagocytic Lymphohistiocytosis (HLH) were also negative. Bone marrow aspirate and trephine biopsy revealed normal cellularity and normoblastic erythropoiesis and there were no extramedullary cells. Patient was consequently treated as a case of chronic ITP with IVIG and steroids in spite of which the patient continued to present to the OPD with similar symptoms and intermittent symptomatic relief for a brief period of time before being lost to follow up.
The patient on his visit in 2015 presented with history of low-grade fever on and off. He was pale. Massive hepatosplenomegaly was found on examination, while lymphadenopathy was absent. Complete blood count (CBC) showed anaemia and thrombocytopenia due to which patient required transfusion of platelets and packed cells on and off. Ultrasound of abdomen was repeated which revealed massive hepatosplenomegaly. The rest of the ultrasound was normal.
Bone marrow aspirate and trephine biopsy was repeated. Bone marrow aspirate showed afragmented haemodiluted smears with erythroid and myeloid precursors scattered throughout. Trephine biopsy showed increased background fibrotic activity causing streaming of cells and distortion of morphology; increased vascularity along with clusters of histiocytes were also seen. Megakaryocytes exhibiting variable size and atypia (ballooning and clouding) were seen present in clusters (Figure-1). 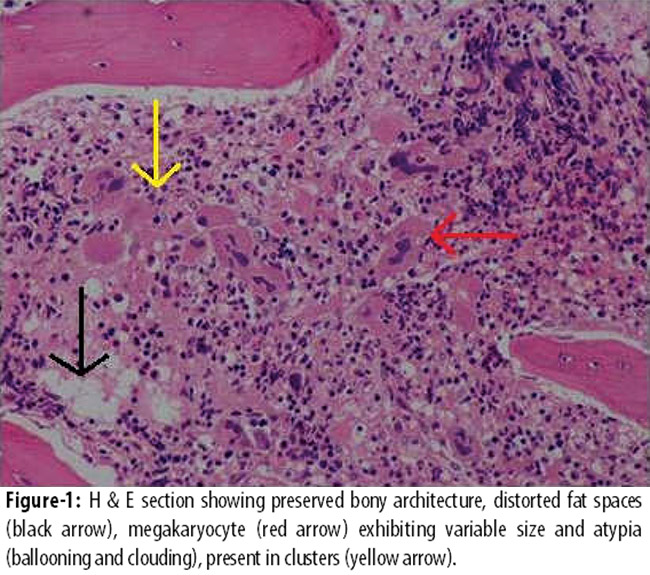 Diffuse and dense increases in reticulin with extensive intersections were seen and no evidence of parasite, granulomas or infiltrative disorders was found. These findings were compatible with idiopathic myelofibrosis. We were unable to do a cytogenetic analysis as the facility was not available to us. While the cause of myelofibrosis was being evaluated, the patient had an episode of loss of consciousness. Upon regaining consciousness, the patient had developed left-sided hemiparesis.
An MRI of the brain showed multiple focal areas of abnormal signal intensity within the right frontal and temporal cortex, medial parietal cortex, basal ganglia and the insular cortex region. On post-contrast study, a non-homogenous enhancement was seen in the right lateral ventricular region extending into the parasellar region on the right side (Figure-2). 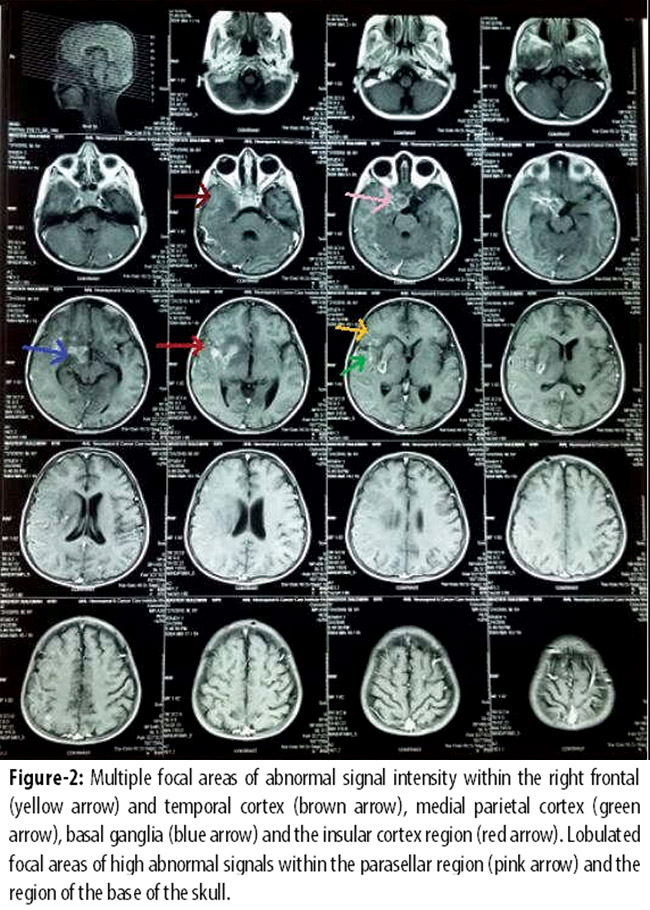 These changes were suggestive of an intraparenchymal haemorrhage with associated meningeal extramedullary haematopoiesis as there were lobulated focal areas of high abnormal signals within the parasellar region and the region of the base of the skull as well. The patient expired before any therapeutic intervention, due to an intracranial bleed most likely secondary to thrombocytopenia or thromboembolism.

The name Chronic Idiopathic Myelofibrosis was last used in the 2001 WHO classification, the disorder now referred to as Primary Myelofibrosis is extremely rare and there have been less than 50 cases reported till date.3 Paediatric myelofibrosis is more commonly seen in patients under the age of 3 and a female predominance is seen in the ratio of 2:1 as compared to males. An association of these younger patients with rickets, Down\\\'s syndrome, or a familial type of myelofibrosis has often been reported.1 The index case is interesting as it was found in a 6-year old and there was no underlying cause. There was an association with acute stroke due to thrombocytopenia. Extramedullary haematopoiesis in the meninges was also considered in the differentials of the MRI findings.
The initial disease process in Primary Myelofibrosis is a disorder of the clonal haematopoietic stem cells that leads to chronic proliferation of the myeloid cells along with atypical hyperplasia of the megakaryocytes. This is followed by proliferation of non-clonal fibroblasts and abnormal shedding of growth factors from clonally expanded megakaryocytes which induces hyperactivity. These result in the secondary process of bone marrow fibrosis. Bone marrow fibrosis which impairs the normal haematopoietic process causing severe anaemia is the hallmark of Primary Myelofibrosis.4
These findings were observed in multiple paediatric idiopathic myelofibrotic patients in an extensive study by Delario and Sheehan comprising 19 children followed over a period of 30 years.5 The findings of hypercellularity (95%) and megakaryocyte hyperplasia can also be seen in the index case. Collagen fibrosis was also observed in most of the patients in the study, though not as severe as that in adults- this finding is also seen in our case. Significant osteosclerosis was not observed in any of the patients in the study however focal bundles of osteosclerosis were occasionally seen in the reticulin stain of the index case. Another common finding- megakaryocytic dysplasia was seen in many patients in the study as well as in our patient.5
Clinical features of the disease include anaemia, extramedullary haematopoiesis (EMH), splenomegaly, cachexia, constitutional symptoms and shortened survival.6 Most of these features were present in our patient in addition to mucosal bleeding and petechiae. Evidence of meningeal extramedullary haematopoiesis as evidenced by the MRI, which is a rare phenomenon in patients with idiopathic myelofibrosis was also seen.
Patients suffering from myelofibrosis have few therapeutic options that include cytoreductive agents, mainly hydroxyurea; management of splenomegaly by splenic irradiation and splenectomy; and treatment of anaemia using erythropoiesis-inducing agents, transfusions and androgens. Immunomodulatory agents such as thalidomide and lenalidomide in combination with steroids have also started being used. Allogenic stem cell transplantation (ASCT) is the only curative choice available, however it is associated with increased mortality and morbidity risks.7
Primary Myelofibrosis in children may be fulminant in its acute form. Life expectancy is usually less than 1 year if not treated effectively. The course of the disease may occasionally be more indolent in children as compared to adults where the patient may live for many years on being given just supportive care8 or evolve into acute lymphoblastic leukaemia.9
Our patient had a poor outcome which can be attributed to a late diagnosis and a lack of follow up. A trephine biopsy at an earlier stage could have given the patient a better chance of survival. We believe that a yearly bone marrow biopsy should have been repeated in the absence of satisfactory clinical improvement.

This case illustrates the importance of suspecting primary myelofibrosis in a child presenting with hepatosplenomegaly, progressive pallor, and mucosal bleeding after secondary causes have been ruled out and a confirmation is made on bone marrow biopsy.
Consent: Informed consent was obtained from the patient\\\'s parents to reproduce her case in this report.
Disclaimer: The abstract has not been presented or published in any journal or conference.
Conflict of Interests: None to declare.
Funding Disclosure: None to declare.